Amphibia has returned for its third season, and immediately jumps into where season 2 left off. For those that don’t recall, you can check out what happened in the finale here, but quickly…deep breath…we find out that Marcy betrayed Anne and Sasha, King Andrias betrayed everybody, Marcy might be dead, we thought Sprig was going to die, Polly sprouted legs, Anne has mysterious blue glowing powers, and King Andrias opened the portal and sent Anne back to Earth with the Plantars. 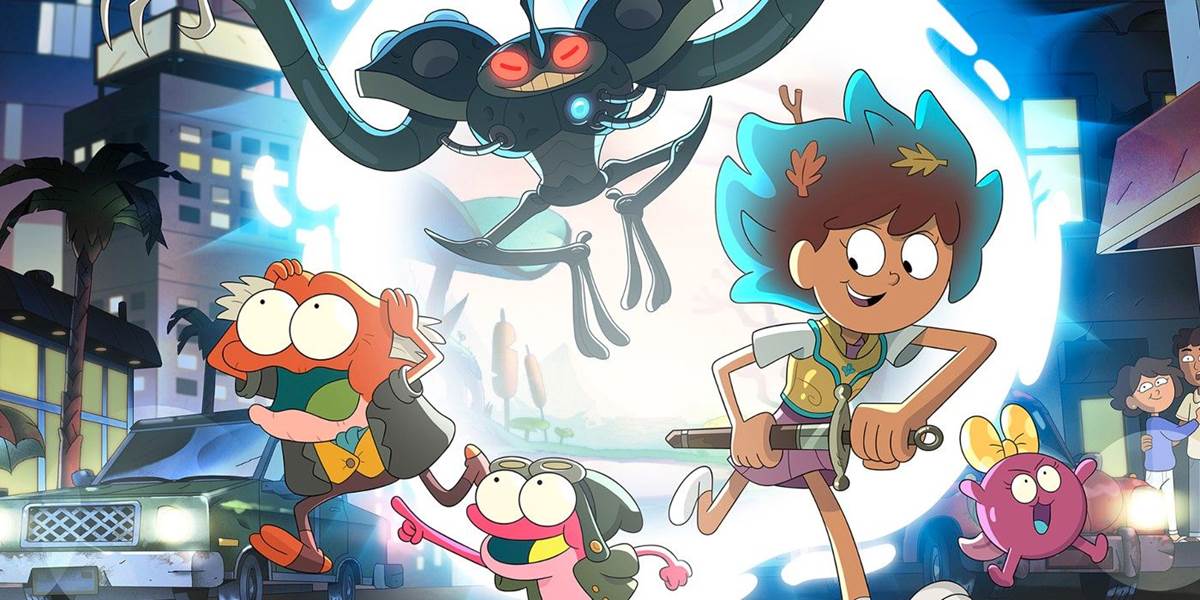 So now, we find Anne and the Plantars beamed back to Earth and the Human world and caught in the middle of traffic. Overwhelming for even the most experienced Earthlings. The group heads back to Anne’s home where she knows she must ease her parents into the large talking frogs and everything that has happened. But the Plantars inadvertently destroy that plan.

Hop Pop introduces himself, Polly is showing off her new legs, and Sprig jumps in and eats a fly right in front of her parents. Anne’s dad faints, and mom doesn’t believe her eyes, and the family quickly goes inside to explain everything as quickly as they can. Even Anne’s dad points out it would have been great if they could have been eased into that. Sorry, Hop Pop. 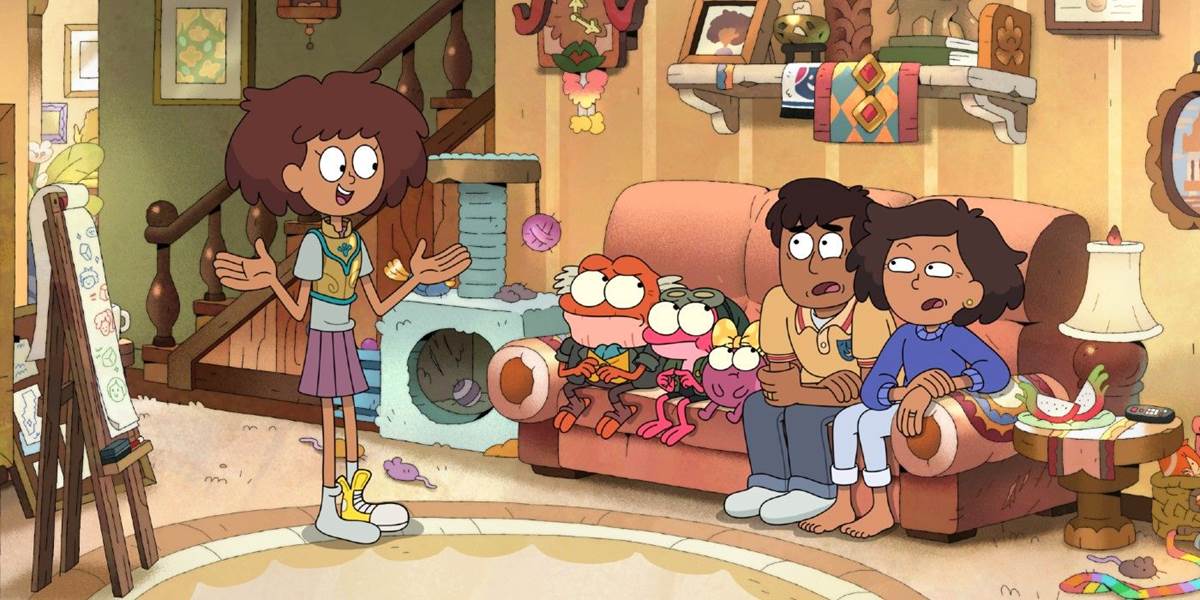 After the whole story, Anne’s parents are glad to have her back and say she can visit her friends with the authorities. They can’t do that though, because Anne knows that the government will only poke, prod, probe and dissect the creatures. So they’re allowed to stay, but they have to go under lockdown and aren’t allowed to leave the house. Cue topical Quarantine song!

Anne realizes that her parents are being extremely overprotective, and asks to go with her parents to the market, even coming up with clever disguises for the family just to get them out of the house. They reluctantly agree, and the group heads out to the market. Excitedly, Anne is explaining to the Plantars that this is going to be great, and they don’t even have to worry about something trying to kill them for once.

Back in Amphibia, King Andrias is sending out a robot to acquire the energy signature of Anne, sending it through the music box to Earth to eliminate her (and acquire the latest installment of “Cynthia Coven”). We also see (something we also saw in this season’s opening titles) Marcy hanging in some sort of life support chamber when he says she’s already important to what’s about to happen. Likely meaning later in the season.

At the grocery store, Anne is responsible for the Plantars, impressing her parents with her new level of maturity. Anne introduces the Plantars to several foods, like durian and noodle dishes, and tries to convince Sprig that not everything is a robot when a giant stealthy robot tries to attack Anne and the Plantars in the middle of the store.

Knowing they’ll never be allowed out of the house again, Anne and the Plantars come up with some stealth of their own, cranking up angry rock music in the store to ensure nobody hears the noise they’re making. The group takes on the robot, throwing flour at the creature so it’s always exposed. However, as they are fighting, Anne realizes that the robot doesn’t want to be seen by anyone else either as it hides on a shelf when another customer walks by. 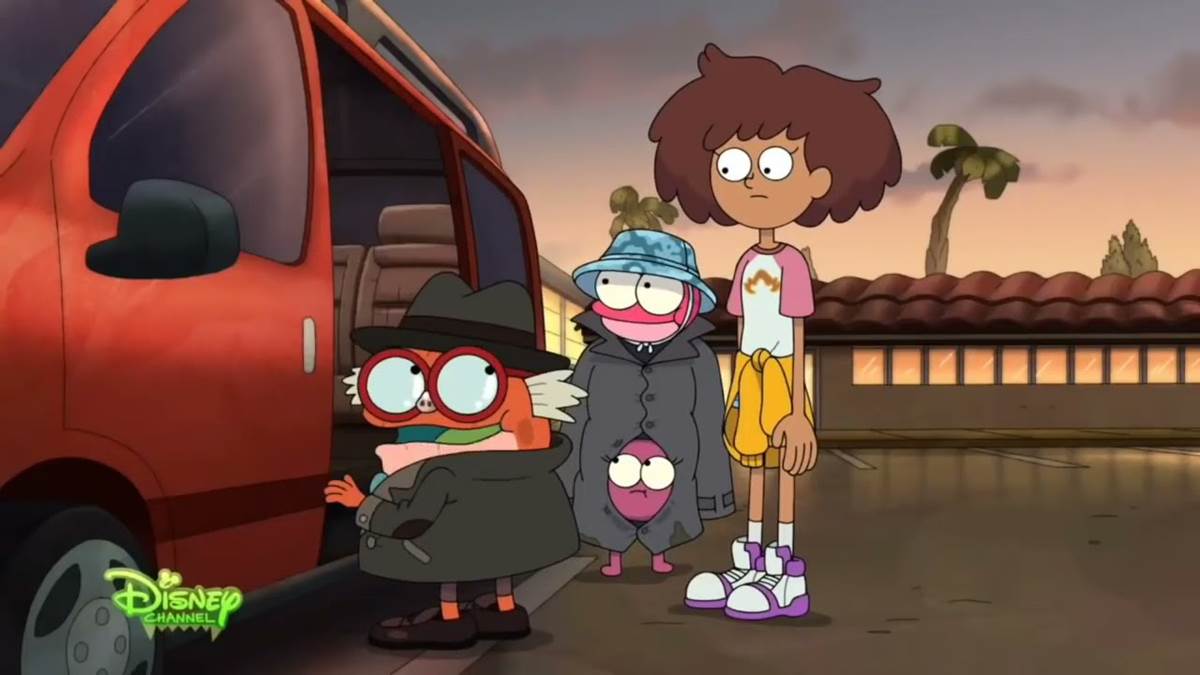 The group finds themselves luring the robot into a freezer where the Plantars are immediately frozen into ice cubes (that pesky amphibian body temperature problem), and Anne is all but alone fighting the robot. As the robot turns to harm the Plantars, her new blue glowing powers activate and she protects them, causing serious damage to the robot. The bot leaves the freezer and escapes into hiding while the Plantars melt into freedom, impressed by the powers, as Anne faints. The powers seem to take a lot out of her, and she even says that she should avoid using them unless she has to, and that using them just feels bad.

Anne’s parents show up and say how impressed they were with Anne, with her ability to take care of the Plantars (completely unaware of the whole robot situation that just happened) and say they’re going to go out for dinner. Polly points out that Anne does have a lot on her plate, and Anne says not much just: Making up with her best friends, finding a portal back home to rescue her best friends, defeat Andrias, save Amphibia, and keep the Plantars safe while they’re on Earth. I think I listed them all, there were a lot, and a lot more that I’m sure we’ll see through the season.

Atop a nearby skyscraper, we see the damaged robot attempting to heal himself, so we know that Anne and the Plantars aren’t the only thing on Earth from Amphibia right now, and he will likely come in to play in the story at some point in the near future.

The season premiere of Amphibia is available now on the Disney Channel and the DisneyNOW app. You can also catch up with the previous seasons on Disney+.