While many fans of Amphibia were expecting the season finale, “True Colors,” to be more about the anticipated betrayal by Sasha Waybright, we got more than we anticipated and some pretty decent cliffhangers that have us looking forward to the third season of the Disney Channel series. 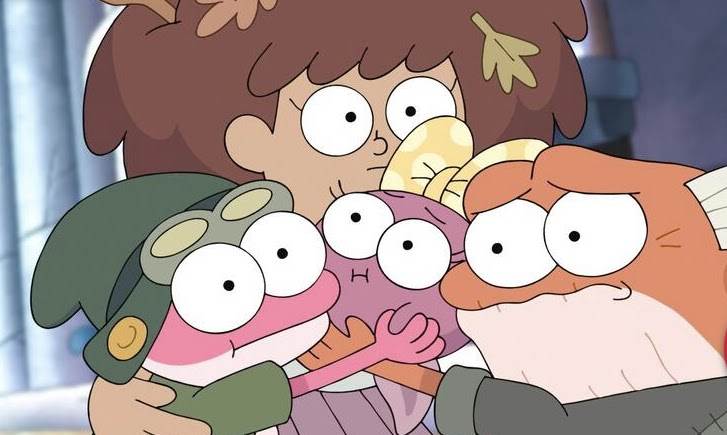 After an unexpected delay, the season finale of Amphibia has finally debuted and fans of the popular Disney Channel series will not be disappointed. The first indication that this is something different than we might have grown accustomed to with the series begins at the very beginning, as a voiceover by Sprig and a disclaimer screen saying that some of the scenes in the episode are intense and might be scary for younger viewers.

The time has come and Anne, Marcy, Sasha, The Plantars, Grime, and Frobo are all headed to King Andrias in Newtopia to open the music box and go back home to their human world. Regular viewers of the series know that there are a lot of moving parts that are all building up to this episode, including Frobo’s mysterious origins, the impending Toad rebellion led by Sasha and Grime, and most importantly, a not fully charged second stone in the calamity/music box. Remember?

The episode opens with a flashback scene of Marcy at a library where she finds a book describing the calamity box, and then later at home saying her parents are ruining her life (likely due to them telling her they are moving) and she runs out and comes across a storefront where the calamity box is on a shelf. She sends Sasha a picture of the box saying it might be the perfect birthday gift for Anne.

We then see the crew on their way to the king, and just as the gang is about to hand the box to the king and send the girls home, Grime launches his toad tongue and wraps around the box bringing it to him and Sasha who take control and hold the king in the dungeon, who nods to Marcy along the way, signifying something is afoot. Anne is obviously furious with Sasha who has betrayed her yet again, and Sasha threatens to send her home and away from her precious frog family, but opens the box to no avail, and settles on just sending them to the dungeon too since they refuse to help her and are “no longer friends.”

As they are being escorted away, Anne’s rage finally builds to a boil and erupts and she takes charge against some toads breaking free, with the help of other Amphibia residents who were also in the kingdom, Lady Olivia and General Yunan. Marcy lays out a plan and checklist of all the things they need to do to stop the incoming Toad army (as well as Sasha) and Anne and the gang set off to stop them.

Back in the castle, Grime is giving a special gift to Sasha, showing their tight bond while Sasha is confused about what she wants and is also hurt by Anne’s comments calling her a horrible person. Grime, trying to distract her from her thoughts, says they should redecorate and begin tearing down tapestries throughout the castle, revealing murals of the king with the music box somehow taking over the world. Grime even says out loud, “It’s a REALLY good thing we stopped him.”

Sasha and Grime see Anne and the Plantars efforts to stop them and now try and stop her, not because of their Toad Rebellion, but now to ensure the king doesn’t get the music box. Of course, Anne doesn’t believe Sasha and duels begin both between the two girls, as well as Sprig and Grime. The gates to the castle are shut, thwarting the toads, and Hop Pop emerges with King Andrias. Sasha sees this from afar, and just says “Oh No” before we cut to the inevitable commercial.

We return to see Anne handing over the music box to King Andrias with Sasha (who is cuffed and restrained) shouting at her not to before Yunan covers her mouth with her tail. The King then says that he’ll send the girls home in due time, but first, his little secret. In previous episodes he has said his people were frail explorers, but glorious conquerors. He explains that  Newtopia was truly great but it all ended because of him and someone took the music box on his watch, and now 1000 years later, Newtopia will be returned to glory. As he sets the music box on it’s pedestal, the castle lifts into the sky, and the construction of giant robots, like Frobo, resumes, and begins to populate the area. Andrias also shows the girls the power he now holds and starts blowing up towers from afar before King Andrias reveals Marcy’s biggest secret, that her parents were going to make her move and she got the music box to get them stranded in Amphibia on purpose because she didn’t want to be alone. She told Anne that she was the one that gave her Sprig, gave her everything.

The entire crew gangs up together to take on the king and his robots. The King is about to step on and crush Polly, (an odd throwback I enjoyed because King Andrias is voiced by Kieth David, who voiced Dr. Facilier in The Princess and the Frog) before Frobo comes in and saves her. The king points out that one of his robots is clearly defective and destroys it. Polly screams for him and the king says not to worry, she is next, and we see his fist pile drive into the ground. Polly, who has been complaining about itching the whole episode, sprouts her legs and jumps out of the way. Using her new legs, Polly runs and steals the box off the pedestal, powering down the castle-ship. The king says this ends now, and is holding Sprig in his giant hand out the window, threatening to drop him if they don’t replace the box. Anne pleads to save her friend, and the King says that’s the thing about friends, “the more you love them the more it hurts when you let them go” and drops Sprig out of the window.

We see a flashback of memories of Sprig that Anne has as we see the frog plummeting to his doom, and as her tears begin to pour, the second stone on the box begins to flicker as Anne’s eyes glow blue. The King points out that it can’t be, that she is still connected to the stone (that was never fully charged) and is now this mystical aura. She passes out, unable to control this new power. While all this happened, Marcy jumped out the window and called for Joe Sparrow, together saving Sprig, and Marcy steals the music box and opens a portal pushing Anne and the Plantars (and Frobo’s detached head) through it, and as their faces can still see Marcy through it, the King runs his sword through her as the portal closes and they see Marcy fade away before they end up in a crazy automobile and traffic filled world with a large sign that says “Los Angeles.” The Plantars are terrified and ask where they are. “Home” is all that Anne says as “End of Part 2” is shown at the bottom of the screen.

After the somber tone of the credits, another screen shares “This is far from over, this is only the beginning.” Channeling a reference that extends beyond the target demo for this show, I got real Escape From the Planet of the Apes vibes as the Plantars are now placed in the present day human world with Anne. After that screen, we got to see a new opening sequence for the show showing the Plantars at Anne’s house in the human world, the new mystical power that she possesses, Sasha leading armies with Grime, the implication of the king as the new main villain, and Marcy in some sort of life support chamber.

As is the case with all season finales, now we wait for the return of the series, but for now you can watch this episode of Amphibia on Disney Channel and the DisneyNOW app, along with the rest of Season 2. You can go back even further and enjoy season one on Disney+.