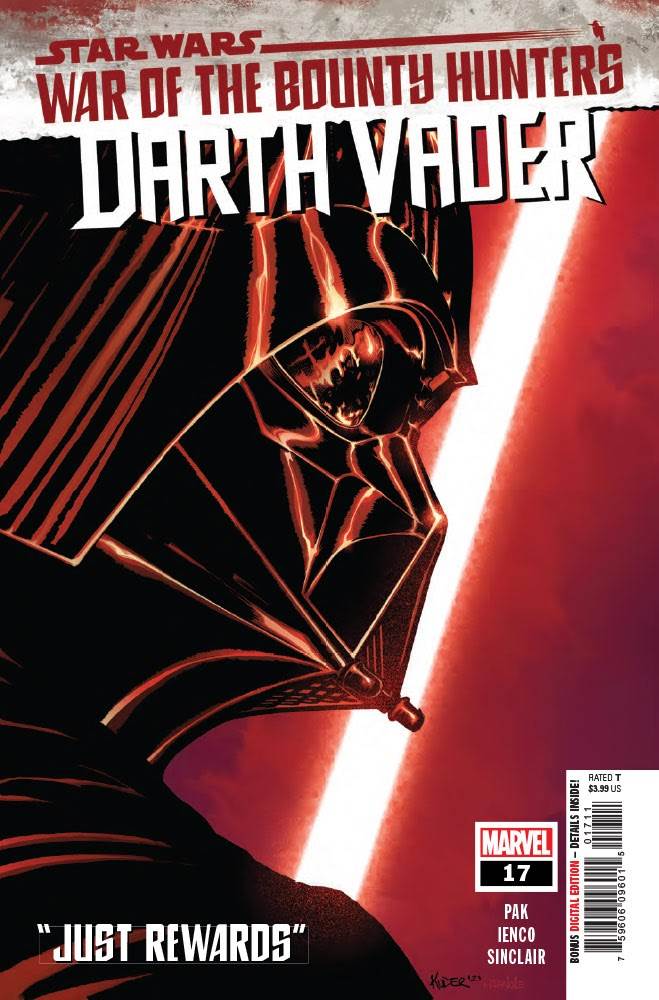 There are still some loose ends to tie up in Marvel’s Star Wars: War of the Bounty Hunters comic-book crossover event, and this week’s new issue of Darth Vader addresses some of them on the Imperial side.

Star Wars: Darth Vader (2020) #17 begins with the Sith assassin Ochi of Bestoon battling Umbaran Administrator Moore on the surface of the planet Jekara, where the crime syndication known as Crimson Dawn recently held an auction for the carbonite-frozen body of Han Solo. 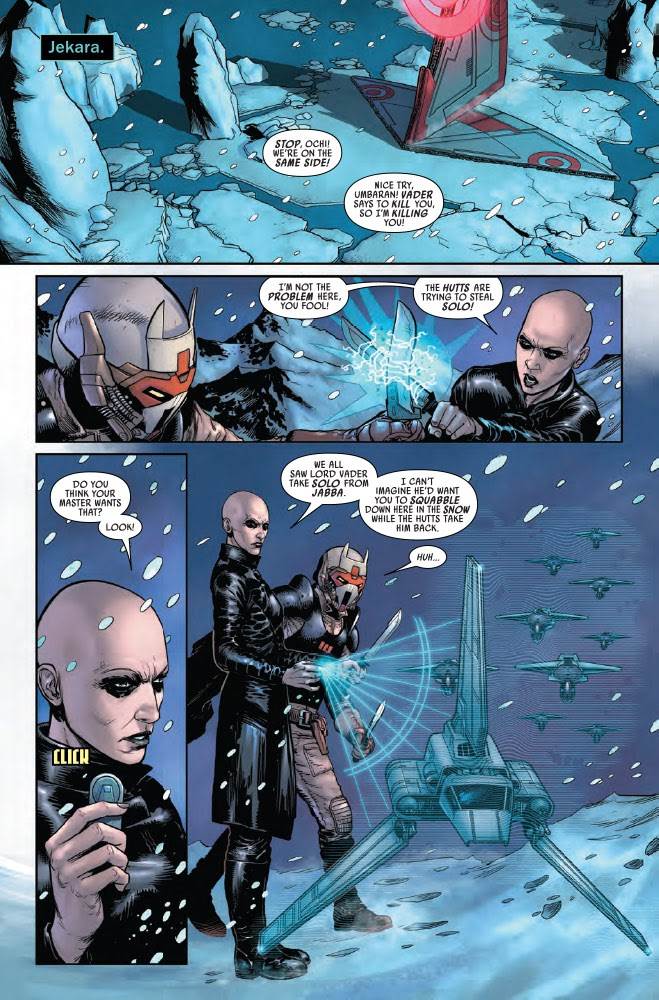 Ochi is upset that Moore betrayed Vader in favor of preserving Luke Skywalker’s life for Emperor Palpatine, but they’re both quickly distracted by the space battle raging in orbit over Jekara. The Hutt cartel has intercepted the Imperial shuttle containing that iconic carbonite block, while the Dark Lord of the Sith still pursues his son Luke in their respective starfighters. There’s some overlap here again with what we saw in the War of the Bounty Hunters miniseries, but the exciting part is getting to see more of Vader’s confrontation with the Hutts after ol’ Palpy orders him to deal with the insurgence himself. It’s a pretty gruesome massacre as Darth takes out a shipful of slugs and their Gamorrean guards with his lightsaber. And after a crash planetside that Vader somehow manages to survive, Groot-style, a showdown with Moore and a holo-transmission from the Emperor await him back on the Star Destroyer Executor. 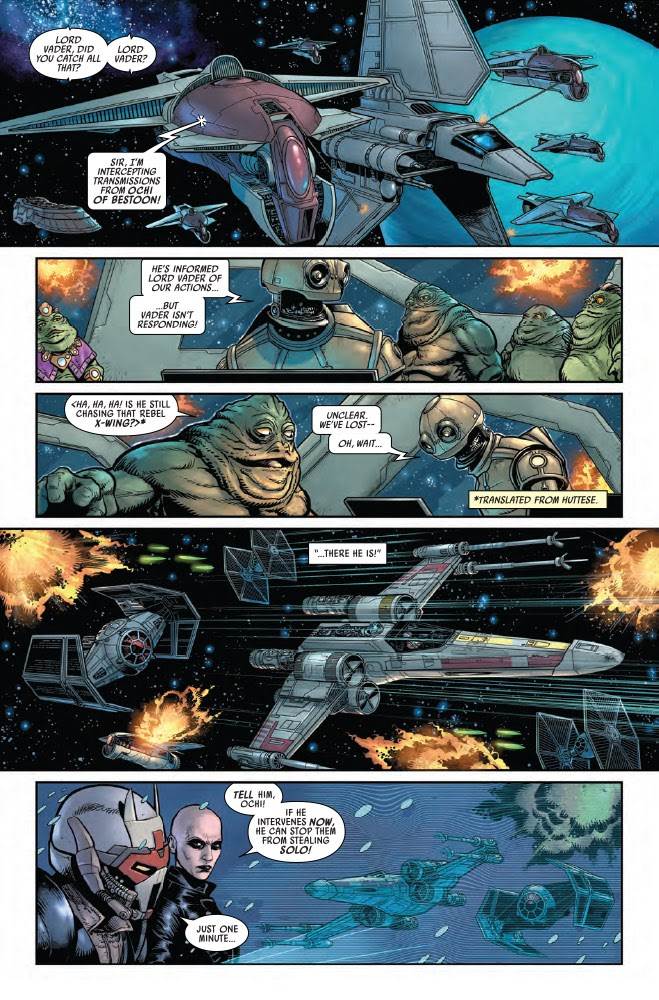 Much like War of the Bounty Hunters as a whole, the point of this issue seems to be setting up Marvel’s forthcoming Star Wars: Crimson Reign miniseries, with Ochi of Bestoon’s surprise cliffhanger ending here pointing toward his further involvement in the ongoing narrative. It’s cool to see the League of Assassins (the Star Wars one, not the DC Comics one) gathered on the planet Saki, and interesting that Palpatine is having Darth Vader amass the Empire’s forces against Crimson Dawn in this tumultuous period set before the events of Return of the Jedi. Writer Greg Pak and artist Raffaele Ienco still make for a good team, and they’ve managed to continue capturing both the voices and looks of all these characters, familiar or recently introduced. I just hope that the creative teams behind these ongoing Star Wars titles can find a way to integrate them better into the crossovers without repeating so much of the same action in the future. 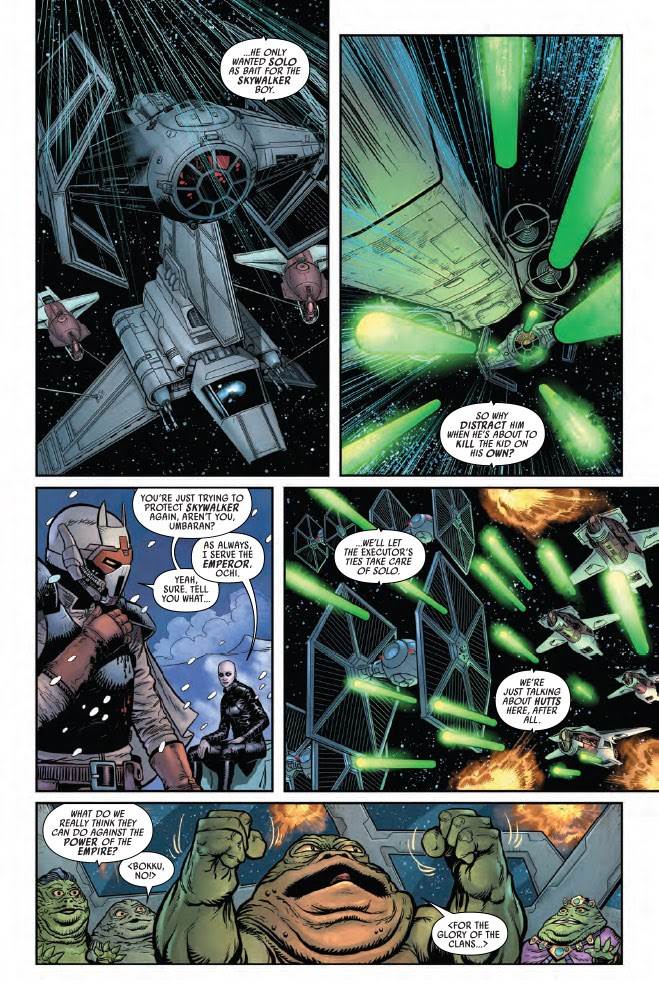