It’s Libby’s big day and Molly is out to throw her the best party, even if it’s not what Libby wants while Darryl tricks teachers into the most challenging escape room of their lives in the latest episode of The Ghost and Molly McGee. 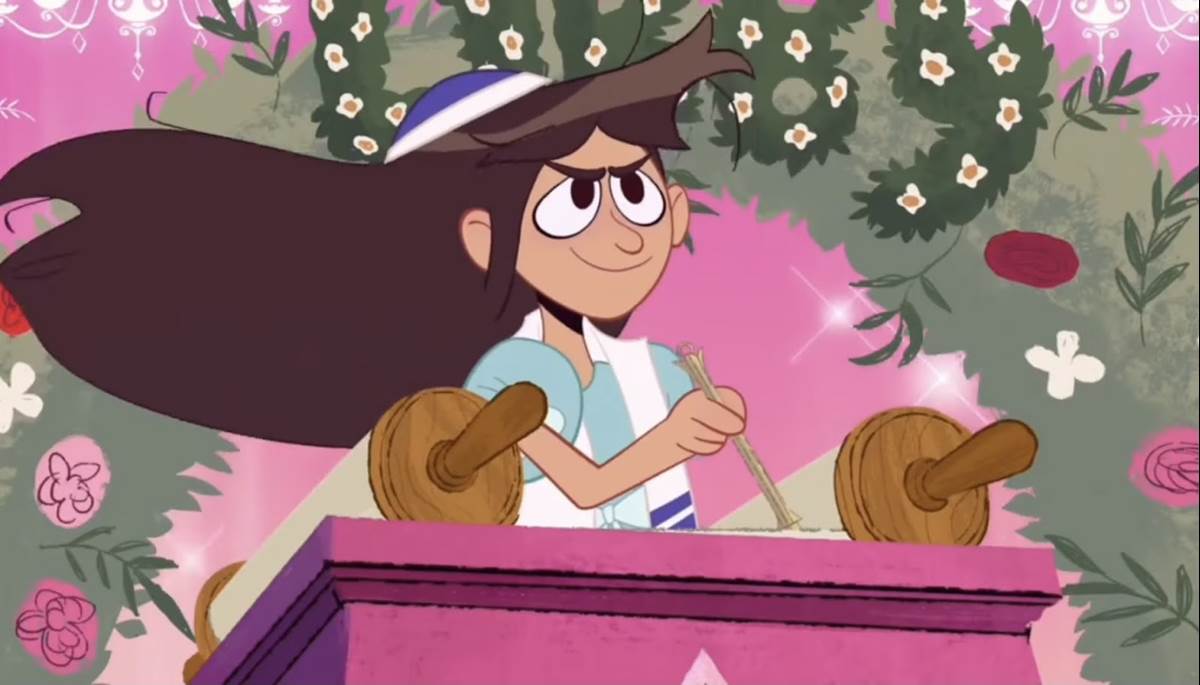 It’s Molly’s Best Friend Libby’s big day, it’s her Bat Mitzvah, and Molly has been invited to her big festivities. Not entirely sure what a Bat Mitzvah is, Molly takes to social media to do a bit of research and finds out that the celebration is similar to a quinceanera or a sweet 16, with the birthday girl going all out with elaborate celebrations. She and Scratch imagine an A-list celebration with multiple fountains of chocolate sauce and ranch dressing, only to show up and see a small, intimate family gathering.

No kids from school, no kids from the scouts, just family and Molly, and unbeknownst to Libby, Scratch. Just a heavy turtle theme. Molly overhears that the family bookstore is struggling and assumes that that is why Libby is holding back on the celebration. Scratch sees the opportunity to go all out and orders 1,000 bats (as in, the winged creatures) for the Bat Mitzvah, and uses the power of her cell phone to fill the party with guests and uses an emergency party kit she keeps on hand to throw up some decorations.

Did you know that people will join a conga line without knowing where it goes? Darryl does. Molly also takes all the bats that Scratch ordered and locks them in a nearby closet, but convinced that the party is still deader than he is, he makes several attempts to get them out.

Libby is overwhelmed and asks Molly to not leave her side, when Molly sees Scratch luring a kid towards the closet door that will unleash all the bats.

Libby clearly didn’t want any of this, and wanted to keep her celebration a small family thing, but Molly has now taken the stage to announce the hora, which Libby also does not want to participate in due to her anxiety with heights and being the center of attention.

As Molly calls her to the stage, Libby is missing but Molly soon finds her in a nearby room crying where she explains that this isn’t the party that she wanted, but has now become the party Molly thought she wanted. In true Disney Channel fashion, it turns out all Libby wanted was her best friend to be there with her on her big day with the family.

Molly realizes her mistakes, and goes to the closet door and opens the door unleashing all the bats creating chaos through the party, chasing all the guests out. Libby’s family and Molly are still there of course, and immediately get back to the small party that Libby wanted and start the turtle races she had planned.

Molly’s brother Darryl usually finds some harmless trouble in every episode, but today has commandeered a janitor’s cart and is performing dangerous stunts with it. The McGee parents are called to the office where a stack of incidents that Darryl has been involved in has earned him 6 years in detention, even though Middle School is only 3 years. The teachers can’t seem to decide what to do with Darryl and keep arguing amongst themselves not even about Darryl, but about break room salmon and other problems they have with each other.

In the car ride home, Darryl is being punished for his behavior and he asks Molly what her secret is since she has never been called to the principal’s office. Molly takes him under her wing and starts giving him niceness classes, teaching him how to care for others and give back to the community too. All to an original song of course. By the time the musical montage is over, Darryl is cleaned up and making breakfast for the family, but when they get to school, something is wrong.

The teachers are missing.

Darryl followed Molly’s roundabout lesson, and we see a low-level Ocean’s Eleven-style recap of what Darryl pulled off during the montage, wherein during a highway cleanup with prisoners, he was able to acquire orange jumpsuits that he then gave the teachers along with a forged note from the principal saying this was part of a team-building experience. The teachers climbed aboard the prison bus, which they think is part of an elaborate escape room and are now locked up, hence why they are missing.

Molly takes Darryl and sets out to right his wrongs to help free the teachers. They try to get into the prison by talking to a guard before Molly realizes that Scratch can go through walls and be able to let them in from the inside. The teachers however, still think this is an escape room, and are actually making progress breaking out of the very real prison they are in.

Scratch tries to get inside but gets electrocuted, which even though doesn’t kill him (he’s already dead, you know), definitely incapacitates him. The teachers have now escaped their cell and are making their way out, thinking it's just the intense final portion of the escape room, and use Darryl’s method of commandeering a cart and launching themselves over the fence where Molly and Darryl decided to try and dig into the prison. Seeing the Teachers launch over their heads, the two stop digging and decide to head home, when Scratch comes to and realizes he clearly missed something.

Back at the school, the teachers now get along great with Molly commenting what a great bonding experience that turned out to be for them.

But seriously, don’t trick teachers into going to prison, and also, don’t try to escape from prison if you find yourself there. It probably all won’t magically work out in the end.

This episode of The Ghost and Molly McGee is now available on Disney Channel and the DisneyNOW App. You can also watch earlier episodes on Disney+.