October has brought the release of two books as well as details about upcoming titles and updates about big screen adaptations of Rick Riordan and Rick Riordan Presents books.

Daughter of the Deep may have been delayed in North America, but the latest story from Rick Riordan has finally hit the shelves on the continent. Readers will be delighted by the journey you take with Ana Dakkar as she navigates the world of Captain Nemo. 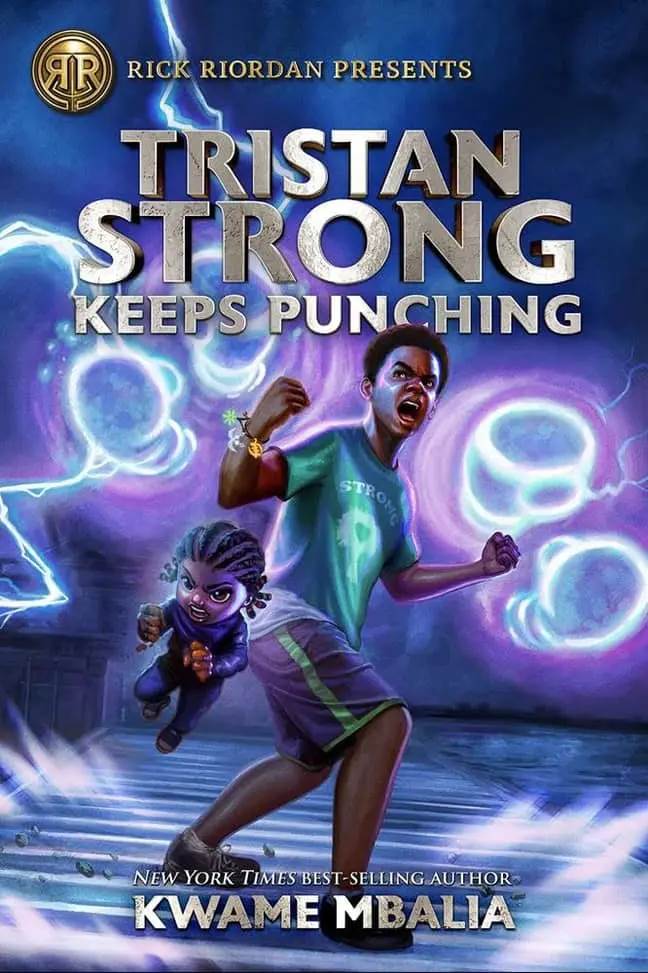 Kwame Mbalia concluded his Tristan Strong series with an epic finale in Tristan Strong Keeps Punching. The exciting final chapter in the journey of Tristan Strong will have readers on the edge of their seat rooting for their hero.

Graphic novel versions of Aru Shah and the End of Time and Tristan Strong Punches a Hole in the Sky are set to be released in March and May of 2022.

Sarwat Chadda’s City of the Plague God will continue with the sequel Rise of the Chaos Goddess coming in the spring of 2023.

With the success of Riordan’s latest novel Daughter of the Deep, (which I highly recommend), a forthcoming movie adaptation of the book is coming to Disney+ with Riordan and his wife Becky producing through their Mythomagic production company. Rick will also cowrite the screenplay with Aditi Brennan Kapil. Could this film lead to a spin off series? I hope so.

Development of the Percy Jackson show for Disney+ continues despite still not getting the greenlight for production. (Come on Disney give them the green light) Rick Riordan recently visited Industrial Light and Magic’s “Volume’ stage where much of The Mandalorian is filmed. Riordan states that this is not where they will be filming but they hope to use a similar technique on the Percy Jackson show.

Despite the lack of green light status, Riordan posted that if all continues to go well with the script process, the show could begin filming in June of 2022 in Vancouver (Go Canada). This is just Riordan’s speculation as it is not confirmed for certain. One thing that is confirmed is that James Bobin has been named the director of the pilot episode. Bobin recently shot the pilot for The Mysterious Benedict Society and would make a natural fit to lead the directing duties on such a complex story.

While there isn’t much new about The Kane Chronicles films at Netflix, Riordan did say that the writing process continues for the scripts and that he and their partners at Netflix are very excited for this project. One must wonder which we will see on screen first, the Percy Jackson show or the Kane Chronicles?

Nothing further has been revealed about Eva Longoria’s planned adaptation of Carlos Hernandez’s book Sal and Gabi Break the Universe. Interestingly though, a vague Twitter announcement by Sarwat Chadda about meeting with a director has me speculating that there might be a City of the Plague God film or show in the pipeline. Though Chadda would not elaborate about the context of the meeting, he did say there is a planned meeting with a production company to come.

As usual Riordan exercises caution about the Percy Jackson show and other film adaptations, but if you regularly follow Becky Riordan on Twitter, it’s clear that both Rick and Becky are hard at work on the series scripts, so I expect we will see a glorious adaptation of Percy Jackson in the year to come.

The Rick Riordan Presents authors are also getting the spotlight for incredible work that would make compelling entertainment on Disney+ or at the movie theatres. I am hopeful and optimistic by the announcements we see, and the rumors of possible adaptations that Disney will mine the talent from Disney books to create new entertainment experiences throughout the company’s multiple platforms.

Just imagine if Disney Parks were to build lands that connected with the many stories from Rick Riordan and the authors in the Rick Riordan Presents imprint. A thrill ride is just waiting to be designed that has guests joining Sal and Gabi to fix the universe.