Over the weekend, we were invited to a special, impromptu preview of the Walt Disney World Swan Reserve. This 14-story hotel, positioned adjacent to the Walt Disney World Swan and Dolphin in the middle of Walt Disney World Resort, was mostly closed but we were invited to enjoy the new VUE Room and VUE Terrace, which overlooks the vast landscape that makes up Walt Disney World. Though we only got to see this one area in detail, the rest of the resort features a captivating design offering 349 spacious and versatile guest rooms – including 151 suites – with incredible floor-to-ceiling views of the resort. This, along with its perfect location within walking distance to EPCOT and Disney’s Hollywood Studios, provides the ideal opportunity for guests to come enjoy the World’s Most Magical Celebration. While we knew we were being treated to a special preview, we didn’t quite realize how soon the Walt Disney World Swan Reserve would open, as just yesterday it was revealed that the new hotel was now open to the public. 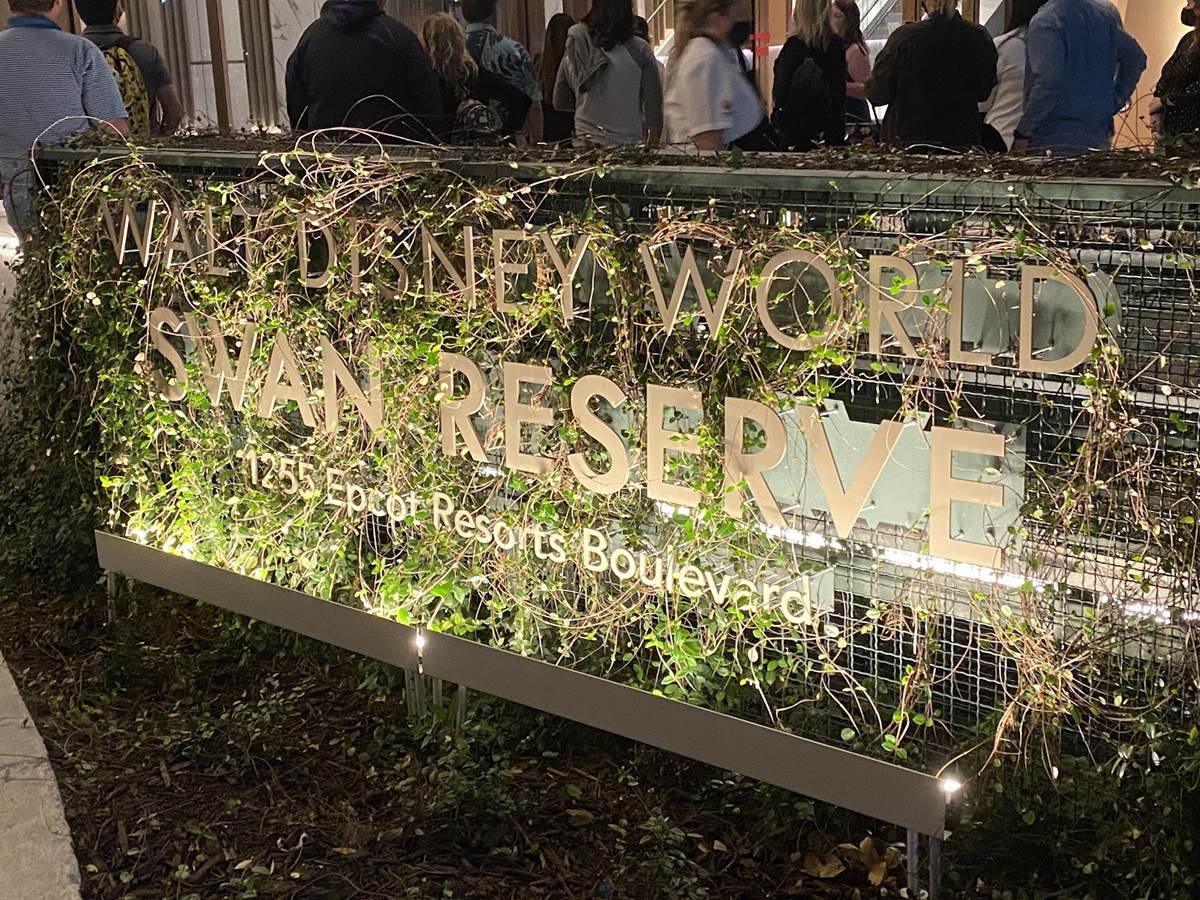 A reception desk awaits guests arriving, and they then will go upstairs into the lobby area of the new resort. Again, on our visit this area was receiving some finishing touches, so we went straight to the elevator bank on the ground level. 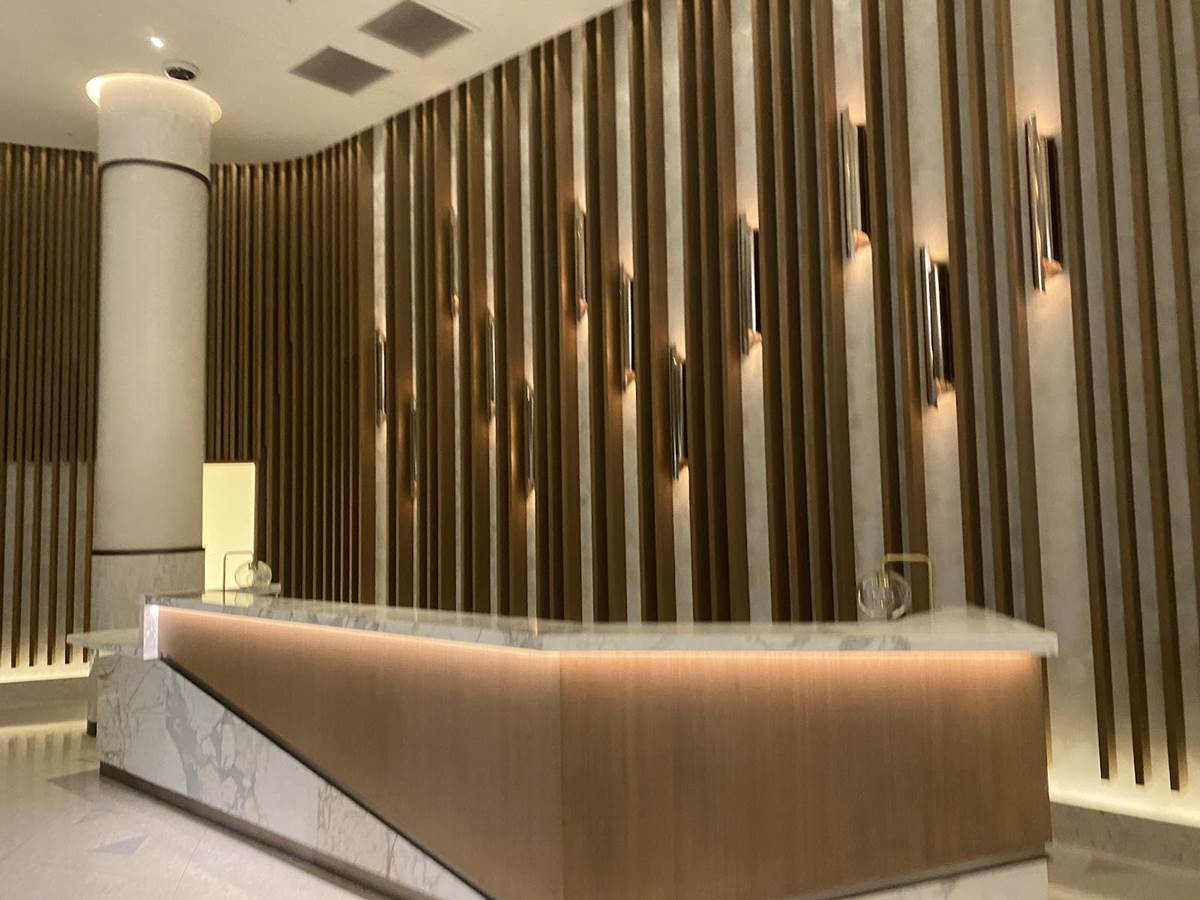 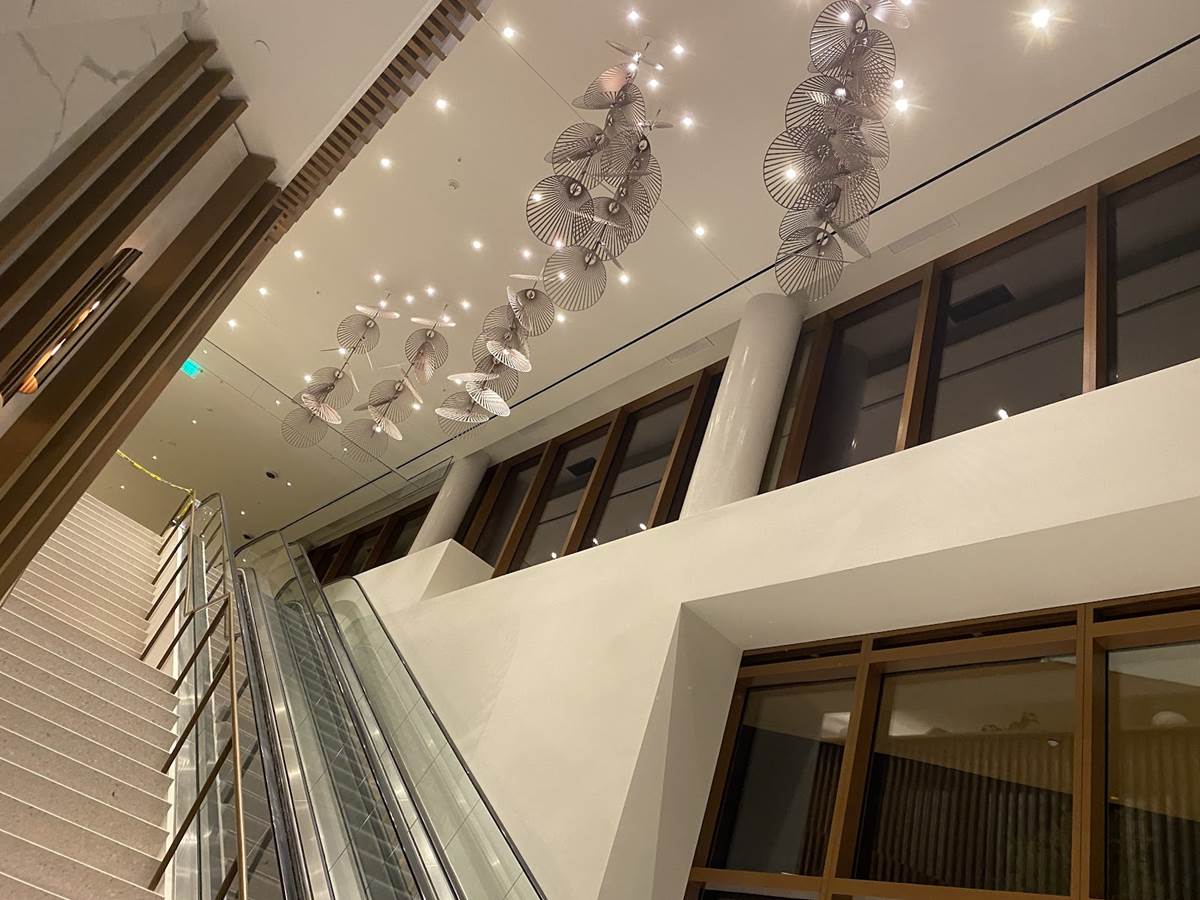 Based on the elevator guide, the second floor will offer the fitness center while the hub of activity is on the third floor, where the pool, restaurants, and check-in desks can be found. But we were there to head to the 15th floor, home to the VUE Room and VUE Terrace. 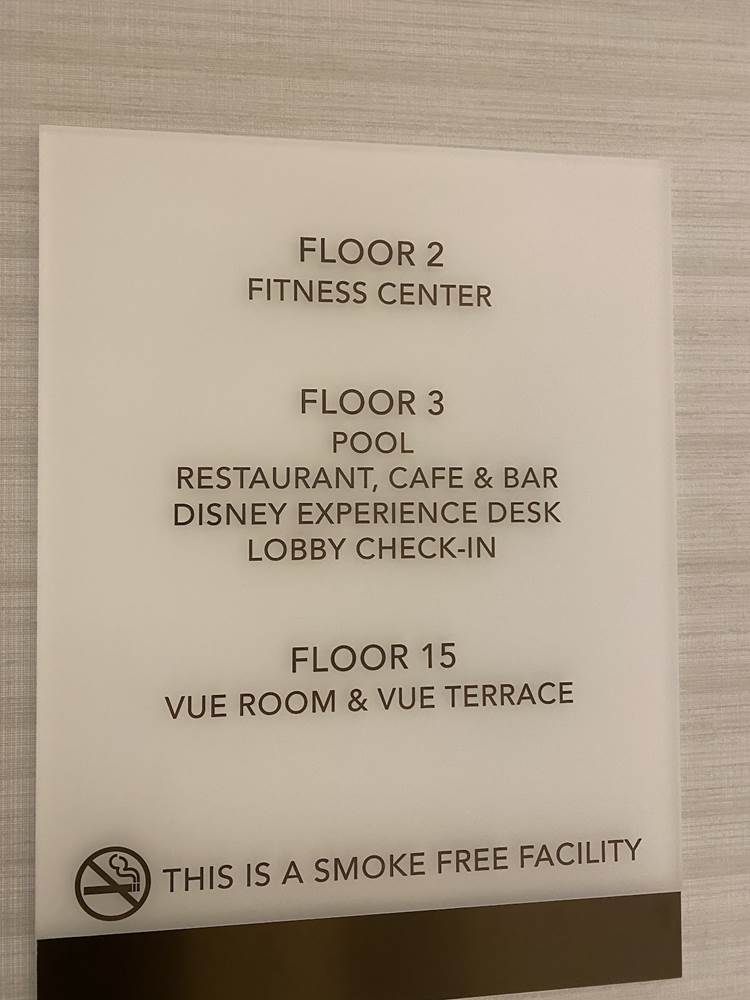 Once in the space, the tall ceilings and large windows beckon you to come gaze and look over the whole of Walt Disney World. If you’re not at the windows, the rest of the room is equally as gorgeous with beautiful chandeliers and light fixtures. After you come out of the elevator bank, you’re in a sort of lobby area that has doors that go into a modern and beautiful event space, and another set of doors will take guests outdoors and onto the VUE Terrace. Still inside, the floor-to-ceiling windows provide some of the most stunning views on Walt Disney World property. On one side you can see EPCOT and the Crescent Lake area, on another the Hollywood Tower Hotel and the landscape of Disney’s Hollywood Studios. You can also head to another set of windows and look down World Drive, spotting the Magic Kingdom, Transportation and Ticket Center, and Disney’s Contemporary Resort. 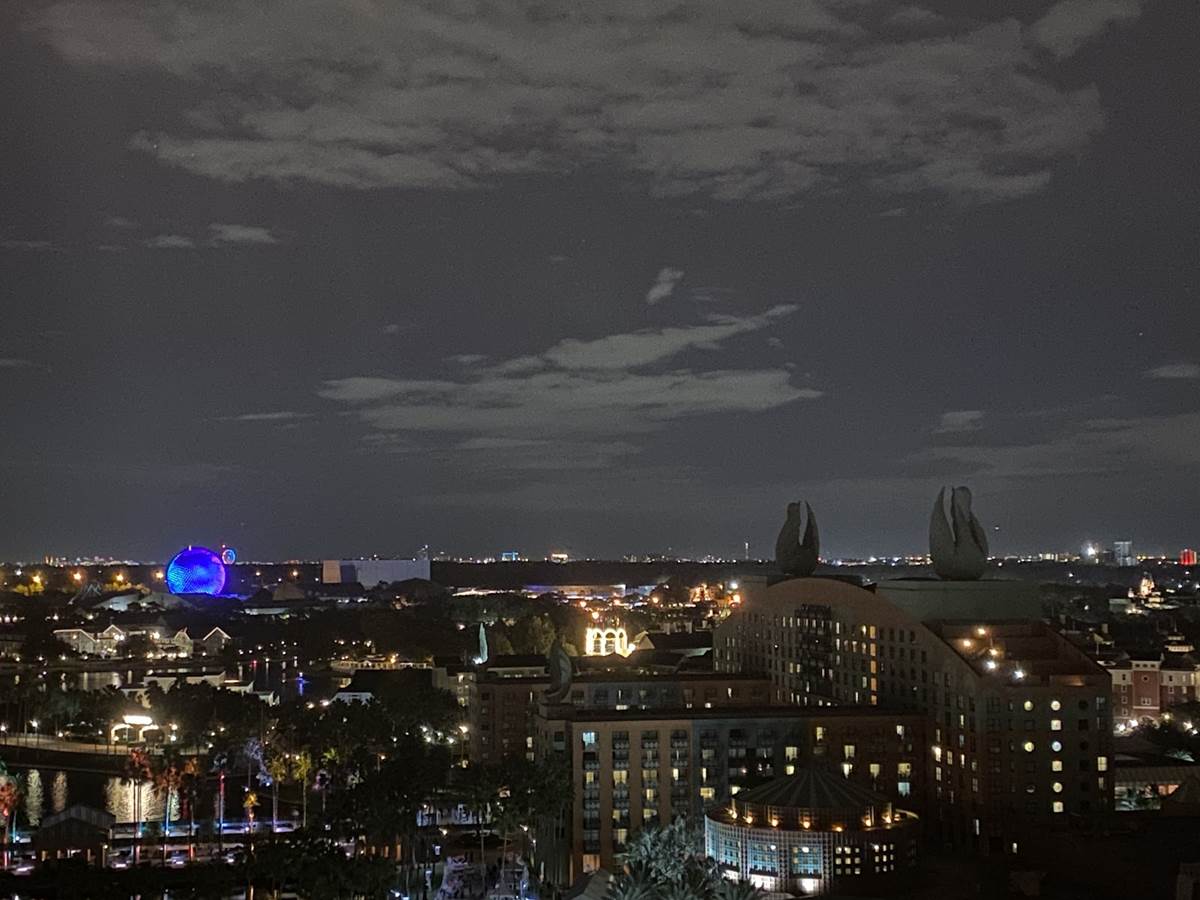 The VUE Terrace, outside, overlooks Crescent Lake, with the neighboring Walt Disney World Swan and Walt Disney World Dolphin, Disney’s Boardwalk, and Disney’s Yacht & Beach Club Resort, on the horizon. The real draw from out here is the view of EPCOT in the evening hours, where you can see the fully illuminated Spaceship Earth as the Beacon of Magic for the 50th anniversary of Walt Disney World. But the sky truly comes alive when the new nighttime fireworks spectacular at the park starts, and the VUE Terrace provides a unique view of Harmonious. You can take a look at the view of Harmonious from this new location in the video below. While music was not playing on the terrace during our preview, it was promised that the soundtrack will indeed play in this location as well.

The VUE Terrace and VUE Room are exclusive for guests of the Walt Disney World Swan Reserve. It is also an event space that is able to be booked for meetings, weddings, and other special events. The picturesque top-floor venue may not always be open to resort guests because of this, so be sure to check when you arrive. The VUE now gives the property as a whole more than 15,000 sq. ft. of meeting space, including 2 ballrooms and 12 meeting rooms and more than 13,000 sq. ft. of outdoor event space. This, combined with access to the adjacent Walt Disney World Swan and Dolphin. 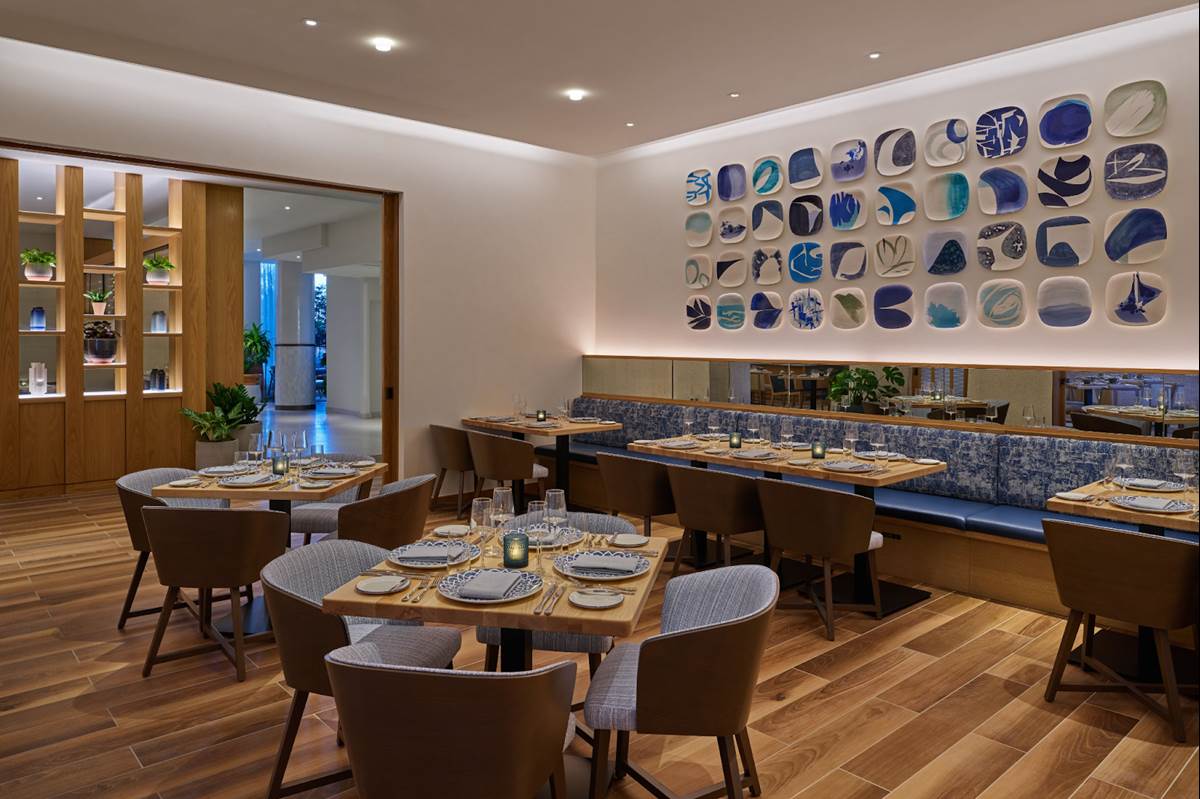 Elsewhere around the new resort, guests will be able to enjoy new offerings and amenities, including Amare, the signature Mediterranean restaurant; as well as a grab-n-go café; scenic pool area with elevated deck and fire pit; and an exciting array of Walt Disney World guest benefits. These perks include more time in the theme parks with the early entry and extended evening hours benefits. Inside and out, the hotel’s design inspiration is a bold tribute to the environment surrounding it. The exterior building design recreates the reflective light from the hotel’s scenic Crescent Lake, while the interior creates a tropical feel which intentionally blurs the lines between indoors and out, with everything from lush greenery to distinctive tropical murals on each floor. The tropical theme continues along the hotel’s exterior landscape, with orange trees lining the entryway and poolside areas, including aromatic orange blossoms and vibrant fruit, a subtle nod to the region’s citrus legacy. 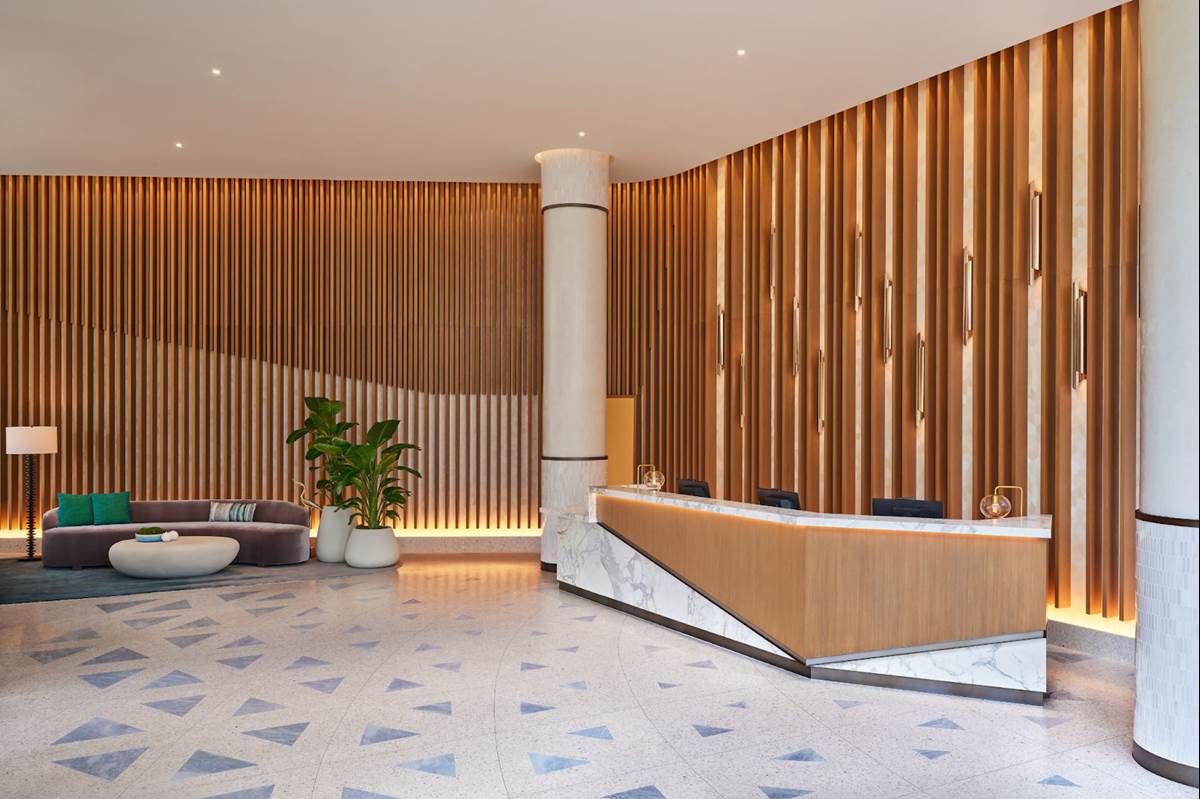 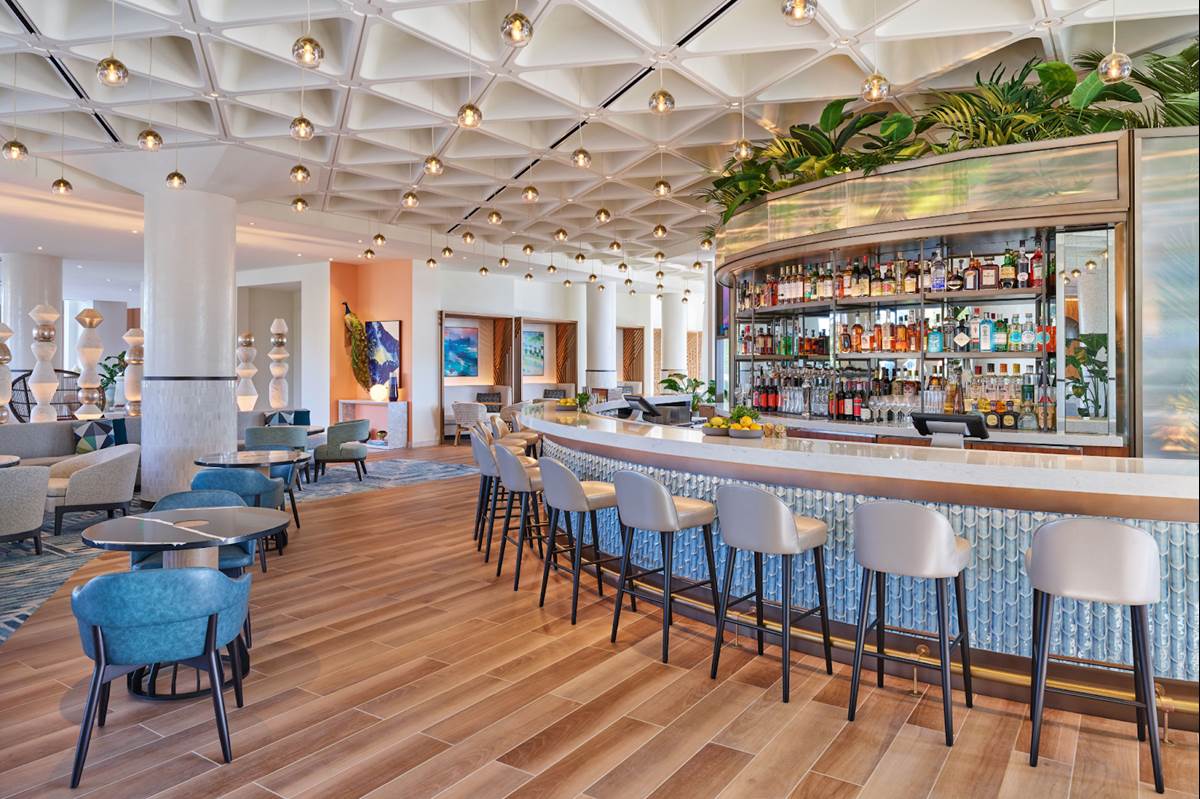 The Walt Disney World Swan Reserve is now open for all to enjoy.