Marvel’s Eternals is now in theaters and fans are buzzing about the exciting new addition to the Marvel Cinematic Universe. Even more than that though, fans are buzzing about the mid- and post-credits scenes that follow the film in typical Marvel fashion. There’s a lot to unpack in these two scenes as both set up some exciting things for the future of the MCU. Let’s take a closer look at those two scenes.

Again, as we break down these two scenes, there are obviously going to be some major spoilers here so if you have not yet seen Eternals, stop reading now! Still here? Ok, let’s do this.

The new film wraps up with the some of the Eternals venturing out into space to look for other Eternals and let them know about the truth they’ve learned. As they discuss the fact that they haven’t been able to find a single one, they are interrupted by some sort of portal that opens up inside their ship.

A small creature comes tumbling out of the portal and is eventually revealed to be Pip the Troll, voiced by none other than Patton Oswalt. That’s not the exciting part here (though I am quite excited for Oswalt’s presence in the MCU again). The real excitement comes when Pip introduces someone else: Eros! And to add some serious buzz to this scene, Eros walks out of the shadows to reveal that he is being portrayed by Harry Styles!

In Pip’s introduction, he reveals Eros to be the brother of Thanos and an Eternal, among other things. Eros, who is also known as Starfox, tells the confused Eternals that they are in for some excitement and the scene comes to a close. 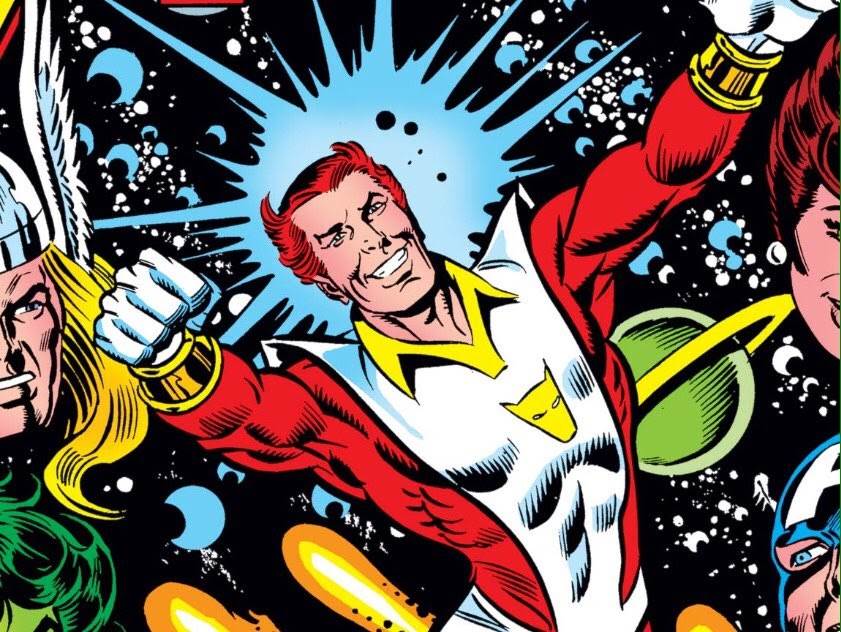 So what is happening here? Could Harry Styles really be the brother of Thanos despite the obvious lack of a family resemblance? Yes, Eros is in fact the brother of Thanos. They are also both Eternals. However, Thanos’ obvious difference in appearance is because of him being a victim of the “Deviant Syndrome,” the same thing that created the creatures the Eternals have spent centuries fighting (though the film may have changed some things on that front.)

When Thanos was born, he was immediately cast out from his family and his people on Titan. In fact, his mother even tried to kill him following his birth. Of course, Thanos has had a complicated and contentious history with his people and especially his brother. As for Eros himself, after several confrontations with Thanos, he became a space adventurer, similar to Star-Lord but almost certainly more accomplished. He eventually found his way to Earth and became an Avenger, where he was given the codename Starfox.

As for what we’re going to see from Eros in the MCU, that remains very much up in the air. There are so many big stories already on the table for our heroes and now the Eternals have just introduced another one given the rocky conclusion between them and the Celestial Arishem. Eros could be the new leader of this team, with a way for them to wage war against the Celestials.

As if that wasn’t exciting enough, the credits are followed by yet another very important scene for the future of the MCU. We once again see Dane Whitman (played by Kit Harrington) as he nervously looks at some kind of box on his desk. He paces back and forth, trying to psych himself up enough to open it.

When he finally does, we see that the box reads “death is my reward” and contains a sword. He slowly reaches for the blade as a seemingly living black substance on it moves toward his outstretched fingers. Before Dane can touch the blade, he is interrupted when a disembodied voice calls out “You sure you’re ready for that, Mr. Whitman?” and the scene comes to an end.

There’s a lot to unpack here, so let’s start with the obvious. Dane Whitman is a hero known as the Black Knight. In the comics, he eventually becomes an Avengers, but he is much more complicated than your average hero. In fact, he even mentions in the film his complicated family history. His ancestor, Sir Percy, was a member of King Arthur’s court and the first Black Knight. That mantle has been passed down and eventually worked its way to Dane. 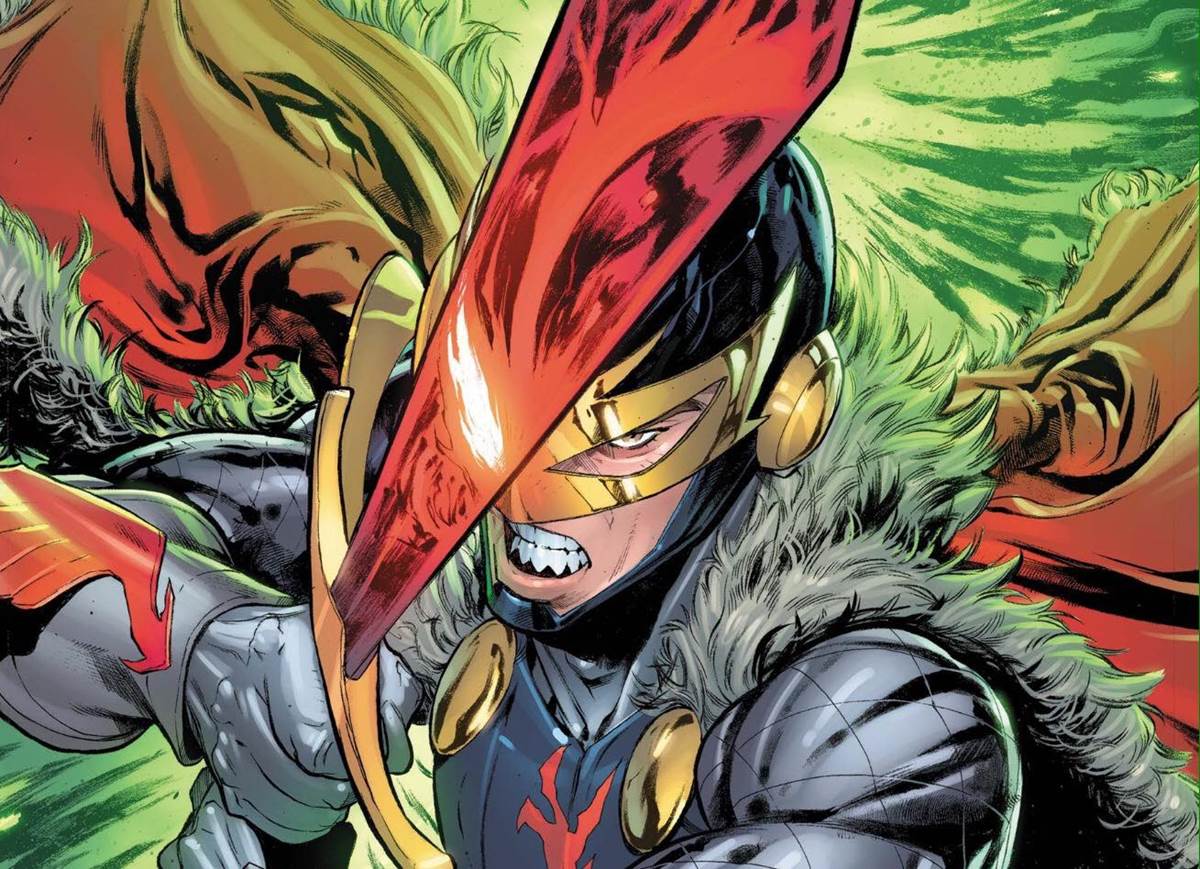 As for the sword, this is the weapon of the Black Knight known as the Ebony Blade. The blade is actually mentioned earlier in the film, when Thena wields a sword that she reveals to be Excalibur. The Ebony Blade, while an incredibly powerful weapon, also comes with a curse for whomever wields it.

The curse slowly corrupts the owner of the sword and forces them to give into their darkest urges. In the recent crossover event “King in Black,” the symbiote god Knull revealed that the Ebony Blade can “only be wielded to its mightiest potential by those impure of heart.” That news devastated Whitman as it means that all the terrible things the blade cause him to do were actually coming from within his own heart.

Now, onto the real mystery of this scene. Who is it that interrupts Dane and questions if he is ready. The first thought for comic fans was likely Merlin, the wizard and friend of many generations of Black Knights. However, the real answer is far more surprising and potentially more exciting… 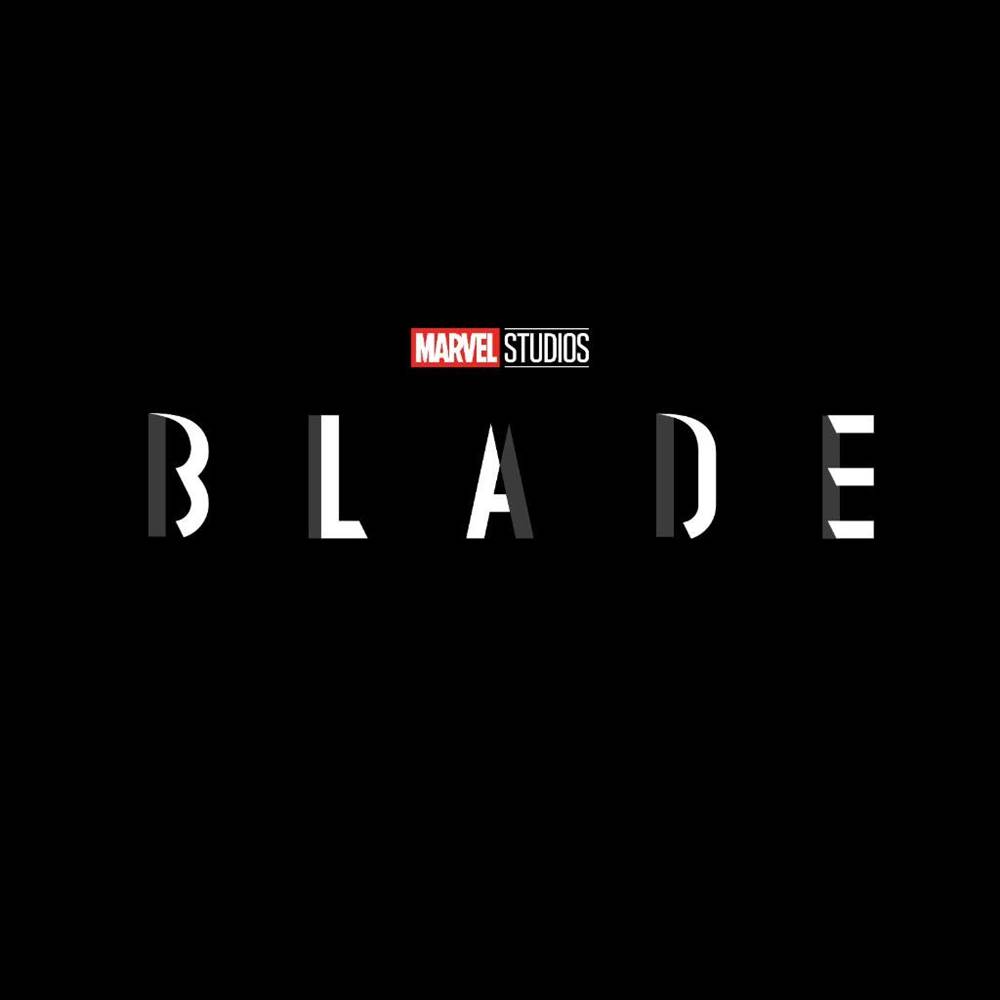 That’s right! It appears the the voice belongs to none other than the Daywalker himself, Blade. That news comes from an interview between Fandom and Eternals director Chloe Zhao.

The disembodied voice that stopped Dane Whitman from picking up the Ebony Blade came from actor Mahershala Ali, who was announced to be playing the titular vampire hunter during the Phase 4 presentation back at San Diego Comic-Con in 2019.

This move makes a lot of sense for the MCU because with so many new characters and films already on the slate, and other surprises like Eros already popping up, another new character like Merlin could have become too much too fast. As far as the comic history goes though, this is completely out of left field. There is very little history between Blade and the Black Knight, aside from the face that both have been members of the Avengers. So Blade’s arrival here is certainly a little strange. Still, it’s a very exciting first “appearance” for a character that fans are already very excited to see.

As for the next step, we’re just going to have to wait and see what happens because, as I said, there is very little source material to go off of for these two characters.

You can see Marvel’s Eternals in theaters now.