After defeating King Andrias’ robot last episode, a new chase is on in the human world in this week’s episode of Amphibia. Oh, and it’s Sprig’s birthday too, but that doesn’t seem to have an effect on the story as a whole…unless it does? 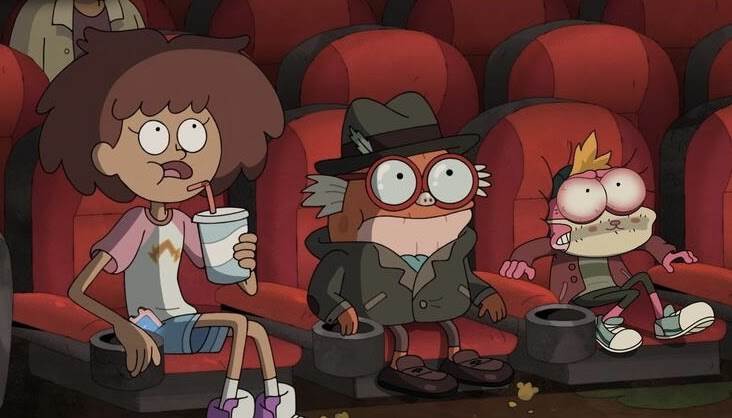 RuPaul guest stars as the federal government agent known as Mr. X in this episode. Last episode, security footage captured the Plantar family, and now Mr. X is on scene to discover what these creatures are.

.@RuPaul rolls into the newest episode of #Amphibia to guest star as Mr. X, a government agent after Anne, voiced by @brendasong, and the Plantars. The new episode premieres tomorrow on #DisneyChannel and #DisneyNOW. pic.twitter.com/ocOdflHHd6

Mr. X and his assistant, Jenny, are investigating the Plantar family and discover that they are definitely possibly aliens and someone is helping them.

Thinking that there is nobody after them now that they have destroyed Andrias’ robot, Anne decides to take the Plantars to see a movie. Anne’s parents are still euphoric after helping their daughter and her friends so they are eager and willing to help out again if anything comes up. Good thing too, since Mr. X is already hot on their trail and heading to the family’s restaurant.

Anne and the Plantars arrive at the theater, and its immediate sensory overload. But back at the restaurant, Mr. X is questioning Mrs. Boonchuy asking if she’s seen these creatures before showing her a surveillance picture of the Plantars.

Mrs. Boonchuy obviously recognizes them but plays dumb and asks whos looking for them anyway, before being told that the Federal Government is the one looking for them. Just then, Jenny comes in saying they’ve been spotted with the human string bean (Anne) and they immediately leave for the restaurant and head to the theater.

Anne’s parents try to call her, but due to the loud noises of over twenty minutes of movie trailers, they miss the call so her parents now have the chance they were looking for again, to jump into action and go save their daughter and her friends.

A chase ensues through the traffic of Los Angeles as both parties head to the movie theater, but Mr. X gets there in time to intercept the group as they come out of their film. They sneak into another screening, and Mr. X follows them in and sits down behind them, asking if they’re from the area or just visiting. Immediately giving themselves up, the group screams and runs through the theater in another chase sequence.

They try to leave the building, but Jenny is at the door scanning everyone who is leaving so the group is now cornered in the multiplex. The group makes their way into a storage closet where old movie posters and cardboard displays act as decoys and are able to get away from Mr. X before taking refuge in a nearby restroom stall.

The lights kick back on, and Mr. X is embarrassed to discover two pet store frogs and a tadpole sitting in the restroom stall. Turns out, Anne’s parents, using a particular set of skills (or lack thereof) were able to help out.

But after their explanation, they couldn’t figure out how her parents knew where they were before they admitted to putting a tracking device on Hop Pop.

Mr. X is embarrassed, but this isn’t the last we’ve seen of him. The real question is if he’s a villain or an ally. Perhaps in the upcoming episodes we’ll find out.

It’s Sprig’s birthday today, but Anne didn’t know. So she is on her way to make this the greatest birthday he’s ever had. However, in Amphibia, birthdays are more for reflecting on their life while wearing a mud crown.

But the Plantars are no longer in Amphibia, are they? So Anne is set to make her best friend’s Earthbound birthday fun and memorable. So the two set out to the mall, the Santa Monica pier, and a Mexican restaurant before hitting a park’s carousel and the Griffith Observatory. After everything, Sprig thanks Anne for the fun of the day, but says the birthday was so fun, it was definitely in his Top 3 birthday celebrations.

Anne sets out to make sure that the birthday was number one, and her dad takes them to an open area in the hills where Hot Air balloons are ready to take off, even though their balloon is made from an old horror movie promotional piece, and they’re in the basket beneath a giant, terrifying clown.

However, high wind alerts keep them grounded, and their guide tells them they can’t take off until the winds die down, BUT they can go sit in the basket anyway and pretend they’re flying. Which they opt to do, and give the fire a little blast so they’ll lift off. Hey, they’re still tethered to the ground right? They can’t go far. Until a gust of all that wind is so strong it pulls the tether out of the ground and they take off towards Downtown Los Angeles.

Anne attempts to control the balloon while Sprig uses his frog tongue to try and steer the balloon, which makes me laugh because now the whole city can see what’s going on, yet in other episodes, including the first half of this episode, is all about keeping the Plantars secret, but hey, they’re in danger.

After bailing out the balloon and landing (mostly) safely, Anne gives Sprig his gift, a telescope that is engraved with his name on it, and apologizes for not being able to give him the best birthday ever.

Sprig explains why its top 3, because he got to spend time with his best friend, Anne, and the other top two consist of the birthday when he was actually born, and the #2 spot is when his mom and dad give him his hat that we see him wearing all the time.

This episode of Amphibia is now available on Disney Channel and the DisneyNOW app. Previous episodes and seasons of the show can be seen streaming on Disney+.