Scratch’s fate may be sealed thanks to Brighton’s turnip festival, and yet another curse backfires against Molly and Scratch in this week’s The Ghost and Molly McGee. 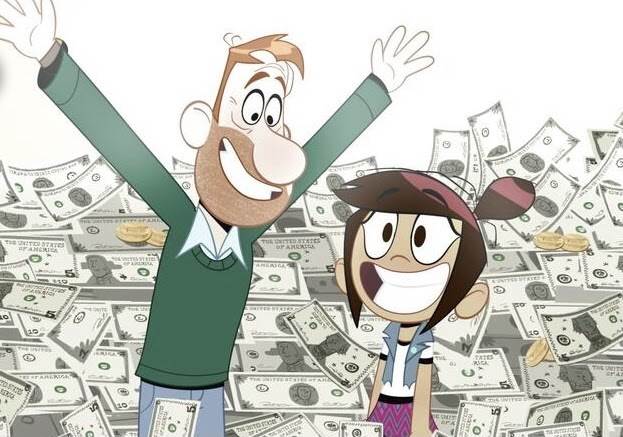 Also, I don’t know if the magazine meant to have an Oliver & Company reference, but I’m taking it as such, where the town says “Turns out: Perfekt IS Easy.”

Despite the lackluster thrill of turnips, Molly and her dad set out to throw the best turnip festival the town has seen and is ready to get the tourists into town so they can be number 1.

While Scratch isn’t on board, saying that turnips are made from earwax, he gets pulled back to his world for a meeting with the ghost council. Brighton’s misery numbers aren’t that great, as joy seems to be rising. So he takes the opportunity to turn the turnip festival into an event that spreads misery, or else he’ll get sent into the flow of failed phantoms, where the ghost responsible for Perfektborg ended up.

The festival is here, a reporter for Midwest Monthly is on scene and the whole town has turned up for turnips. Scratch however, is having second thoughts about destroying the festival since it means so much to Molly and her dad, but it's a good thing his faithful friend Geoff is around. He can turn anything into a disaster and it wouldn’t be Scratch’s fault.

Not wanting to lose his best friend to the flow of failed phantoms, Geoff sets off and destroys a giant turnip pinata (that was filled with turnips) that sets off and rolls through the festival, destroying tents, booths, audience members, and taking the Midwest Monthly reporter along for the ride.

Just when Scratch thinks the misery numbers are higher than ever, we see the owner of the Brighton Motor Lodge packing up everything ready to shut the business down, when people who clearly saw the turnip festival on the Midwest Monthly website start calling up to book rooms, saving the business and bringing joy to the owner. At the ghost council, Brighton’s happiness meter shook and increased just a little bit, possibly securing Scratch’s fate.

It’s a Saturday and Molly has no homework, no chores, and otherwise no responsibilities so she wakes up Scratch, her BFF, and set out on the town for an adventure. But what kind of an adventure? The possibilities are endless…so cue the musical number!

Molly wants to say yes to all the possibilities, but Scratch has a tendency to enjoy saying no to everything. Making it a challenge, Scratch makes it official with a curse, that until midnight, Molly has to say yes to everything and Scratch has to say No to everything. While all sounds good on paper, things take a turn when en route to the library, Molly encounters a close-up magician, who she is clearly uncomfortable with. Scratch seizes the opportunity to ask her to watch some street magic knowing she can’t say no, so she has to enjoy the show. However, she ends up with Patty, a local resident of Brighton who has been cooking up some gumbo but has no taste buds so she needs a taste tester. Molly enjoys helping her friend, but when she sees the gumbo, immediately regrets her inability to say no… again. The curse also finds her helping out another local who has lost his beloved pet, a skunk. As Molly is chasing the animal down and gets sprayed in the face, much to Scratch’s delight, he gets summoned back to the Ghost Council.

For once, the council is pleased with Scratch. Because of today’s events, the misery numbers in Brighton are better and Scratch is being invited to join the Elite Ghosts Society, something he has been waiting for his entire afterlife. But TWIST! The curse! He cannot say yes to accept, he has to say no. The council states that they will never ask this question or invite him again. In tears, Scratch again says no, and returns to Molly disappointed. They then realize, they can reverse the curse, and do the inverse, and head back home so they don’t find themselves in any trouble they don’t want to be in.

All episode the rest of the McGee’s have been dealing with a swarm of bees that have taken over the kitchen, and team up to help the family. Turns out, this is really the only good use of this curse that they have placed upon themselves as they ask each other yes or no questions while saving everyone.

As they countdown the seconds until midnight, Molly gets one last trick in, getting Scratch to french braid her hair despite the amount of bee wings in there, and the iridescent quality that they give.

This episode of The Ghost and Molly McGee is now available on the Disney Channel and the DisneyNOW App. You can also catch up with some earlier episodes now streaming on Disney+.