Hello and welcome to Laughing Place’s regular recap of new episodes of The Simpsons on the FOX network. This week’s installment, entitled “A Serious Flanders” (a reference to the 2009 Coen Brothers film A Serious Man), is the sixth episode of the long-running animated sitcom’s 33rd season. It’s also the first part of a two-part episode. “A Serious Flanders” (Part 1) begins with “Simpflix” (a parody of Netflix, in which the viewers chooses “A Serious Flanders”, which is immediately clearly a parody of the FX drama series Fargo, based on the Coen Brothers crime drama of the same name. The opening story tells the story of the Rich Texan and a frightening-looking man named Kostas Becker (voiced by guest star Brian Cox) who comes to collect a debt from him… in blood. We then see Ned Flanders walking through the woods picking up garbage as captions similar to those you’d see on Fargo play over the images. Flanders finds Homer sleeping among the trees and the two have a hesitant moment of bonding before Ned tumbles down a hill and finds a bag full of money in a hollow log. Homer falls down behind him… “It’s always been my dream to find a bag of money! You stole my dream!”

At home, Ned counts the money as Rodd and Todd watch. They argue about what they should do with the money, and Flanders flashes back to his sheriff grandfather (Timothy Olyphant) stopping a convenience store robbery some decades earlier. In the present, Ned donates the bag of money to a local orphanage, and the proprietor Barb (Cristin Milioti) wants to reward him, but Flanders refuses. “What if you donated that money in the name of someone special?” Ned decides to donate the money in the name of his grandfather, who happens to have the same name, so Flanders still gets all the recognition for the gesture of charity. Next we get a montage of Kostas Becker’s minions disposing of the Rich Texan’s corpse, followed by Becker on the phone with contact, promising proof of the assassination: the Texan’s face in a breifcase. Becker then sees a news report about Flanders’s donation and vows to collect another debt. 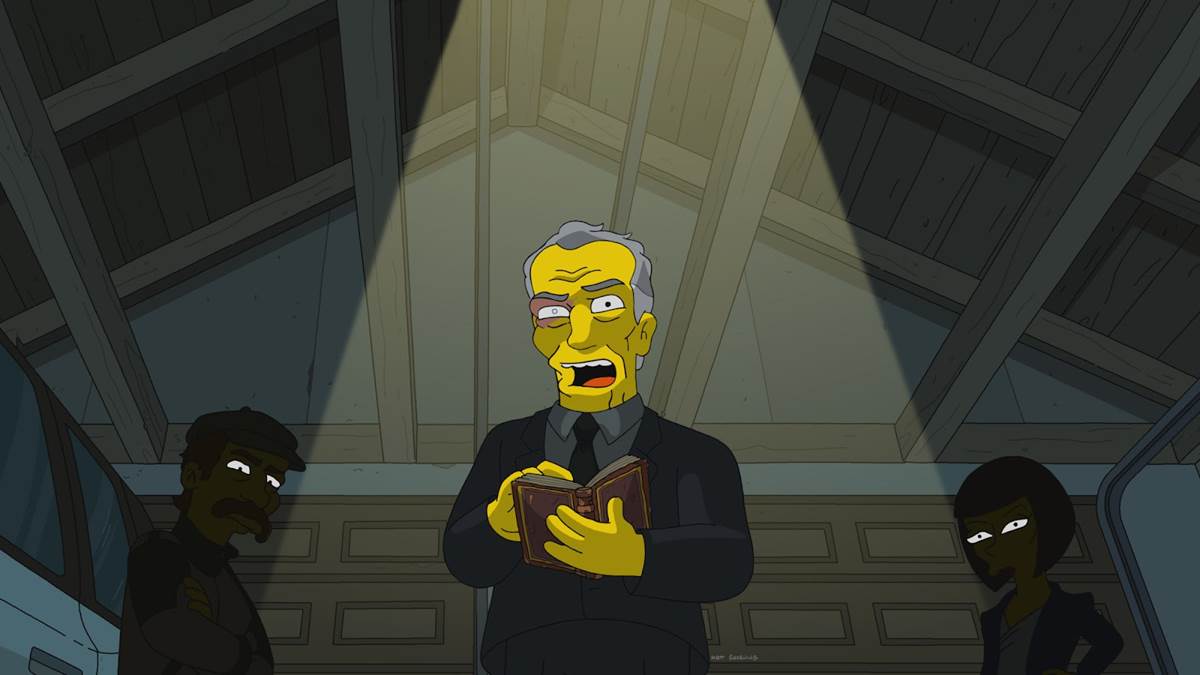 At the Android’s Dungeon, two of Becker’s underlings (Chris O’Dowd and Jessica Paré) confront Comic Book Guy about Flanders’s whereabouts. “Oh, locking the door as a means of intimidation… how original,” CBG says sarcastically, though he eventually gives in to their demands when the henchpeople start destroying his comic books and collectibles. CBG calls Fat Tony (semi-regular guest star Joe Mantegna) on the phone and asks why he’s paying protection if he’s going to get roughed up by a rival gang. At Springfield’s church after Sunday services, Ned is ambushed by Becker, who says he only has one unbalanced debt– the same amount Flanders found in that hollow log. Suddenly Ned is rescued by children, Raiders of the Lost Ark-style, and Barb accompanies them into the church to ask Flanders out on a date, but Becker still finds Ned’s address on the front page of a bible.

At a Christmas festival, Ned and Barb begin to fall in love while Homer mocks them from a distance. “Now I see what you really did with that money… buy the love and admiration of all these suckers!” The crowd boos Homer and Groundskeeper Willie throws him into the “Drunk Rink,” where all the local alcoholics find themselves slipping on a frozen pond of ice. Back at the Simpson house, Marge berates Homer for his arrogance and kicks him out of the bedroom, while Becker’s minions drive toward Flanders’s house, but the bible page blows out the window and they get confused by all the lawncare equipment Homer has borrowed from Ned over the years. Homer sleeps on the living-room couch under a “Flanders Family Quilt” blanket, and Santa’s Little Helper begins growling when he hears a noise outside. Homer follows him out to find that SLH has found the Rich Texan’s face. Then he’s immediately tased to unconsciousness by the henchpeople. Flanders drops Barb off back at her home, and she invites him in where they start to make out. Inside the house, Ned spots a series of photos of Barb with Sideshow Mel. She reveals that the two of them are married, but they “have an arrangement.” “Don’t worry about him– he can turn his video game up real loud,” Barb says, but Ned runs out in a huff. At the Rich Texan’s home, Becker is furious that his minions have brought him the wrong man, but he won’t let them kill Homer either. Instead, he is forced to watch the Property Brothers on HGTV. At the Flanders house, Ned prays to God and asks if he’s being punished for his “prideful” moment of donating the money to the orphanage. Beckers calls on the phone and threatens to torture Homer if Ned doesn’t turn himself in. Marge shows up and Flanders’s front door and asks him if he knows where Homer is, forcing him to lie or cause Becker to kill his friend.

Marge goes around town asking if anyone knows where Homer might be. She visit’s Moe’s Tavern, the Krusty Burger, and even the Kwik-E-Mart, but nobody seems to know where he is. Meanwhile at a doughnut shop, Fat Tony confronts Becker about his mistreatment of Comic Book Guy. “Did you ever hear the parable of Lucifer and the millipede?” Becker asks, but Fat Tony interrupts to tell him to get out of town, putting his cigar out on his doughnut, but Becker just eats it. “You just ate your last cigar, old man,” Fat Tony says. Becker uses his coffee, fork, and plate to assault Fat Tony and his goons, and both Marge and Disco Stu get caught in the crossfire when a gunfight breaks out between the two gangs. Stu takes a bullet and apparently dies, but Marge ducks behind the doughtnut shop counter to watch the rest of the battle play out. Suddenly Mr. Burns enters, saying “Ahoy-hoy!” but he too gets shot in the head, causing it to pop like a balloon.

Having eliminated his men, Becker drags Fat Tony into the doughnut shop’s kitchen, where he uses the equipment to deep-fry his face. Fat Tony screams and Marge gasps, then Becker exits and drops Homer’s work ID card, which causes Marge to worry even further. Then Snake enters intending to hold up the doughnut shop and is shocked to find the grisly scene of violence that has unfolded there. He runs into the kitchen to get some water, but is further unsettled to find that Fat Tony’s face has been turned into a doughnut. We then see a split-screen of Flanders praying in church, Marge staring at Homer’s ID outside the doughnut shop, and Homer watching the Property Brothers. Becker laughs maniacally and the episode cuts to credits. 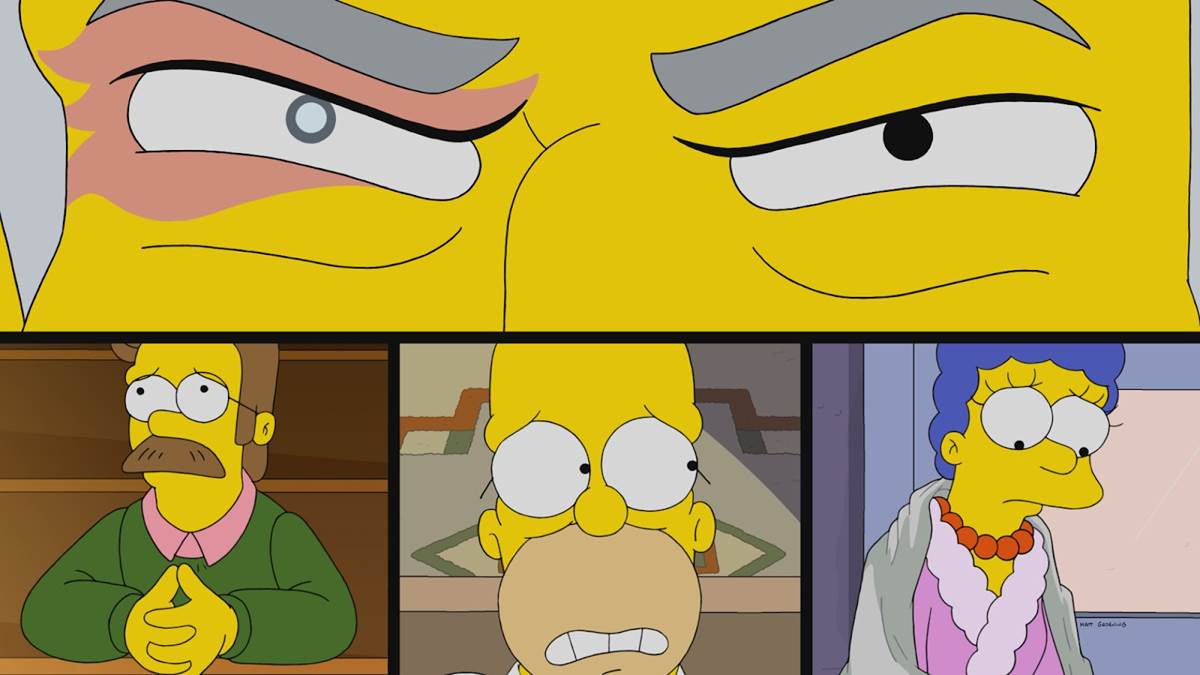 Next week: “A Serious Flanders” (Part 2)