Hello and welcome to Laughing Place’s regular recap of new episodes of The Simpsons on the FOX Network. This week’s installment, entitled “Lisa’s Belly,” is the fifth episode of the long-running sitcom’s 33rd season. “Lisa’s Belly” begins with Homer waking Bart and Lisa up by screaming “Riot Rivers!” over and over again. We cut to Our Favorite Family arriving at the water park, which Homer says was “the greatest summer job I ever had.” We see a montage of accidents from Riot Rivers, which resembles New Jersey’s Action Park, and Lisa even mentions that a documentary had been made about the place. “It didn’t happen that way. There was different music,” says Homer. They arrive at the water park, now renamed Quiet Rivers, much to Homer’s disappointment. “They turned all the super cool rides into baby rides.” Bart and Lisa ride toads around in a circle, while Marge and Maggie visit the wading pool and Milhouse steals one of Maggie’s diapers. Homer leads Bart and Lisa to “the best ride of them all,” which is still there but completely grown over: the Devil’s Deluge.

They climb to the top of the tower and Homer turns on the water. “Today we punch fear in the face and steal death’s girlfriend,” Homer says as the stairway collapses behind them. “Also this is now the only way down.” They go through the water slide’s loop-de-loop and wind up in a gross pool at the end, high-fiving their achievement. Later Bart and Lisa start to get sick. “Upstairs or downstairs?” asks Marge. “Both!” reply the kids. At the hospital, Dr. Hibbert says Bart and Lisa have been exposed to a 30-year-old mix of bacteria and hair product. He prescribes them steroids and says one of the side effects may be temporary weight gain. We cut to Bart and Lisa leaving for their first day of school after summer vacation, having put on a few pounds. “Look at that belly,” says Marge playfully to Lisa, “Someone’s getting chunky.” Lisa does not take this affectionate name-calling very well, and sulks out the front door of the Simpson home. 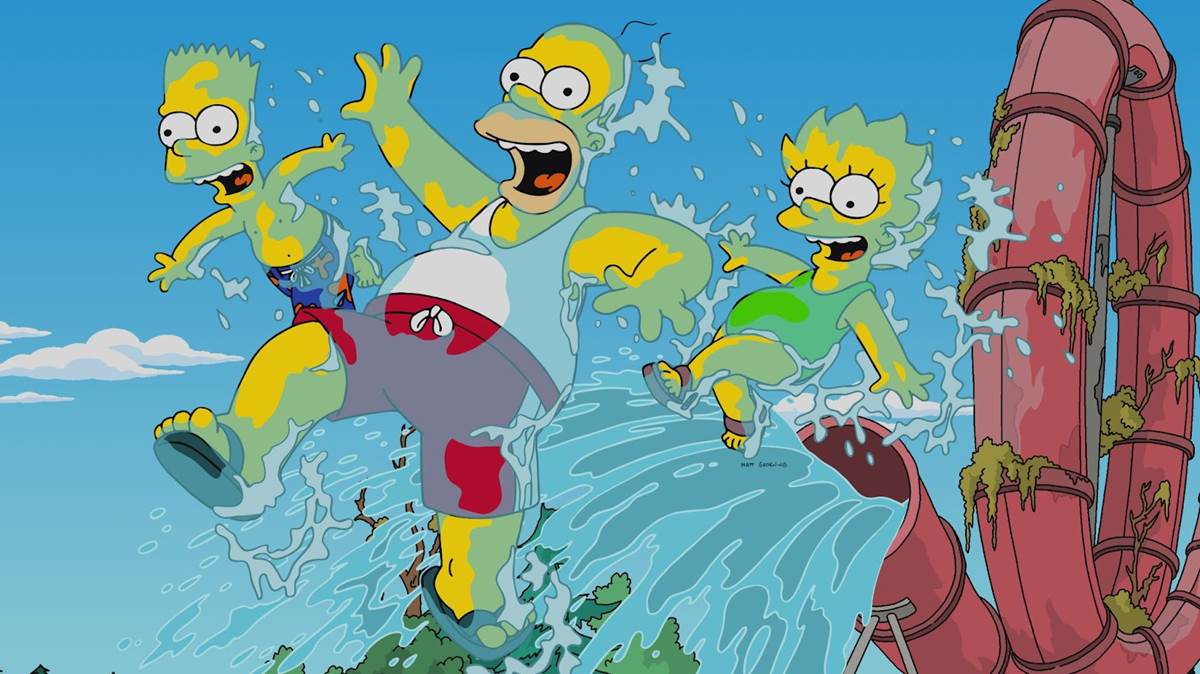 In the classroom, Lisa gives herself a pep talk to not ruin the first day of school, which she calls “the best day of the year.” When Miss Hoover starts writing on the chalkboard and Principal Skinner starts his morning announcements, all Lisa can see and hear is the word “chunky.” On the playground, the bullies start making fun of Bart for his weight gain until he reveals it was the result of steroid usage. “Today you become a man,” says Jimbo as the bullies take Bart to a makeshift gym in the basement of Springfield Elementary School. “I’m living every kid’s dream– to be accepted by his tormentors,” says Bart happily. At home, Marge comforts Lisa for being down in the dumps. “I don’t know what I was thinking… for not taking you shopping for back-to-school clothes.” They go to the mall and Lisa wants to buy a hip new top, but it doesn’t fit. “Are you positive that’s the eight-year-old size?” Marge asks the saleswoman.

They end up finding a “very flattering” muumuu for Lisa, who gets upset because she doesn’t want to call attention to herself. Lisa has a public freakout when the clerks bring even larger sizes of clothes for her to try on and Marge drags her screaming from the store. In the gym, Bart talks with the bullies about ladies, they eat pizza rolls together, and have a “weight fight,” throwing the barbells at each other. “Working out is awesome,” says Bart. Marge arrives home and tells Homer about Lisa’s freakout. “Time for me to earn my World’s Greatest Dad mug.” Marge says Homer bought the mug for himself, but Homer still goes upstairs to comfort Lisa. When he hears that Marge called her “chunky,” his first instinct is to leave forever, but instead he decides to use his fatherly knowledge to help his daughter. “I can’t expect you to understand my problem,” says Lisa. “I just wish I didn’t care what people think.” 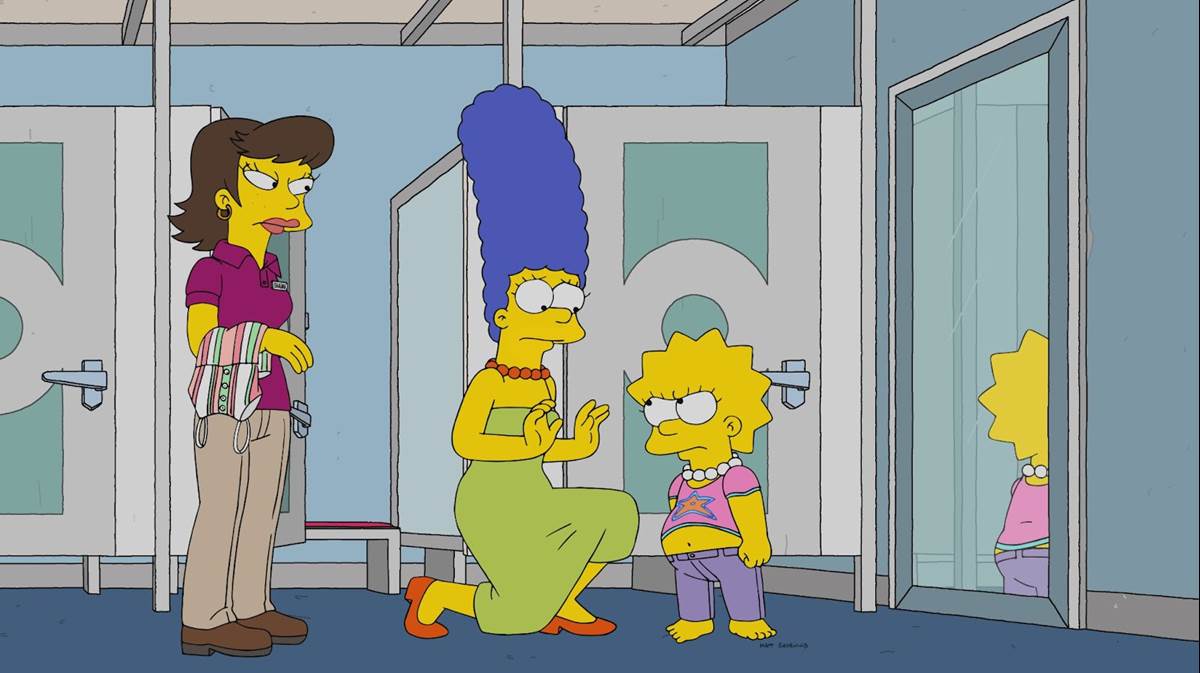 Homer invites Patty and Selma over to make Lisa feel better, though Lisa is hesitant about the proposition. Her aunts take Lisa to the park and sing her a song parody of “The Age of Aquarius” about letting insults roll off her back like they do: “This is the dawning of the Age of Who-Gives-a-Crap?” Lisa gets into the swing of things and by the end of the song has learned to embrace her chunkiness. She returns home and tells her mother that she’s now feeling better about herself. But when Marge says that soon Lisa will be back to normal now that she’s off the steroids, Lisa starts to feel inadequate again. Marge takes Lisa to King Toot’s music store and tries to buy off her happiness, and Luanne Van Houten tries to relate by saying she went through the same thing with Milhouse. Luanne recommends hypnotherapy for Lisa, and Milhouse says after one session, he and his mom were “back in the tub together.”

At the gym, Bart is surprised that the bullies have brought their girlfriends. “I thought we were going to talk about girls… but not real ones,” Bart cries as he crawls out the window. He finds himself lonely on the playground again, playing four-square with the younger kids. At hypnotherapy, Lisa is skeptical about the practice, but when she looks into the doctor’s “hypno-wheel,” she finds herself with Marge inside her own mind. Marge is shocked to find how much space the word “chunky” is taking up in Lisa’s mind, to the point where it’s crushing the Powerpuff Girls. “I never realized how much power my words have.” Next they travel into Marge’s subconscious memory of when her mother called her “plain.” Lisa and Marge comfort each other as the words “chunky” and “plain” shrink down to a more manageable size. At home, Homer holds two jars of peanut butter: chunky and plain, and says “I love both of you.” In the coda, Marge and Lisa pass Comic Book Guy in the lobby of the hypnotherapist, and wonder if everyone has words stuck inside their heads. CBG’s is “annoying” and the hypnotherapists’s is “quack” but then we get a quick montage of other characters around Springfield and the words inside their heads, ending on Homer, who is comforted by his word, “lazy,” while he rests on a hammock with his two jars of peanut butter.