TV Recap: “The Simpsons” Season 33 Episode 4: Moe’s True Love Returns in “The Wayz We Were”

Longtime fans of The Simpsons were in for a treat with “The Wayz We Were,” the 4th episode of season 33. It brings back a character from one of the most charming Moe-centric episodes, “Eeny Teeny Maya, Moe.” In “The Wayz We Were,” Maya returns. Does Moe finally get his happy ending? Find out in our recap. 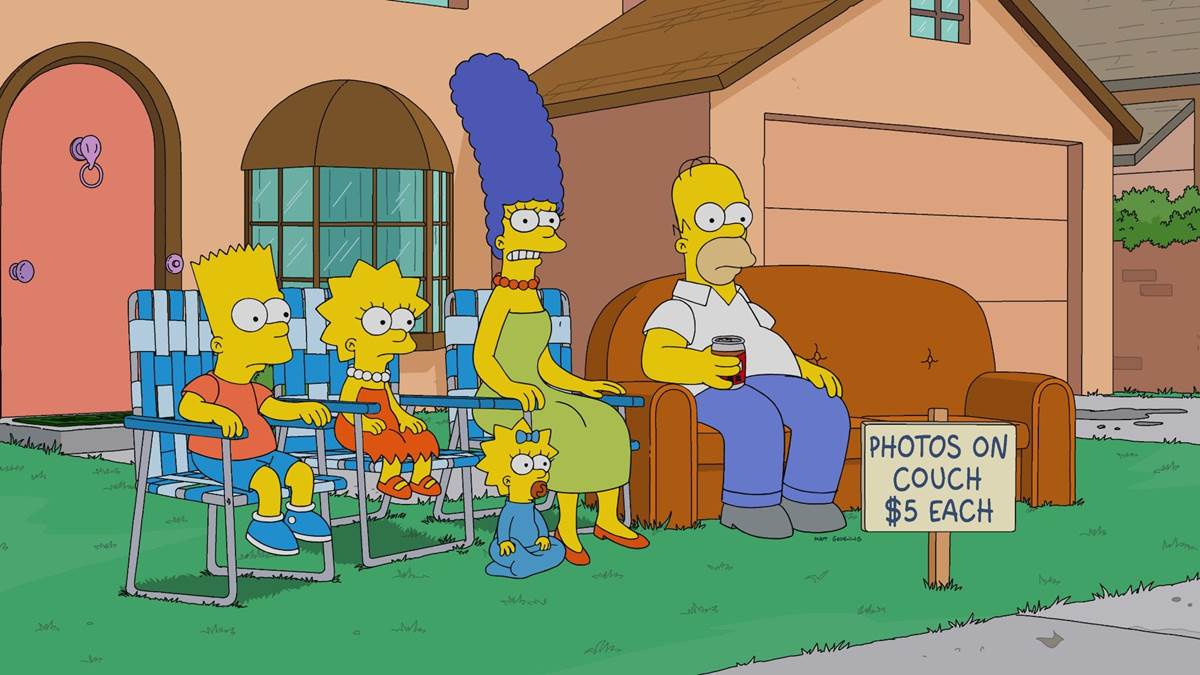 Couch gag: Stopmotion studio Stoopid Buddy (Crossing Swords, Marvel’s M.O.D.O.K.) created this intro where Grandpa takes the cellphone Maggie is playing with and gives her a wooden toy castle and figures. She projects herself into the world as a princess who is given a dragon, who she then uses to set the kingdom ablaze. The royal Simpsons family sits on their charred couch to watch TV at the end.

In Prehistoric Springfield, a couple that looks a lot like Homer (Dan Castellaneta) and Marge (Julie Kavner) argue over his lack of talent for hunting and gathering. When a predecessor of Professor Frink (Hank Azaria) happens upon a cylindrical rock, he invents the wheel and the chariot and modernizes transportation using creatures from the ice age. But when the Homer-esque man’s polar bear collapses in the street, he creates the world’s first traffic jam. Frink’s predecessor views to solve the problem and declares that this is the last traffic jam ever.

In the present, Bart (Nancy Cartwright) and Milhouse (Pamela Hayden) play soccer in the front yard when they realize that Evergreen Terrace is suddenly a parking lot of traffic. Milhouse observes “This is like my favorite movie ever, Cars 3. I hated Cars 1 and 2.” They watch as a gas truck refuels itself. Among the many stuck cars is Moe (Hank Azaria), who laments that he has nothing to be late for and nobody to care about him. He looks at his reflection in his side mirror and it reads “Objects in mirror may be more depressed than they appear.”

Inside the Simpson’s house, Homer and Marge are in their bed making love when Homer kicks it up a notch by saying “Let’s take this from Disney+ to HBO Max.” Under the covers, Homer comments that Marge hasn’t honked like that in a while but she says it’s the traffic outside. Homer and Marge go to the front porch to take a peek. Moe sees a purple car in his rearview mirror. “That car looks familiar,” he exclaims as he races onto the sidewalk to get out of there. From his perspective, we see him drive through multiple crossing signs, hitting a variety of objects including a flopping fish at a fish crossing and Trey Anastasio at a Phish crossing. “Oh, come on,” Trey complains as Moe hits him with his car. “We put up a sign and everything.” The Simpsons sit in their front yard on folding chairs watching the traffic. Lisa (Yeardley Smith) asks why there’s so much traffic on the street anyway and Gil Gunderson (Dan Castellaneta) hears her through his window. “Wayz told me this was the fastest route. That’s important when you’re selling your organs.” He lifts up his shirt to show them a map of where they all are inside him. Lisa says she read about how these new navigation apps are destroying quiet neighborhoods. As they look out, a truck full of “Fresh Vegetables” updates the sign to say “Fresh Garbage.” A car puts out a mailbox and gets a delivery. Marge uses an app to call a neighborhood meeting.

“It’s time to talk about the terrible problem on our street,” Marge says. Sideshow Mel (Dan Castellaneta) is the first to speak, saying “I assume you’re talking about you, The Simpsons.” The neighbors list a bunch of complaints, one of which being that Maggie is the only nice one and she once shot a guy (a callback to “Who Shot Mr. Burns?” part 1 and part 2). Homer vows to fix the traffic problem and thereby fix his reputation. “Just say to me what I say to Tinker Bell: I Believe,” he asks his neighbors. They remain silent.

Homer logs onto the Wayz website to leave feedback, but in order to submit, he has to pass a robot check. He passes by selecting all the images with traffic lights and yield signs but calls Lisa to help him with the crosswalks. Lisa takes the lead and progresses through to more challenging checks including selecting the Jesuits, foreign dictators, overrated fiction, hyper-intelligent cartoon characters (of which Lisa is one of the options), vegan nut milks, future criminals, and New England doorways. Homer gives up and tries to call, but he is informed by a machine that there are over 5,000 callers ahead of him. The Wayz hold music is the noise of other frustrated callers impatiently waiting for their turn. 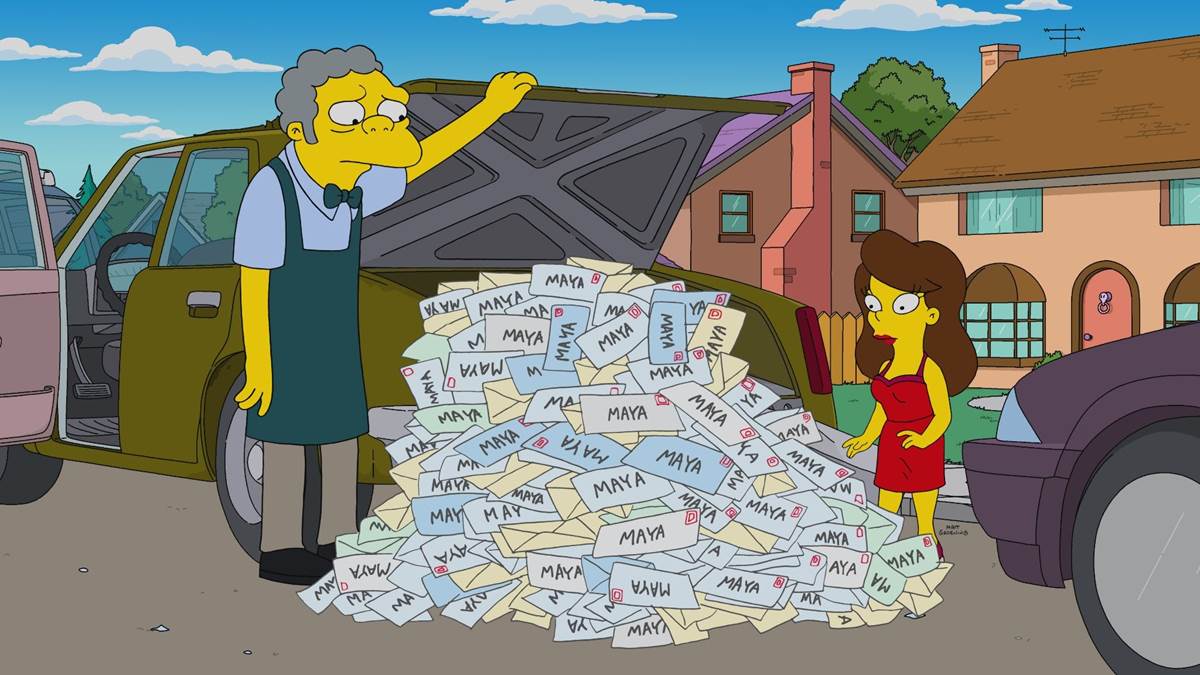 Even though Moe tried to evade the purple car, it ends up behind him again and he wonders if it could really be who he thinks it is. He gets out of the car to find Maya (Tress MacNeille) staring back at him. “Hi Moe, I missed you. I never should have left.” Moe refers to his 6 days with Maya as the “Longest best relationship” of his life. He reminisces through flashback scenes from “Eeny Teeny Maya, Moe,” after which he confesses to having written her a letter every day since he last saw her. He opens his trunk and they all spill out into the street. “Really wish I had gotten your address.”

Moe and Maya sit outside a house drinking coffee and catching up. Maya got her Ph.D., to which Moe says “Oh, I’m sorry, you taking medicine for that?” Moe says his life is bad and lonely and when Maya says she missed him, he says he can’t go through being broken up with again. Maya hugs Moe and they kiss.

Barney (Dan Castellaneta) waits outside of Moe’s Tavern, which has a sign announcing that he will be back in 5-minutes. “But I want a drink now,” Barney grumbles. Upstairs, Moe and Maya cuddle in their pajamas in his sofa sleeper. Moe has a moment of panic about telling Maya he loves her, recalling that it always ends badly. In his montage of negative associations with the phrase is Moe exclaiming “I love New York” in Time’s Square, promptly being grifted by people dressed as Elmo and Spider-Man.

Homer has recruited Professor Frink to help with the Wayz issue and the eccentric genius suggests that he can rewrite the code to make Evergreen Terrace no longer exist in Wayz. He enters his information and suddenly Evergreen Terrace is empty. Homer announces that it’s okay to play in the streets again and as kids resume playing, Ralph Wiggum is surrounded by moths, who eat away his clothes. “Climate change is real,” he exclaims. Homer realizes that his neighbors are now making eye contact with him. “I will never get tired of this,” Homer brags. 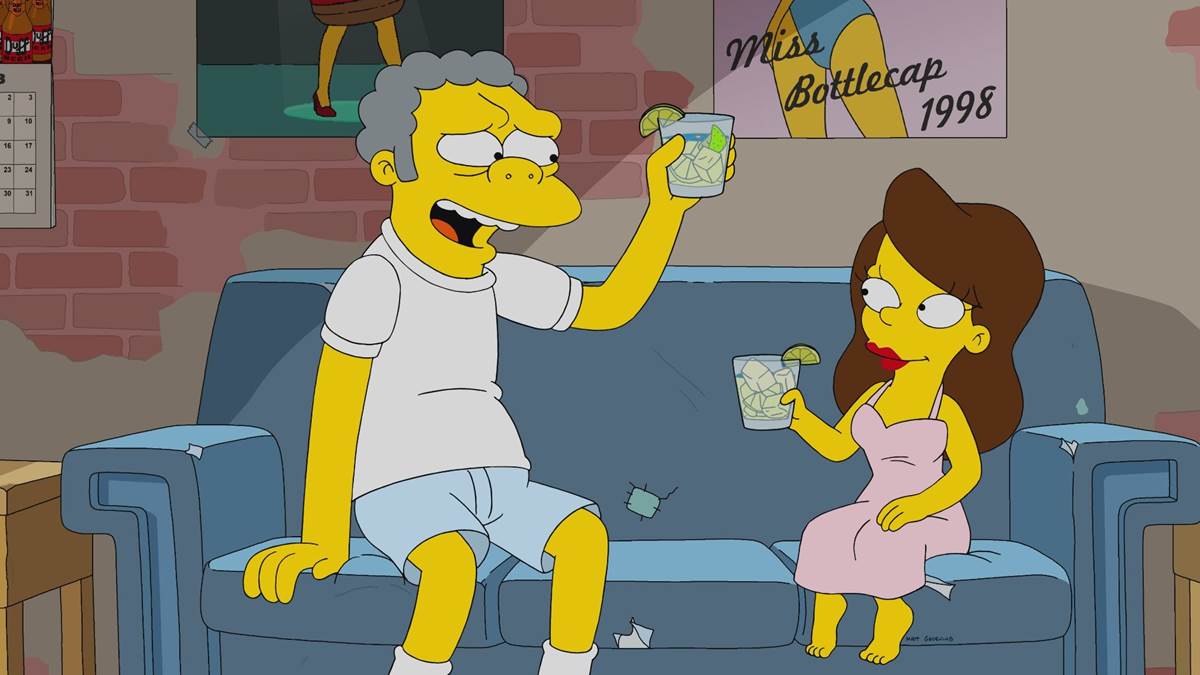 Moe and Maya clean up his apartment while singing a parody of “I’m Walking on Sunshine” called “You’re Bringing in Sunshine.” Barney even joins in for the finale. When Homer and Lenny (Harry Shearer) come in to ask if he and Maya are an item again, Moe asks Homer to talk privately in the alley. Moe worries that Maya will leave him again. “You’re the only guy here who knows how to hold onto a woman. How did you keep Midge?” Homer says he got her pregnant but pulls out his phone to call “Midge” and Marge asks to speak to Moe. “Trust love,” she tells him, but Moe thinks that’s stupid.

The Simpsons are having lunch at a diner and the neighbors of Evergreen Terrace stand outside watching them with signs praising their name. They also keep having donuts delivered to the family. Homer is frustrated with his newfound celebrity and just wants to be left alone. A woman asks him to be the godfather of her baby and he asks to see it first, saying “Ugh, pass.”

Maya tells Moe she needs to go out to get stuff for dinner and will be back in 20 minutes. In the mirror, Moe sees his own reflection expressing his self-doubt, saying “No one could love you.” Moe tries to stand up to his negative thoughts by taking a baseball bat to the mirror, which cracks into 7 pieces and each of the Moe’s inside look different (a devil, Hellraiser, the Joker, and The Phantom of the Opera are among them). They sing a song about how Moe is going to die alone, causing Moe to run out of the room. Even though Moe left, his reflections remain and whistle at Maya when she walks in. Homer finds Moe hiding in Bart’s treehouse, with Bart and Millhouse playing around him. The next morning, Marge withholds Homer’s breakfast until he gets Moe out of the treehouse. Homer goes up to tell Moe he has to go. “If Kevin James can find happiness, why can’t you?” Homer suggests that Moe propose to Maya. “What are you proposing I propose?”, Moe asks. “I mean the big M,” Homer says. “Murder-suicide?”

Marge and Homer bring a freshened-up Moe back to his bar. He goes inside, pulls out his gun and a machete and uses it to chop off a ring from the tip of it. He finds Maya packing her bags upstairs and gets down on one knee. He sees his reflection in her eyes and misses that she accepts his proposal. As Moe and Maya dance, the silhouette of Homer and Marge in the stained glass window sing “The Way We Were” (which inspired the title of the episode). Silhouettes of Barney, Lenny and Carl (Alex Désert) in the other stained glass window complete the phase. Moe interrupts the romantic moment to tell Maya “Good song but the movie is crap.” Moe tears up as he pulls out a coupon he can finally use, good only for two people at Luigi’s. Cut to them on a date and Moe being upset because it expired ten years ago.

During the credits, Lisa is doing more security check quizzes for existentialists, celebrity chefs, very soft minerals, bebop jazz musicians (Bleeding Gums Murphy is one of them), tropical birds, chess grandmasters, stone fruits, American revolutionary battles, and nail shank diameters. When she finally gets through the last one, Marge calls that it’s time for bed.

Next week’s episode is called “Lisa’s Belly,” in which “Marge puts a hurtful word in Lisa's brain and Bart gets swole.” You can catch it on Sunday, October 24th at 8/7c on FOX.