“I didn't want to do a documentary that was just talking heads,” Director John Gleim explained at a recent press junket to promote the film’s wide release. He’s no stranger to the Walt Disney Archives, having worked closely with the team on multiple projects in the past and being a self-proclaimed Disney nerd. Audiences get to meet many members of the Walt Disney Archives team and see some really cool objects along the way, some of which John asked for, others he accepted suggestions from the archivists themselves. “With each archivist, we probably shot five or six different artifacts, and then just through the editing process, figured out which ones were the most interesting or which ones were the story was told best or which showed best on camera, things like that. It was very, very difficult to pick things because part of you wants to just show all the cool, iconic stuff like the storybook from Sleeping Beauty.”

Playing host in the film is producer Don Hahn, whose credits include Who Framed Roger Rabbit, Beauty and the Beast, and The Lion King, just to name a few. His presence is a callback to a 1941 film called The Reluctant Dragon, produced to satisfy growing requests for tours of Walt Disney’s animation studio through the eyes of comedic actor Robert Benchley. “John put me in the exact same place that Robert Benchley started back in the '40s and we spend our whole tour looking for Walt Disney's office, which is a little bit what the plot of that movie was,” Don Hahn shared. “I was fun going around talking to all the archivists and hearing what they do. Because when Becky [Cline] asked me if I would do this, I was totally flattered by it. I thought the fun part of it would be really talking to the archivists and finding out the stuff that none of us know that they see every day. So to be Robert Benchley for a day was obscure, but fantastic.”

“One of the reasons that I was so thrilled to see this come on Disney+ is for the casual fan,” Walt Disney Archives Director Becky Cline said about the wider audience the film is about to reach. “It's for people who know a little bit about Disney but are interested or just happened to run across it because their kids are watching something on Disney+. I love the idea that so many of the pieces that we share in this are related to entertainment programming to other films, to animation, to park attractions and things like that. I just think it's a great primer for anybody that's interested in Disney history. They can watch this and see all these great things and then go watch the movies right there on the same programming stream. Being able to have this kind of deep dive into Disney's history and then have it at your fingertips… I think that, to me, is one of the most interesting things about this kind of synergy opportunity between the Walt Disney Archives and everything that's already on Disney+ and things that are coming up.” 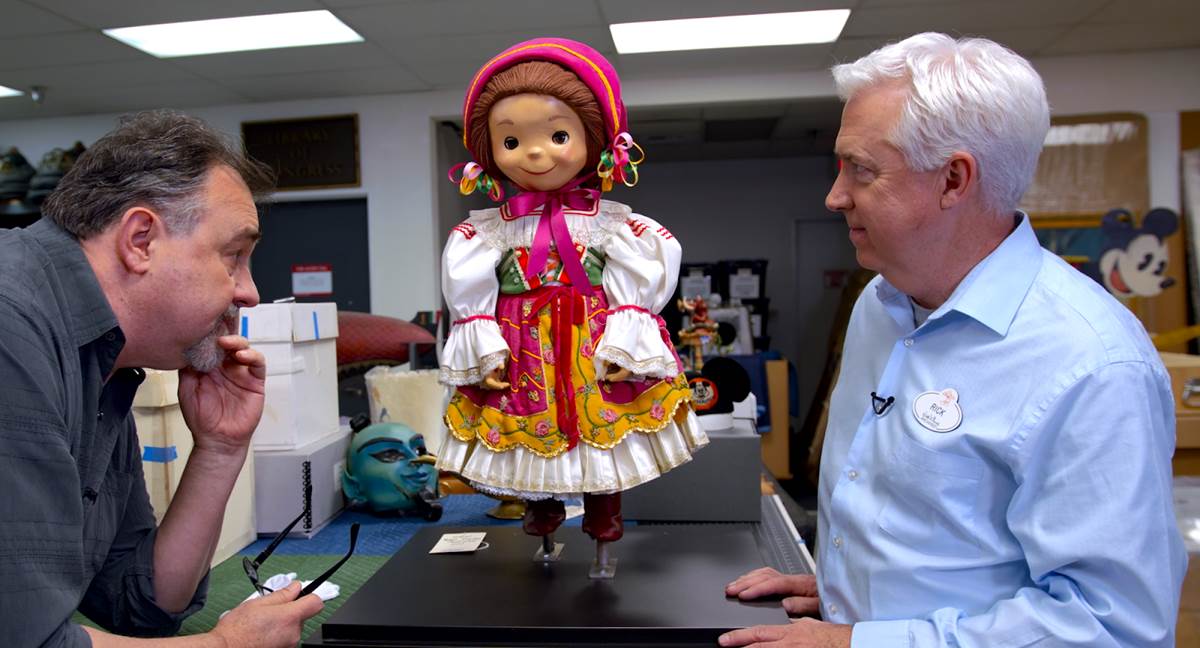 Speaking of things that are coming up, 2023 marks a milestone year, the 100th anniversary of The Walt Disney Company. While the Walt Disney Archives spends a great deal of time looking back, in this case, they’re following Walt’s lead and moving forward. “We're already deeply involved in the company's plans for that,” Becky Cline revealed about the upcoming celebration, which will include a traveling exhibition put together by the Walt Disney Archives. “We'll release a lot more information down the road, so keep an eye out for that, but I'm sure with the 100th anniversary, we're already getting calls from all parts of the company asking for support and materials. There's probably a lot of opportunities and we have a lot of great ideas that I think we're going to try to enact in the next couple of years.” But one thing you can guarantee is that whatever it is, it will connect back to Walt Disney. “We’ve got a lot of opportunities to not only take a deep dive into our past, but also to show what Disney is, and what lessons we took from Walt and what we're doing now and what we'll be doing in the future. We're always trying to come up with new ideas,” Becky Cline concluded.

You can stream Adventure Thru the Walt Disney Archives on Disney+ beginning November 19th.