Anne and the Plantars sure know how to make enemies, and both segments of this week’s episode lead to climactic chases on this week’s Amphibia. 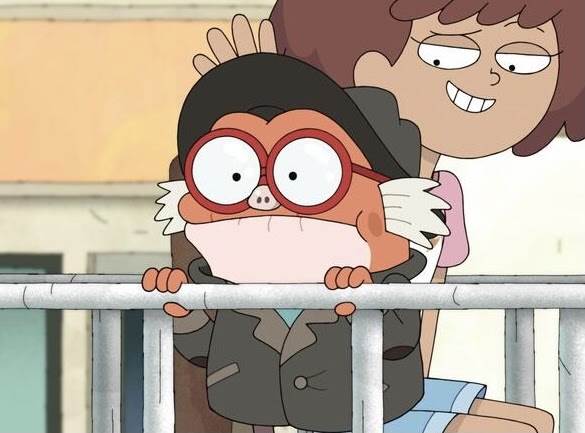 While they are stuck on Earth as we know it, Anne decides to take the Plantars on a special tour through Hollywood. Devotees will recall that Hop Pop has a passion for acting and is also surprised that humans give actors such respect, something that he didn’t experience while he was back in Amphibia.

Early on, we are reminded that Mr. X is after them so they must lay low as best they can, and despite Hop Pop’s interest in acting, Anne reminds him not to pursue it while here on Earth. However, he is already accidentally in line for an audition.

He happens to find himself with a real human doppelganger, almost The Prince and the Pauper style, an elderly actor named Humphrey Westwood (Guest Star Wallace Shawn (The Princess Bride, Toy Story)). The pair have a discussion about acting, and Humphrey is getting called into the audition when he says most actors get a rough start in Hollywood and gives up his spot for Hop Pop. He goes in and gives a poor read, but inadvertently gives up a new catchphrase when saying “Say What?” in shock to the product whose commercial he is auditioning for.

The group all gets home and is stunned to immediately see Hop Pop hawking joint cream on the television. His catchphrase takes on a life of his own, and within hours it seems, he is already on a T-shirt and other merchandise.

But again, they need to lay low, and we see Mr. X catching up on some T.V. binging, when an ad pops up (he didn’t spring for the ad-free subscription) featuring Hop Pop.

The chase is now on as Mr. X discovers where it was filmed, and inconveniently for Hop Pop, he’s already on his way there to accept an offer from the hippest director in town, Mitch Harper, in his office in the studio water tower.

Channeling Pee Wee’s Big Adventure, Hop Pop is making his escape on a golf cart with Mr. X in pursuit, and Anne with Sprig and Polly through the backlot of the studio.

Hop Pop gets enough of a lead, and runs into Humphrey at his day job, a janitor at the studio. Returning the favor, he suggests Humphrey goes to the meeting in lieu of himself. Again with a Prince and the Pauper style switch, Mr. X chases Humphrey into the meeting, only to be disappointed and fooled yet again while Hop Pop and everyone made their escape. 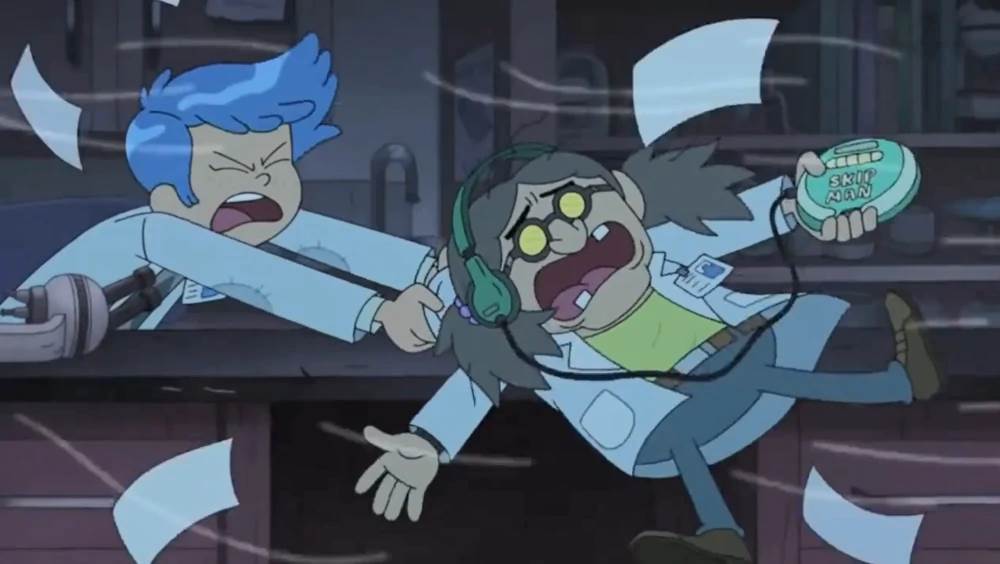 The plantars are very clearly homesick for Amphibia, and Anne is baking them cookies while they are out in their makeshift swamp in the backyard. While they go back to their miniature village they built in the bushes, Anne gets a call from Dr. Jan where she says that she has found a scientist who has been working with string theory and may have some work to show about getting the Plantars back to Amphibia. Most importantly, she mentioned that she still needs to vet this scientist to make sure she can be trusted, so don’t tell the Plantars just yet.

But, thanks to a bit of a guilt trip, Anne breaks and tells the family everything, and they soon find themselves at Dr. Frake’s children’s museum.

While there, the group poses as reporters interested in her real studies, not just the kids' experiments. After some bartering they are let in, where Dr. Frakes explains that only recently did her studies lunge forward when an energy event opened a portal in her equipment, and we see the flashback of Anne, Sasha, and Marcy opening the Calamity Box and being sucked into Amphibia, but also at Frake’s lab, where a skipman was sucked into the energy field. This skipman was seen in a previous episode, “Wax Museum.”

Dr. Frakes explains that she can keep the portal open for a short time, but the magnetic interference doesn’t allow her to get any clean images of it. This portal (based on these blurry images) can clearly gain access to The Boiling Isles as seen in The Owl House, but I digress.

The group thinks they see Amphibia in the images and try to take a look, so Dr. Frakes opens up the portal but when it collapses, creates such an energy burst that it knocks off the disguises on the Plantars, revealing their true frog identity to the Doctor.

Yet again this episode, chase ensues as Dr. Frakes now has proof of the other worlds the portal can access and tries to kidnap the Plantars and dissect them. Terri, her assistant, thinks this is wrong and teams up with Anne to help the Plantars at the cost of her job.

The gang eventually escapes, and Terri takes them all home, suggesting that she will help them build a portal with everything she learned while working for Dr. Frakes.

Problem is, now it seems like Mr. X, Andrias, and now Dr. Frakes are all after the group. Who will be chasing down our friends in the next episode?

This episode of Amphibia is now available on Disney Channel and the DisneyNOW app. You can also catch up with previous seasons of the series on Disney+.