While this episode of The Ghost and Molly McGee is technically divided into two parts, they basically encompass one large story this week. 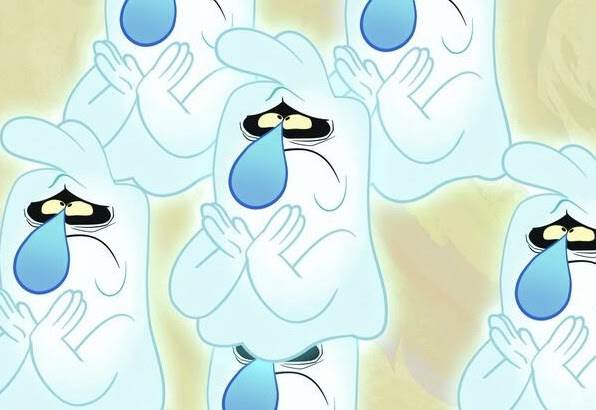 Molly is with her friend Libby when Libby asks how her weekend was. Though the weekend was filled with crazy adventures, she can’t tell her what happened because she cannot talk about Scratch with Libby. Instead, she makes up a crazy story about a hunt for a rainbow ribbon candle that she and her mom went through several towns looking for.

Molly, broken down from all the lying, begs Scratch to let her tell Libby about him, especially so the stress hives will stop. He explains that she can’t because then he’ll be perceived as a friendly ghost, an almost guarantee that he’ll be sent to the Flow of Failed Phantoms by the Ghost Council. Molly’s reaction to this news reminds me that this might be the first time that she learns of a fate that could be bestowed upon him.

She creates an even bigger lie, creating a new persona, the blue-haired Milly who is visiting from Canada. Libby, on to this since the beginning, knows Molly is trying to hide something, but can’t figure out what, and also tries to push Molly to break and reveal herself as Milly. Including bouts with both Maple Syrup (which we learn this episode she has an aversion towards) and close-up magic, which we learned previously is one of Molly’s biggest pet peeves.

Libby makes a surprise appearance at Molly’s house looking for Milly, but her and Scratch had already made their getaway, but some of Scratch’s ghostly gooey remnants (I’m not entirely sure if we can call it ectoplasm here) were left behind for Libby to find.

After a chase throughout town, Libby finally catches up to Molly and she explains that she knows what’s going on. Why, she must have been infected by an Eastern Canadian Brain Slug. Molly explains that she is wrong, and Libby misconstrues this as a rejection she has clearly been through more than once before, thinking Molly doesn’t want to be her friend anymore. After more begging, and with Scratch clearly seeing what has happened before him, Scratch reveals himself to Libby, only for her to faint.

Libby awakens, with her suspicions about the paranormal, at least in terms of ghosts, now confirmed. But now, Molly knows the two can be best friends with each other too. Too bad they can’t. Scratch has already pointed out habits and quirks Libby has that he doesn’t like, and Libby finds Scratch rude and off-putting.

Molly schemes (as Molly does) and gets the two to meet each other at the Softball field, where they embark on a scavenger hunt. Clearly already not able to tolerate each other, Libby and Scratch keep going back and forth on who is Molly’s BEST friend, but they know this whole exercise will make her happy so they put on a show the entire time, sending Molly selfies as they go. The journey also includes a montage of their scavenger hunt activities all to a song that sounds eerily like “The Final Countdown” but it isn’t. The whole endeavor also serves as a recap of the first season of the show thus far, with numerous adventures and storylines being referenced as the two continue to bicker.

Eventually, they find themselves at a turnip farm, where a chain of events caused by the two cause Molly (who has been following them the entire time in very obvious hiding spots) to get pulled into some nearby machinery. About to get diced like a turnip by giant blades, Molly cries out to Scratch, who is summoned whenever she calls his name, and the ghost rubs it in, remarking to Libby saying she is calling for HIS help not hers. Dejected, Libby walks away realizing that he is right. As Scratch tries to save Molly, he can’t figure out the passcode to the doors to get her out of the machinery she’s caught in, as she can’t travel through walls. He realizes he isn’t clever enough to figure it out but he knows who can and chases down Libby as she is leaving. While she wants to hear nothing of what this rude ghost has to say, as soon as he says Molly is in danger she springs into action, and using her knowledge of the history of the town, punches in the town’s founding date and opens the hatch to free Molly, allowing her to escape unharmed.

Libby and Scratch reflect on the trials Molly has put them through over the course of the season so far in a different light, joking and laughing about Molly’s crazy schemes and misadventure. Maybe the two can be BFFs after all!

This episode of The Ghost and Molly McGee is now available on the Disney Channel and the DisneyNOW App. Earlier episodes can also be found on Disney+.