Brighton gets to celebrate two different holidays, Hanukkah and Christmas, in this week’s episode of The Ghost and Molly McGee. 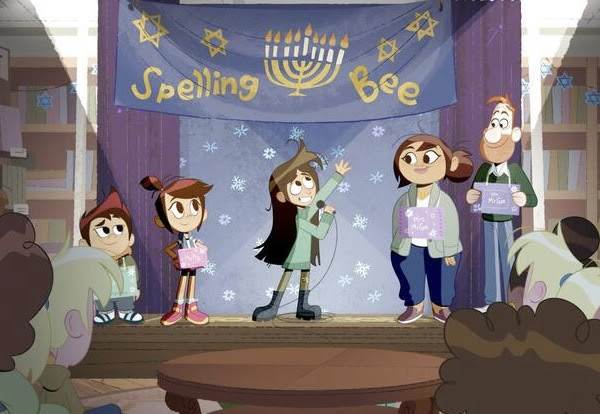 First of all, Libby is on the title card, so I’m guessing this episode won’t be entirely Molly-centric. And it’s not, as it focuses primarily on a Hanukkah celebration at the Stein-Torres family bookshop, “Book Marks the Spot.” Tragically, as the celebration is about to get underway, power goes out in town, but luckily Libby’s mom has a generator and a little bit of fuel. Though, she did leave a note (that she ignored) reminding her to get more fuel for the generator, so they’re not sure how long the lights and warmth will last.

What follows is an hour-by-hour breakdown of the events of the evening, as the gang participates in various Hanukkah food and traditions.

If you’re not familiar, don’t worry, the show gives a brief 101 regarding each of these traditions, as well as a slam poetry (Libby’s secret talent) session about the history of the holiday itself.

Where the episode shines is the combination of heart and humor. In the first few “hours,” the usual jokes centered around Scratch’s appetite and Molly’s over-exaggerated optimism are quickly pushed aside as Libby recites her poem to the town, and we learn more about the Stein-Torres family menorah and its origins.

Through a flashback scene, we see how the menorah has been handed down generation to generation, with depictions of Libby’s great-grandparents all the way to her mom. Who, we learn earlier in the episode, considers Libby to be her miracle for the year. Scratch had the most heartfelt miracle revelation, saying that “I used to haunt a house, now I haunt a home.” Darryl, of course, revealed the very vague “It’s a miracle I didn’t get caught.”

The menorah segment is all brilliantly done in the 7th hour, (after Libby’s slam poetry about the holiday in hour 5) so that by hour 8, it's easy to draw the parallels between the holiday and the episode’s format. As the generator finally gives out, the lights come back on in Brighton, but all the folks who came in to Book Marks the Spot for warmth and light stay behind for more fun and festivities, while Scratch continues to enjoy the Latkes.

Molly pleads with the Mayor, there must be some way they can save the town’s celebration. The Mayor explains he spent all the money on the tree and the extra two inches, so Molly approaches the wealthiest man in town, Mr. Davenport, Andrea’s dad and owner of Davenport’s Department store.

However, Davenport declines as it will make him trend online but won’t increase his profits. As Molly pleads, Andrea agrees with her since she was supposed to be the Snowflake queen like her mom was before her.

Back at home, Molly is scheming and trying to figure out a way in which to convince Davenport to fund the festival when a lone reference to Charles Dickens’ A Christmas Carol occurs, prompting a whole adventure wherein Scratch plays all three ghosts showing Scrooge (This time played by Davenport) his life and how he can fund the Snowflake Celebration. The “visions” Scratch and Molly provide only justify Davenport’s belief in making money, not merry. Now, Molly retreats home, broken and giving up on Christmas.

This upsets Scratch more than anything. Davenport broke the unbreakable Molly McGee ON CHRISTMAS! Scratch blasts out of the house and back to Davenport and introduces him the non-hashtagable lengthy title of “The Ghost of I’m gonna scare the Christmas Spirit into your rotten carcass.” While Scratch tosses Davenport around town, they end up back at the Davenport residence and Davenport surprisingly asks Scratch to stop, as he peers into the window of his daughter, Andrea, who is visibly devastated that she can’t be the Snowflake Queen. He gets emotional, saying she looks exactly like her mother, and realizes that his dad was a great businessman, but not a very good dad.

Wanting to be different, Davenport agrees to fund the Snowflake Celebration, and he leads the parade with his daughter as the Snowflake Queen, and much to his delight, he’s trending on social media. The town is happy again (though, surprisingly we didn’t see any meter adjustment from the Ghost Council) and we close out this episode, not with a punchline like others, but with the McGee family and Scratch all hugging as they celebrate the holiday.