The Gang is back – Dennis, Dee, Frank, Mac, and Charlie have weathered the storm that was 2020 and armed with their toxic ignorance, for these five individuals, It’s Always Sunny in Philadelphia. The hit FX sitcom, now in its record-breaking 15th season, returns on December 1st with double-stacked episodes on Wednesdays in December. This season doesn’t just find the owners of Paddy’s Pub dealing with the consequences of their actions, but also taking a trip abroad to discover their roots. 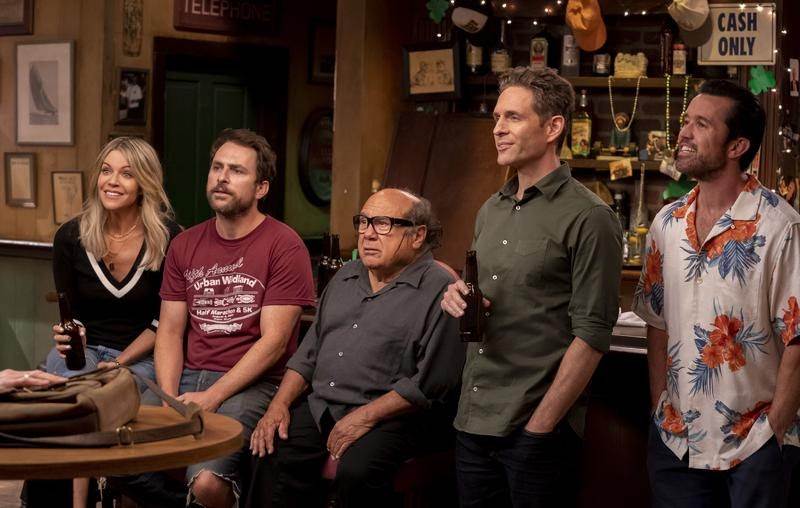 Part of the irreverent charm of It’s Always Sunny in Philadelphia has always been messages of morality buried in plotlines of characters doing the wrong thing. Many fans were upset when several episodes were pulled from Hulu and syndication, one of which was “The Gang Makes Lethal Weapon 6.” This season addresses the issue brilliantly in a follow-up episode that is true-to-form laugh-out-loud funny while also finding the gang proving how little growth they’ve made in their quest to appear woke.

Much of the marketing has focused on the trip abroad and for good reason, it takes over the second-half of the season. The show acknowledges the pandemic through the travel episodes, with The Gang’s signature irresponsibility guaranteed to shake things up in the Emerald Isle. These episodes become character redefining moments and Glenn Howerton, Kaitlin Olson, Danny DeVito, Rob McElhenney, and Charlie Day prove themselves to still be at the top of their game 15 seasons later.

It’s Always Sunny in Philadelphia may be a little more apologetic than normal this season, but it’s still crass and offensively hilarious. The team is certainly working within new boundaries of what is acceptable for The Gang to do, but in some ways it feels like it’s required even more creativity. More importantly, it doesn’t feel as watered down as it otherwise could have. Dennis is still a predator, Dee is as self-absorbed as ever, Frank is the worst businessman on Earth, Mac’s identity crisis is out of control, and Charlie… well, Charlie is still Charlie.