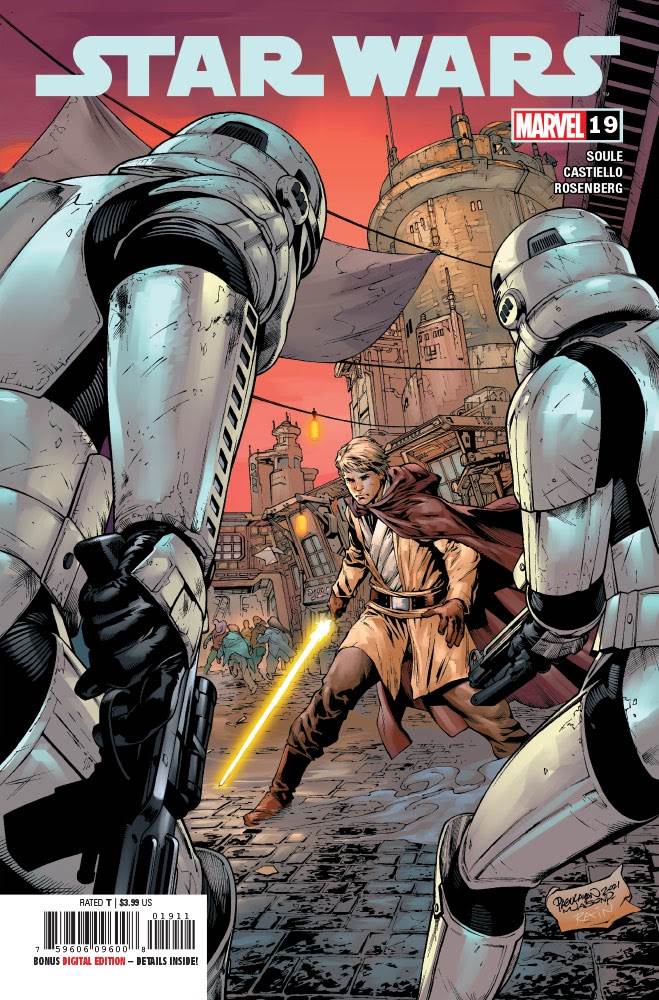 It’s interesting that this past summer’s War of the Bounty Hunters comic book miniseries got so many repetitive tie-in issues from Marvel’s other ongoing Star Wars titles, but its follow-up Crimson Reign is being treated quite a bit differently.

Issue #19 of the second volume of Marvel’s main current-canon Star Wars comic references the events of Crimson Reign #1 (Admiral Ackbar mentions the syndicate war that Qi’ra and Crimson Dawn ignited in that title) but it’s not labeled as a crossover. I think I vastly prefer this approach, as it means we likely won’t need to see the same actions play out over and over again like we did in War of the Bounty Hunters. 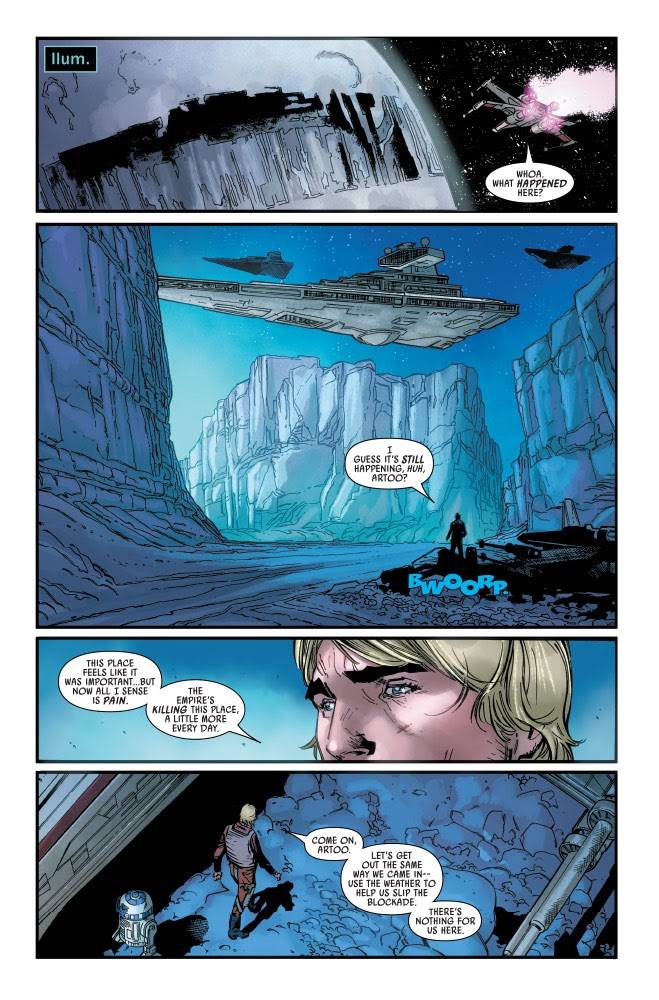 Star Wars #19 begins with the above-mentioned Rebel Alliance briefing, where Luke finds himself distracted by the list of possible Jedi holy sites that R2-D2 found in an old Imperial archive. Leia gives him permission to leave, so Luke sets off on a quest to see if he can track down any more ancient Jedi temples. It’s obvious that this path will eventually lead him to discover Ahch-To– either in these pages or sometime after the events of Return of the Jedi– but for now he visits Ilum (which is evidently already in the process of being transformed into Starkiller Base), Arashar (which is overpopulated by an Imperial Star Destroyer occupation), and Lothal (where he apparently doesn’t possess the right Force “key” to open the temple Ezra Bridger entered in Star Wars Rebels) before settling on the River Moon of Al’doleem, first seen in writer Charles Soule’s Star Wars: Darth Vader – Dark Lord of the Sith comic book from 2017. It’s no coincidence that Soule is also the writer of this particular story arc, and I absolutely love that he’s choosing to go back and revisit familiar locations to dig up relics of the past. On Al’doleem we get flashbacks to Vader’s seek-and-destroy mission against Jedi Master Kirak Infil’a just after the conclusion of the Clone Wars, and Luke meets a friendly mechanic who’s justifiably willing to help him figure out what the Empire wants from the local Jedi monastery. 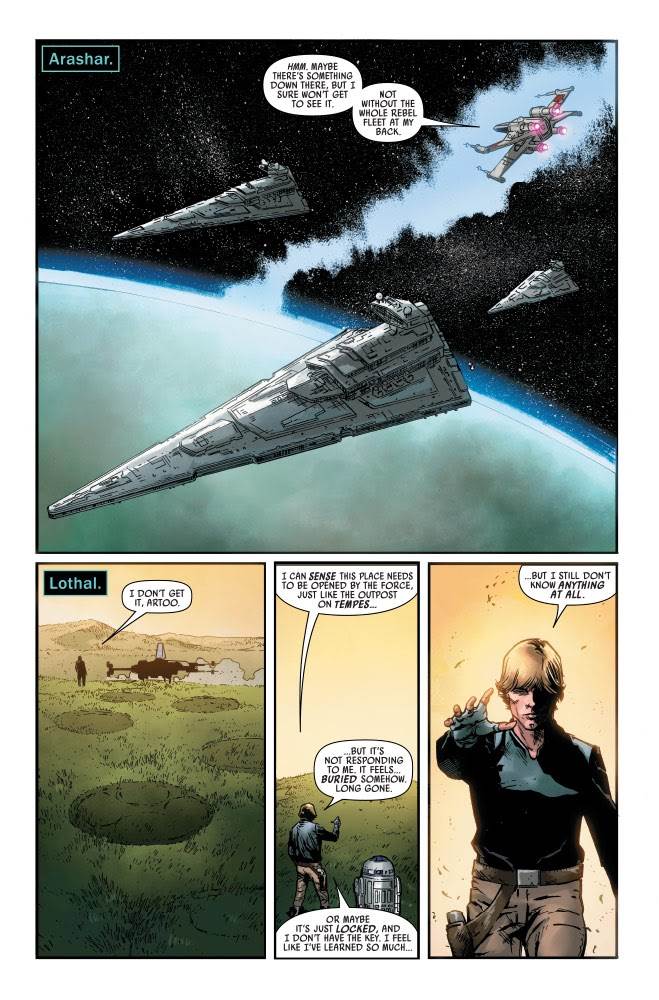 Luke has a fairly notable arc along his personal journey to becoming a Jedi himself in this episode as well, but I won’t spoil that here except to say that his powers advance closer to the level we see them at in Jabba’s Palace on Tatooine. There’s also a spine-tingling bit of foreshadowing to Star Wars: The Last Jedi and a great cliffhanger that has me wondering how this arc is going to continue to unfold. But this issue also raises an interesting question: have we been given sufficient reason why Luke isn’t simply returning to the planet Dagobah to continue his training with Yoda at this point in the timeline? He says Yoda isn’t speaking to him (I guess he means via the Force) but I wasn’t under the impression that he needed an invitation. Regardless, on the whole I thought this issue was a wonderful way to kick off a new storyline post-War of the Bounty Hunters, and this arc brings in new artist Marco Castiello (Dark Horse’s Star Wars: Rebel Heist), whose style perfectly matches the tone Soule seems to be going for. Plus, any Star Wars comic issue that features a list of names in Aurebesh for me to translate always– pretty much instantly– wins me over. 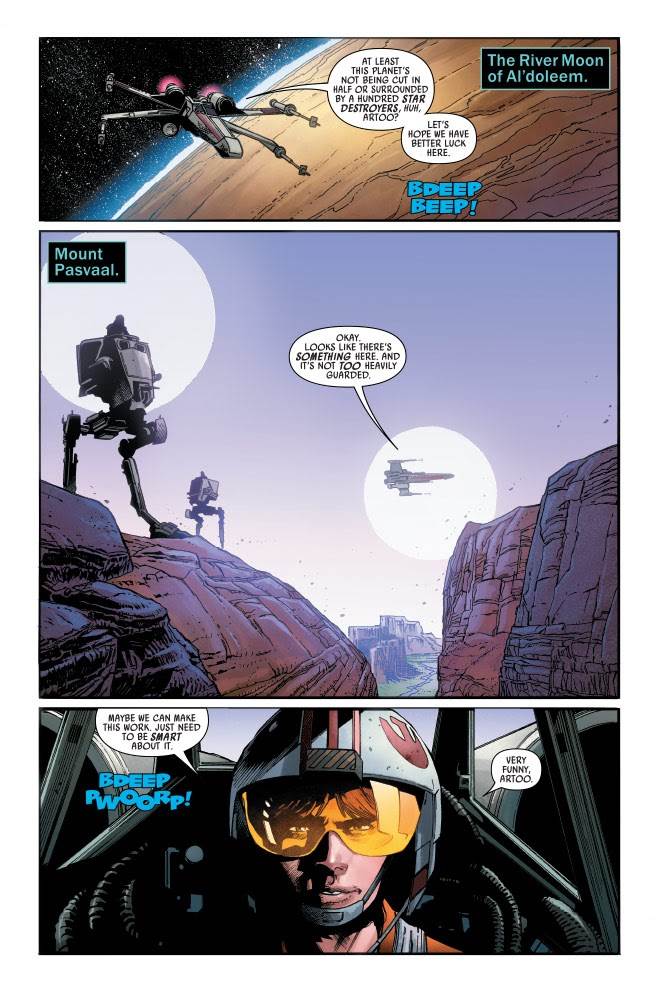 Star Wars #19 is available now wherever comic books are sold.