Hollywood historian, film critic, and Disney fan Leonard Maltin recently joined the Walt Disney Family Museum for an hour-long virtual conversation about his career and new book, Starstruck: My Unlikely Road to Hollywood. Held on December 15th, the event included a moderated conversation with the virtual audience, giving fans of Leonard Maltin a chance to ask him questions about his Disney work. As a child, Leonard Maltin was exposed to classic films and shorts through their television broadcasts. With few books published about filmmaking, one of them being Bob Thomas’ The Art of Animation, the young fan started his own fanzine about film, using a minigraph machine to produce it and mailing it out to subscribers. Leonard Maltin was sick and home from school the day Walt Disney died, hearing the news on the radio and feeling like he needed to do a special piece in his fanzine. Using the phonebook, he called the Walt Disney Productions office in New York City and spoke to publicist Arlene Ludwig for the first time (daughter of Irving Ludwig, who ran Buena Vista Distribution for Disney), who became a lifelong friend of his. She sent him photos to include with his annotated filmography of Walt Disney.

First published in 1973, Leonard Maltin spent two years writing The Disney Films, a comprehensive book about Walt Disney’s film career, with essays and information on every theatrically released feature film produced during his lifetime. “There was a continuity to his career,” Leonard explained about what set Disney’s filmography apart from other studios, even family-run ones like Warner Bros. He explained that with the family atmosphere at Disney, by the 1960s, it had become a multigenerational place of employment for families. On top of that, Walt Disney was the most recognizable movie mogul thanks to his weekly TV appearances. Three revised editions of The Disney Films were published, most recently in 2000, adding chapters about each decade of post-Walt studio output.

As an expert on Disney’s film and television output, Leonard Maltin pitched an idea to the company to commemorate Walt Disney’s 100th Birthday, a DVD collection of classic content with hosted introductions and behind-the-scenes bonus features. Greenlit by then Studio Chairman Dick Cook, the Walt Disney Treasures series allowed Leonard Maltin to curate collectible box sets of content Disney fans thought might never be released. One of the highlights for Maltin was “On the Front Lines,” a collection of World War II shorts and the feature film Victory Through Air Power, all of which had been marked “Do Not Show” at the studio.

After nine waves of releases, the Walt Disney Treasures series came to an end in 2009, the same year Dick Cook left the company. “He was the godfather of that series,” Maltin explained. “He was the reason it got made and when he left, there was no one to champion the series.” Fans have often wondered what might have been if the series continued, but the truth is that there were no concrete plans for additional releases when the series ended. However, Leonard Maltin did have ideas, one of which would’ve collected all of the “I’m No Fool” shorts from The Mickey Mouse Club, accompanied by some of Disney’s educational films that spun off from it.

The last wave of Walt Disney Treasures releases gave fans the complete television series Zorro starring Guy Williams, in its original black and white. The timing of the event came on the heels of the announcement of a reboot starring and produced by Wilmer Valderrama. “He’s an incredibly appealing character,” Leonard Maltin shared about “The fox so cunning and free,” who has been adapted on screen by numerous actors and companies over the years. “All the ingredients are there for great stories and there’s no reason they shouldn’t be done again.” As a fan of the Guy Williams series, Leonard Maltin is optimistic that the new take will be done right. “I would be glad to see somebody tackle it again if they do it with heart, if they do it with real commitment to the values and ideals of the series.”

A fitting part of the conversation was spent on Diane Disney Miller, Walt Disney’s daughter who co-founded the Walt Disney Family Museum with her husband Ron Miller. Leonard Maltin first met Diane at Disneyland while participating in a panel discussion for Walt Disney’s 100th birthday. She had been asked about myths about her dad that she wanted to lay to rest and someone else made a joke, causing the audience to laugh so loudly that Diane couldn’t be heard. When the laughter quieted, Leonard asked Diane to repeat what she said. “Well, he’s not frozen,” she exclaimed, receiving a laugh of her own. “I was blessed to call Diane Disney Miller a friend,” Leonard Maltin shared, adding that an entire chapter in Starstruck: My Unlikely Road to Hollywood is about how he got close to Walt Disney without ever meeting him through interviewing people who lived and worked with him. If he could go back in time to meet anybody, it would be Walt Disney.

The Walt Disney Family Museum has made the entire event available on YouTube if you’d like to experience the full conversation. Starstruck: My Unlikely Road to Hollywood is now available and you can listen to Leonard Maltin and his daughter Jessie Maltin through their podcast, Maltin on Movies. Visit WaltDisney.org for more information about the Walt Disney Family Museum and future special events like this one. 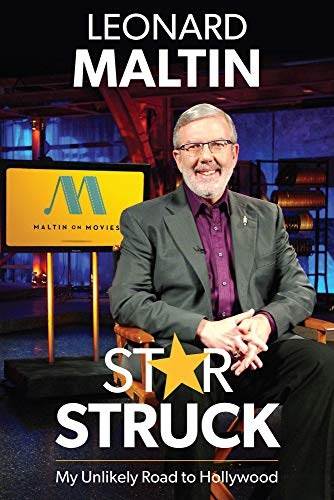