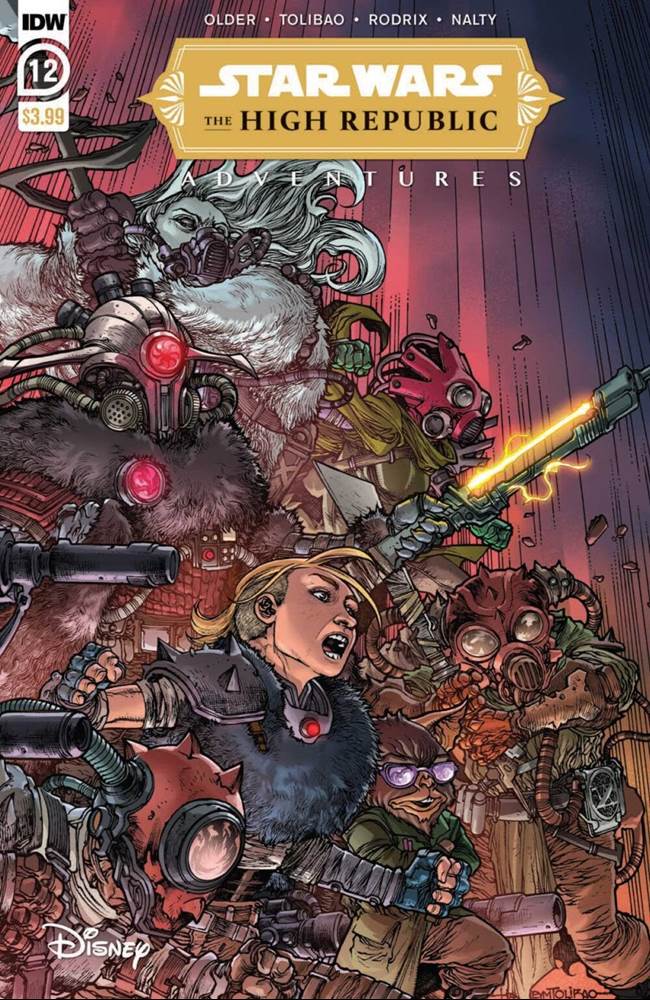 I get the feeling that writer Daniel wants his Jedi characters to have their cake and eat it too. As anyone who’s seen the Star Wars prequel trilogy is undoubtedly aware, Jedi are forbidden from entering into romantic relationships, for reasons that should be obvious (read: Darth Vader).

But early on in issue #12 of Star Wars: The High Republic Adventures from IDW, Older has Jedi Master Kantam Sy walk back that particular guideline by saying, “The Jedi must not be ruled by our feelings. But that doesn’t mean we don’t love or care about anything. The opposite, really. We must learn to love and let go at the same time.” To me, it comes across as a convenient way to skirt a long-established rule of the Jedi Order and have some of The High Republic’s characters fall in love with each other without any real consequence… or maybe this is a decree that becomes more strictly enforced by the time we get to the era of the Skywalker Saga due to something bad that happens as a result of these actions? I have to admit I kind of hope it’s the latter, because otherwise a lot of this love-story stuff feels shoehorned in for lack of other, more compelling interpersonal drama. Regardless, The High Republic Adventures #12 is otherwise orchestrated as a climax for the yearlong narrative that began in the series’ first issue– namely the pursuit of Krix Kamerat, the childhood friend of the Force-sensitive Mikkian Zeen Mrala who has become a companion of the Jedi since they helped her defend against a Nihil attack on her homeworld Trymant IV. Overlapping with the events of Older’s upcoming young-adult novel Star Wars: The High Republic – Midnight Horizon, this issue begins with the Jedi preparing for an investigation of a potential Nihil incursion on Corellia. Then a call comes in from a scout who has narrowed down Kamerat’s location to the Outer Rim planet of Dol’har Hyde (pretty cleverly established in the pages of the Doctor Aphra comic some months ago). Padawan Lula Talisola takes Zeen and some other Jedi Knights to capture Krix, but naturally they encounter some resistance along the way and a battle erupts over Dol’har Hyde’s surface, followed by a chase through a series of perilous underground tunnels. The art by illustrators Harvey Tolibao and Pow Rodrix is all about action, explosion, and lightsabers depicting some fairly exciting plot developments, but the inner dialogue between Zeen and Lula fixates almost entirely on their burgeoning feelings for each other. Their connection via the Force does help them (SPOILER ALERT) capture Kamerat in the end, but by the last panel they’re so wrapped up in their shared emotions that they can’t seem to focus on anything else. I can’t help but wonder if we’re supposed to be happy for them or extremely worried, knowing what happens to Anakin Skywalker a couple hundred years later in the timeline. Again, I’m crossing my fingers it’s the latter, because that would be way more interesting (and just a whole lot more Star Wars) than “these people are in love and they’re going to live happily ever after despite all previous evidence to the contrary.” For now I’m going to optimistically assume that Older has something else up his sleeve, and simply look forward to finding out what happens next now that the Jedi have Krix Kamerat in custody. 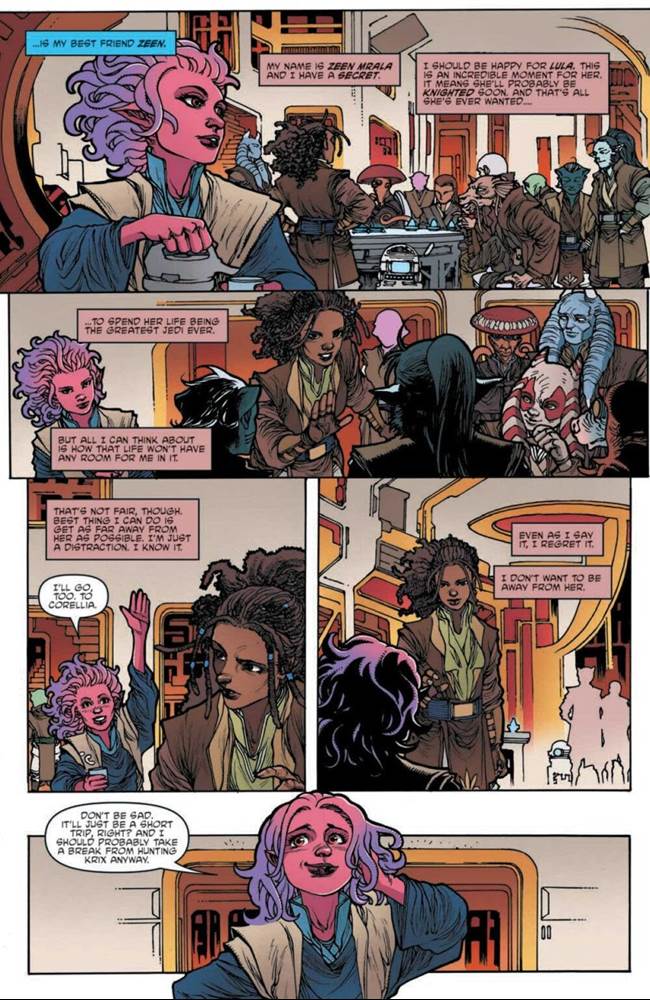