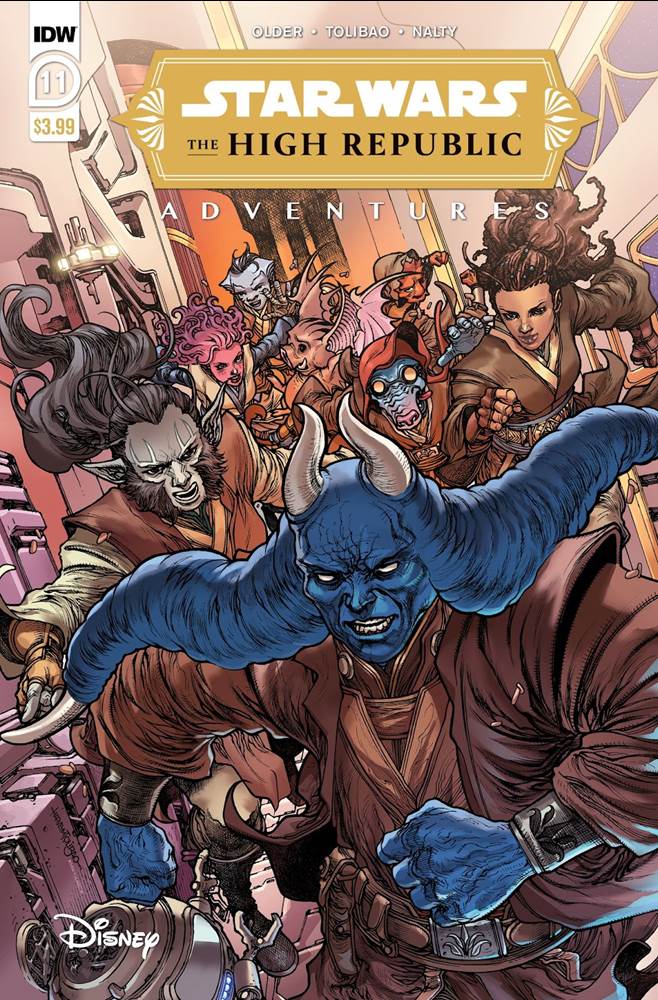 Star Wars: The High Republic Adventures #11 from IDW takes a much-needed break from the intrigue, tension, and battles between the Jedi Order and the Nihil by having its characters participate in something called the Great Jedi Rumble Race aboard the Starlight Beacon space station.

In The High Republic Adventures #11 begins with Jedi Padawan Lula Talisola meditating on the recent events in her life and the disquiet growing inside her, until she is interrupted by her friend Zeen Mrala and the news that the infamous race is about to begin. 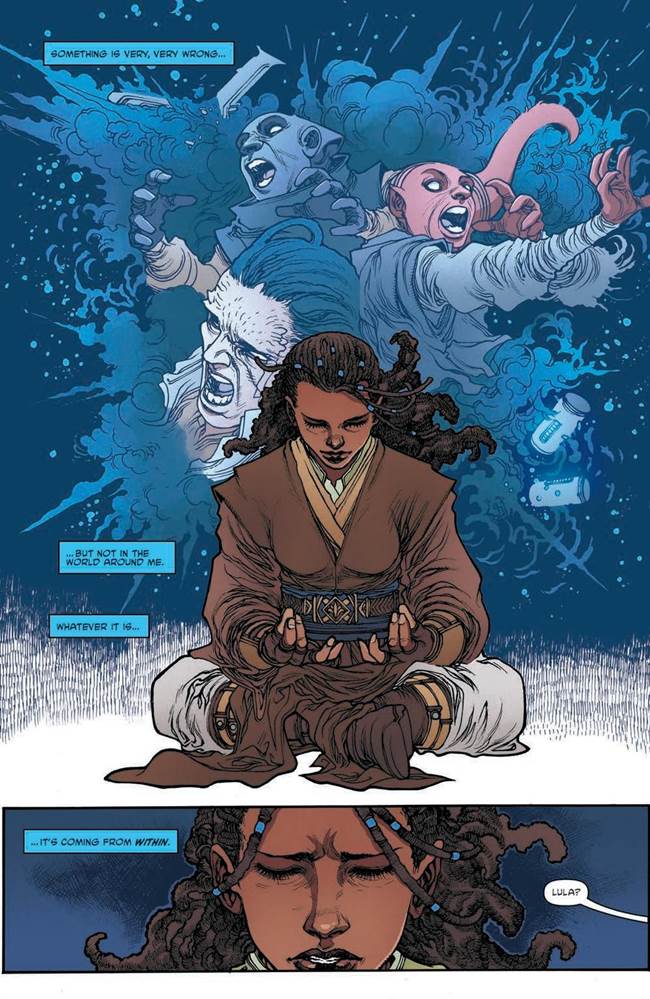 There isn’t a tremendous amount of in-universe history given for the Great Jedi Rumble Race, except for the fact that Jedi Master Torban “Buckets of Blood” Buck is undoubtedly the one most excited for it among the dozens of Jedi stationed on Starlight Beacon, up to and including the young Padawans. “There are no rules!” exclaims Buck, just before he sends all manner of Jedi careening through the halls of the station, whether running, jumping, or– in the case of Ram Jomaram– riding on modified droids. Meanwhile, we check in with Zeen’s childhood friend Krix Kamerat, now a bigwig among the ruthless band of marauders known as the Nihil, who is on Corellia planning the barbarous group’s next big move against the Jedi. Krix negotiates the details of the scheme with a being called Respriler and his cohort Sabata, both of whom start plotting Kamerat’s downfall as soon as he’s out of earshot. It seems working among the Nihil is a dangerous proposition, even after you’ve managed to gain a foothold of respect in the organization. 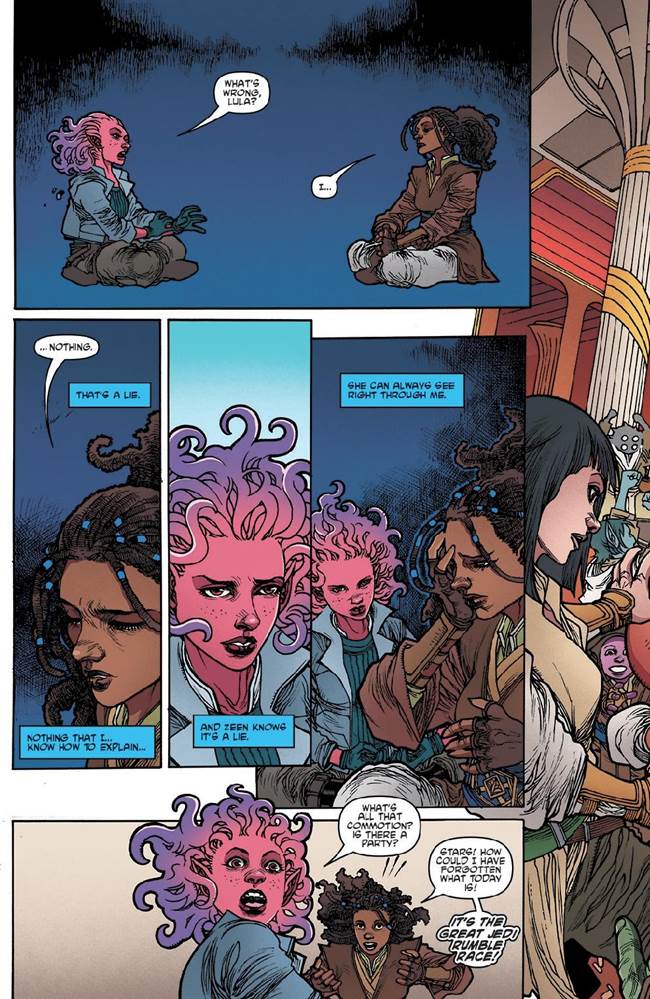 The Great Jedi Rumble Race proves to be a fun diversion, both for the Starlight Jedi and the readers of The High Republic Adventures, but I don’t think its outcome will be very consequential for much except helping us get further inside Lula’s head as she reveals her various current worries via inner monologue text boxes. The infighting among the Nihil comes across as a bit more meaningful in the long term, and I’m pretty curious to see what treachery they’re planning and how Corellia (which will become the birthplace of Han Solo a couple centuries later in the timeline) factors in as a central location. In the meantime, I’m glad to see that writer Daniel José Older is keeping things lively and fresh in his plotting and dialogue, while returning artist Harvey Tolibao’s style still feels appropriate for the tone Older is trying to convey. The cover of next month’s issue sure makes it seem like the action picks up again as this story continues, so it’s nice for these characters to have a breath of downtime before that happens. 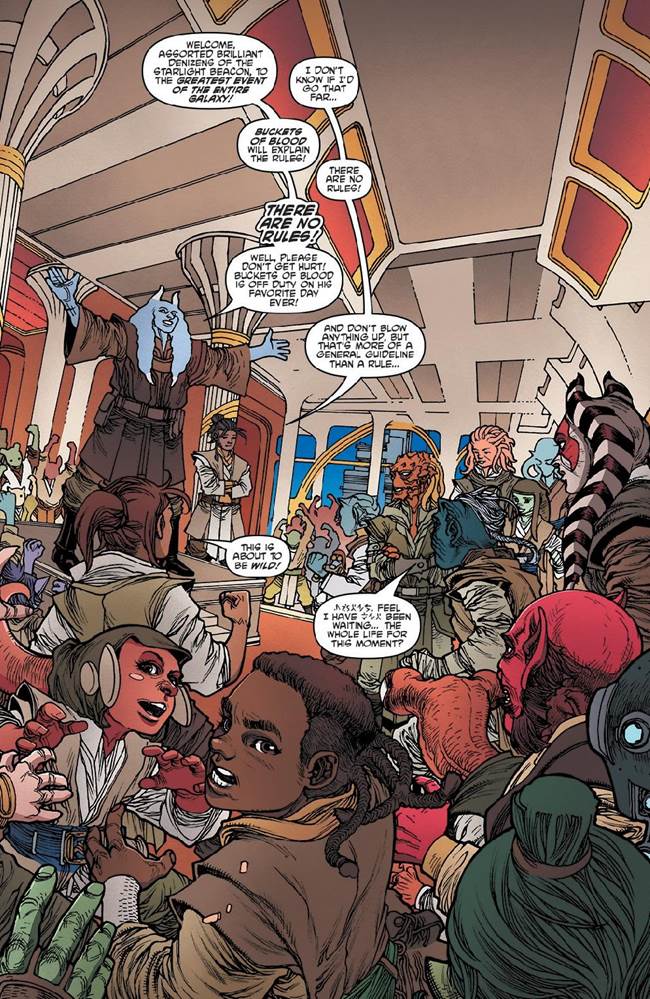