Part of the appeal of every Disney Junior series is the music that gets kids singing along and dancing. John Kavanaugh is no stranger to longtime Disney Junior viewers, having lent his songwriting talents to both Sofia the First and Elena of Avalor. His newest project is Alice’s Wonderland Bakery, which takes a new generation of kids down the rabbit hole into the fabulous world of Wonderland. I had the pleasure of speaking with John ahead of the show’s premiere about his work on the series and beyond. 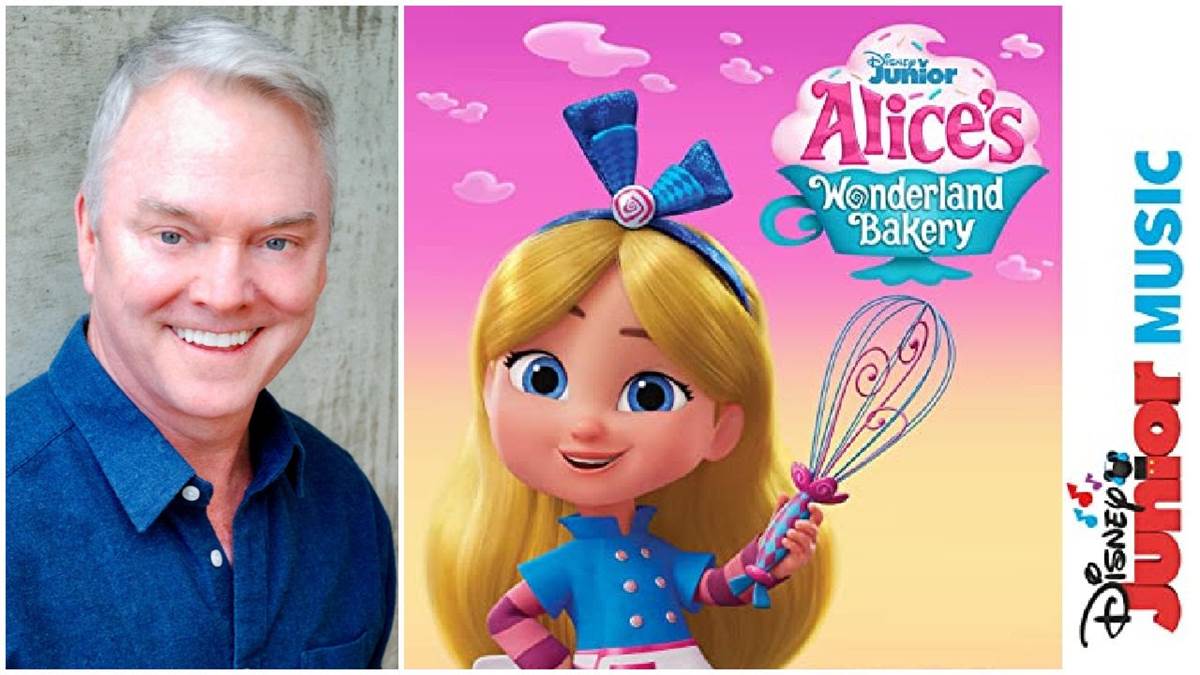 Alex: Congratulations on the launch of Alice's Wonderland Bakery. Were there any lessons that you learned on Sofia the First and Elena of Avalor that helped you prepare for bringing the world of Wonderland to life for a new generation?

John Kavanaugh: Well, I'm sure the day-to-day routine and working with the actors and the kids through the years, that experience certainly adds up. But I think not only that, but just my whole career with Disney from… I went to college in Orlando in Winter Park, so I started working for Disney when I was just barely out of my teens. And all of that experience with the magic that is Disney certainly carries me forward. And Sofia and Elena were quite memorable experiences for me. And I'm terribly proud now to be a part of Alice.

Alex: Were you a fan of the 1951 animated Disney version of Alice in Wonderland, being that you've been in the Disney universe for so long?

John Kavanaugh: I wasn't as familiar with it until this project came up, but I certainly had been very familiar with all the music. And working for the parks through the years, those tunes were always a part of all the shows we did. And live shows we did with great singers, we would sing really fabulous versions of those original songs. So for sure, the music.

Alex: What has your Disney experience been so far in your career leading up to now?

John Kavanaugh: Well, when I was just out of college, I started to play the piano with Disney World for live shows and helped musical direct for live shows with live singers. So basically, vocal coaching and rehearsal pianist and playing in the park; in front of the castle. And I came out to California and did the same and little by little started writing songs and shows for Tokyo Disney and Disneyland, and eventually started writing for Sofia the First. So it just kind of happened little by little.

Alex: Are there any specific Disney Park shows that really stick out to you that were highlights of your time there?

John Kavanaugh: Gosh, there's so many. I wrote a couple of theme songs for the parks in Tokyo, Tokyo Disney Sea, and some Japanese pop stars sang them, so I was very big in Japan for a while. But definitely working for Disney Junior with Sofia was a fantastic turning point, and I was so honored.

Alex: Did you sample or borrow any bits of music from the 1951 Alice in Wonderland for the show?

John Kavanaugh: Well, actually every 22-minute episode has at least one new original song by Chelsea [Beyl]'s team and myself. And we have recurring songs that we wrote, new songs that come back so that the kids can sing along. And so, we pepper recurring songs in with the totally new ones that they hadn't heard yet. But throughout the series, occasionally we do use some of the original tunes, which are so fabulous. And the older audience would know them. And in perfect spots; when it's a perfect moment for one, we'll spice up the score with bits of that. And I know Matt Margeson, who's doing the underscore, is adding little quotes here and there as well, when it's appropriate. And I think it gives it such a depth, that we're not ignoring the tremendous history of the project or the franchise. It would be silly, I think, to ignore it.

Alex: The original film didn't have just one songwriter; it had a lot of them. What other support or help do you have with bringing these songs to viewers?

John Kavanaugh: Well, Chelsea Beyl created this version of Alice, and she's a tremendous lyricist. And all of her writers work with her on their scripts and write lyrics that fit into their specific stories, under Chelsea's direction. And so, that's basically the songwriting group. I take care of the music and tweak little things here and there, but the lyrics are just in great shape when I get them. And then, we have a huge team of Disney music peeps that guide us and help us along. And then we record them, of course, with the best musicians we can find in Los Angeles. So I'm, again, very blessed to work with this crowd. It's really something.

Alex: Did you just say you're writing to lyrics versus the other way around?

John Kavanaugh: Yes. Interestingly, for my experience with Disney Junior projects, the lyrics are written to some extent and to various degrees based on the scripts they're in. And they carve out appropriate spots for us. "Well, let's put the song at the top of the episode and start it off with a bang and show them this neighborhood or that house or this…" And so, when I get the script, I already know where the song's going to be. And in general, very soon after that, there'll be a lyric sent my way. And I'll be set off and running.

Alex: Do you find that process easier or harder? I know most songwriters like to write the song first and then fill in the lyrics.

John Kavanaugh: I've done it so long like this and worked with lyricists my whole life. I actually studied music and writing music and lyrics at the BMI Workshop in Manhattan, when I was in my young twenties as well. And I can certainly do that, but when you get a great lyric, it takes you to a place musically that you might not have gone on your own. So, it's a challenge, and it always comes out to be something new and something different. So, I love it, and I'm used to it. And again, they're sending me great stuff, so hopefully I'm sending great stuff right back.

When it comes to theme songs, I'm sure there's a lot of added pressure to make it catchy and something that you can hear over and over again and not get sick of. But you also had to write “The Baking Song.” As you mentioned, it gets replayed most episodes. Was that harder than writing a theme song? Is it more work? Do you spend a lot more time on it than a song that might just appear once?

John Kavanaugh: Obviously, we know it's going to reappear a lot. And actually, Alex, there are several songs that we use in the way you're speaking of with “The Baking Song.” So, Baking Song's in a lot of episodes at the top, but throughout the season, we have other songs that start to recur as well. We know they're going to recur, so we certainly want them to be catchy and fun, and we want the kids to be able to grasp them quickly and sing along.

Alex: There's a soundtrack coming out as well. Do you have a hand in picking which songs make it to the soundtrack, or is that a completely separate team that you don't have involvement with?

John Kavanaugh: I know Disney Records picked a group of songs that they really liked, and we had a few alternate choices that were discussed. But I think we went with exactly what they wanted, which is a group of songs at the top of the season, which show off a lot of different characters and a lot of different styles. So, I was thrilled with what they brought to the table. And so, I can't wait for it to come out. I think it comes out on the 11th, a couple days after we premiere.

Alex: What's been your favorite part of the Alice's Wonderland Bakery experience so far? I know it's a weird time to be creating content.

John Kavanaugh: It is. To be completely blunt, I just think working with Chelsea, she's just remarkable. I have so much admiration for her talent, and I'm terribly honored to be a part of this franchise to add to… Sofia and Elena were new projects, and I love that we got to create them from scratch. But to have this history of Alice in Wonderland from the fifties, to try to take it forward and push it forward and introduce it to kids that have never really maybe heard it of the original, I feel a sense of responsibility of course, but great joy that hopefully our songs and these stories that they're writing will last and be a part of the Disney songbook and the legacy of this property. I really am so thrilled to be a part of it.

You can hear John Kavanaugh’s music in Alice’s Wonderland Bakery, now airing on Disney Junior and streaming on Disney+. The main title theme is now streaming on all major platforms and a soundtrack will be released in the near future.