Recently, Pixar Animation Studios dropped their full trailer for their upcoming film, Lightyear, and in only 2 minutes of cleverly crafted editing we are ready to go to infinity and beyond with the new film this June. And while the Toy Story fan (although this is NOT a Toy Story movie) may have caught an easter egg or two, more comes to light with a few repeat viewings of the trailer. If you haven’t watched it yet, do so below now before we break into a few things.

So what do we know so far? Truthfully, as with most Pixar fare at this stage, not a whole lot. Based on the trailer alone, we know that this space hero is set on an adventure to get off a planet that he and his team have been marooned on for quite some time, before a launch seemingly takes him to a place that wasn’t his intended destination. There, he comes face to face with some antagonistic villain types and must defeat them to get back on his way.

However, there is more to this than meets the eye. Lightyear already has a built in backstory that most fans are already acutely aware of. Despite the fact that, and I can’t stress this enough, this is NOT a Toy Story film, Director Angus Maclane and Pixar head Pete Docter have openly stated numerous times that idea behind this movie is that this is what Andy saw that made him (and the rest of the kids in the first Toy Story film) want the Buzz Lightyear toy. So, it already comes with a built in backstory that we’ve seen semblances of before in Toy Story, Toy Story 2, as well as the animated television series, Buzz Lightyear of Star Command. When it comes to the trailer, we already know what’s going on in a way, but we won’t get the full story until the film is released in June.

“I need to repair my turbo boosters. Do you people still use fossil fuel, or have you discovered crystallic fusion?”

Back in 1995, when Buzz Lightyear (the toy) crash landed into Andy’s bedroom, not only was he blissfully unaware that he was in fact, a toy, but he also gave us a quick look into how his ship was powered. While it may have been just a quick little joke over 25 years ago, now as Lightyear is giving us the serious version of the character, we get a quick glimpse of what appears to be a crystallic fusion power cell. As a fan of the parks, I must also point out crystallic fusion power cells are also a key point in the Buzz Lightyear Astro Blasters and Space Ranger Spin at Disneyland and Magic Kingdom respectively, though they don’t look like what we see in the trailer.

Buzz also retrieves this power cell from a helpful robot that looks awfully like something that would be seen aboard the Axiom in Wall-E, and while this isn’t a direct easter egg, Wall-E bots are something I will definitely be looking out for in this film now.

In the trailer, we are introduced to Sox, Buzz’s robot companion who, just based on the reaction from the trailer, is ready to steal the show and will likely be part of a merchandising blitz that might be more appealing to adults than to kids if done right. Once you look past the wide-eyed cuteness of the robotic kitty and look at when Buzz first met him. His reaction is fairly similar to that of when his toy counterpart first met a sheriff when he crash landed in the alien world of Andy’s bedroom. Only that time, he had a laser (little light that blinks) and not just the action packed karate reflex. 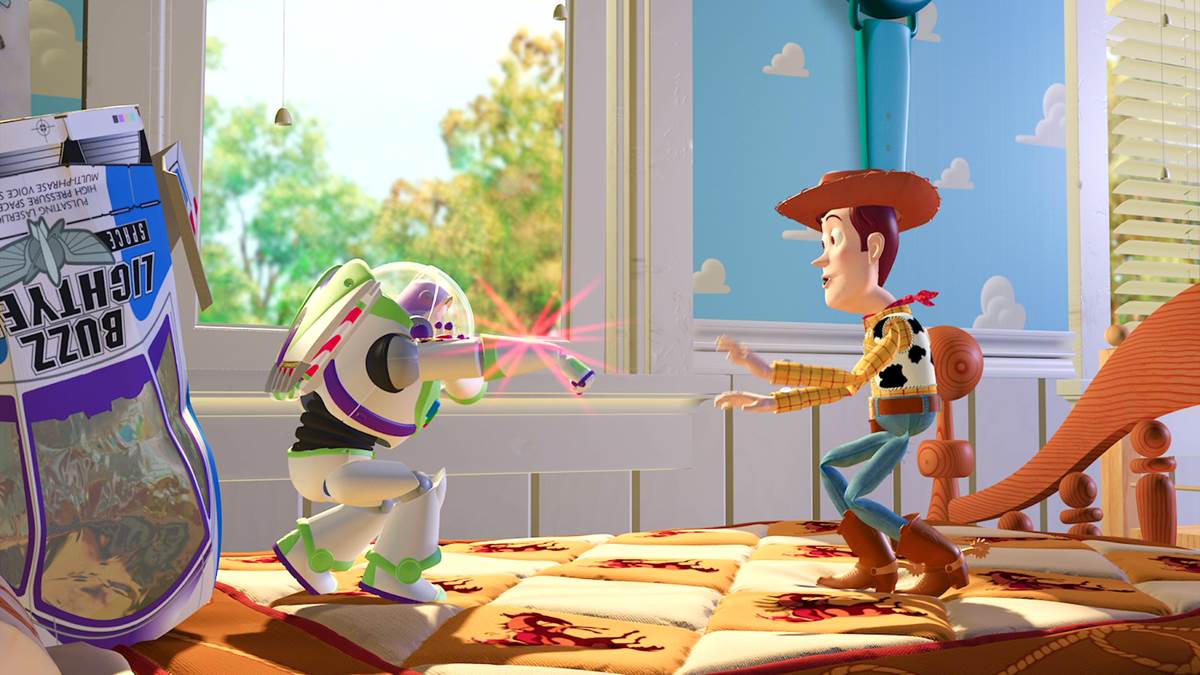 Speaking of Sox, the voice of the robot companion might sound a little familiar, as it belongs to Pixar story artist and the director of The Good Dinosaur, Peter Sohn. Pixar fans will immediately recognize him as the voice of Emile in Ratatouille and Squishy in Monsters University among others.

In terms of the rest of the cast, you can expect to hear Chris Evans as the titular Buzz Lightyear, as well as Taika Waititi, Keke Palmer, and Dale Soules rounding out the cast.

He says it throughout the franchise as well as, you know, the title of the animated television series, but Buzz Lightyear is a Space Ranger from Star Command. In the trailer, we get to see a bit more about this agency, and it is referenced on his basic t-shirt (merchandise of this too please!) and his dog tags. The dog tags are emblazoned with the familiar Star Command logo we saw on his toy form as well as in the parks and T.V. show, but interesting to note is that they also reveal Lightyear’s blood type. O Positive. Whether or not this is a thinly veiled easter egg to A Bug’s Life or a story point, or even just a good pun (universal donor) remains to be seen.

“It’s just like you said lizard man, in the shadows to the left.”

While he is mentioned a few times in the original Toy Story, the evil Emperor Zurg doesn’t make an appearance until Toy Story 2, when Rex is playing a Buzz Lightyear themed video game. It serves as the opening of the film, introducing the villainous character, as Rex navigates his digital Buzz through a planet full of Zurg-Bots before encountering the Emperor himself in a boss level he doesn’t quite beat thanks to his inability to handle the controller. 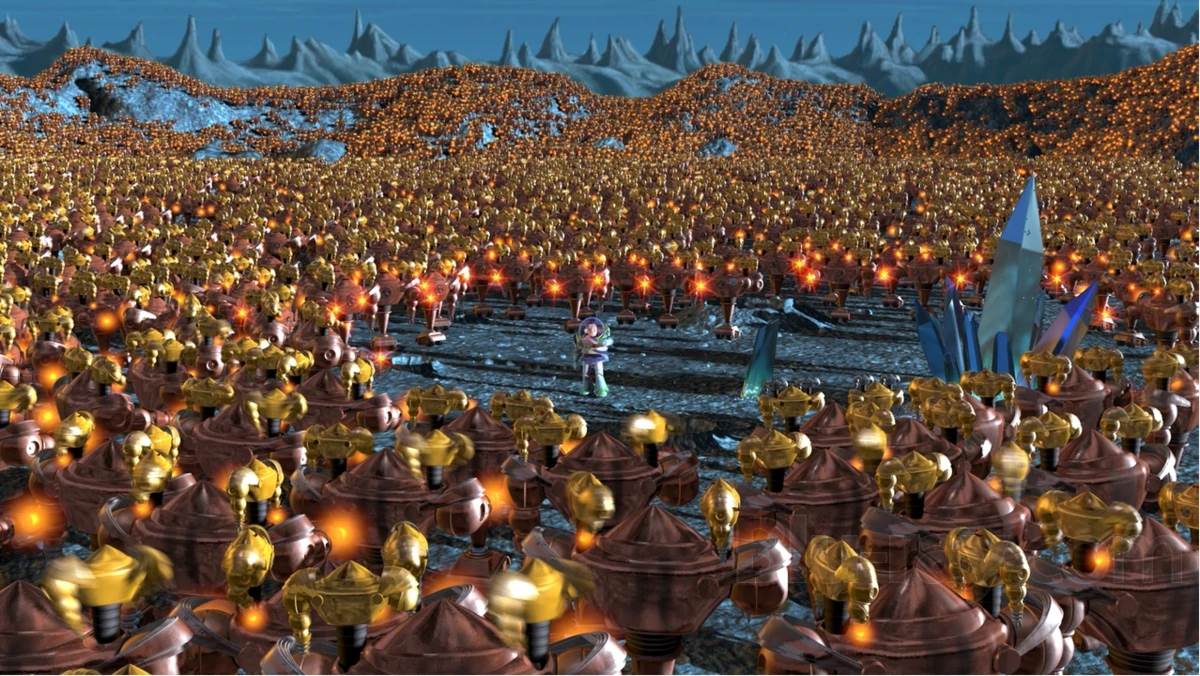 It isn’t until later in the film we actually come face to face with the Evil Emperor Zurg (in Toy Form) in the shadows to the left (just like in the video game!) in an elevator shaft where a duel between Buzz Lightyear and Zurg takes place before the very revealing moment (spoiler alert!) where Zurg proclaims he is Buzz’s father in a parody of The Empire Strikes Back. 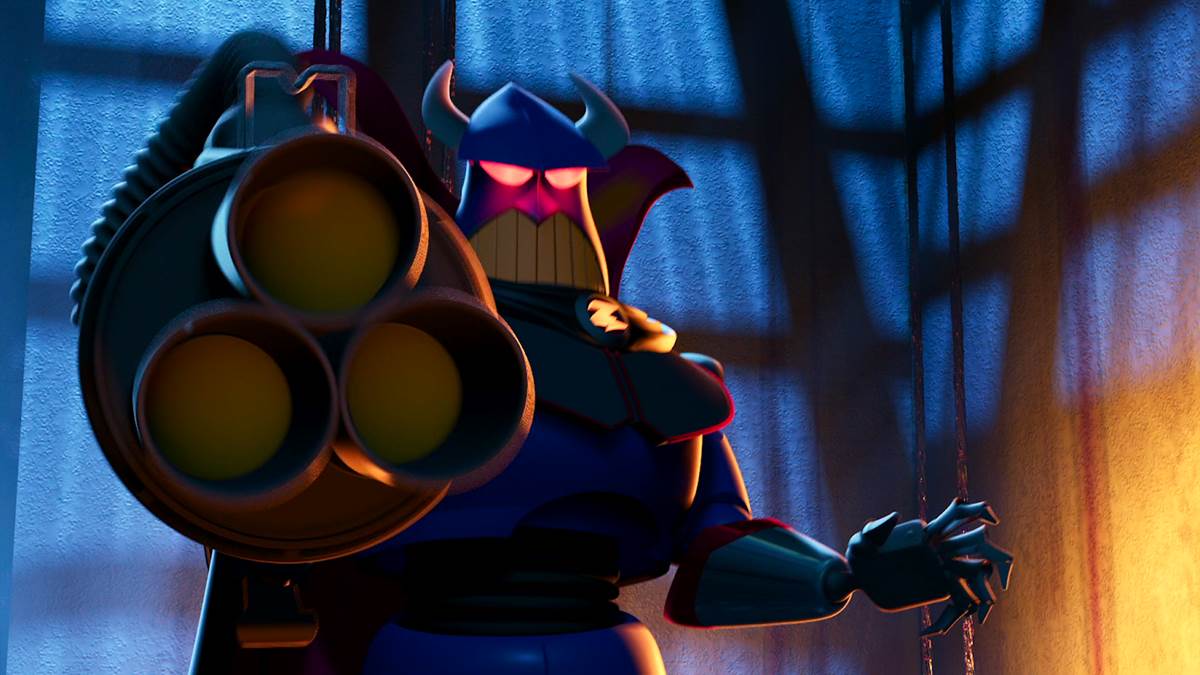 Though the villains aren’t quite outright named in Lightyear, there are some characters that appear in the trailer in an antagonistic fashion and they sure do look like the Zurg bots. We see menacing robots with “Z.A.P.” on their chest plates storming down hallways, and we even get glimpses of this “giant robot” that is chasing Lightyear and he looks and is armed a lot like the Emperor Zurg we knew in toy form.

Of course, all of this is speculation thanks to some quickly edited shots backed by the music of David Bowie, and we won’t know for sure until Lightyear is released on June 17th, 2022.