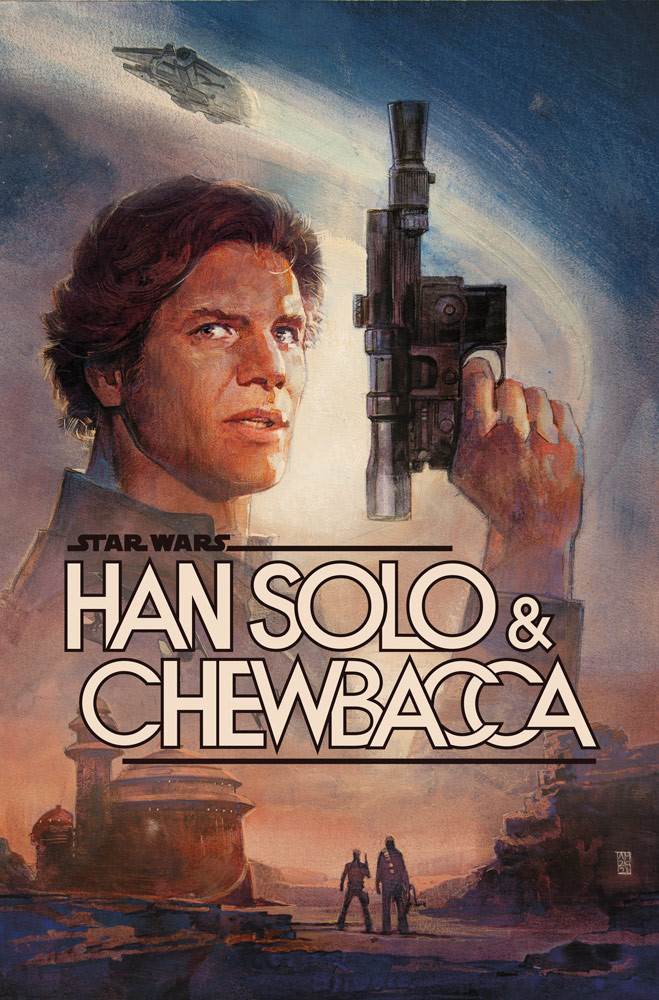 The first issue of Marvel’s new comic-book series Star Wars: Han Solo & Chewbacca opens with a one-panel flash-forward to Han frozen in carbonite– a quick reminder that while the bulk of the current ongoing Star Wars comic titles are set between the events of The Empire Strikes Back and Return of the Jedi, this series is rewinding time a bit to the period before Episode IV – A New Hope, when the title characters were smugglers and thieves working for crimelord Jabba the Hutt.

As Han Solo & Chewbacca begins, in fact, our antiheroes are in the midst of one of those jobs– preparing to pick up a crew escaping from the Casino Planet of Galator III with the Millennium Falcon. That crew isn’t too thrilled that Han and Chewie showed up late, however, and they take that grievance to Jabba, who luckily sides with the infamous Corellian and his trusty Wookiee pal, even going so far as to offer them their next illicit gig. 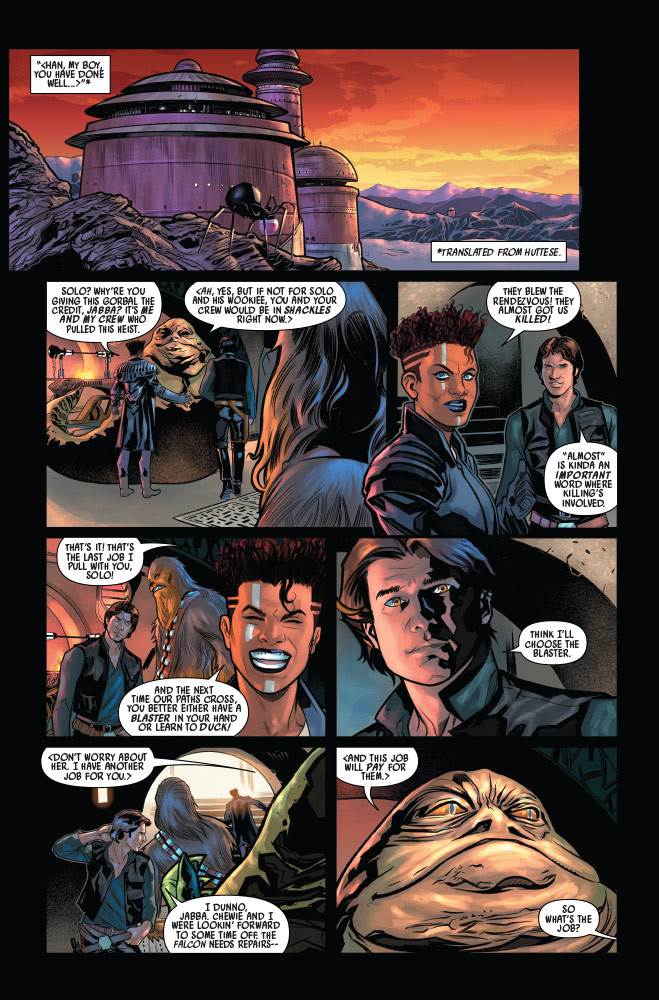 There are a couple catches for our favorite smugglers on this next mission, however: for one, they have to team up with their Rodian frenemy Greedo (we get a nice “I shoot first” reference pretty early on in this interaction) and, perhaps even worse for Han, it means a return to the industrial home planet he swore he’d never revisit– Corellia. The rest of this kickoff issue is pretty standard heist stuff, with Han, Chewie, and Greedo scouting their target, swindling marks, and so on… until the ostensibly shocking twist that will in all likelihood turn out to be a misdirect. Along the way we’re also introduced to a deadly new bounty hunter named Marshal Buck Vancto, who’s hot on Han and Chewie’s trail after the recent casino job. It seems like Vancto is going to prove a worthy adversary to the protagonists, but first they have to get along with Greedo and their mysterious new Corellian contact long enough to pull off this particular caper. 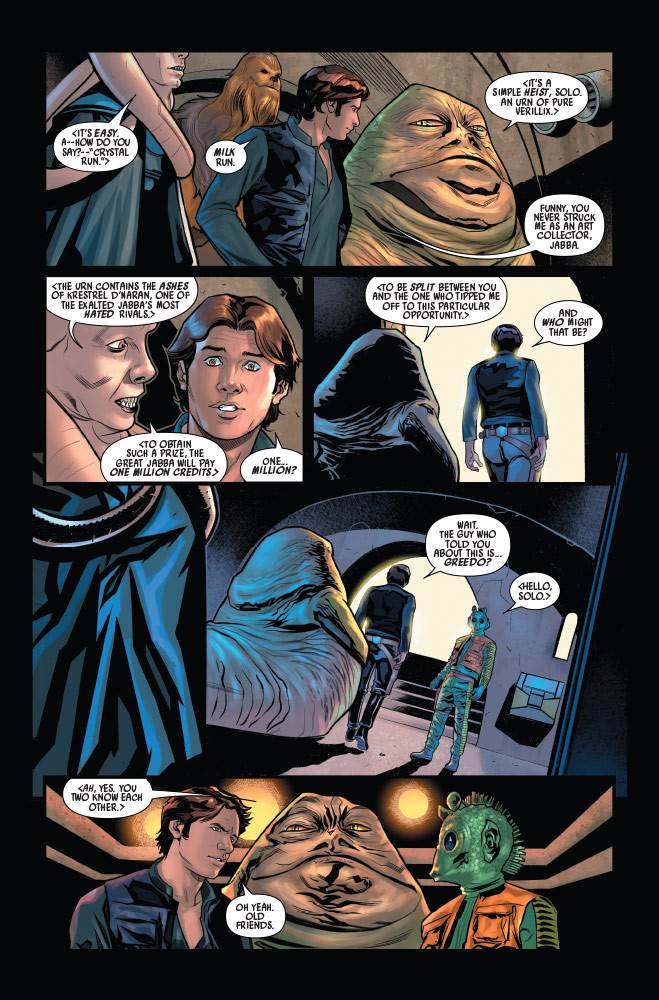 I really enjoyed reading the first chapter in this arc, entitled “The Crystal Run,” which is deftly written by screenwriter Marc Guggenheim (best known as creator of the popular television series Eli Stone, Arrow, and Legends of Tomorrow) and attractively illustrated by talented Italian artist David Messina (Star Trek: Countdown). Guggenheim throws in references from all across the Star Wars timeline, including character name-drops from Han’s past as seen in Solo: A Star Wars Story and in-universe idioms introduced in The Mandalorian. Despite being a supersized comic, length-wise, the story moves along at an entertainingly brisk pace, planet-hopping from one location to another in the traditional Star Wars manner. The characters all feel like they’re speaking in their authentic voices, and the general atmosphere of the narrative just feels appropriate for this pre-Alderaan explosion era. Speaking of which, with so much of the Star Wars media real estate being focused on the New Republic period (in The Mandalorian and The Book of Boba Fett) and the time between Episodes V and VI (in the comics) recently, it’s nice that we’re diving back into the Imperial era once again with Han Solo & Chewbacca, The Bad Batch, and the upcoming Obi-Wan Kenobi content. So until Han, Chewie, and Greedo become Best Friends Forever, make mine Marvel! 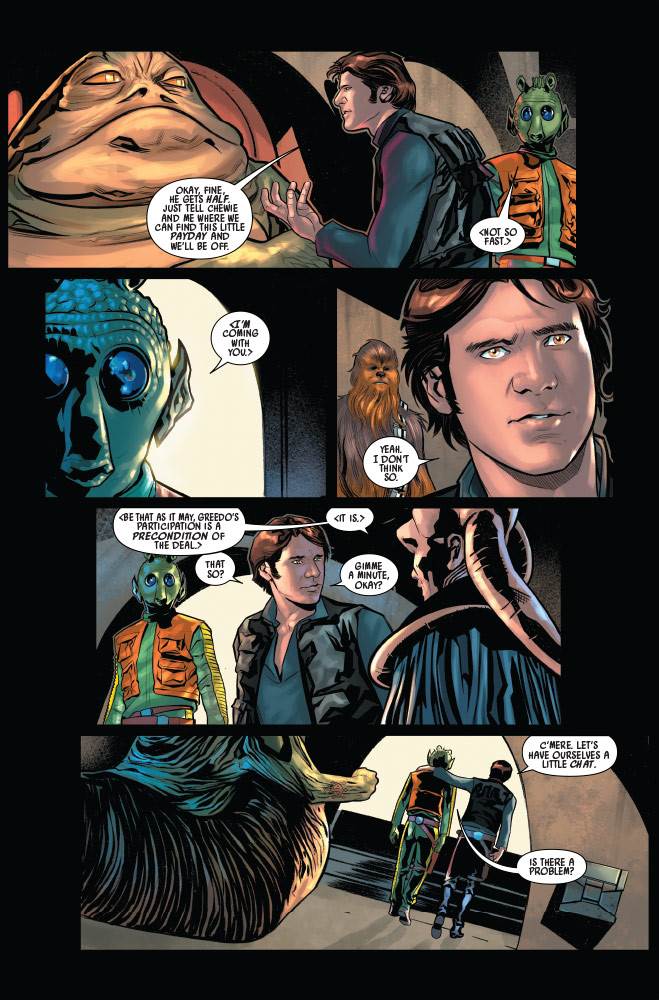