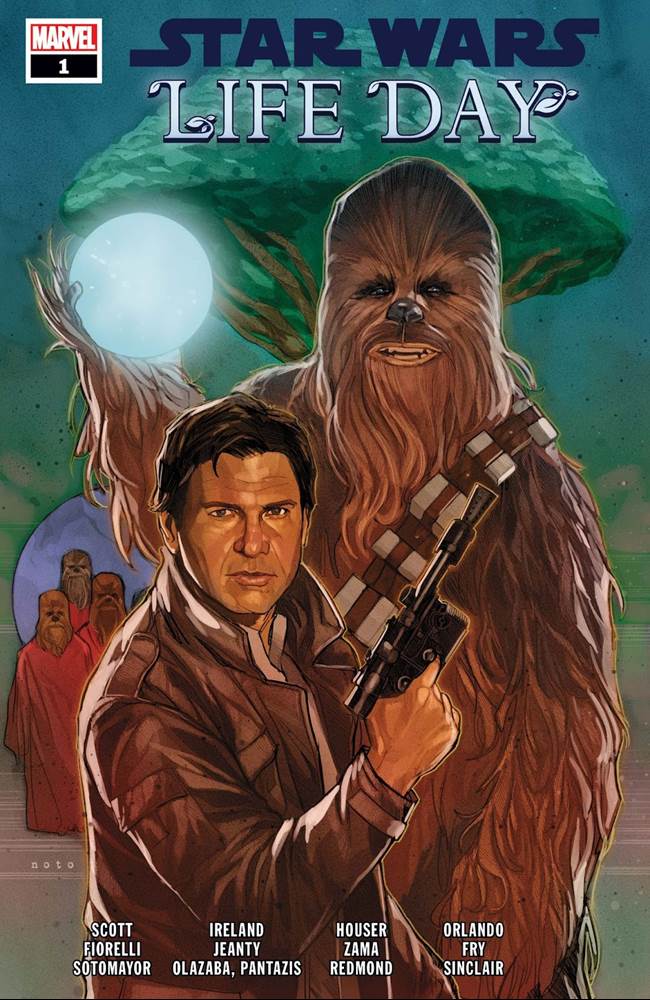 The fictional Star Wars holiday of “Life Day” may have taken place a couple weeks ago (specifically on November 17, the anniversary of the airing of the notorious 1978 Star Wars Holiday Special), but due to supply chain issues the release of the Marvel Comics one-shot comic book title Star Wars: Life Day was delayed by a full week. And here I am reviewing the comic another week after that because the pesky real-world Earthly holiday of Thanksgiving got in the way.

Star Wars: Life Day is an anthology short-story collection of sorts, not too dissimilar from this year’s Star Wars: Life Day Treasury written by Cavan Scott and George Mann, but this time in comic book form. The incredibly prolific Scott returns as the writer of this issue’s wraparound narrative, which sees Han Solo and Chewbacca return to Black Spire Outpost on Batuu during the New Republic period between Return of the Jedi and The Force Awakens. 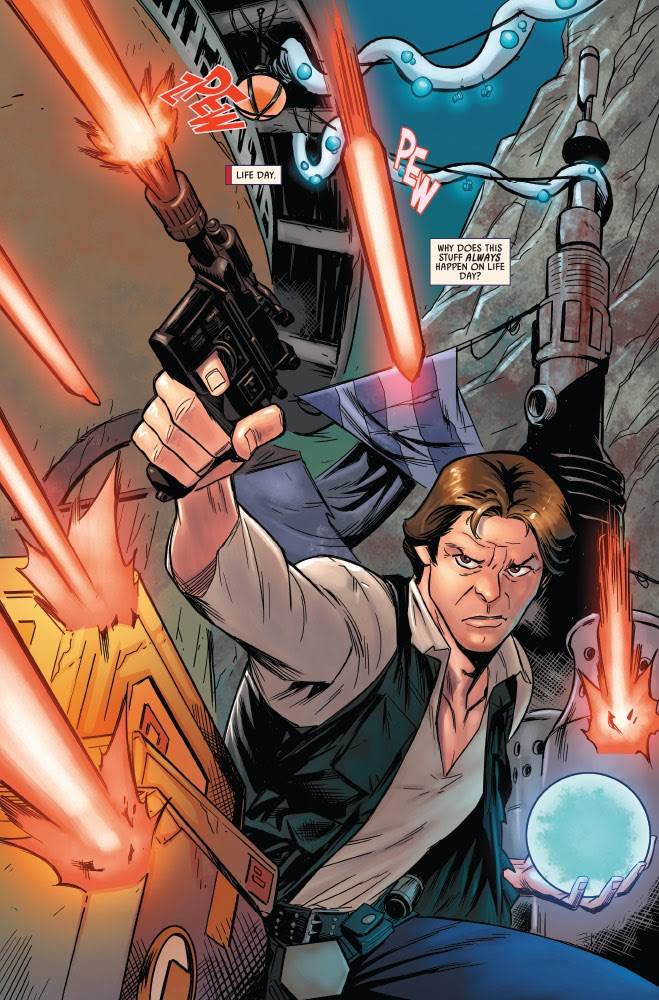 I was surprised to learn how early on in the Star Wars timeline Solo lost control of the Millennium Falcon, as we see him piloting the heavy freighter Ervana to Batuu. He and Chewie are in Black Spire to conduct some underworld-type business (it seems odd to me that Han would be involved in this kind of stuff while still married to Leia) on what happens to be Life Day, and when Solo seeks out a souvenir to purchase for his Wookiee pal it reminds him of a few tales from past experiences with the holiday. We first flash back to the High Republic era, during which Padawan Burryaga Agaburry and his human Jedi Master Nib Assek travel to the Wookiee homeworld of Kashyyyk to investigate rumors that the sentient dark-side plant monsters known as the Drengir have invaded the planet. Then we see a younger Han Solo’s trip to Lessa-7, where he and Chewbacca uncover a ring of Trandoshan slavers and free their Wookiee prisoners. Lastly, the duo enlist the help of the fussy protocol droid C-3PO for a secret mission on the planet Kudo. All of these events take place on and tie in with Life Day in some way, helping to refresh Solo’s memory during a crisis in the “present” regarding what the holiday is really all about. For Star Wars: Life Day, Cavan Scott has partnered with fellow writers Justina Ireland (Star Wars: Spark of the Resistance), Steve Orlando (DC Comics’ Batman and Robin Eternal) and Jody Houser (Star Wars: Age of Republic) to deliver this issue’s stories and dialogue, while artists Ivan Fiorelli (The Amazing Spider-Man), Georges Jeanty (Star Wars: The High Republic), Paul Fry (DC’s Crimes of Passion), and Kei Zama (Star Wars: War of the Bounty Hunters – 4-LOM & Zuckuss) have illustrated each tale with a variety of styles, each suiting the light-hearted spirit of the Life Day concept. This is a fun though largely inconsequential book that features some great characters (it’s cool to see Oga Garra of Star Wars: Galaxy’s Edge fame portrayed visually for the first time in a comic story) and a warm, friendly tone that would be suitable for families or young children tempted to pick up a sequential-art companion to Life Day Treasury. It’s also really nice that the Life Day holiday– once dismissed as another laughable element of the Holiday Special– has now been so thoroughly reintroduced into the Star Wars canon that it gets its own books, comics, and merchandise. Now, someone just needs to convince Disney Parks to decorate Black Spire Outpost for Life Day in the same way we’ve seen depicted in these stories. 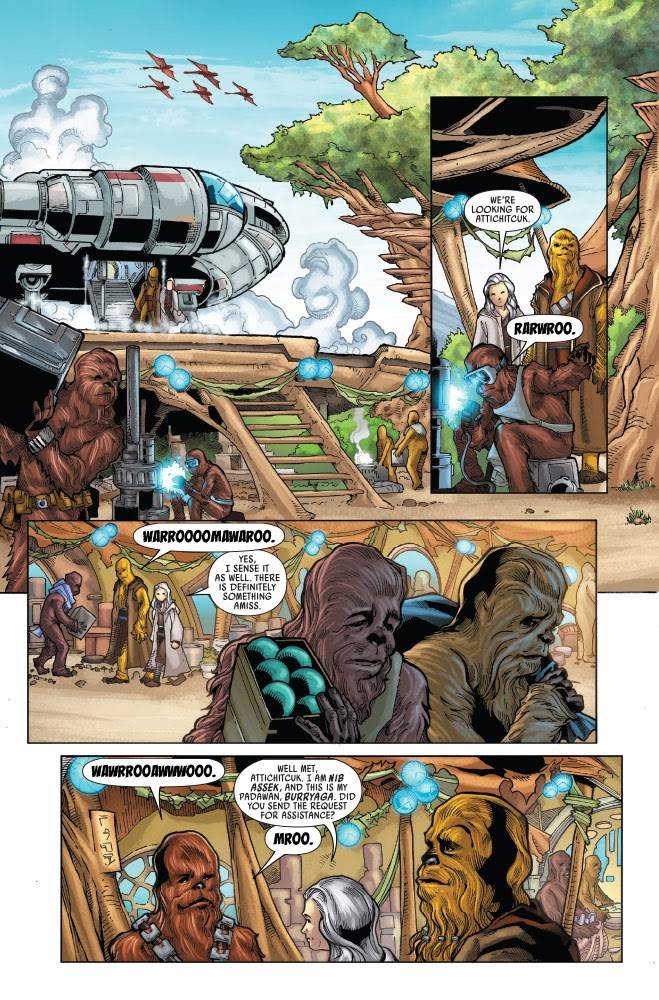