It’s an annual tradition for Luz, but what is the tradition? This week’s The Owl House answers that and spends more time with the Blight brother as we learn more about the upcoming Day of Unity. 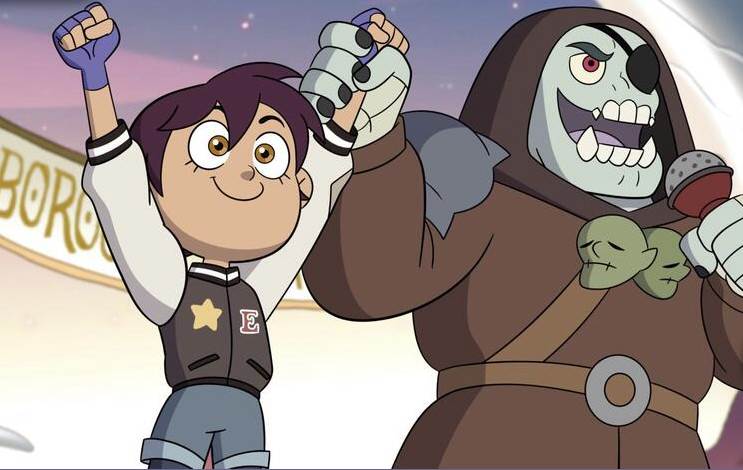 The cold open for this episode starts with the annoying sound of a phone alarm, but also shows us how Luz gets her phone to charge so I guess that’s cool too or something I’ve never noticed before. The alarm is actually a reminder that Luz chooses to ignore, something with her mother in the human realm. But what?

For the first time in a few episodes, we are treated to the full opening credits for The Owl House.

Luz has a mile long to-do list and Eda knows something is up. Plus, Luz has stolen Eda’s Penstagram and is messaging Hunter (thanks to getting his contact info and username “RULERZREACHF4N” from Willow) and asking if Belos is evil. Devotees may recall that “Rulers Reach” was the name of the book that King (and Luz) wrote earlier in the series. Is this a fan service call back or a crucial plot point? Interestingly, Hunter replies simply “Leave.Me Alone” but a follow up image of his secret palisman that was accidentally sent to the wrong person. Who was he trying to send that to?

Luz explains that today marks the day that her and her mom partake in some kind of tradition and King suggests some kind of healthy distraction to take her mind off things. Fortunately, Amity shows up and has the perfect distraction. Turns out her dad wants her to go to the Emperor’s Coven tryouts for the Abomination Coven and has built a chaperone abomination to make sure she attends. However, Amity would much rather go to the Bonesborough Brawl with her dad since he won the brawl like he did once upon a time, and doesn’t even want to join a coven anymore. She also sees this as a way of getting closer to her father, seeing as if she won that could be something that they share together.

Eda hears talk of the brawl and is ready to join, she used to love going to them and even shares with Amity that her father was great to watch in the duels.

Edric and Emira are also on scene, proud of the rebellious nature of their sister and ready to lend a helping hand to ensure Amity partakes in the brawl. To help her disguise herself, the twins offer their concealment stones to create a fantastic disguise. Eda spots the guard from the very first episode of the series, the one who asked her out and stole King’s crown to do so, and figures they can ask him (now the reigning champ of the brawl) what Belos is up to and why Raine Whispers has been acting weird.

He doesn’t divulge anything, but worry not, Eda has a plan to create a blabber serum that will get him to spill everything he knows.

The first brawl begins and Amity is involved and doing well…. But Luz finds herself watching, and thinking, when her phone starts going off again. She needs to be more heavily involved in this distraction so she enters the brawl herself. If Luz fights too, she can help Amity get to the belt faster.

Emira will serve as the healer, but Edric doesn't seem to be able to get anything right and wanders off. He discovers a trap set by Eda and helps her strengthen it with some of his knowledge. Now, he’s recruited by the Owl Lady to help with the creation of the serum.

Luz is in the fight now and a montage begins, showcasing both the brawl and the creation of Eda’s serum. We know both points are going to come to head here at some point, and sure enough they do.

Between rounds, Luz’s phone goes off again, prompting her to take a walk and discovers the chaperone abomination that was sent on a fool’s errand to allow time for Amity to participate in the brawl. Trying to destroy it, Luz inadvertently sets off an alarm and lies to Amity about it, leaving her in the dark about most of the encounter. Now it’s Amity’s turn to head into battle against the Warden when Amity’s dad shows up (because of the alarms) and declares that his child is forfeiting the match. Caught in her lie, Luz tries to explain that she didn’t want to worry her, but clearly something is wrong with Luz and is worried. The Warden still wants a match though, and Amity’s dad restrains him using an abomination spell, thus crowning him the champion…again. Though he doesn’t accept the title belt since he already has one. Finally Amity stands up to her dad and says she isn’t going to the coven tryouts and runs away.

With the serum, it’s not done just yet, and Edric knows a way to get it to burn hotter and now is the perfect opportunity since the warden has been restrained by his dad. With Fire bee honey, it is now burning hotter than expected.

Amity explains to Luz that she was upset because she wanted to be closer to her dad and the brawl could have done that. Also, she has been worried because Luz has been acting strange all day, and asks if it has something to do with the human realm. Luz comes clean and explains that today is the anniversary of the day her dad died, and normally her mother and her would normally pick flowers and visit his grave and spend the day together, and this year she isn’t with her mother and doesn’t have any flowers. So when Amity came with the problem about her dad, she may have been jealous, she may have just needed a distraction, but the heartfelt moment is broken when they hear screaming in the distance.

The new recipe of the serum has turned the Warden into a crazy beast that is rampaging through the brawl. Mr. Blight is trying to fight the creature with an abomaton and Amity tries to help, only to get shunned and put away in a corner with her siblings. Eda, in Harpy Eda form, is fighting as well, and Edric suggests something cold to reverse the heat of the serum they made. Luz says she can help too, and Eda gives her a lift into the sky. Amity once again joins her father, this time restraining one of his arms so he can’t make a spell to stop her, saying that she is making her own choices from now on. Luz scatters glyphs everywhere and creates a snowbank on top of the Warden to cool him off. After a brief and comedic moment with Alador, Eda approaches the warden and wants to know about Raine and the Day of Unity. While he doesn’t know anything about Raine, he shares what he has heard about the day of unity: the day of unity is supposed to unite everyone with the titan, but some don’t think the new world won’t be very inviting to magickind, wild or not.

Edric comes out to apologize for messing everything up, but Eda instead congratulates him on his ability to make a horrifying transformation serum, saying that with his skillset he has the potential to be a great wild witch and gives him a Bad Girl Coven T-Shirt, which Emira also desperately wants.

Amity comes clean and says she no longer wants to be in the Emperor’s Coven, that it was always what mom wanted. She then goes down a list of things that mom wanted, and Alador realizes that he actually doesn't seem to know much about his daughter, but does point out that he does like her new hair color, it's an abomination-color after all. Amity joins Luz and together they try to create flowers to pick and are eventually successful. Amity creates a balloon and they attach the flowers giving fans hope that maybe they’ll reach the human realm, but the episode closes on a view of Luz’s mom at home with the basilisk putting flowers in a vase and looking to the same(?) stars above.

This episode of The Owl House is now available on The Disney Channel and the DisneyNOW app. You can catch up with previous episodes and seasons on Disney+.