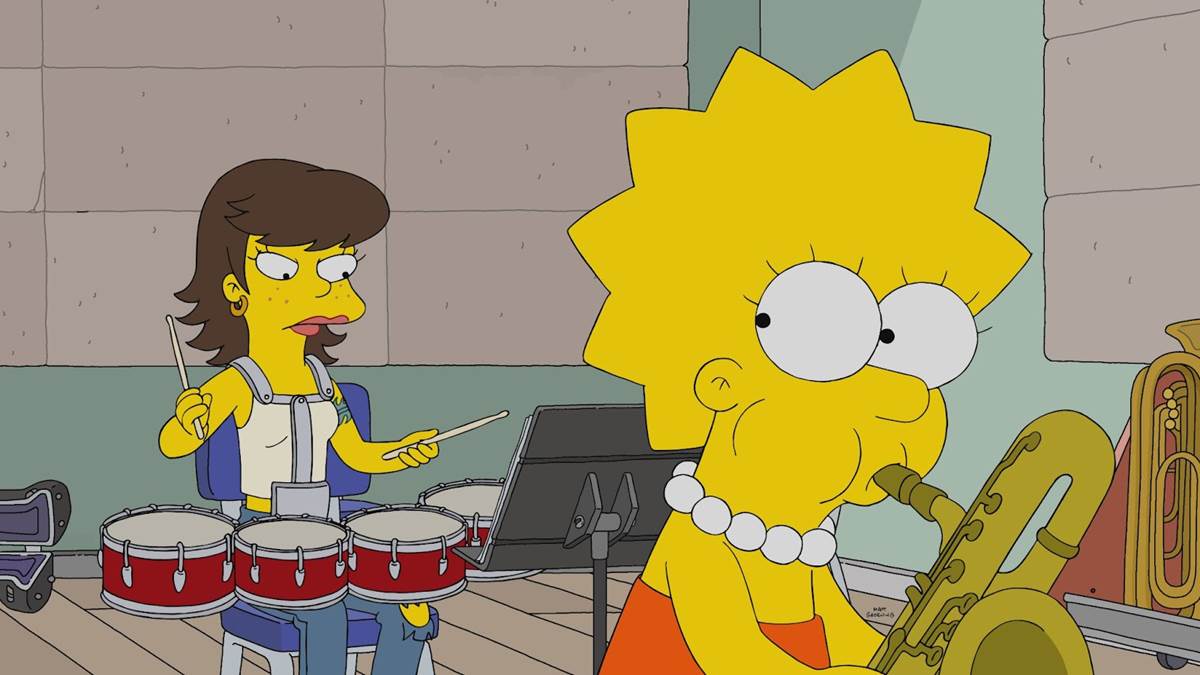 Hello and welcome to Laughing Place’s regular recap of new episodes of The Simpsons on FOX. This week’s installment, entitled “Girls Just Shauna Have Fun” (a reference to the 1983 Cyndi Lauper hit “Girls Just Want to Have Fun”) is the 19th episode of the long-running animated sitcom’s 33rd season. “Girls Just Shauna Have Fun” begins with the Springfield Elementary School band practicing “Mary Had a Little Lamb” with Mr. Largo, who is frustrated by the band’s lack of polish. Principal Skinner enters with a letter from the local high school, which has requested Lisa Simpson to replace an injured saxophone player. The next day, Marge drops Lisa off at the high school and the eight-year-old girl takes a seat with the teenagers. The band leader there has the students play the “Theme from Hawaii Five-O” until interrupted by Superintendent Chalmers’ daughter Shauna (recurring guest star Tress MacNeille), who enters the class late. “I’m going to call you James Corden, because you’re a late late show,” jokes the teacher, and the students appreciate the reference. Lisa reintroduces herself to Shauna, but has to remind her that she babysat for the Simpson children the previous Saturday night.

At the Simpson home, Bart grumbles that Lisa gets to go to high school, and Lisa remembers that she left all her sheet music at the high school, so she rushes back to get it. At the school, she discovers Shauna practicing her drums by herself late at night, and attempts to bond with the older girl over their shared passion for music. Shauna initially puts up a defensive wall but then invites Lisa over to her house to jam. When Lisa shows up at the Chalmers house, she’s greeted by the superintendent and then Shauna quickly ushers her up to her room. Homer comes by to pick up Lisa and finds Chalmers working on his own personal brewery in the garage. Homer takes a sip of the beer and his mind is transported to a Renaissance painting. Chalmers offers to teach Homer how to brew beer, while Shauna gives Lisa a tour of the Springfield Mall. Lisa and Shauna go see a teen romance movie called A Prom Before Dying, and to get in Shauna claims to be Lisa’s big sister, which makes the younger girl giddy. The next day, Lisa and Shauna meet up for another practice at the high school, and then at home Lisa marches around calling Shauna her “new super-awesome sister,” which upsets Maggie. “I’m not sure Shauna’s the best influence. She always seems like she’s so over it, even when ‘it’ is something nice,” says Marge, but Homer dismisses her and heads back to Chalmers’s garage for another brewing session, which is preceded by a monk-like ritual, then Chalmers tells Homer he’s ready to brew his own batch. At home, Marge’s attempt to read a horror/romance novel is interrupted by Lisa and Shauna parading around the house playing music. “Messing with parents is the best,” says Shauna.

Lisa tells Shauna she should try out for lead drummer, but Shauna isn’t hearing it because she refuses to admit she cares. Lisa talks Shauna into it– “Fine, I’ll do the audition… but only to shut you up.” Lisa celebrates with a sax solo, and later at the audition Shauna wows the teachers and all the other students with her drumming skills. There’s a smash cut to a football game where Lisa and Shauna play in the high school marching band, and afterward Shauna gets asked out by the team’s star quarterback (guest star Chris Redd of Saturday Night Live fame). Lisa gets invited along to a pool party where everyone has to bring a beer to get in, and Shauna says she has a hookup for some brews. At her home, Shauna sweet-talks her father and Homer, distracting them with a demonstration of her musical abilities so she can steal some of their beer. But when the teens come by to scoop up the beers, they sneak into the garage and take all of them instead of just one case. 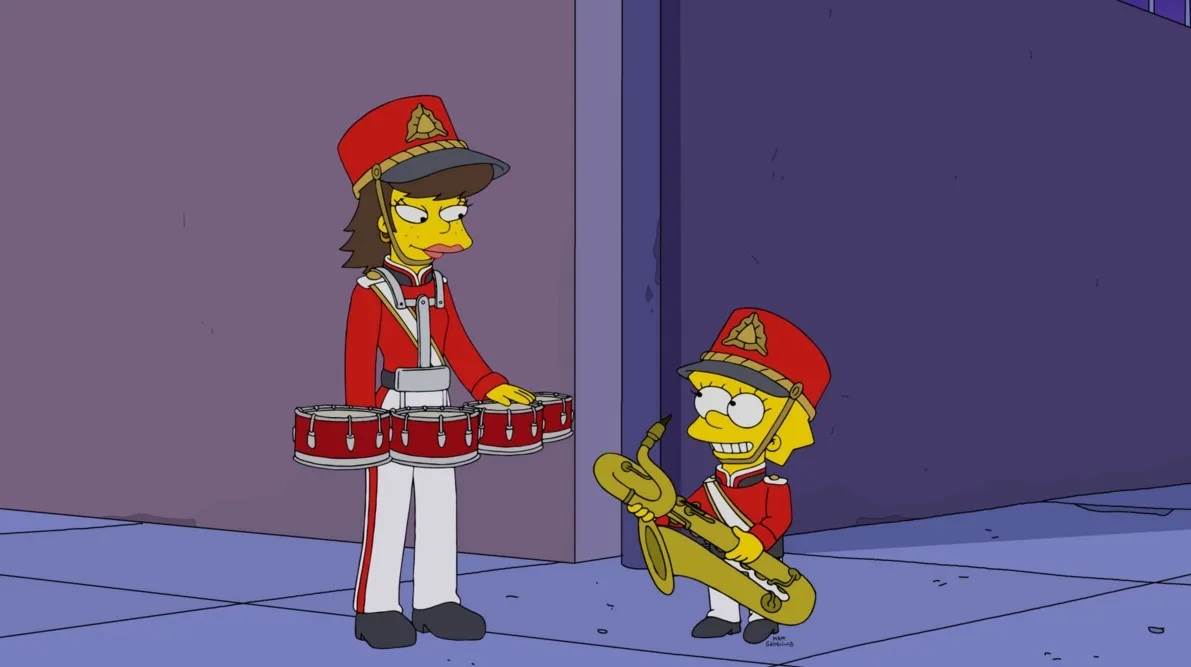 Lisa and Shauna show up to the pool party, where the other teens ask Lisa to play a song on her saxophone. Shauna and her new football-player boyfriend leave to make out, and when the parents leave for the day things start to get crazy and Lisa becomes wary: “This is like one of those TV shows I’m not supposed to watch.” Homer and Chalmers discover that all their beer is gone, and Chalmers checks his daughter’s social media feed to find out where she disappeared to. Kids at the party start using Lisa’s sax as a beer bong, so Lisa calls 911 and reports the abandonment of a minor. Shauna calls Lisa a “party narc” and Lisa recovers her sax just before Homer and Chalmers show up and start grabbing back all the beer bottles with their faces on them. “I am not a stupid snitchy baby!” cries Lisa as she runs away from Shauna, who she feels betrayed by.

Chief Wiggum and Lou arrest Chalmers and Homer, but when Lou breathalyzes the teens, Chalmers realizes that their beer is all alcohol-free because Homer forgot to add the yeast: “Your incompetence just saved our cowls!” Wiggum announces to the partygoers that they’re not drunk, and tells them to use this experience to discover a new sense of self-awareness. Homer finds Lisa and comforts her, then a week later Marge asks her if she’s still upset about Shauna. “I really did think of her like a sister,” says Lisa. “Well, you still have your real sister,” replies Marge, gesturing to Maggie. Lisa smiles and hugs Maggie just before Marge and Homer head out to spend a night together while Homer is still dressed in his monk costume. Shauna arrives to serve as the babysitter once again, and Lisa says the high school made her quit the marching band, while Shauna started her own punk band called “Brenda and the B-Words.”

Shauna brings out her drums and offers to jam with Lisa again, which causes Bart to cover his ears while Maggie and the pets run for cover. In the coda, the “Hawaii- Five-O” theme plays again, but now with lyrics over a still image recap of the episode’s events. 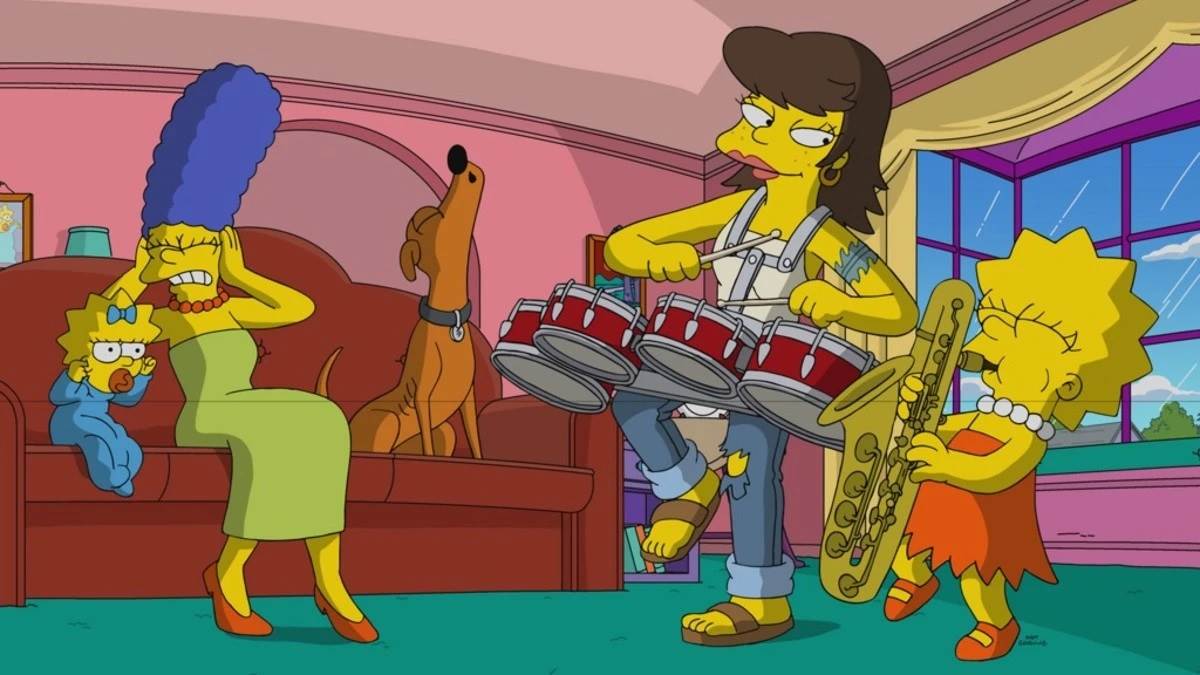