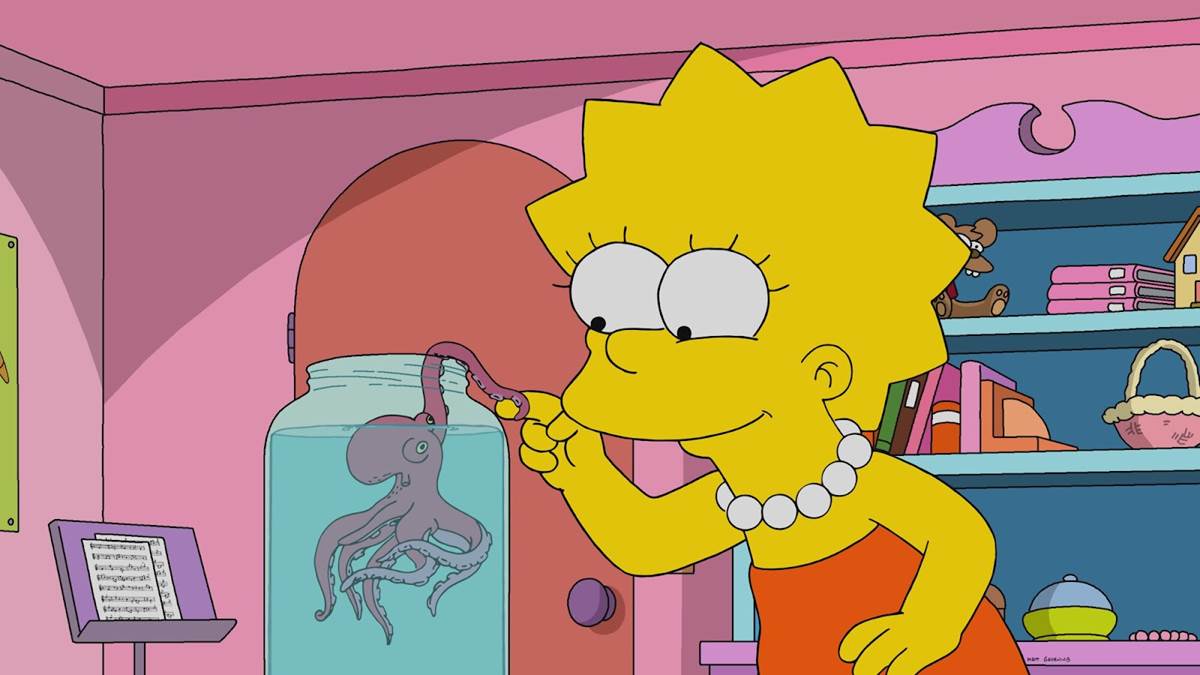 Hello and welcome to Laughing Place’s regular recap of new episodes of The Simpsons on FOX. This week’s installment, entitled “My Octopus and a Teacher” (a play on the title of the award-winning 2020 documentary My Octopus Teacher) is the 18th episode of the long-running animated sitcom’s 33rd season. 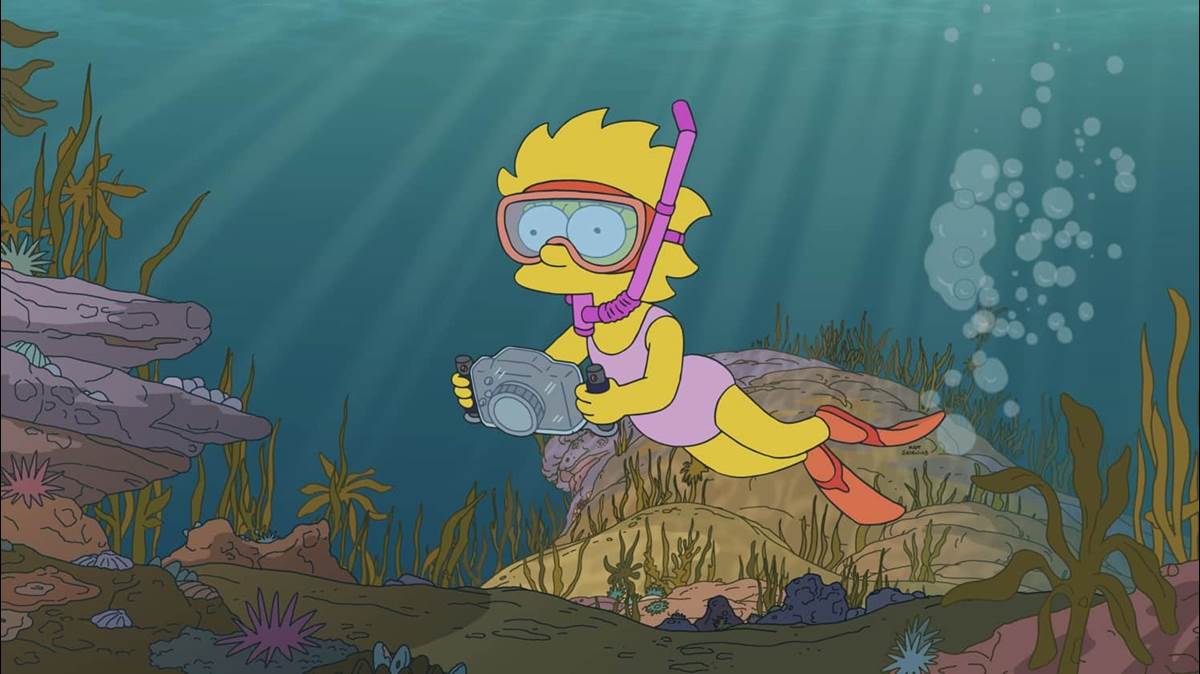 “My Octopus and a Teacher” begins with a title card for the in-universe documentary My Cephalopod Soulmate, which is narrated by Lisa Simpson, who says she was searching for meaning and found it in the “Future Nature Documentarian” day camp. In a flashback, we see Lisa befriending an octopus while snorkeling in the ocean. Marge interrupts Lisa while she’s recording her voice-over, alarmed by a shark about to eat the octopus. In the documentary, Lisa and the octopus (named “Molly” continue to befriend each other, while at Springfield Elementary School Principal Skinner and Superintendent Chalmers interview an overqualified new teacher (voiced by guest star Kerry Washington of Scandal fame). The two men are overjoyed and immediately hire her with a $93.00 signing bonus– exactly what Chalmers had in his pocket. In the hallway, Bart freaks out when he recognizes the new teacher from somewhere, but freaks out and runs off before she can place him.

Lisa’s documentary plays at the Aztec Theater, and the film gets a standing ovation and first prize after the “octomapus” (according to Homer) suffers an untimely death in the jaws of a shark. At home, Lisa says she needs some time alone, then retreats to her room where the octopus has secretly been living in a jar. At the school, Mrs. Peyton introduces herself to the other teachers– “Who here is familiar with project-based learning?” Of course, no one raises their hands, and Miss Hoover is even too distracted by her phone to even acknowledge her new coworker’s presence. But Hoover snaps to attention when Peyton reveals that she has lesson plans already planned out for the entire semester. In the classroom, Peyton has her students draw self-portraits so she can learn more about them, and Bart simply glues a piece of paper to his face so she won’t recognize him.

Milhouse and Nelson have a talk with Bart and tell him they’re concerned about him, and he yells at them in response: “I don’t know why I do stuff, okay? I don’t know why I’m yelling right now!” At home, Molly slips through the faucet and ends up in Homer’s cereal, causing his milk to turn black with ink. Bart actually finds himself enjoying Mrs. Peyton’s homework assignment, but the next day he destroys his own project when he sees that Milhouse had used the same technique he did. Molly escapes from Lisa’s jar again, and Lisa hunts around the house for her in a musical montage. Marge and Homer have a meeting with Mrs. Peyton, who tells them she’s not sure what’s wrong with Bart and that she’s tried everything to get to him, including “negging, no recess, and nothing but recess.” Back at home, Homer tells Bart he thinks he must have a crush on his teacher, but Bart denies it, explaining that he met her before.

Bart opens up to his father and further explains that while Lisa was making her documentary at the beach, he sneaked into a private pool and started drowning until he was saved by Mrs. Peyton. After being rescued, Bart yelled at her and ran away because he was embarrassed. Homer suggests telling his teacher the truth, and Bart actually thinks it might be a good idea. Molly hides in Santa’s Little Helper’s water bowl, where Lisa discovers her and puts her back in the jar so she can take her to school with her. At Springfield Elementary, Bart sees Mrs. Peyton kissing her husband and throws a fit, tearing a water fountain out of the wall. Seeing the wreckage he caused, he admits he may have a crush on his teacher. Later, the kids all present their projects to an audience of parents in the gym, and Bart tells Homer about his realization. 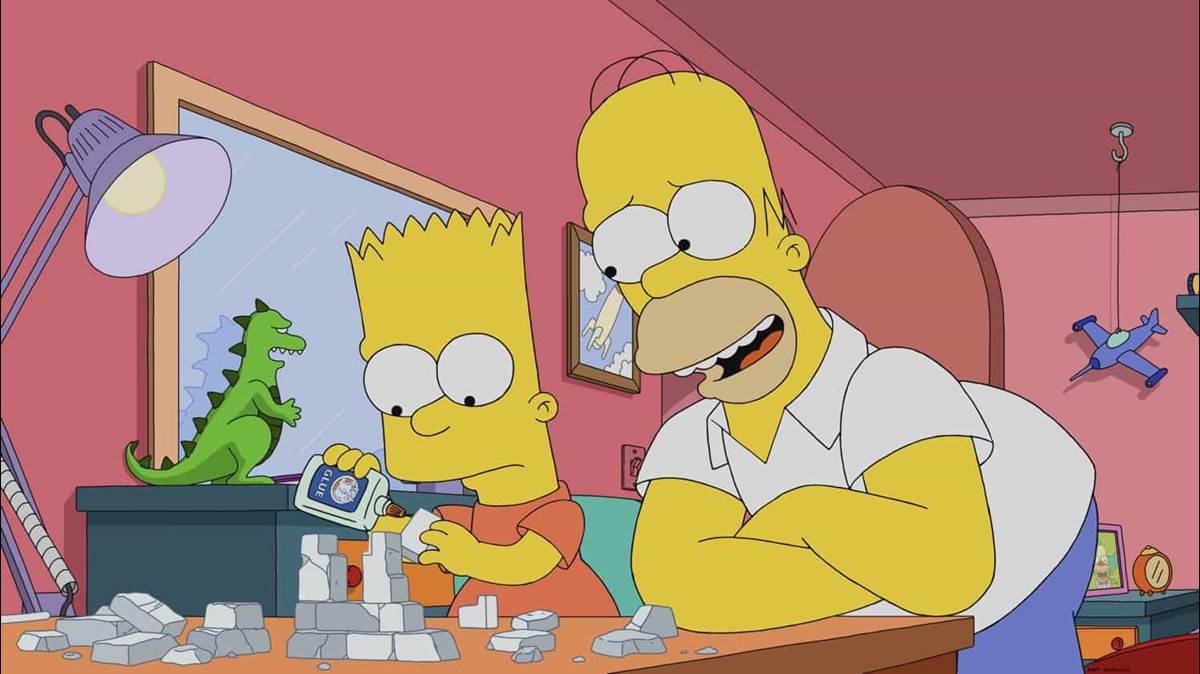 Homer gives Bart his advice on crushes: “You’re a kid, she’s a grownup. Get over it.” But his follow-up advice is surprisingly more insightful, and Lisa overhears it causing her to decide to put Molly back in the ocean. Bart sees Mrs. Peyton kiss her husband again, and struggles to not get upset. When she thanks her husband for playing oboe during the presentation, Bart stumbles away and ends up getting Molly attached to his face. He backs into the controls of the bleachers and havoc breaks out, causing destruction that ruins the event. But Peyton tells Bart she knows he wants to be good, and in return Bart reveals that he was the boy that she had saved from drowning that day at the beach– and also that he has a crush on her. “A crush on your teacher just means you’re coming to love something new about yourself,” says Peyton. Peyton says she’s going to stay on as Bart’s teacher, and Bart even accidentally suggests a strategy of Mrs. Krabappel’s that used to work. In the final shot, Bart scrawls the sentence “I will not express my feelings through chaos” over and over again on the chalkboard.

In the coda, Lisa releases Molly back into the ocean, and the octopus responds by placing a tentacle on Lisa’s foot before swimming away.