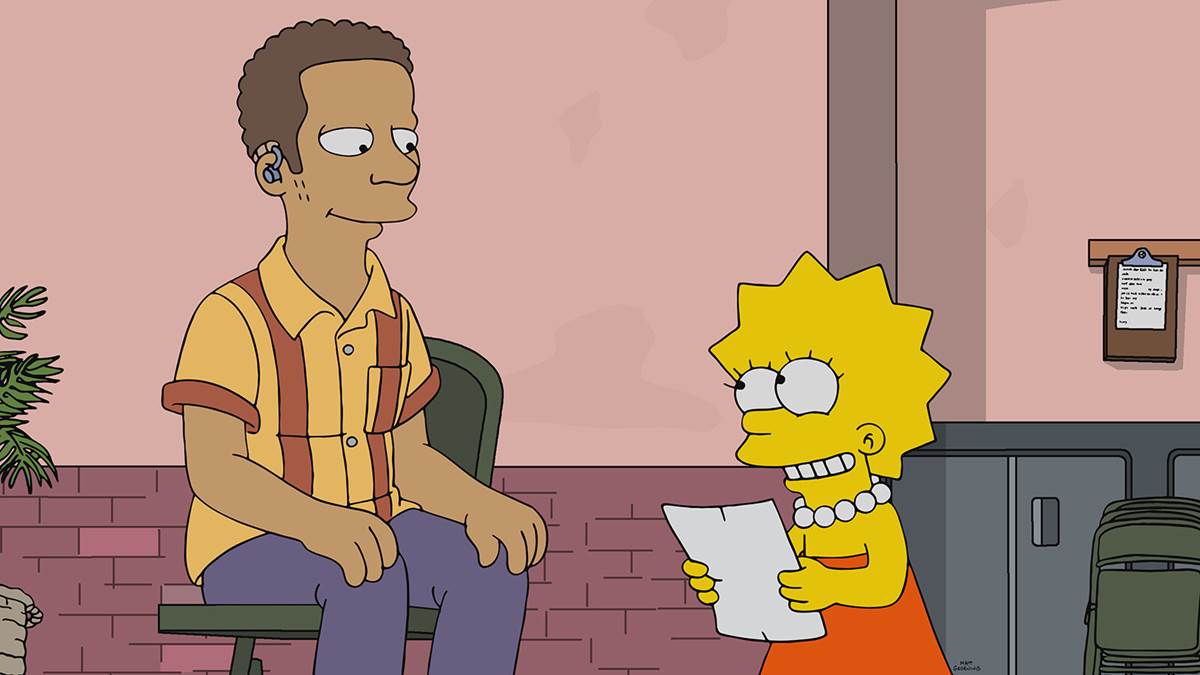 Hello and welcome to Laughing Place’s regular recap of new episodes of The Simpsons on the FOX Network. This week’s installment, entitled “The Sound of Bleeding Gums,” is the 17th episode of the long-running animated sitcom’s 33rd season.

Couch gag: Lisa plays jazz on her saxophone in the living room, while the other family members are musical notes on a staff. A voice repeatedly sings “sell peanuts, sell peanuts” while Marge, Homer, Maggie, and Bart dodge the other notes as they scroll by. This ends with Homer bellowing out a bass-note “D’oh.” 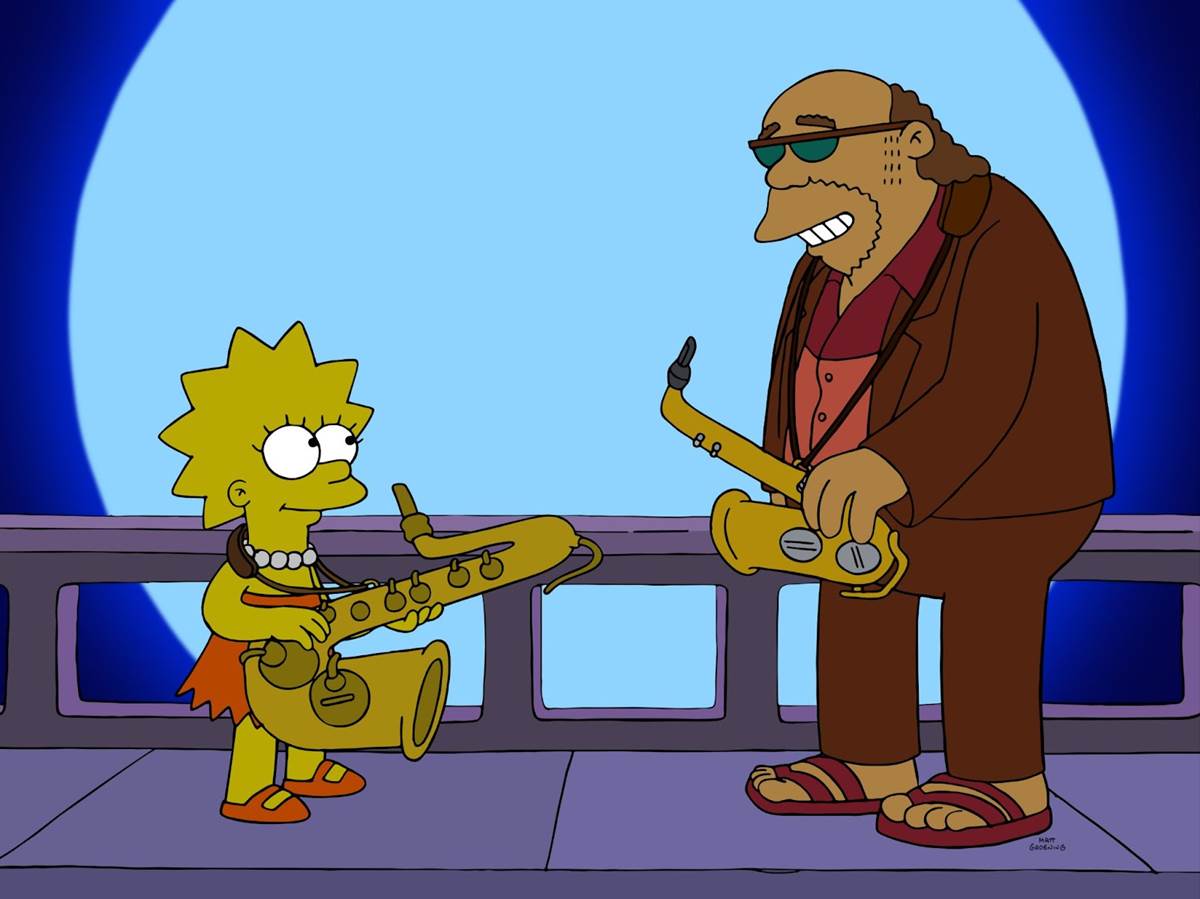 “The Sound of Bleeding Gums” begins with a flashback to the first-season episode “Moaning Lisa,” with Lisa playing the sax with Bleeding Gums Murphy on the bridge. In the present, the family (except Homer) watches an ad for a new streaming service called “Everything+” that features cartoons with all objectionable content edited out “so they’re four seconds long.” The next commercial is for the lottery and uses a Bleeding Gums song with changed lyrics, which naturally upsets Lisa. “He never would’ve sung this garbage,” she says. In the commercial, an actor plays Bleeding Gums hawking the lottery, and Lisa plays her family members the original version of the song, which is much more dour. “I can’t believe they’re using a jazz legend to sell lottery tickets.” Bart says the lottery is his retirement plan, but Lisa says it’s a scam to “trick poor dopes into buying tickets they can’t afford.”

At that moment Homer enters holding ten lottery tickets and singing the song from the commercial. Lisa says Bleeding Gums was anti-gambling, and she knows this because she runs his website “Gumdroppings.” Later, Lisa rides her bike around town and everyone is singing the lottery song. Even Reverend Lovejoy and Helen endorse the lottery, claiming that Jesus said, “You gotta play to win.” Lisa arrives at her favorite jazz club the Jazz Hole and tries to drum up support among the performers there, but they’re not too concerned about the controversy: “America’s only original art form is stealing black music.” Lisa wants to start a boycott of the lottery, but everyone in the club becomes distracted when Kent Brockman starts announcing the lotto numbers on television. Brockman himself is disappointed that he didn’t win the lottery (though he already did in the third-season episode “Dog of Death”). At home, Homer tears up his losing tickets and Lisa grumbles about “a jazz god’s work” being misappropriated. She vows to fix the problem, though Homer advises her not to waste her time fixing lost causes. That night, Brockman hosts a debate between Lisa and the Blue-Haired Lawyer, representing the State Lottery. “Bleeding Gums would not want his incredible music used for this carnival of greed.” The lawyer grills Lisa on Bleeding Gums trivia to prove that she’s a real fan, and she aces the test except for a question about the age of the jazzman’s son, who she is surprised to learn even exists. In her bedroom later on, Lisa cries because she didn’t know something that important about her idol. But an apparition of Bleeding Gums appears from the framed photo on her wall and tells her not to worry because to him, she’s perfect, “but I’m just an image created by your mind, so I say what you want.”

Bart tries to cheer Lisa up by shooting her with suction-cup darts, but that doesn’t work so Lisa vows to find Bleeding Gums’s son. The photo of Bleeding Gums somehow gives Lisa a clue about his son’s name, and Lisa tracks Monk Murphy (guest star John Autry II from Glee) down at his home. Monk invites Lisa in to reminisce about Bleeding Gums, and Lisa tries to play a song that the jazzman recorded for his son, but Monk reveals that he can’t enjoy the music because he is profoundly deaf (though still wears hearing aids for some reason?). “His whole world was music and me, so he took it kind of hard when he found out I couldn’t hear.” We see a flashback of Bleeding Gums sneaking into his home late at night with a bandmate and trying not to wake up baby Monk, but when the percussionist slips and drops his cymbals multiple times, Bleeding Gums realizes that Monk is deaf and cries. At the hospital, Dr. Hibbert offers to fit Monk with cochlear implants: “But I have to warn you– it’s only for rich people and doctors who get a huge discount.” Bleeding Gums vows to pay for the implants, but then admits he only makes $16 playing jazz on a good month. In the present, Lisa tells Monk that the lottery is using his father’s song, and Monk says he hasn’t received any money as royalties. “My new mission in life is to make you happy,” says Lisa, but Monk says he’s not anybody’s cause. “I enjoy who I am. I love my community.” In response, Lisa says they’re going to bring the music publishers to their knees and starts going on a rant about her crusade, but Monk simply blocks her out by closing his eyes. Still, Lisa drags Monk to the Jazz Hole, where a memorial wall has been erected in honor of jazz greats. She meets jazz legend Etta Pryor (Dreamgirls star Dawnn Lewis), who knew Bleeding Gums.

Etta says she wrote “so many songs” about Monk, but another jazzman says no one knew Bleeding Gums better than him, though he doesn’t know who owns the rights to his music. The musicians in the club then all perform a song about how Bleeding Gums was a bad businessman, though Lisa joins in to sing that the song is “not helping.” Monk finds a framed record from “Treasured Artists Records,” which Lisa determines must be Bleeding Gums’s publisher. They visit the office of the record label, where the owner makes them sign a non-disclosure agreement, then tells them that Bleeding Gums signed a contract without reading the boilerplate, “but he got his share.” We see a flashback of Bleeding Gums receiving a royalty check for 92 cents and complaining, “This is half of what they promised!” Lisa vows to sue Treasured Artists, but the owner says they don’t have the rights to Bleeding Gums’s music anymore. 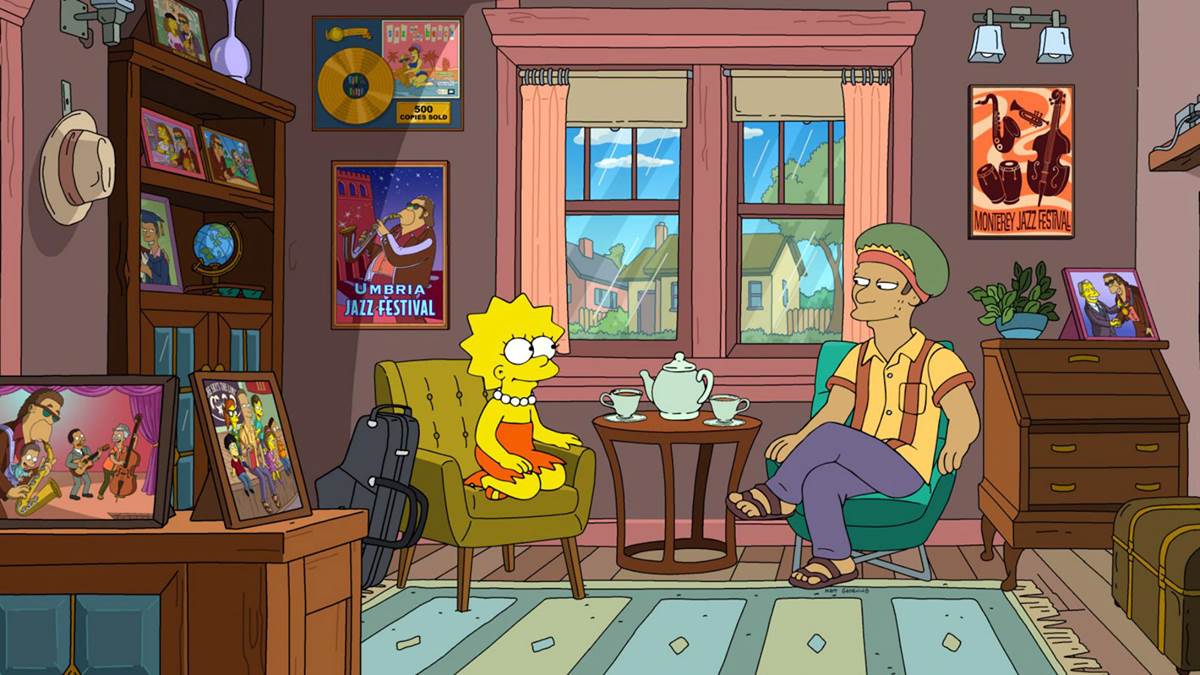 Lisa wants to go up against the consortium that now owns the rights, but Monk says he doesn’t want to because he’s happy– or he was until Lisa showed up. “Please stop helping me,” he says, and Lisa returns home ready to quit. “I’m proud of you, sweetie,” says Homer when he hears this news, and he’s even prouder of Bart for never having tried. Marge notices Lisa is depressed and offers to talk to her, but Homer says it will ruin “all his hard work.” The episode then lifts an exact joke from the season-seven episode “A Fish Called Selma” with Homer asking Marge to close her eyes because he’s trying to sleep and they’re too bright. Having had enough of sad music, Lisa takes a walk to the bridge where she once met Bleeding Gums Murphy, whose apparition appears again: “I’m always here for you, like Will Smith in The Legend of Bagger Vance– or better yet, Morgan Freeman in Driving Miss Daisy.”

We see a fantasy sequence starring Lisa and Bleeding Gums as Daisy and Hoke from Driving Miss Daisy, but their car crashes into the one being driven by Tony from Green Book, with Dr. Donald Shirley riding in the back seat. On the bridge, Lisa decides to “surrender to reality.” “Little Lisa, you’re finally starting to understand what the blues is all about,” says Bleeding Gums. Lisa visits the school for the deaf when Monk works to find him directing a production of William Shakespeare’s Richard III. She apologizes to him, but Monk says Lisa doesn’t need to apologize. “Your dad saved me once when I was really sad, so when I found out you existed, I thought saving you was what I was meant to do.” But she now realizes that she should have listened to Monk when he said he didn’t need or want saving. Monk thanks Lisa, but says he’s getting the cochlear implant anyway. Lisa asks Monk how he got the money, and he says he came in ninth in the lottery, quoting the song from the commercial. “Forget I asked,” says Lisa. Two months later, doctors activate the device in Monk’s ears, and Lisa has picked a Bleeding Gums record to be the first sound he ever hears, but accidentally yells “Screw you, Bart!” when she realizes her brother has scratched a mean message into the record. “A forgotten prank made me the center of attention,” remarks Bart. Lisa plays the other side of the record, which contains the song “Monk’s New Tune” by Bleeding Gums Murphy. Monk smiles and cries at hearing his father’s voice for the first time. “This is totally going on the website,” Lisa says about the video she recorded on her phone. “You made a jazzman happy, Lisa,” says the Bleeding Gums apparition. “Also, what’s a website?”

In the imaginary black-and-white coda, Lisa performs with all her jazz musician friends, including Bleeding Gums, his son Monk, and the deaf students from his school, at the Jazz Hole. Bart complains about the family’s seats at the performance, so Lisa dreams him out of existence. A title card at the conclusion of the episode reads, “If you want to learn more about the lottery, please contact your local corner store, or look up Ponzi schemes.” 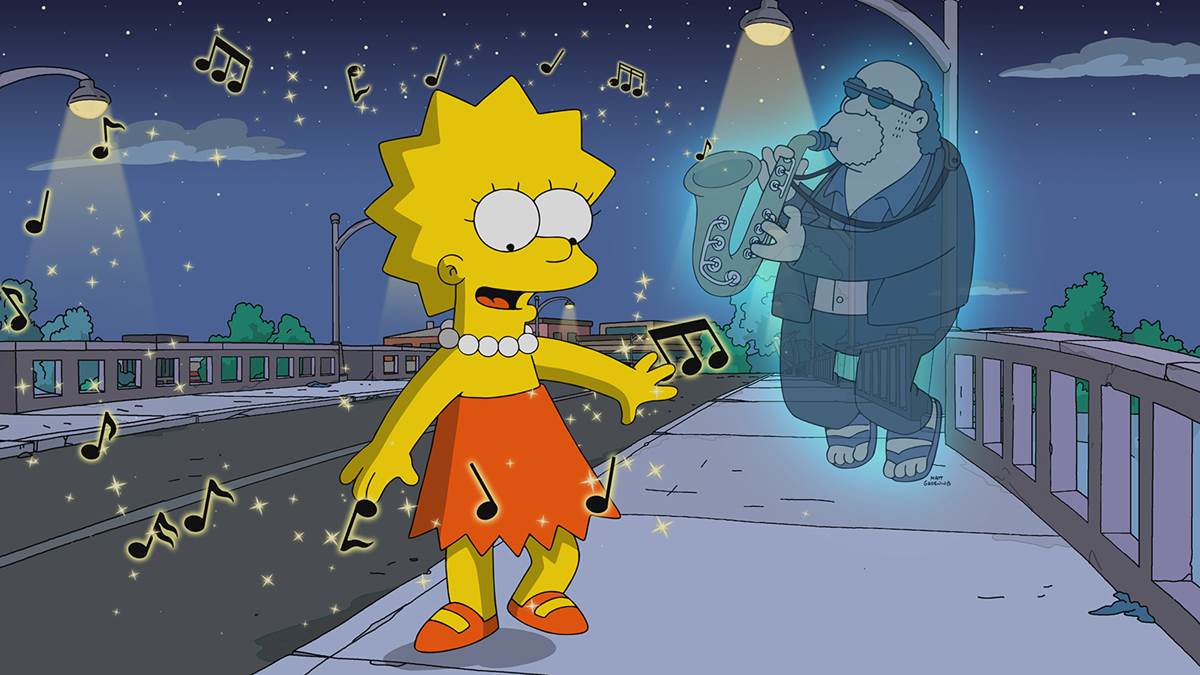