“It's been a dream of mine ever since I was younger to be a part of the Disney family but specifically to be a Disney princess,” actress Lexi Underwood said about her role in Sneakerella. In this contemporary musical adaptation of the classic fairytale Cinderella, premiering May 13th on Disney+, the Little Fires Everywhere actress actually plays the equivalent of Prince Charming, the daughter of a basketball star and sneaker tycoon who becomes a way for the main character, El, to achieve his dreams. “It's a coming-of-age story for Kira,” Lexi continued during a TCA press conference to promote the film. “She's finding her voice. She's taking control of her destiny, and she's also falling in love.” Sneakerella turns the Cinderella story on its head, gender-flipping all of the characters while also taking a new approach to the story. “I love Disney movies,” confessed executive producer Rachel Watanabe-Batton. “I went to Disneyland every year with my family, and I think we all have an idea of what our prince or princess is and what would have made it more accessible. And so I think we, together, all tried to infuse this film with those things, and we really came together as a family. I think that’s one thing that is especially reinforced in this is to see the two families.” El may be the character whose name is in the title, but Kira and her family get plenty of screentime. “There were so many levels at which this is a more inclusive kind of telling of Cinderella. And aside from the sneakers, and the gender reversal, and all of those things, it’s also thinking very much about who’s in your community and asks you to look out into your community, to look at your neighbors, to think intergenerationally of who might help you. Not just your friends, but maybe that guy or woman who’s in the garden, who’s 70 or 80, is your magic, just that little bit that you need, that encouragement. And I do think this Cinderella, this Sneakerella, is just going to blow people away and bring us joy, and I think that’s what we need right now.”

“Embrace who you are because that's what makes you special,” actor Chosen Jacobs said of the message viewers should take away from his character El. Portraying an aspiring sneaker designer required the actor to not only walk in someone else’s shoes but also dance in them. “My first time dancing professionally was for this film. So it was a huge undertaking but with the great team we had, I think we truly made something beautiful. And dancing in the sneakers, I play sports, so I've always felt like sneakers are kind of the best shoe for everything… The shoes were magical, Disney shoes.”

“After my second championship, I made my own sneaker,” former NBA star turned actor John Salley said of his role as Darius King, Kira’s father and sneaker tycoon. “I know what it's like to sit around and try to make something that's fly that you think a lot of people are going to like. So when I watched this movie and I was in it, it was like they were doing my life.” In a film about wish fulfillment, John Salley described how his current career is the culmination of a lifetime of dreaming. “I’ve always wanted to be an actor, and then I kept growing, and I used to ride a skateboard, my brother told me, ‘There are no seven-foot skateboarders or hip hop performers,’ and so I went into my passion, which was basketball… I used to tell my mother I was going to be on that screen and in that box, meaning the television, not the other box.” 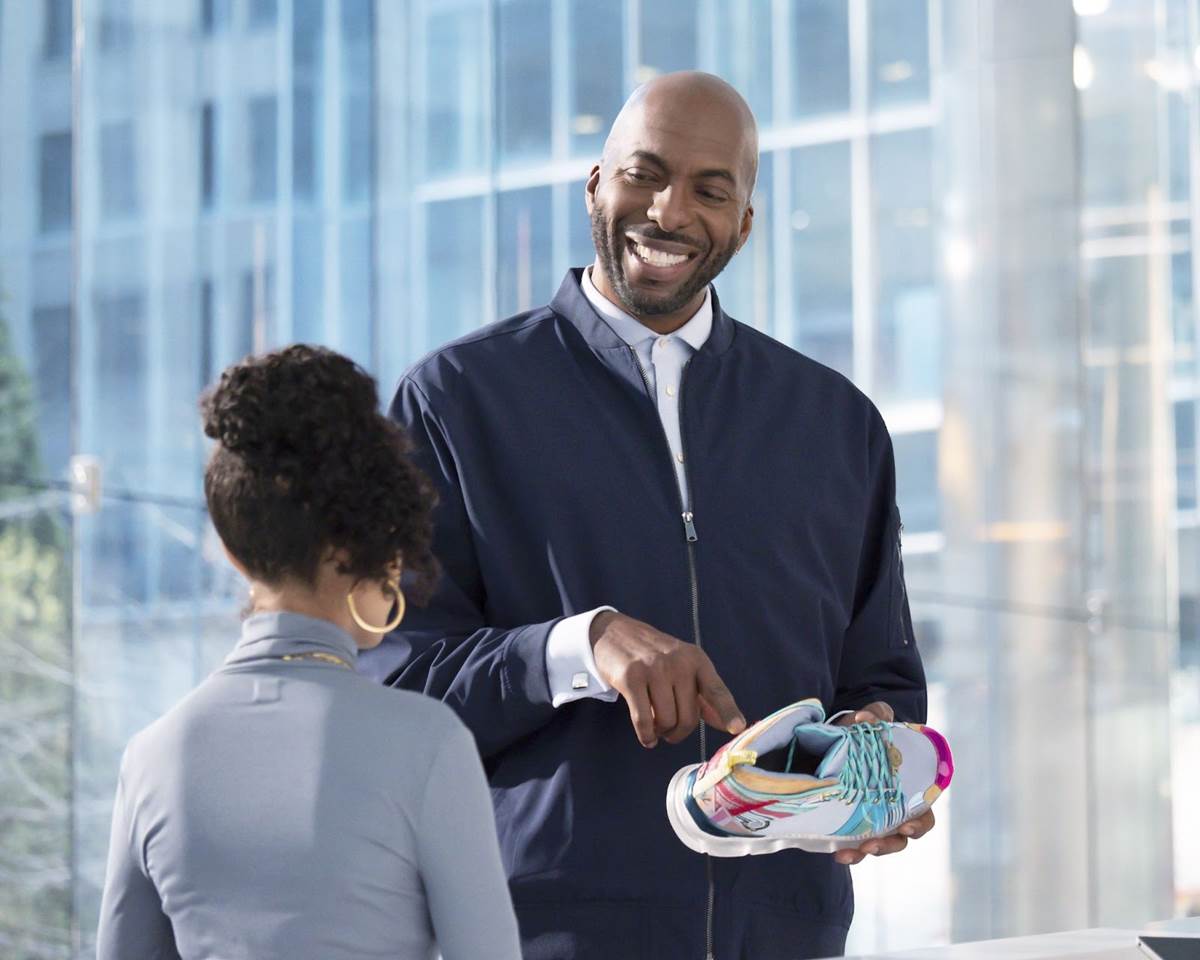 “I was involved in this from the very beginning,” executive producer Jane Startz shared, who is no stranger to Cinderella stories, having also produced Ella Enchanted starring Anne Hathaway. “Rachel and I wanted to do a story where the main two protagonists had agency, and they were active. They were proactive. They were creating what was going to happen to them. It wasn’t a matter of chance. It wasn’t a matter of magic. It is that they knew where they wanted to be, and they really strived to get there, and they brought in community, and they knew they had to rely on people who loved them. I think stories that really open you up to the world are really important and this story, the message in our story, I think is so hopeful, and so active, and gives people an opportunity. Every kid, every person should be able to realize who they want to be, and that is what the movie is about, and I applaud that.”

You can see El and Kira become who they’re meant to be in this contemporary music-filled adaptation of Cinderella only on Disney+ starting Friday, May 13th.