Walt Disney World and Universal Orlando offer world class attractions and top-of-the-line entertainment, but they also offer a whole lot of great food and beverage offerings. And for all the people out there who say theme parks are just for kids, I’m hear to tell you, they also have a whole lot of great exclusive beers.

That’s right, across the theme parks of Orlando, you can find a wide variety of beers that can only be found in those parks. There are a lot of options and admittedly I haven’t tried them all (yet), but I’ve made my way through quite a few of them and I’m going to do my best to rank the top 10. So, here are my top 10 Orlando theme park beers. 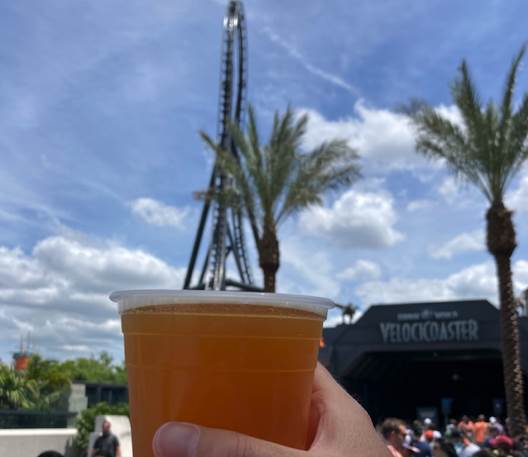 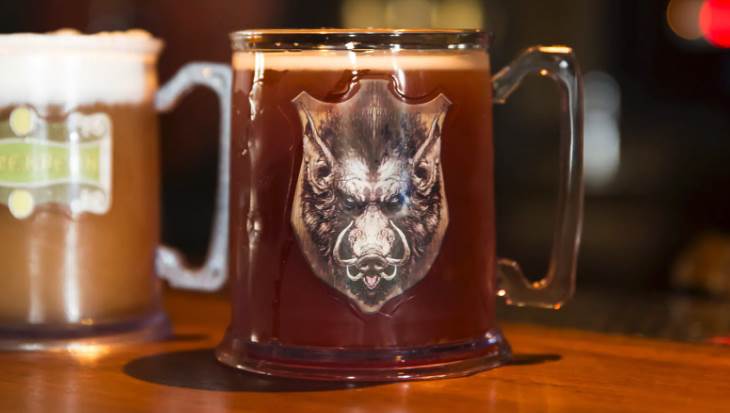 Found in various locations around the Wizarding World of Harry Potter, Hog’s Head Brew is a Scottish ale from Carib Brewery. This is the kind of beer you would expect to get as you look around at your surroundings in either Diagon Alley or Hogsmeade. It’s rich and a bit heavy, which doesn’t make it ideal for a hot Florida day, but it’s great if you get a cooler day or can grab a seat indoors somewhere. 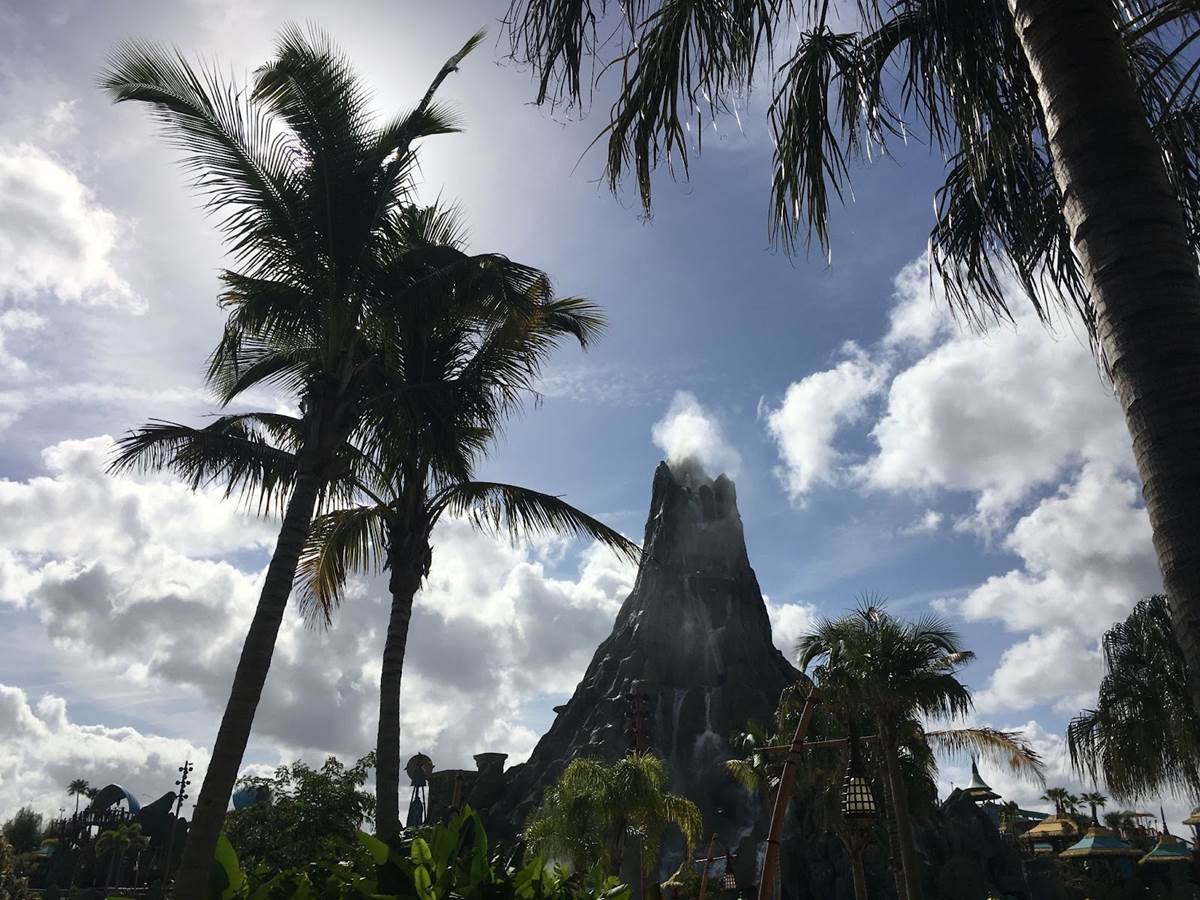 Yes, even Volcano Bay has it’s own beer. Volcano Blossom is a pilsner from Orange Blossom Brewing Company that can only be found at Universal’s water theme park. This is a very light and crisp option with some floral notes. It’s perfect for a hot day and light enough for you to enjoy before hopping back on Krakatau. 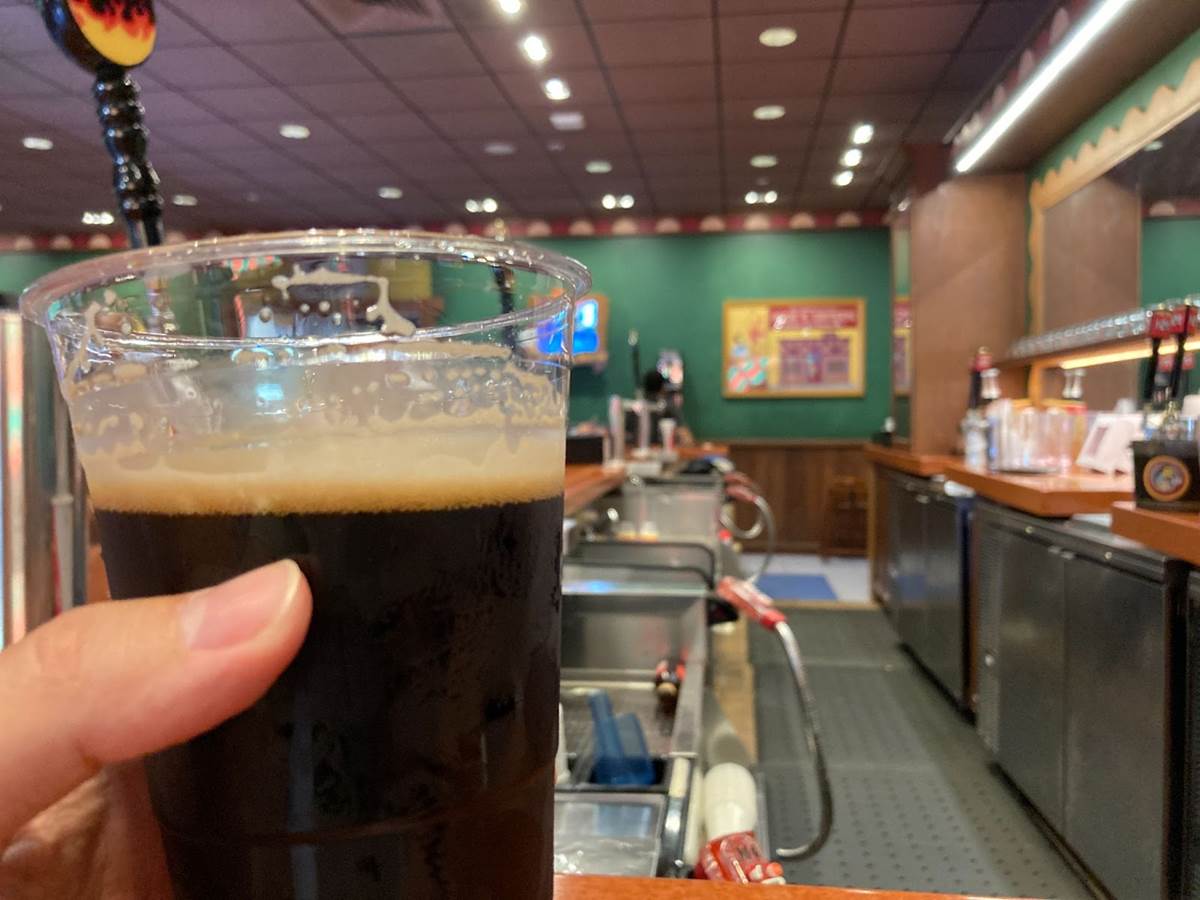 Sometimes the beer is about the full experience. Getting to sit in Moe’s and enjoy a Duff is a dream come true for a lot of people out there. And when it comes to the Duff options that are available year round, Duff Dry is the winner. This beer is a stout from Carib Brewery, so it’s another one that’s not great for walking around in the sun. However, if you can grab a seat in Moe’s, it’s a perfect compliment to the never-ending loop of The Simpsons clips. We’ll stick with stouts for now. Another one from Carib Brewery, Wizard’s Brew can unsurprisingly be found around the Wizarding World of Harry Potter. A richer and sweeter taste than the previous option on this list, Wizard’s brew is one of my favorite stouts, but it’s not quite my go-to in the Wizarding World. Our first brew from a galaxy far, far away, White Wampa Ale is a hefeweizen from Ballast Point Brewing. This one really gives you a unique taste with a banana and citrus profile. It sounds weird, but the banana is pretty faint and it’s really more of a wheat taste. Also, this beer, like all drinks, will always taste better when enjoyed in Oga’s Cantina. 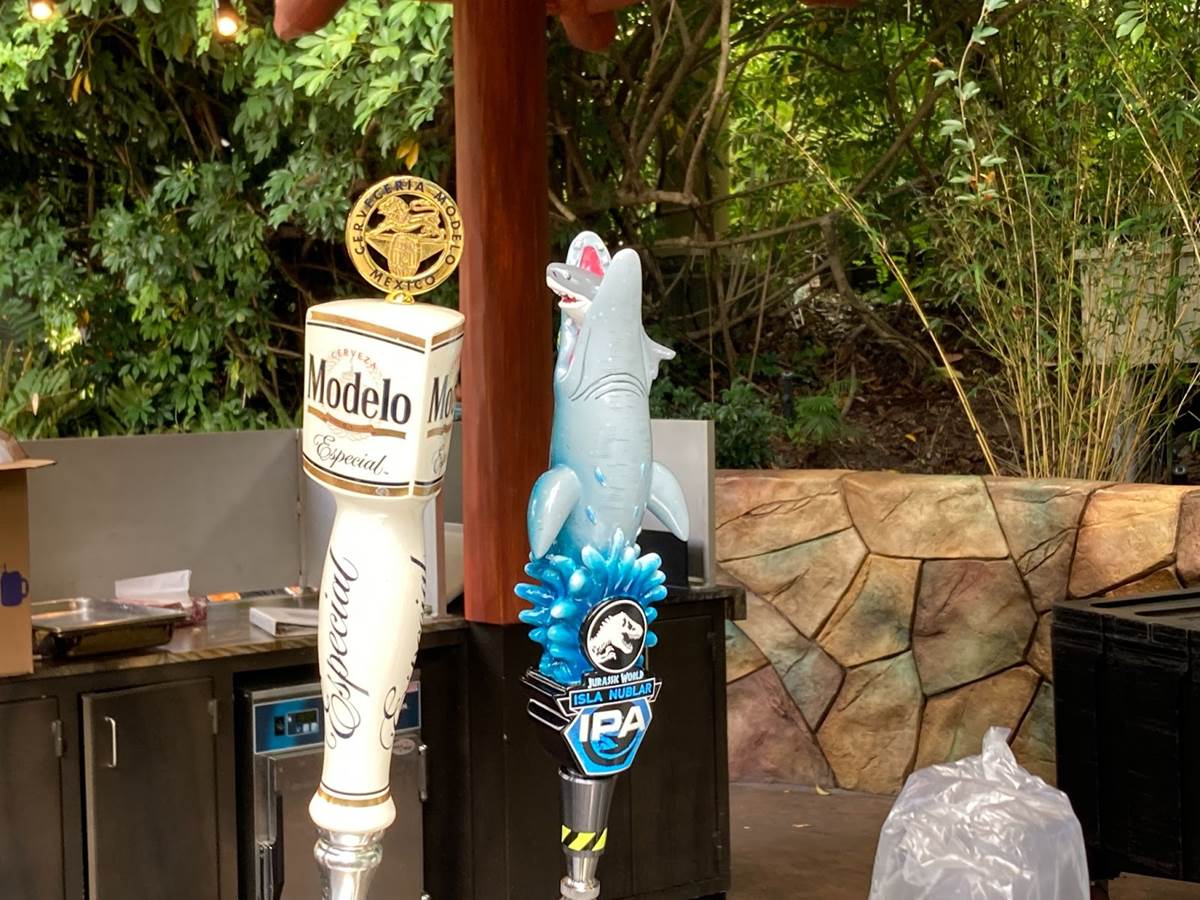 Did you know Universal has a Jurassic World beer? Isla Nublar IPA is not as promoted quite as much as most of the others on this list, as it is only available at small booth, but it is certainly one of the best. An American style IPA from Carib Brewery, Isla Nublar is a hoppy and citrusy beer that is light, crips and perfect for a hot day. We’re heading back to the Wizarding World one more time. Like its counterparts, Dragon Scale is brewed by Carib Brewery. However, this one is a red lager with a lot of flavor and a crisp and refreshing profile. While the other Potter beers are good, this is the one you’ll want in your hand while you’re walking around Diagon Alley. Pandora – The World of Avatar at Disney’s Animal Kingdom is an absolutely beautiful land and a great place to just hang out and take in the sights and sounds. But it’s also a good place to take in the flavors and Hawke’s Grog Ale is my personal favorite. An American pale wheat ale from Terrapin Beer Co., Grog Ale is light, citrusy and crisp, perfect for a hot day in the Valley of Mo’Ara. It’s also green, which gives it a fun element that ties it in perfectly to the floating mountains and colorful flora around you. Gold leader standing by. There are a lot of delicious cocktails and brews in Star Wars: Galaxy’s Edge, but the Gold Squadron Lager is my drink of choice. A light liger from Blue Point Brewing, Gold Squadron is unique in its taste, with notes of lavender and plum. That is not a combination you see very often in anything, let alone a beer. And believe it or not, it really really works. It’s a light-yet-satisfying beer that will complete your Star Wars experience, whether you’re exploring Black Spire Outpost with Rey and Chewie or sitting with the scum and villainy at Oga’s Cantina. 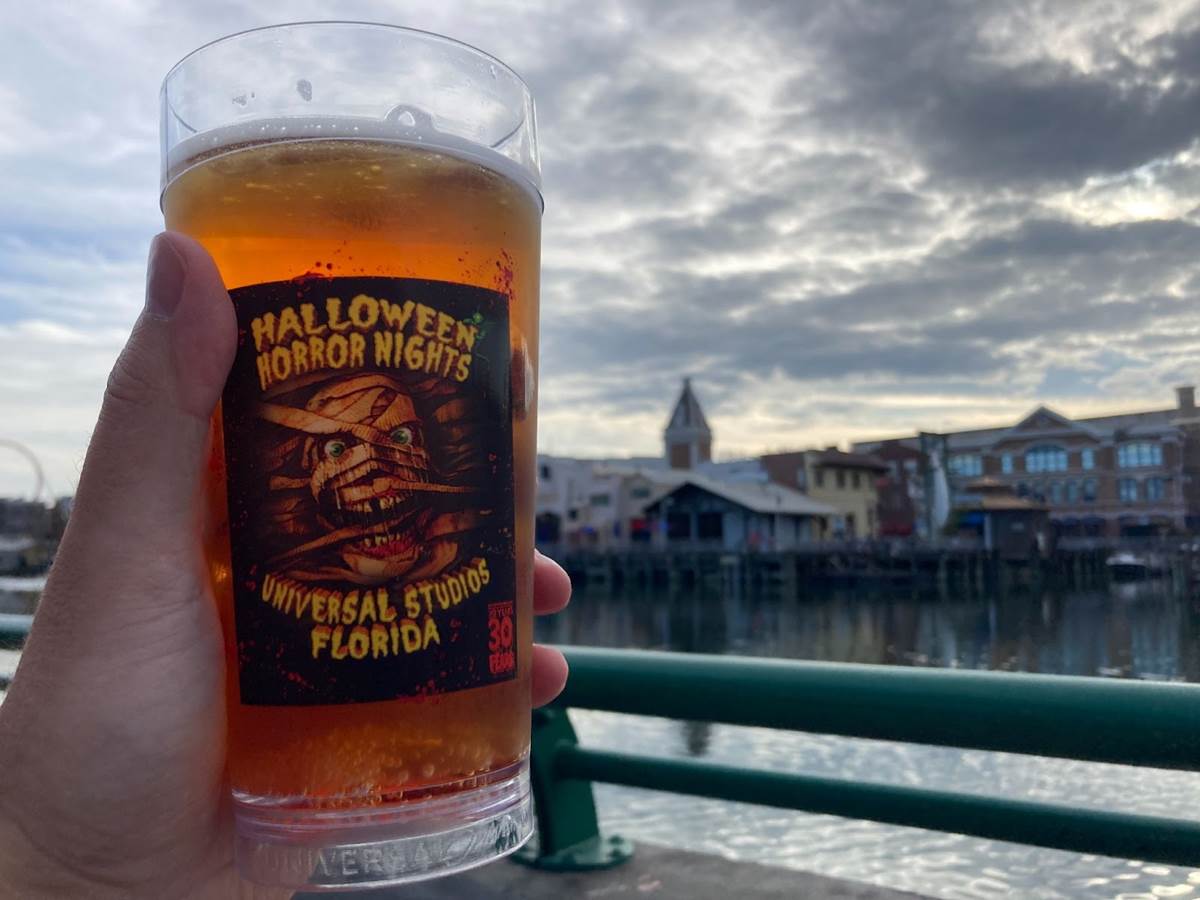 Remember that bit I said about the whole experience influencing the beer itself? While Dufftoberfest can stand on its own as the most delicious beer on this list, it’s also the unofficial beer of Halloween Horror Nights at Universal Studios Florida. Available in Springfield for a limited time each year, Dufftoberfest is a marzen from Carib Brewery. It’s light, relative to other Oktoberfest-type brews, but it still has that malty taste that makes them so great. There is nothing better than starting your Halloween Horror Nights experience with a “Stay and Scream” wait in Moe’s with a Dufftoberfest in hand.

What do you think of these rankings of the Orlando theme park beers? Be sure to check back for more rankings like this in the future.