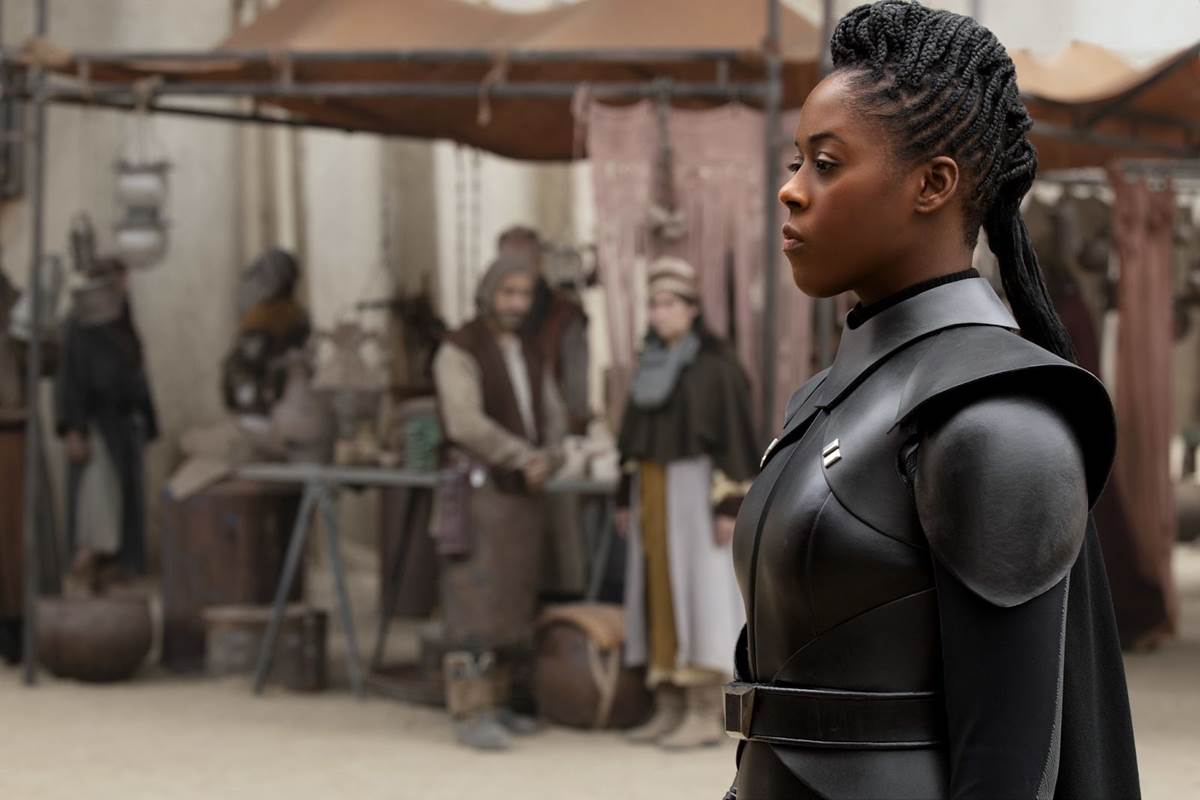 Actress Moses Ingram has only been appearing in television and movies for a few years, but she’s already racked up an impressive filmography: she was Jolene in Netflix’s The Queen’s Gambit miniseries and Lady Macduff in director Joel Coen’s The Tragedy of Macbeth, and now she’ll star alongside Ewan McGregor and Hayden Christensen in the highly anticipated Disney+ limited series Star Wars: Obi-Wan Kenobi.

During a recent press conference, Ingram spoke about her role as the Third Sister, AKA Inquisitor Reva, her costume and action sequences, and why she couldn’t say ‘no’ to being in Star Wars.

“I think it came to me just like everything else does, but I didn't know that it would be Star Wars,” says Moses Ingram about first finding out about the project. “I was surprised. I mean from what I knew of Star Wars, I didn't realize it was that dangerous. What I was reading felt dangerous and I was like, ‘Oh, I like this. I'm into this.’ So I was really excited. And I think when I read the script, that was the thing that attracted me the most, even though it was, like, ‘dummy sides’ [fake dialogue created for the purposes of auditions]. But later on, realizing that it was edgy and fun and cool and I just couldn't say no. I mean, it's Star Wars.” Asked to expand on what felt dangerous about the script, Ingram replied, “It's hard because [I’m not allowed to] say exactly what's happening, but the cat-and-mouse of it all, and so many moving parts in it, and the places that we are, and the people that are involved– I really wish I could say more to you about what was happening. But even the text just felt very sort of muddy in a way that I really enjoyed.”

And what does Ingram like about inhabiting the character of Reva? “She's really smart and she plays the offense and she's always ten steps ahead. She is a subordinate of Darth Vader and she's going to do everything she can to get the job done to the best of her ability. I think I was most intrigued by just her fervor for what she does. It was really fun. It's fun to be bad. [laughs] And also, the weaponry and the stunt work, once you get to a point where your body is confident doing the moves, that plays into it as well as the costumes. Our costume designer did an amazing job– building something that when you step into it, it lends itself to a feeling. So I was happy to be there. I really was.”

Did Ingram bring anything to the way Reva looks? “The costume was already made, [but] her hair was different in the initial envisioning of the character. It was just something that my hair didn't do naturally, but [director Deborah Chow] was so great about hearing me out on that, and that's how we ended up with the braids. It's really important for me to do what my hair does. The hair was a big deal.” Ingram also spoke about the empowering nature of being a strong female villain. “I remember growing up and watching certain things with my brothers and [they would say], ‘You’re not strong enough’ or ‘It's for boys,’ you know what I mean? But I think what's cool about this is you can fight like a girl and still be badass, which is pretty cool.”

How did she go about training for the action sequences in Obi-Wan Kenobi? “It was cool. We trained for about four months before we ever even got to set. Every day [we did] regular strength and cardio [training], and then three days a week of Jedi school on top of that, which at the beginning was a little intimidating, because I come in [and] we're doing lightsaber work. Of course, [Ewan McGregor has] been doing this for years. So he's like flipping it and wielding it and I'm like, ‘Oh God, I'm never going to get it. I look terrible. But, you know, if at first you don't succeed, try and try again.” But what are Moses Ingram’s thoughts on becoming a member of the ever-expanding Star Wars family? “This whole experience has far exceeded my expectations of what it might have been. I so enjoyed just going to work every day. We had such a great working atmosphere and there were so many lifelong Star Wars fans who were living their dreams by working on this series. And it's really nice to be a fly on the wall for other people's experiences of the thing as well. It has by far exceeded my expectations in the most beautiful way.”

The first two episodes of Star Wars: Obi-Wan Kenobi will be released this Friday, May 27, exclusively on Disney+.