Amy, Jake, Colby, Eva, and Vic aren’t a typical family by any stretch of the imagination, so when they all arrive in the peaceful community of Valley View, they can’t help but cause a little mischief. They’re actually a team of supervillains in hiding, better known to the world as Havoc, Chaos, Flashform, Surge, and Kraniac. But with a good-natured neighbor like Hartley, can the kindness of Valley View have an effect on this villainous family? The cast of Disney Channel’s newest sitcom, The Villains of Valley View, recently took time away from filming to answer a few questions about what goes on behind the scenes. Scroll to the bottom of this post for the full video interview. 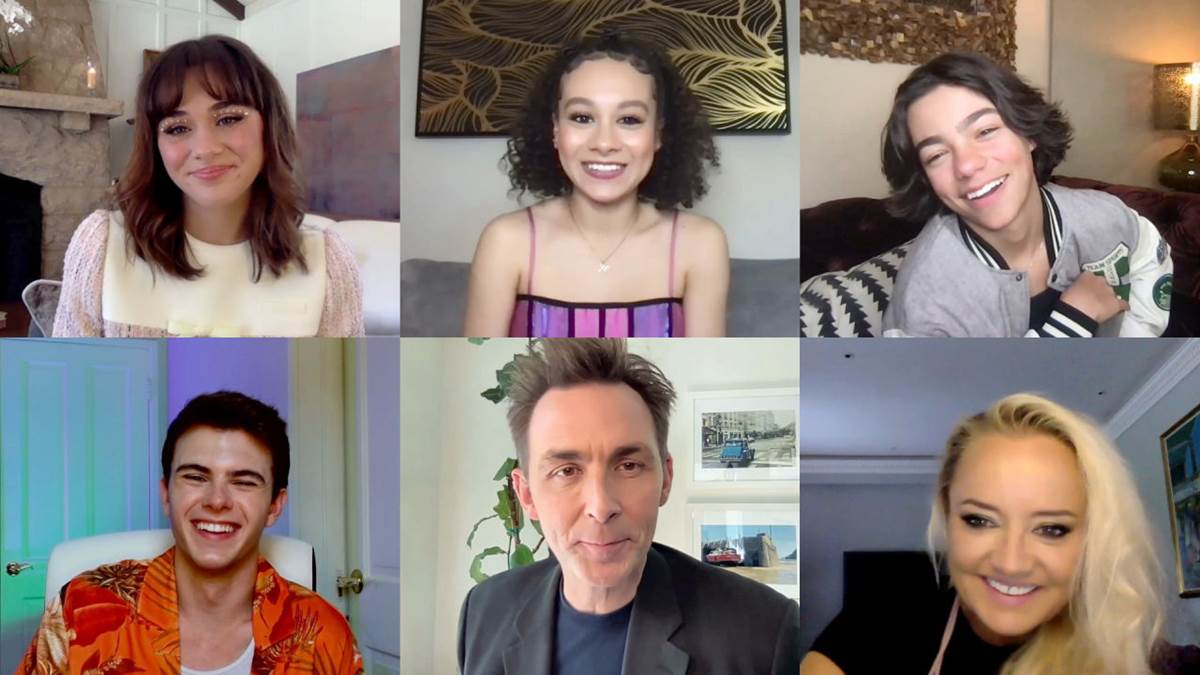 “We’re best friends,” Isabella Pappas said of her relationship with Kayden Muller-Janssen, who plays Hartley. Isabella plays Havoc, aka Amy, and her character has never had a friend before. “Our dressing rooms are right next door to each other. I always joke that we don’t have two separate dressing rooms because we just share one. We’re always in each other’s dressing rooms just talking.”

For Kayden Muller-Janssen, landing the role of Hartley was the culmination of years of auditioning for Disney Channel projects, starting with getting a callback for Andi Mack. “Six years later to finally be able to say ‘oh my gosh, I’m on a Disney show,’ I still haven’t comprehended it,” Kayden revealed. “Growing up watching Disney Channel, you want to be those people and now I get to have this moment. It’s amazing. I fell on my knees and cried because finally, after all the time and the effort and the energy that you put into these auditions, you finally get to have your moment.”

“I’m the only minor on this set, which is pretty cool,” Malachi Barton shared, a Disney Channel icon who starred in Stuck in the Middle, Under Wraps, and also lends his voice to Fancy Nancy, now playing Colby/Flashform. “The only thing that sucks is that when I’m in school, I’m alone, which is a good thing and a bad thing. I get the teacher to myself, but also I get pretty lonely in school.” It can be hard to focus on school when your cast mates are just outside the door watching movies or playing games. “This show is just amazing. I love the cast, everybody is super awesome, super talented, super fun to work with.” Not bad for a group of super villains.

“Sometimes there are fights,” Reed Horstmann said, who plays Jake/Chaos. He’s not referring to fights within the cast, though, but choreographed on-screen battles as part of the show’s plot. “We have an amazing stunt team that are there to make sure we’re doing everything safely. Granted, if there’s a stunt that we can’t do, then they have an amazing team of doubles. But a lot of the time they trust us to do things on our own and they’ll give us instruction and we’ll rehearse it. For Jake, a lot of his stuff is strength-based which are all practical, so everything I’m lifting I’m lifting in real life.”

Lucy Davis plays the matriarch of the family, Eva, aka Surge. “I haven’t done Multicam before and I haven’t played a villain before,” the actress revealed, who has worked in comedy on the British version of The Office and is no stranger to superheroes, having appeared in DC’s Wonder Woman. “One of the reasons I wanted to do it was for those reasons because I wanted to keep myself on my toes, try something new, learn something new… I’m learning that in Multicam, there doesn’t seem to be any allegiance to anything that’s happened before. That was a new thing for me, it suddenly went from terrifying to freeing… I’ve enjoyed playing a villain and someone who isn’t so much worried about the consequences of everything.”

James Patrick Stuart is known to millions of viewers as the nefarious Valentin Cassadine on the ABC soap opera General Hospital, taking on a new villainous role as the father of the family, Vic, aka Kraniac. “They’re obviously different,” James said of the two roles, the names of which both begin with “V.” “The Valentin character is a rogue, it’s a soap opera, a lover, he’s always after the women… Vic is a child. Vic is a kid. I don’t believe he’s beyond 14 years old and I love that because I think [I] was arrested emotionally at 14. I enjoyed it so much I decided that that’s where I was going to stay.”

Whether you’re actually 14 or just emotionally in that area, The Villains of Valley View promises to be fun for the whole family. Don’t miss the double-episode premiere on Disney Channel on Friday, June 3rd, at 8/7c. New episodes will debut on subsequent Fridays and Disney+ subscribers will be able to stream the first 5 episodes beginning June 22nd.