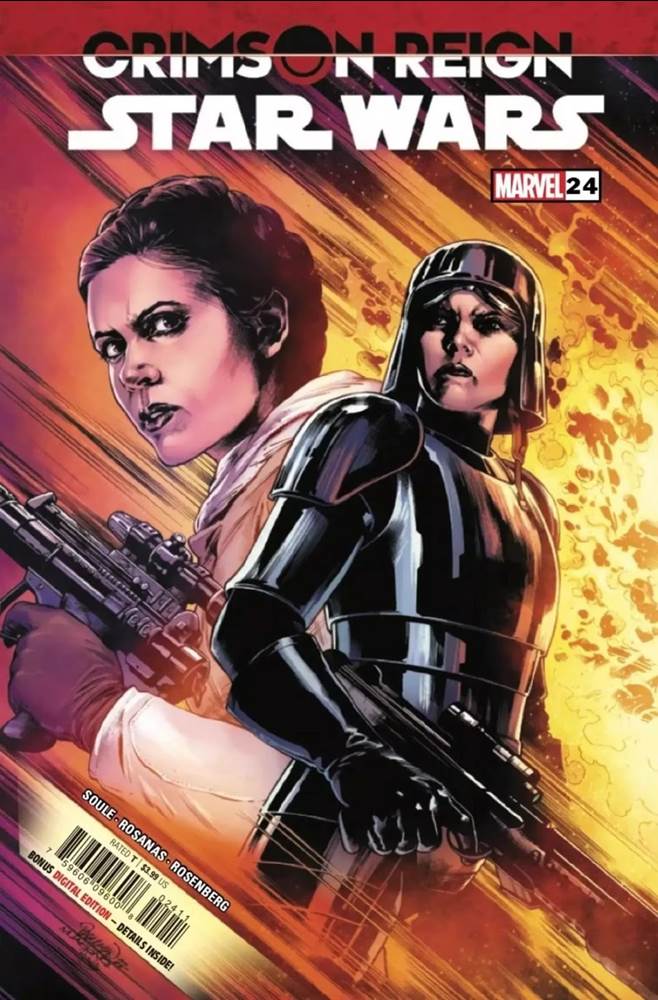 Since taking over Marvel’s flagship Star Wars comic book at the beginning of 2020, acclaimed writer Charles Soule has set a lot of subplots in motion– including the capture of rebel pilot (and Poe Dameron’s mother) Shara Bey by the Empire, and the antagonistic rivalry between Princess Leia Organa and Imperial Commander Ellian Zahra.

And now, after months of tangential sidetracks, those two storylines have finally gotten wrapped up in the latest Star Wars arc. Not that I’m complaining, mind you– I actually like when dangling plot threads like these pay off so much later. It makes me feel like the writer is actually paying attention and knows which characters he’s parked in different locations and situations when an extended diversion like last year’s War of the Bounty Hunters crossover events runs things off the rails for a little while. 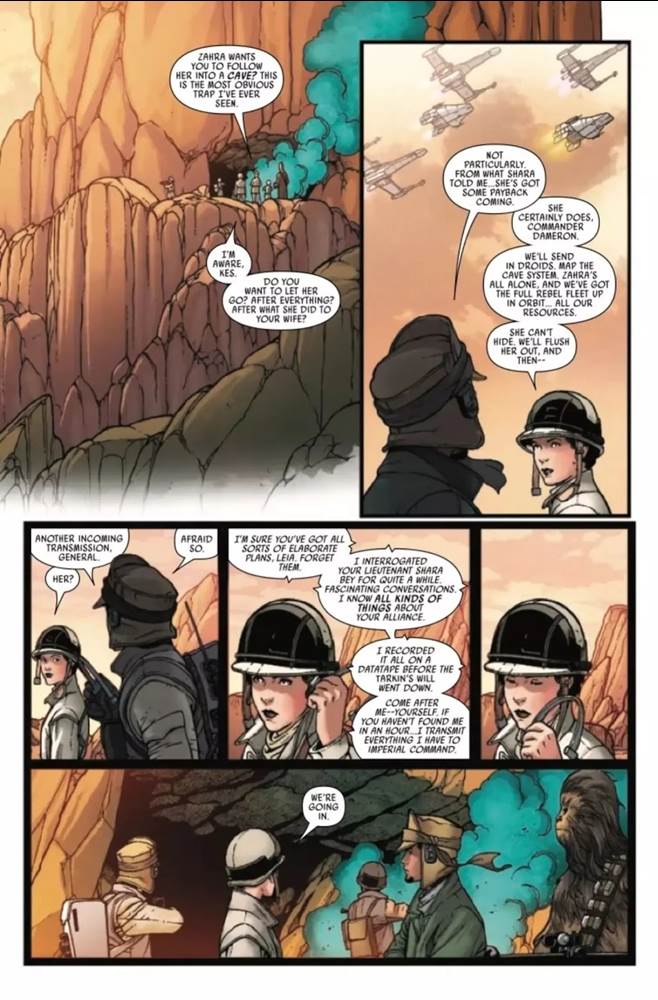 Regardless of all that, today’s issue #24 of the second current-canon volume of Star Wars begins where last month’s issue left off: with Leia’s rebel fleet having downed Zahra’s star destroyer the Tarkin’s Will on the planet Panisia. Mourning the loss of so many lives in the preceding battle, Leia declares Zahra the target of an all-out manhunt on Panisia’s surface, with Chewbacca, Kes Dameron, and Shara Bey’s Starlight Squadron all pitching in on the search. Zahra is ready for the confrontation, however, having ensconced herself in a dimly lit cave filled with flammable tibanna bat-droppings. A few more casualties later, the Alliance gang corners Zahra in the cave and a battle ensues, with our two leads on either side plummeting into an underground lake below. From there, Leia and Zahra must briefly form an uneasy alliance to fend off the cave’s vicious, glow-in-the-dark wildlife until they find themselves with nothing to fight but each other. 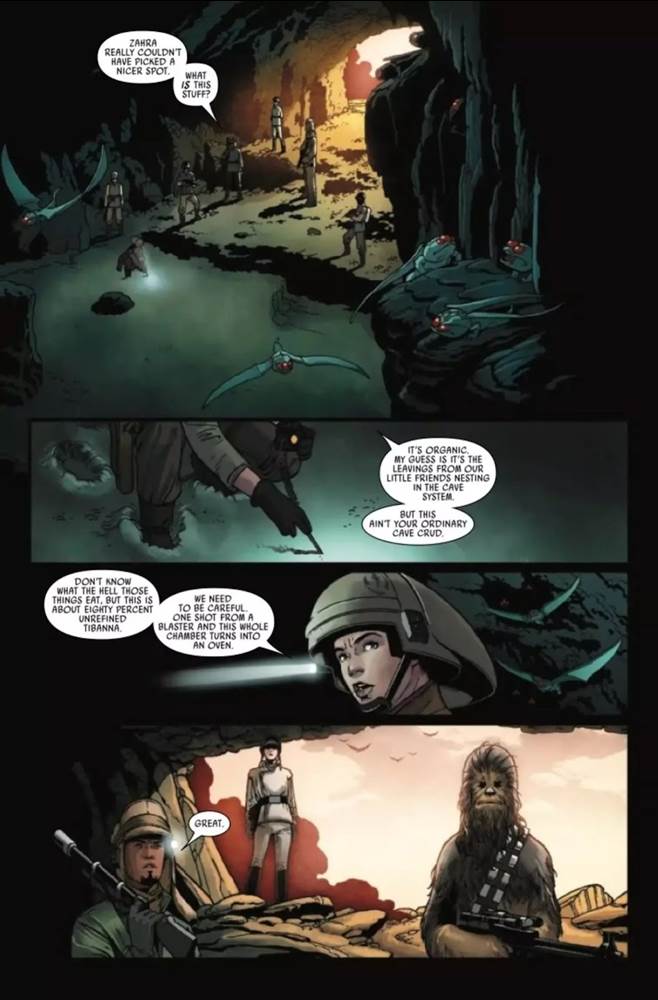 I think the end of Zahra’s narrative (for now, as we don’t actually see her die, and we know what that means in Star Wars terms) is a satisfying one, and Soule’s partnership with artist Ramon Rosanas (along with Madibek Musabekov and Rachelle Rosenberg’s noteworthy contributions) continues to prove fruitful in both visual and storytelling terms. In this issue I especially appreciated the atmosphere created by the illustrations in the caves and I love the grounded, no-frills depictions of the characters and vehicles, which go a long way into making the world of this comic feel believable and lived-in, as most good Star Wars tends to. The conclusion here feels appropriately hopeful, with Leia and company emerging from the darkness of the cave and into a promising chapter for the Rebel Alliance. Next month’s issue (#25) will mark Charles Soule’s 100th script writing for comic books set in A Galaxy Far, Far Away, and I can’t think of anyone else I would rather have helming the main title in this universe. 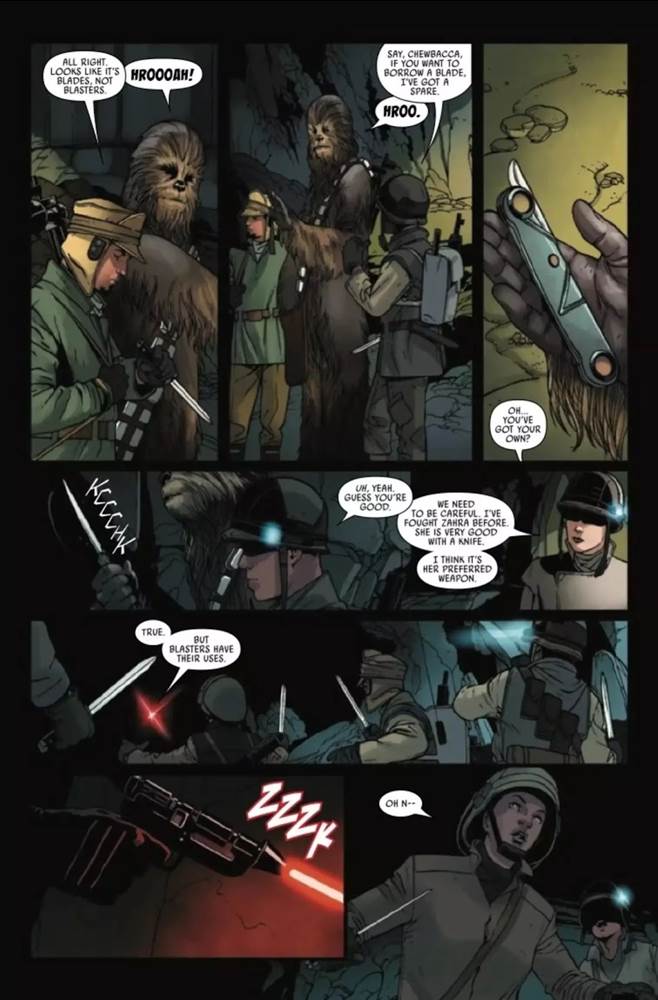 Star Wars #24 is available now wherever comic books are sold.