There’s a whole lot of unlucky situations happening in Brighton this week on The Ghost and Molly McGee, whether it be the whole town, or just within the McGee family. 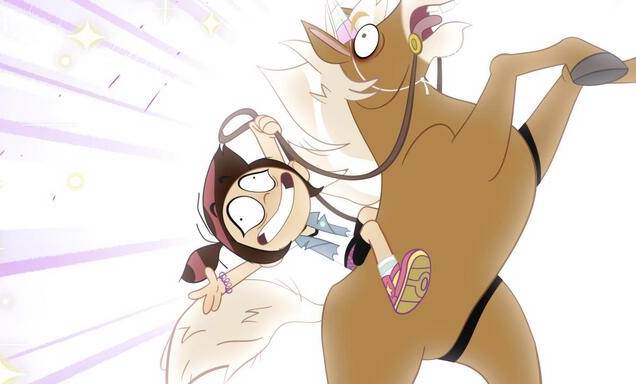 It’s Friday the 13th in Brighton, and Libby is really nervous because her usual bad luck is especially terrible today. While Molly laughs it off, Scratch ensures her that luck is in fact, very real, and Libby has every right to be concerned.

He continues to explain that good luck and bad luck exist in an equal balance but on Friday the 13th, it’s amplified. So, if someone is especially lucky, then they have a better day on Friday the 13th but if someone is unlucky, like Libby, their day will be awful. And plastic bags in the face and stuck potato chips in a vending machine are just the beginning.

Molly has the bright idea to see if Scratch can use his ghostly powers to transfer Molly’s good luck to Libby, just for the day. With the promise of some snacks, he jumps into Libby’s purse and pulls out a penny to embody the luck of Molly McGee, so anybody who has the penny will now have the good luck. Based on the smells coming from Molly’s shoes, Scratch’s penny curse has clearly worked.

At a point, Scratch causes Molly to bump into Libby and knock the lucky penny out of her hand. As it flies through the air, it conveniently lands in Andrea’s purse, who is nearby ordering some ice cream. While Molly just asks Scratch to make a new penny, Scratch explains that he can’t because what is about happen since Andrea’s luck is already good, it will now be amplified and create a vortex that will suck every ounce of good luck from everyone she goes near, a “Luck Suck.” And it has already begun. As soon as that penny landed in her bag, the machines at the Ice Cream truck went down and she was given her treats for free, while the fire hydrant exploded on someone else nearby.

The plan is now to steal the penny back from Andrea, but as she cavorts about town with sunshine and lollipops, everything near her is shrouded and darkness and misfortune, including Molly who’s attempts to steal the penny are thwarted by the universe favoring Andrea. All because Scratch wanted two bags of chips.

How do they get to balance out the universe again just enough to steal the penny back? They need someone terribly unlucky to begin with… LIBBY!

At the nearby market, Andrea walks in and happens to be the 1000th customer, receiving a prize and wearable sash. Libby approaches her asking for change for a donation to a made-up charity while the store around the two of them is erupting into unlucky mayhem.

The penny is handed off and the chaos in the store subsides. Confirming that the plan worked, the store employee who awarded Andrea the prize has come up and said their math was wrong and she was only the 999th customer and forced her to give the prizes back.

Scratch takes the luck out of the penny and transfers it back to Molly McGee, restoring the balance of luck which means bad days for Libby still.

The McGee house is without power, thanks to Scratch who blew a fuse earlier. The family is in the basement addressing the problem, but Instead of helping the family, Scratch is in the freezer saving all the ice cream before it melts. Molly goes to retrieve him, and in doing so, accidentally locks the rest of the family in the basement thanks to a slippery banana peel, a classic for a reason.

There’s no key for the door so it's up to Molly to figure out how to get them out, but Mom knows that she has a bit of a problem focusing on the task at hand. The pair head into town, concocting crazy schemes to get them out of the basement.

Meanwhile, the rest of the family is already going stir crazy, and need to look for supplies like food and such. Fortunately, they find a hoard of halloween candy, but speaking of hoard… Mom is already taking more than her fair share.

Molly has the plan to go to Larry’s pawn shop since he is so skilled and would likely be able to unlock the door. Too bad Scratch and Molly get distracted by another nearby store and miss Larry by only a few minutes, but it appears that he is on his way to go see a unicorn on display in a park nearby.

Back in the basement, Mom is making their final recordings on video showing the breakdown of their basement society. But Molly was right, Larry is in the park with the “unicorn,” and is challenged with distraction after distraction as she chases Larry down.

Apocalyptic battles ensue downstairs, and alliances have been formed. Eventually, Daryl secures a plunger to a wall and breaks it down, releasing an infestation of cockroaches into the basement.

Outside, Molly acknowledges her mom was right, she is easily distracted, and decides to stay focused and chase Larry down with a little ghostly assistance. They make it home, and Scratch, who has embodied Larry, has to de-possess him since he doesn't know how to unlock the door himself. Larry comes to, and the cover up over what happened to him is quickly brushed over as he is pushed out the door. Molly goes downstairs to find the rest of the family, broken, but rescued. The only concern mom has now…. What took Molly so long?

This episode of The Ghost and Molly McGee is now available on Disney Channel and the DisneyNOW app. You can catch up with earlier episodes on Disney+.