The last of a series of four Bollywood-inspired specials of the hit Disney Junior series, Mira, Royal Detective, debuted recently, and sent viewers to help Mira figure out what happened during the big Jalpur wedding. 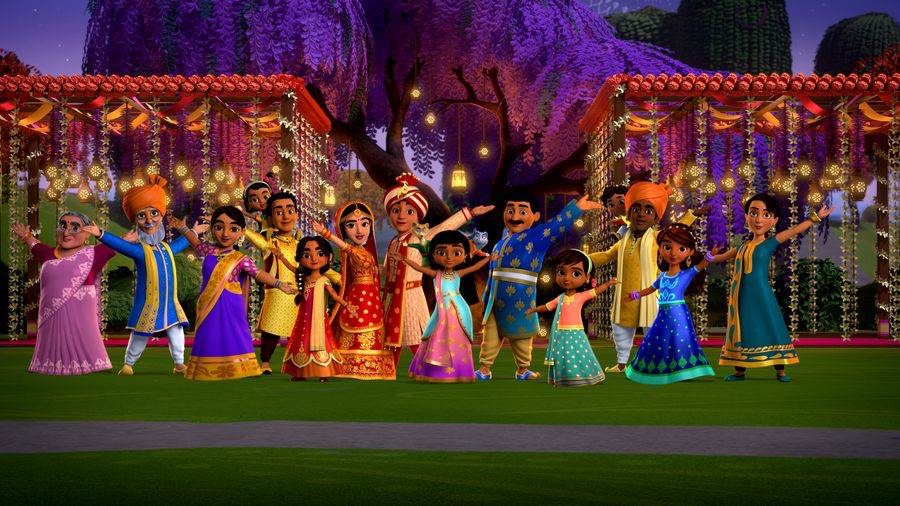 As was the case with many other episodes, we see Mikku and Chikku getting into some kind of shenanigans, this time with a new walkie-talkie system that channels the movies of yesteryear, with speakers on either end of a very long cord.

Today is the day of the big Jalpur wedding, and the mongooses (mongeese?) are on horse duty, making sure the horse that will be featured in today’s wedding is well taken care of. As we get to meet the characters featured in today’s special episode, we are introduced to the groom of the ceremony an other participants of the ceremony before we kick off the celebrations with a special song about weddings, just for today’s episode. You might recognize the underlying rhythm, as it is similar to the show’s main theme.

Fortunately, Mikku and Chikku have befriended the groom’s horse and they’re convinced the horse will lead them to the groom. They follow the horse to a nearby trough, and it seems that their new friend only wanted water. As they leave their walkie-talkie contraption behind to stay in contact with those at the ceremony, the find several of the flowers that have fallen off of the groom’s wardrobe.

The group follows those flowers and a series of clues that leads them into Jalpur’s marketplace. Chikku is entertaining everyone back in the ceremony with a rousing 12th round of cheering for the city. They clearly need to find the groom and fast.

Fortunately for Mira, they find another trail of flowers in the marketplace that leads them to a nearby stand where they discover that the groom was there, looking for a needle and thread. However, he left in a hurry and did not say where he was going? Back to the wedding perhaps? It doesn’t seem that way.

They come up with a theory since there are flowers everywhere, and all the clues feature some kind of fastening device like a safety pin and needle and thread, that the groom must be trying to fix something on his wedding outfit. Mira comes to the conclusion that there is one place that someone can find everything they would need in that kind of situation, the general store!

The group heads directly to the general store and sure enough, there is the groom looking for something sticky to help repair his outfit. Everyone is panicking about the groom needing to be back at the wedding, but he says he’s having a problem, and Mira knows what it is. The back of his broach is missing and needed some kind of replacement so he can look his traditional best on his wedding day. That’s why she is the Royal Detective after all.

They get the groom back to the wedding, outfitted in his finest, also thanks to the handy walkie talkie system that allowed Chikku to show up with their friend-horse ready to go.

The wedding ceremony begins and the Bride and Groom discuss the matching broach situation and she finds his efforts (and Mira’s help) to be very sweet. We get a bit of culture and see a montage showing the ceremony. After the proceedings, An elderly couple we’ve seen constantly mingling at the ceremony is revealed to be Manish and Poonam, the resident bandits in Jalpur in disguise. Not because they are trying to steal anything (aside from extra sweets) but because they never get invited to special things like weddings and they just want to feel included.

We are treated to another musical number, the most out of any of these four special episodes, in true Bollywood fashion with a big dance number.

A slow fade of the bulk of the cast reminds us, this is likely the final episode of Mira, Royal Detective.

This episode can be seen on Disney Channel, Disney Junior, and the DisneyNOW app. Previous episodes of Mira, Royal Detective are available on Disney+.