The season finale of The Ghost and Molly McGee is upon us, and it takes us on a two-part adventure in joy and misery throughout Brighton and the Ghost World. 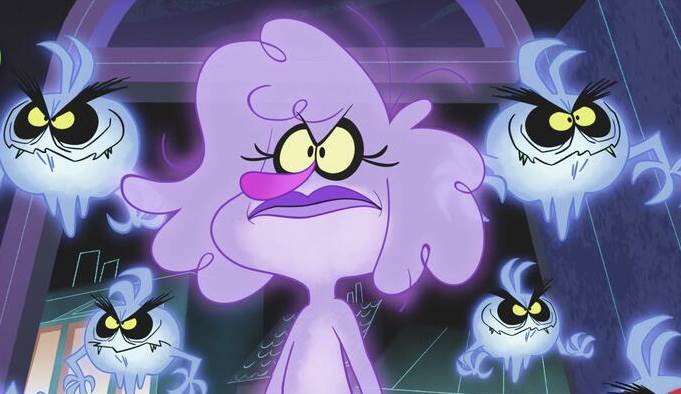 The Jig Is Up

As we’ve seen throughout the season, Scratch isn’t keeping up with his scare numbers and the joy and happiness in Brighton is increasing. Now, thanks to a viral video campaign thanks to Molly and her father, a new wind farm is on the way to town and providing the jobs that the residents need.

Naturally, the joy meter is off the chart, and Scratch is summoned to meet with the Ghost Council. Even with Scratch’s fudged scare reports, there is too much happiness in town, and the council has come to the conclusion that Brighton must be home to a “Joy Agent.” Scratch is shocked at this news, and quickly flashes back to every moment Molly did something for the town, realizing that his best friend is the agent in question.

Though Scratch tries to discourage the council from thinking this is true, it’s too late, and they already have a Joy Hunter named Jinx who is assigned to the case to search out Brighton’s source of happiness. You know, his best friend, Molly McGee.

Together, Scratch and Jinx head back to the land of the living and search high and low for the source of Joy, but Scratch is pushing Jinx away from Molly at every corner, going so far as to even come clean about his fibs on his scare reports and doing whatever he can to protect Molly.

Meanwhile, Molly is trying to throw a big party (complete with ice cream) to celebrate the new wind farm, sure to spread more joy, and since Scratch helped with the video that brought the farm, he needs to be there too. So while he and Jinx are on patrol, he’s desperately trying to get rid of Jinx to get to the party as well as save Molly.

Scratch is showing Jinx all kinds of decrepit locations and evading her to get back to Molly’s celebrations, but Jinx keeps showing up and thwarting his efforts. While showing her around, he has more excuses but Jinx seems to accept them very easily and passively…almost knowing something else is going on.

In this episode we also learn why ghosts need to spread misery. You see, the misery is what feeds the chairman, who we’ve seen around the ghost council and in episodes throughout the season, though we don’t know precisely who or what he is aside from just being the Chairman. After the explanation, the hunt continues with this episode’s musical number that is in the spirit of a James Bond film.

After the number, Jinx is increasingly frustrated because everything shows that this town should be miserable but there is some source of joy out there somewhere. Her scanner goes off and reveals that joy is near when Molly comes screaming around the corner in her ice cream truck. She suspects the joy isn't coming from a single place, but perhaps a single person. She narrows it down to Molly McGee and decides that she must be eliminated. As she goes to take care of the job, Scratch jumps in front of her and tells her that he can’t hurt his best friend. The jig is up (hey, that’s the title!) and Jinx’s suspicions were confirmed. She knew this whole time that he must be friends with the human.

Everything about this is against the ghost code, and Scratch will be sent into the Flow of Failed Phantoms for all eternity. He is pulled into the swirling vortex into the ghost world and away from Molly when this half of the episode ends, leaving a title card where “The Ghost” blows away in the wind leaving only “Molly McGee.”

And not even the jingle!

Molly Vs. The Ghost World

Scratch is now on trial with the ghost council, and Molly must figure out a way to save him from the Flow of Failed Phantoms. The whole McGee family is stressed beyond belief but Molly and Libby are on the case. Libby is pulling every ounce of knowledge she can from her supernatural books, but Molly quickly realizes she needs an actual ghost to help her out. She asks Libby the preferred way of spelling “Jeff” and that does the trick. Personally, the only time I’m glad someone summoned this particular character, Geoff.

Molly begs Geoff to bring her into the ghost world, but he can’t, he’ll get in trouble but she isn’t taking no for an answer. With the portal open, she tries to jump through but quickly falls out back onto her bedroom for, but she has been split into two parts – becoming a wraith. A wraith is a living person who has literally given up her ghost. Her body is alive, but nobody is inside it. Libby will stay behind with her soulless (and boring!) body, while ghost Molly jumps into the portal with Geoff to save Scratch.

Molly takes in the ghost world and is surprised how lively it is, even if it is outdated. Outdated, of course, to her. Nothing comes there until it dies. Geoff has a new flip phone and they even pass a video rental store. He points out where the ghost council is holding the trial with Scratch, but they have to be sneaky. Molly has a bright gold energy because of her joy and sticks out like a sore thumb around here. Oh, and everything she touches becomes brightly colored and floral. A sobgoblin has realized this and shows up at the ghost council with a lamp covered in joy. Scratch realizes Molly must be nearby but the council sends out Jinx to find the joy once again and eliminate it. Now for this musical number, showing Molly’s ability to spread joy throughout the ghost world and trying to hide it. Trails of flowers and rainbows and bright colors and even koalas pepper everything near her or that she touches. However, most ghosts don’t seem to mind it. Sobgoblins start to drain her but Geoff steps in and gets attacked so she could get away and save Scratch. Jinx tries to stop her but Molly faces her and boops her nose, giving her a nice floral crown and poisoning her with her joy.

The trial continues, and we see ghosts we’ve seen throughout the season briefly recapping their exploits from their earlier adventures. The Chairman makes his ruling and it's into the Flow for Scratch. But Molly shows up just in time to share her case and stick up for her friend.

Jinx shows up with Geoff and throws him into the flow for being a traitor while proclaiming that Molly McGee is a menace and everything she touches turns to joy, which no ghost wants. Is that true though? Scratch breaks and says that Jinx is right, but after a heartfelt speech, Scratch says that he agrees with Molly, and that he’s happy now too. They’re each other’s best friends. One council member says it will be unnaturally cruel to separate best friends, so they both are to go to the flow together. The pair are sucked into the flow together. The council is going back to business as usual, when joyful orange lightning starts cracking through the flow and we hear Molly’s laugh echo through the realm.

Everything Molly touches turns to joy right? That would also include everything inside the flow of failed phantoms. Ghosts start dropping around everywhere around them being freed (including Geoff), while Molly gives a speech about the power of joy. She comes down and faces the chairman, saying that being friends with a ghost isn’t wrong, he’s wrong, pulling back her fist ready to attack and instead booping his nose.

The boop leads to a big bang that echoes through the realm and results in the joyful melting and destruction of the chairman, terrifying the council and Jinx. Molly says she’s taking Scratch back to the land of the living, and there are no objections from anyone on the council. Her ghost form takes over her human form once again, and the family is reunited.

Scratch is so proud of his best friend, and Molly embarrassingly told her family that she did kind of kill the Chairman with kindness, but Scratch is back for good. Or at least until next season, when we see what happens to the ghost world and this ghost and Molly McGee when the show returns.

This episode of The Ghost and Molly McGee is now available on Disney Channel and the DisneyNOW app. You can also catch up with previous episodes on Disney+.