To this point, the MCU series on Disney+ have been leaving a lot of storylines to wrap up in their respective finales. In last week’s episode however, Ms. Marvel gave us what felt like a finale, bringing an end to the biggest part of the story. Now, Kamala and her friends just have to deal with Damage Control and keep everyone in Jersey City safe.

The episode opens with a look at the rubble from the explosion at the Circle Q. There is no sign of Bruno or Kamran but the DODC agent Deever, who has been heading the investigation, looks on and orders another agent to find the boy. She specifically says “this is what happens when the wrong people get power,” and clarifies that she means children. This seems reminiscent of a recent comic arc titled “Outlawed,” in which the government is stopping underaged superheroes from practicing vigilantism.

Bruno and Kamran are on the run from DODC and we find them on the subway. DODC agents find them and they bump into a man who shoves the two of them. That sparks Kamran’s new powers, which he clearly cannot control and he shoots hard light throughout the train before they run off.

Kamala announces to her family that she is “the light girl.” They sarcastically act surprised before revealing that Muneeba had already told them.Her whole family is very supportive of her new abilities but her father urges her to be careful and tells her that just because she can help people doesn’t mean she has to go looking for trouble. It’s a sort of antithesis to the “with great power…” Spider-Man line. She tells him she knows he wouldn’t want her to not help people when she knew she could and he seems accepting of that. The conversation is interrupted when Nakia calls and informs Kamala about the Circle Q explosion.

Kamala prepares to go out to find Bruno but Muneeba interrupts and gives her a homemade costume, the one we’ve been waiting to see all this time. People then see Kamala running through the skies of Jersey City as she leaps into action. We con’t get a good look at the costume just yet though.

Bruno and Kamran come to Nakia for help in her mosque and she tells them to go to the high school instead. DODC arrives shortly after and immediately begin searching the premises. Sheikh Abdullah and Nakia help stall them for the boys to escape. As they make their way out of the mosque, Kamala catches up with them. After she hugs Bruno, Kamra starts to explode with energy, clearly in pain from whatever is happening to him. Kamala doesn’t immediately tell him about his mother and her face clearly shows that she is struggling with that.

On their way to the school. Kamala breaks off from the others briefly and calls Kareem to ask for help. He tells her he has a contact who can get Kamran out of the country and that she needs to get him to the harbor by midnight. She agrees but doesn’t get any information regarding who the contact is.

Nakia finds the three of them in the school and Kamala immediately apologizes. They quickly patch things up before Bruno sees that the DODC is at the school. As they band together, Zoey arrives and joins their little rebellious group. Together, they watch Kamala formulate a very Home Alone-like plan, much like she did in episode one. As she does that, Aamir shows up and says their mother sent hi to look after Kamala. She reluctantly allows him to help.

Deever gets orders from Agent Cleary to shut down her pursuit of Kamran and Kamala because of the optics of them raiding a high school. After she hangs up, she refuses his order and sends her men into the school. Meanwhile, Kamala tells Bruno about Kamran’s mother and he urges her not to tell him right now.

DODC breeches the school and the madness begins. The group of kids uses everything from bluetooth speakers and hoodies to fire extinguishers and softballs to slow the agents down. Zoey also live streams to her audience and asks them all to come ot the school to help them.

While hiding from DODC, Kamala and Kamran share moment that almost results in a kiss before Bruno interrupts. He is clearly a bit distraught from what he almost saw but he offers to hold off DODC while they escape. The agents immediately swarm him and take him in. It doesn’t take long for them to get Nakia, Zoey and Aamir as well.

Kamala explains her plan to Kamran and he realizes the friend she has helping them is the Red Daggers. He protests the plan because of his family’s relationship with them and eventually asks about his mother. They’re interrupted though when an agent crashes through the window. Kamran shows no restraint and seemingly tries to kill the agent before Kamala saves him.

Kamran pieces together that his mother is dead and turns to attack DODC. Kamala stops him from hurting anyone and he runs away from her. Meanwhile, outside, the citizens of Jersey City have swarmed the school and are trying to get information from DODC when Kamran breaks through the door. Deever orders him to the ground but he uses his power to begin to glow.

They open fire on Kamran, much to the shock of the crowd and he blocks for a moment before Kamala arrives to protect him. Deever orders the use of a massive sonic cannon, which launches both Kamala and Kamran back as the crowd watches on in horror.

As Deever is about to order a second shot, Kamala whispers “embiggen,” and leaps into action. This is one of her catchphrases of sorts from the comics. Kamala smashes the cannon and is revealed to have giant arms. She then checks on the soldiers in the truck to make sure they’re ok. Kamran fights his way through soldiers but shows no restraint or concern for their wellbeing. Eventually, he launches a car with his powers and Kamala catches it before it hits the crowd of people looking on.

Deever points her gun at Kamran again, which causes an explosion of power from him. As green and yellow hard light fills the area, Kamala fights her way through to him and creates a hard light dome around them. She convinces him that he doesn’t have to follow the path of violence laid out for him by the Clandestines and offers to hold off DODC while he gets to the harbor. He agrees heads down into a tunnel before Kamala removes the dome.

Now out in the open, alone, Deever orders DODC to get her. The people of Jersey City immediately rush to her side and stand between her and DODC. Even the police turn to protect Kamala. The agents still make their way through the crowd to Kamala but she runs away before they get to her. 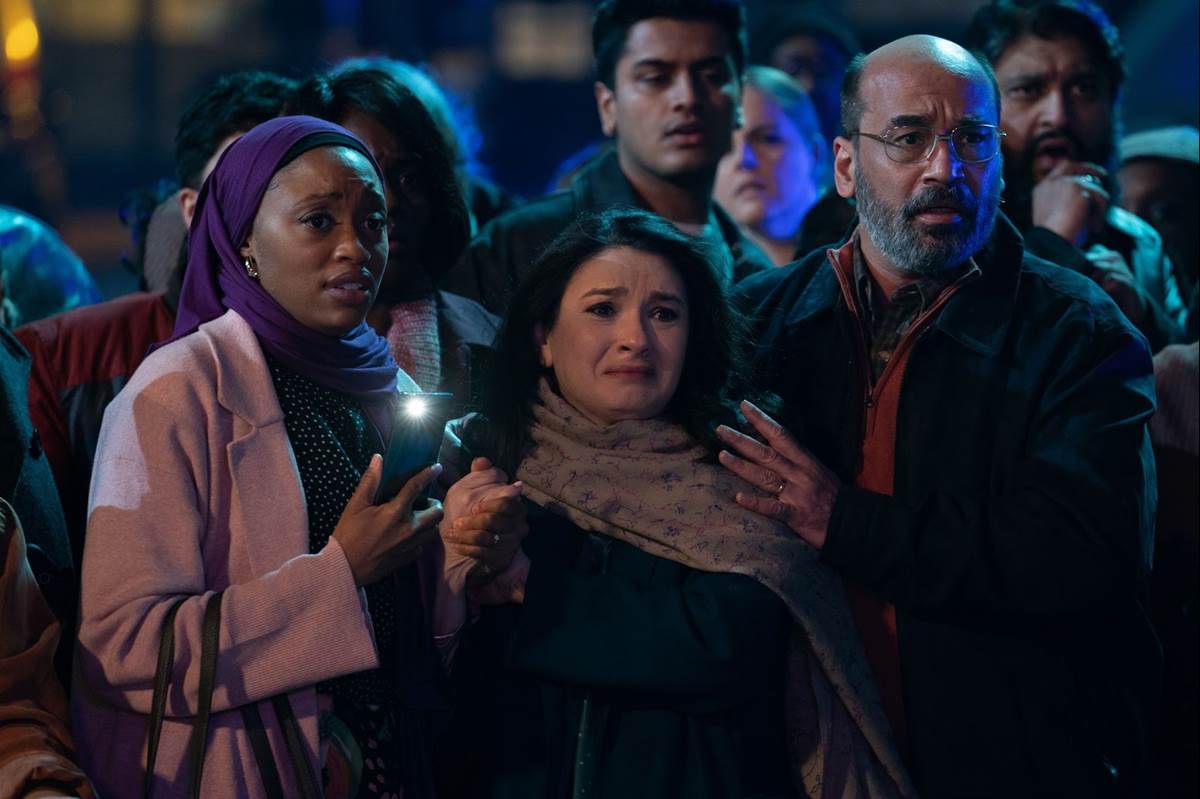 Deever receives a call from Cleary informing her that she’s been fired. Deever’s aggressive attitude toward stopping young enhanced individuals seems to hit to a bigger role for her. Perhaps she will turn out to be a Skrull who was hoping to weaken Earth’s defenses by removing some of their superheroes.

After a series of videos from the people of Jersey City shows their support for their new superhero, Kamala stands alone in her room and admires her new costume in the mirror. Her father finds her sitting on the roof and joins her. She tells him she is still figuring out her superhero name. He explains that she was nothing short of a marvel and even calls her their Ms. Marvel, which of course gets her excited. She takes off into the night and we see the shot of her sitting on the light post, which was taken directly from the comics.

A week later, Kamala meets with Bruno and Nakia. They joke about who gets to keep Kamran’s car before Bruno gives her some important information. It turns out his research of her DNA has revealed that she’s not quite the same as her family and that there is a mutation in her genes. As her tells her, a quick slip of the theme song from X-Men: The Animated Series plays, which is sure to get fans excited. She blows off the news though and the friends drive off.

A mid-credits scene sees Kamala in her room. She notices the bangle start to glow and when she stands to investigate it, she is blown back by some sort of energy and she falls out of frame. When she stands back up, it’s no longer her, but Carol Danvers in her place. She looks around the room at posters of herself and expresses some concern before running off as the episode and season come to a close, but not before we get one last message letting us know that “Ms. Marvel will return in The Marvels.”

This was one of the most satisfying finales for any MCU series to date. Not only did it successfully wrap up all of the storylines, but it also packed a few surprises. There were a few odd editing choices and the unanswered question of Kareem’s contact at the harbor, but overall, it was a great finale.