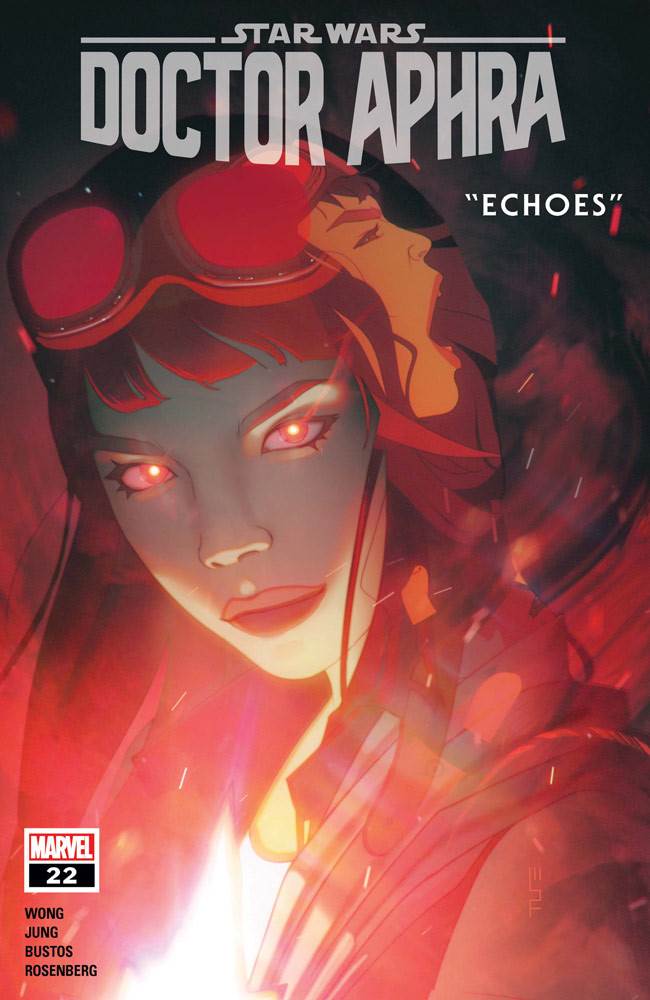 Marvel’s ongoing Star Wars: Doctor Aphra comic book is at its best when it’s at its weirdest / most eccentric, and that’s a big part of the reason why this current “Spark Eternal” arc has won me over.

In last month’s issue, rogue spacefaring archaeologist Dr. Chelli Lona Aphra had been possessed by the above-mentioned ancient piece of technology developed by a dark-side cult known as the Ascendant. And in the 22nd issue of the second volume of Doctor Aphra, Chelli finds herself trapped within her own tragic memories alongside the very familiar-looking personification of the Spark Eternal. 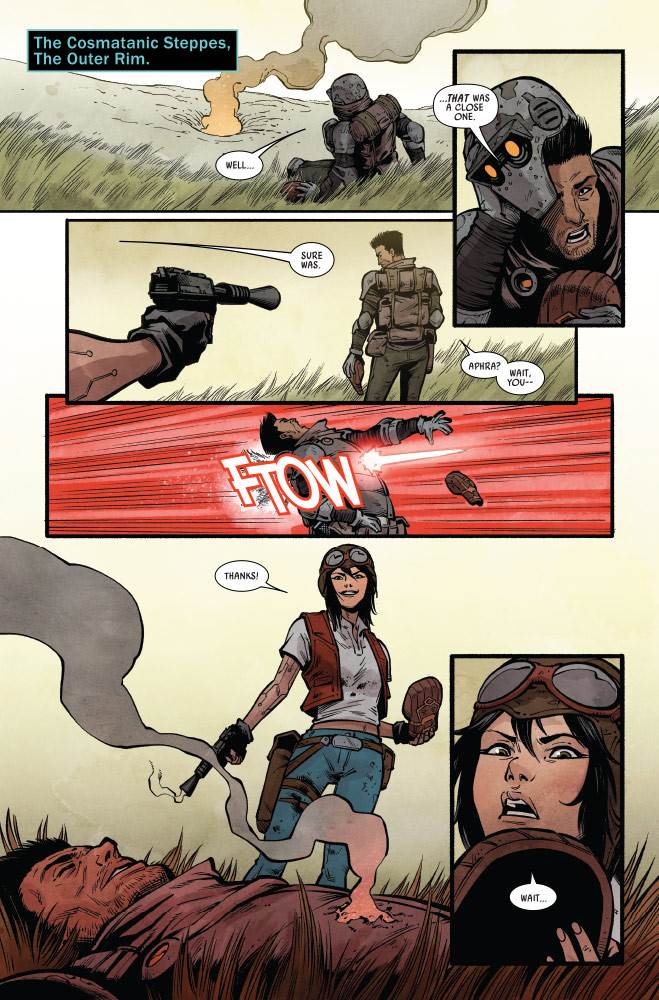 Writer Alyssa Wong starts out Star Wars: Doctor Aphra (2020) #22 at the Cosmatanic Steppes– as depicted in the first volume of this comic– where the title character murders a competitor in cold blood in order to claim an ancient artifact. Then, once Aphra realizes she’s reliving a memory, she begins a back-and-forth with the Spark Eternal itself (in the form of a glowing-eyed doppelganger of Chelli herself) that takes her through a series of painful past events that she’d probably choose not to go through again, if given the option. The mirror-image pair jump from Accresker jail, where Aphra was imprisoned by the Empire and interrogated by a mind-reading Bor, to the planet Sva’leer, where she and assassin Just Lucky race to the top of a crystalline lighthouse as they’re pursued by the Droid Crush. There, Chelli claims another relic, but it’s not the one the Spark Eternal is looking for– the A.I. wants to accumulate more ascendant technology, and for that it has to force Aphra’s mind to revisit Crimson Dawn’s flagship the Vermillion. 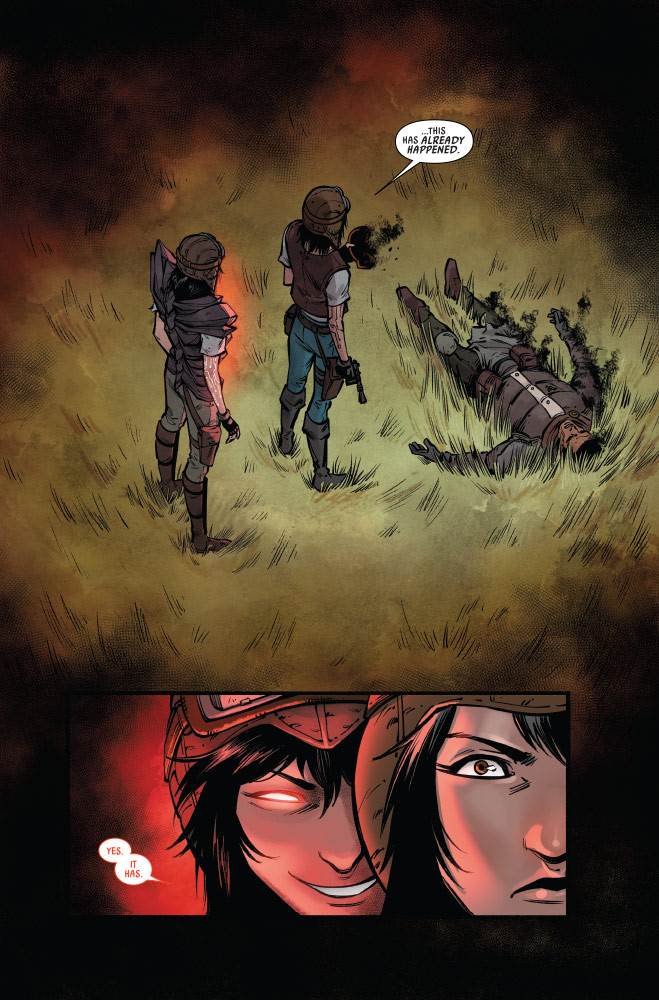 Cutting back to the present-day universe, we see that the Spark Eternal, still in complete control of Dr. Aphra’s real body, brings the archaeologist’s starship the Ark Angel V to the Vermillion in turn. But back in Chelli’s memories, we get additional details about the Ascendant’s history, as Aphra turns the tables on the Spark and witnesses the cult’s final stand against the Sith. Yes, it turns out that the Ascendant was attempting to replicate the dark side not to emulate the Sith, but to fight them, though ultimately they failed. When the last-surviving member of the cult casts an electronic sealing spell to keep the Spark Eternal out of the Sith’s hands, the A.I. reinserts itself back into Chelli’s thoughts, but our antihero is fortunately one step ahead this time. She steers the Spark toward a malevolent force perhaps even more diabolical and dangerous than itself– Aphra’s notorious old “murder droids” Triple-Zero and BT-1. I can’t believe it’s been more than a couple years since we’ve seen those droids in a Doctor Aphra comic book, but I’m thankful Wong has chosen to finally bring them back, as they’re definitely some favorite characters of mine. I can’t wait to see how she and talented current Aphra artist Minkyu Jung breathe new life into such memorable personas. But even if Triple-Zero and BT-1 weren’t coming back, I’d be thrilled by the delightfully strange directions Star Wars: Doctor Aphra has been taking lately. 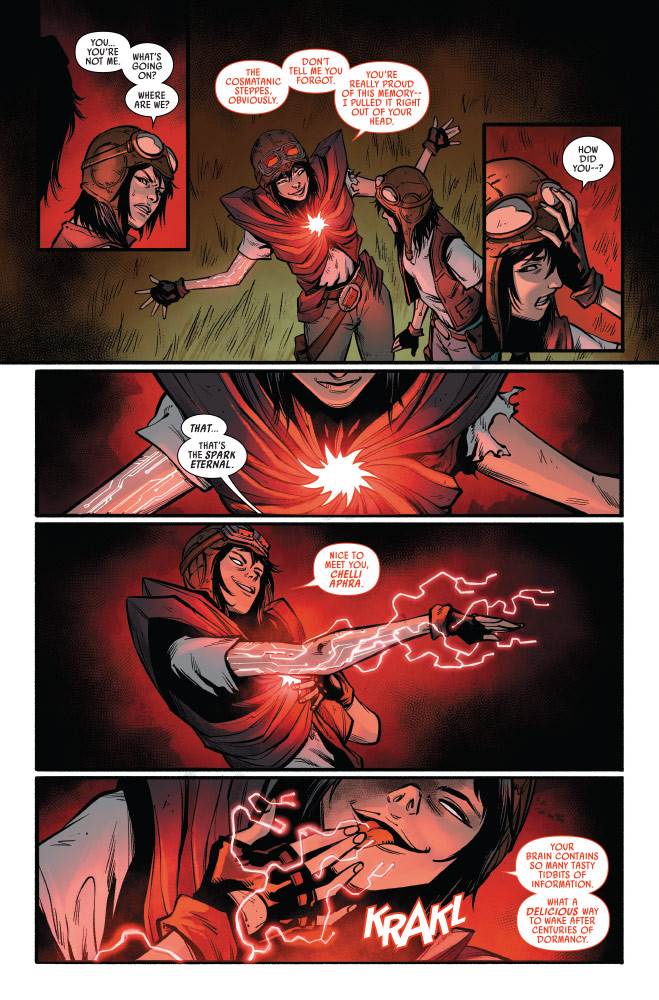