I feel like the current arc of Star Wars: Doctor Aphra (set between the events of The Empire Strikes Back and Return of the Jedi) from Marvel Comics got off to a bit of a slow start, but boy is its climax paying off in dividends.

Doctor Aphra, volume 2, #21 begins where the previous issue left off– with the title character Dr. Chelli Lona Aphra having been fatally impaled through the chest and then possessed by the ancient piece of Ascendant tech known as the Spark Eternal. The dark side-emulating technology then repairs her wound by “stimulating the body’s healing processes” and uses Chelli’s now-fully-functional body to go on a rampage against her ragtag assortment of friends and frenemies who came to the University of Bar’leth with her to track down the highly sought-after Ascendant artifact. Yes, Sana Starros and Kho Phon Farrus are both in imminent danger from the possessed Doctor Aphra, and poor Sava Iglan’tine Nos seems to have met her untimely end thanks to this berserk ancient artificial intelligence. But after a hard-fought battle, Sana and Kho barely manage to escape without being destroyed, taking a couple other pieces of Ascendant tech with them. They’re intercepted by the bounty hunter Boushh (I have to wonder when he’s gonna get his armor taken by Princess Leia, which should be happening around this point in the timeline) and his crew, who take them to Domina Tagge– the wealthy industrialist who sent Aphra and Starros after the Ascendant tech in the first place. Meanwhile at Canto Bight, assassin Just Lucky and his on-again-off-again partner Ariole Yu pool their resources and information to formulate their own plan together instead of following the paths set out for them by either the Sixth Kin or Crimson Dawn criminal organizations. 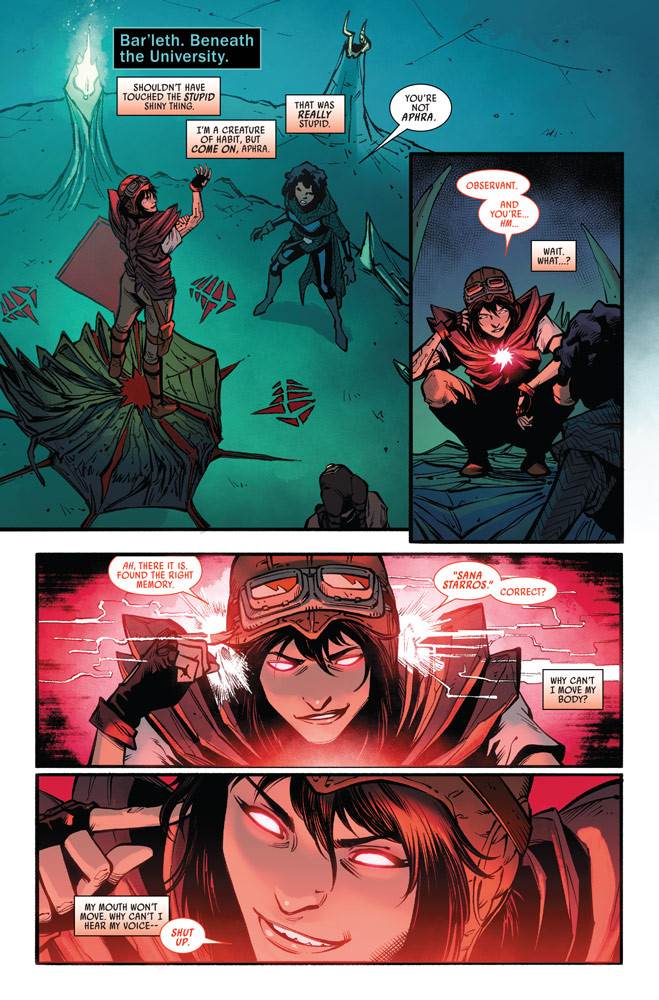 Tagge assigns Sana and Farrus the task of tracking down the possessed Aphra and bringing her back dead or alive, so the unlikely pair set out to contact a number of Chelli’s old acquaintances in the hopes of forming a team that best knows her inclinations and desires. Naturally this means consulting and enlisting a couple of Aphra’s exes, including (SPOILER ALERT) the one that appears on the final page as a cliffhanger leading into the next issue/arc– the Imperial officer turned Rebel Alliance intelligence agent Magna Tolvan, who hasn’t appeared in a Doctor Aphra comic since the end of the previous volume. This particular turn of events is likely to draw applause from the biggest Aphra fans in the Star Wars community, but I just hope it means we’ll be getting more missing-in-action characters back, like the devious droids Triple-Zero and BT-1. In the meantime, I’m just thrilled that writer Alyssa Wong and artist Minkyu Jung have delivered an energetic, exciting conclusion to the Crimson Reign tie-in arc (though Qi’ra and Crimson Dawn’s presence here is minimal at best), and that they also have me pretty jazzed going into the next one. 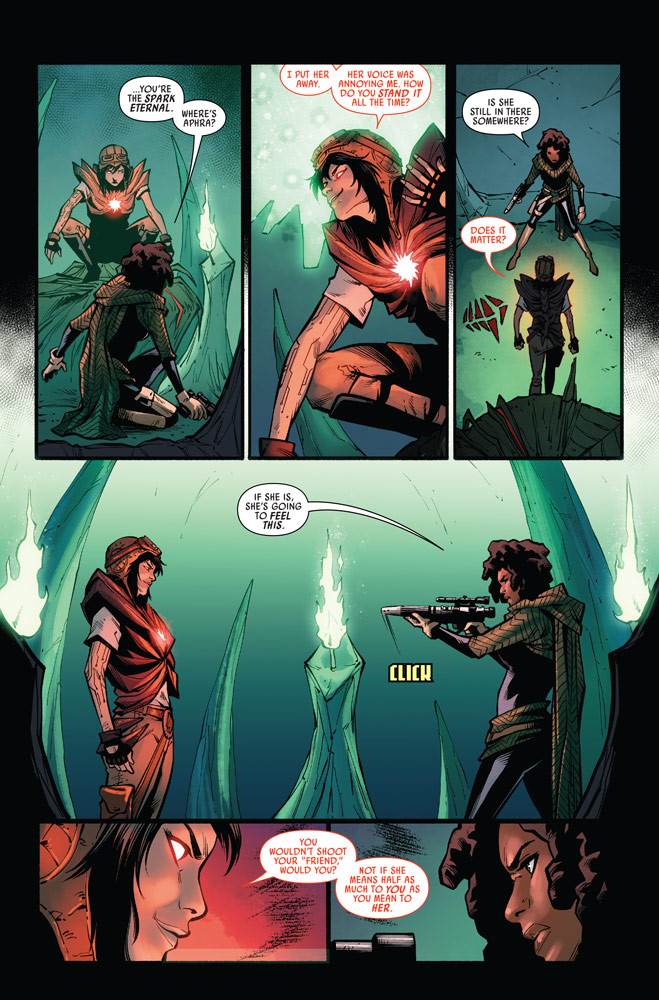