As someone who has never written a comic book script before, I have no idea how much work would have to go into adapting an already-popular, widely acclaimed television series episode by episode and pretty much beat-for-beat. But whether that process is an easy or difficult one (I genuinely couldn’t say either way), writer Rodney Barnes is certainly doing a good job of it for Marvel’s Star Wars: The Mandalorian comic-book series.

The Mandalorian #2, naturally, is a direct translation of the second episode of the smash-hit Disney+ live-action series to the printed page. Barnes has taken all the key moments you remember from that thrilling installment (directed by Rick Famuyiwa) and paced them out appropriately through this issue, maintaining the steady build and excitement of the episode in which we first get to spend a decent amount of time with “The Child.” But the real star of the show here is extremely talented artist Georges Jeanty, whose take on Mandalorian bounty hunter Din Djarin and the-baby-later-revealed-to-be-named-Grogu are full of life and energy, much like the TV series on which this comic is based. I can feel the action as Mando and the Child make their way through the caverns of Arvala-7, and the emotion is undeniably there later in the story when the title character is once again assisted by Kuiil the Ugnaught. There’s very little dialogue in this episode of the show, so of course that means Barnes and Jeanty don’t have much in the way of characters talking to work with. Instead they must make do with largely pantomime action, which is incredibly well-choreographed and makes it as clear to the reader what’s going on as the episode did for viewers. From the confrontation with the Jawas to the battle against the Mudhorn, the various setpieces are all faithfully recreated, and this fruitful creative partnership (plus colorist Rachelle Rosenberg, who is definitely no slouch either) has simply done a wonderful job of capturing The Mandalorian’s spirit. 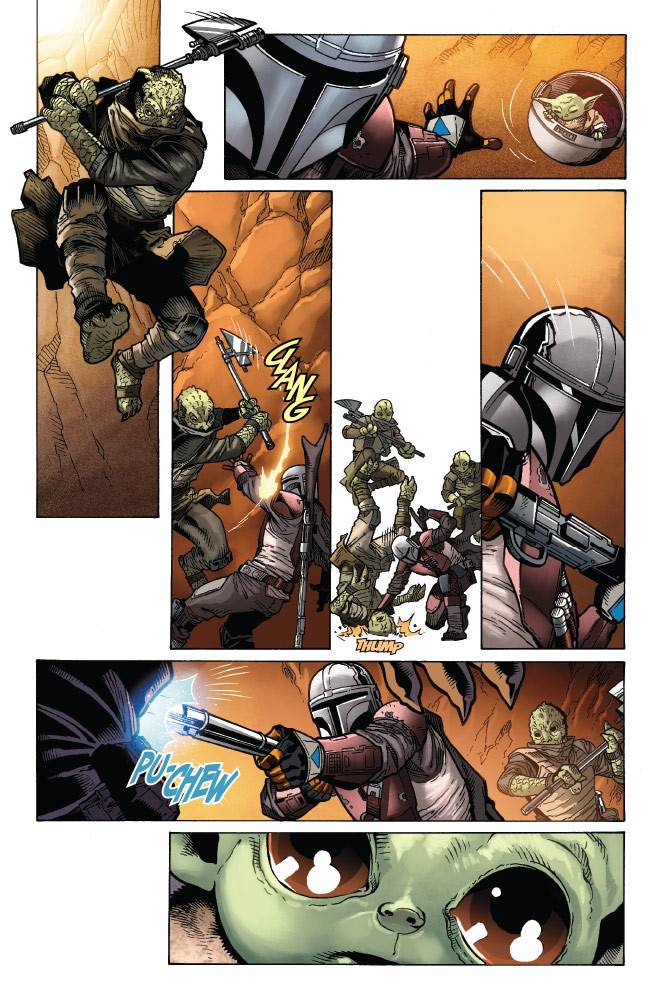 It’s a little strange revisiting The Mandalorian as a series this way, as I’ve already seen the first-season episodes numerous times since they premiered in 2019. I’m so used to this particular story being told in live-action, but I am enjoying getting a fresh perspective on it all the same. And while so far this comic hasn’t done a whole lot to actually add to The Mandalorian’s mythology or narrative beats, I do wonder if that approach may evolve over time. But maybe Rodney Barnes is committed to simply delivering a new interpretation of what we already know and love from the show in comic-book form, and if so I think I’ll enjoy reading along anyway. Like I said last month, I’ve never been much for adaptations of Star Wars tales that first appeared in other media, but The Mandalorian comic may very well be the example that changes my mind. 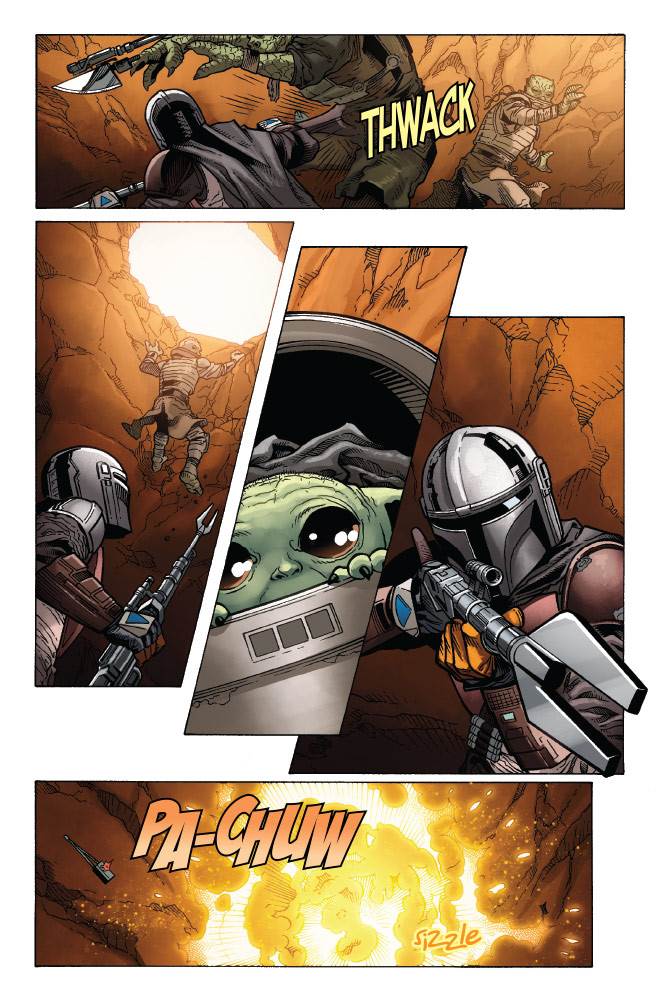 Star Wars: The Mandalorian #2 is available now wherever comic books are sold.