When we last left rogue archaeologist Dr. Chelli Lona Aphra, she had been possessed by an ancient artificial intelligence called the Spark Eternal and had set off to track down more Force-replicating technology developed by an ancient cult known as the Ascendant.

Now, in Star Wars: Doctor Aphra volume 2 #23 from Marvel Comics, the Spark Eternal (still inside Aphra’s body) has found its way to Crimson Dawn’s flagship the Vermillion, where it meets with the enigmatic formerly-human being known as the Archivist. 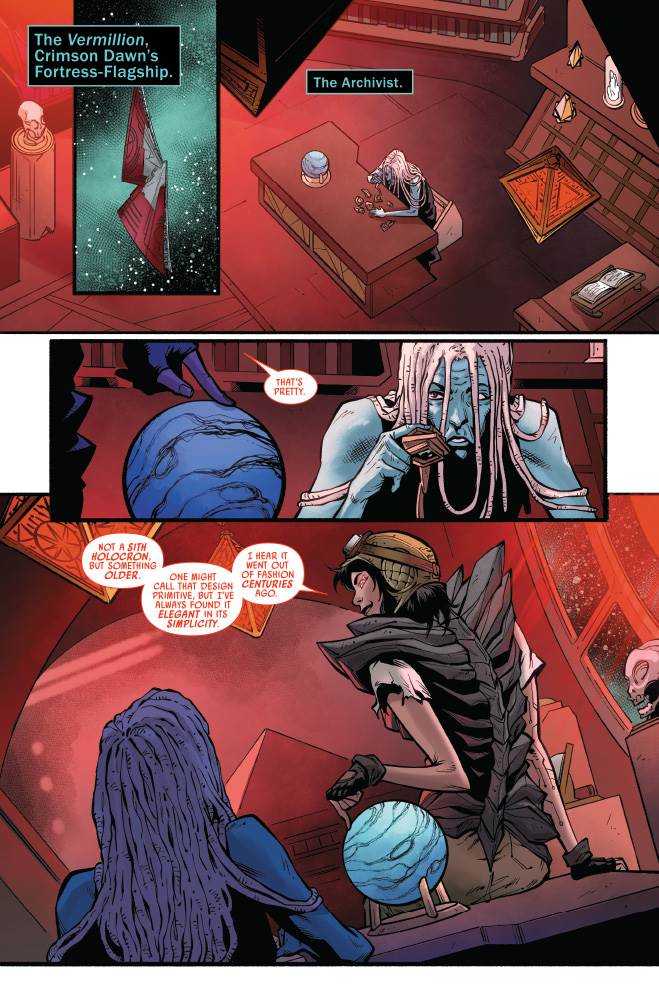 What does the Spark Eternal want? “Everything,” it says. But in a different part of the galaxy, a group of Chelli’s exes, friends, and frenemies have assembled to track her down. Sana Starros approaches the former Imperial officer and Aphra’s ex-girlfriend named Magna Tolvan– now allied with the Rebel Alliance– for help looking for Chelli. There, the other members of this ragtag team are introduced: Eustacia Okka (another ex), Detta Yao (a grad student who recently betrayed Aphra), Korin Aphra (Chelli’s father), and Kho Phon Farrus (a rival archaeologist and murderer obsessed with the Ascendant). Magna reluctantly agrees to join in on this quest, but while boarding Sana’s ship Detta notices a tracking device attached to its hull– and doesn’t bother telling anyone about it. Cut to assassin Just Lucky and his associate Ariole Yu, who are revealed to be the one who planted the device. They’re also tracking Dr. Aphra, but for munitions magnate Ronen Tagge (as opposed to his sister Domina Tagge, who Starros and company are kind of working for as well). Does this all sound complicated? That’s often the fun of the Doctor Aphra comic series, and I have to say I love that there are so many interested parties and supporting players that keep being dragged out of the past for their paths to entwine with the title character’s again. Speaking of characters from the past, this issue ends with a delightful cliffhanger that had me squealing in delight– I won’t spoil it here, but suffice it to say it’s something I’ve been anxiously awaiting since the previous volume of Aphra comics came to an end back in 2019. But before that, we get Sana’s crew exploring a desolate jungle planet and Just Lucky encountering the possessed Aphra on the Vermillion. It’s all terribly exciting, and I love how writer Alyssa Wong has gradually developed the many various subplots to satisfyingly meet together in this arc. The Archivist character is a great “borrow” from Charles Soule’s Star Wars: Crimson Reign miniseries (she’s so perfectly suited to interact with Aphra and friends), and I love Tolvan’s more than understandable hesitance to re-enter this world after having found a home with the rebellion. But that final page really has me counting down the days until we see how all these individually interesting personas bounce off each other once they finally do come together. Until then, I’m just enjoying the ride and looking forward to seeing how Wong and the exceedingly capable artist Minkyu Jung manage to get Dr. Aphra out of this one.