Finally releasing from the Disney Vault, the film that inspired the hit Buzz Lightyear toy line finally comes home on VHS and Betamax… Vintage marketing tease aside, Pixar’s 26th animated feature Lightyear is coming to disc-based physical media on September 13th, specifically 4K Ultra-HD, Blu-Ray, and DVD. The days of analog may be in the past, but the film lovingly pays homage to the push-button cartridge world of the 80s and 90s. 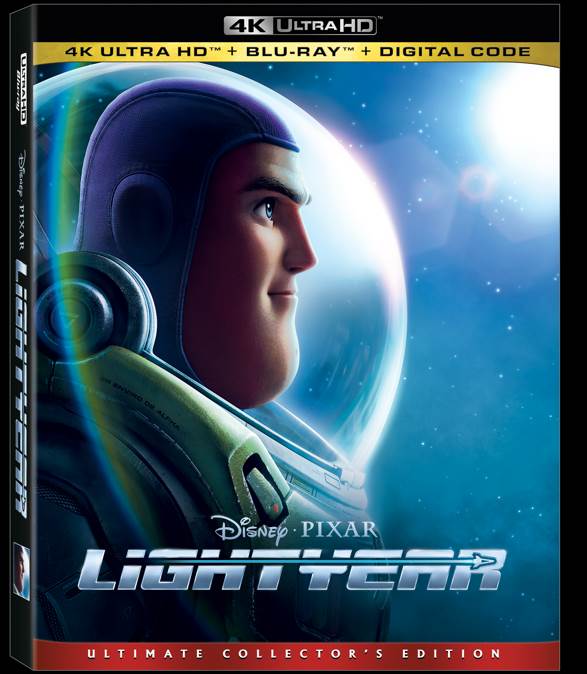 Buzz Lightyear (Chris Evans) is a Space Ranger exploring a new world with his best friend Hawthorne (Uzo Aduba) when a mishap strands the entire crew. Determined to set things right, Buzz becomes a test pilot for a new type of crystallic fusion that could get everyone back home to Earth. However, each test pushes Buzz further into the future through time dilation, finding him in a future where evil robots have taken over, led by a leader named Zurg (James Brolin).

This reverse-engineered Toy Story spin-off may be trying to fit within the small details of Buzz’s story, revealed by the charmingly disillusioned toy voiced by Tim Allen in the original films, but director Angus MacLane manages to craft a meaningful and heartfelt story out of those fragments. The 4K and Blu-Ray releases offer superior image and audio quality for cinephiles, but also takes viewers into the process of making the film through insightful bonus features. Most interestingly, the supplements showcase a lot of deleted concepts for an earlier draft of the film that took the Toy Story 2 throw-away Star Wars joke seriously with Zurg declaring himself to be Buzz Lightyear’s father.

With a supporting cast of characters that includes the instantly lovable robo-cat SOX (voiced by Pixar’s own Peter Sohn), Lightyear strikes a tone that is nostalgic for adults of a certain age but also exciting and fun for younger audiences. The film may be available to stream anytime on Disney+, but if you’re a big fan of the film, this home media release gives you a few reasons to devote some shelf space to Lightyear.

The 4K/Blu-Ray/Digital Ultimate Collector’s Edition release presents the film in its original 2.39:1 theatrical aspect ratio (the IMAX Enhanced version remains exclusive to Disney+). The Blu-Ray looks incredible while the 4K disc offers theatrical quality in terms of color spectrum and detail. After watching the bonus features (only on the Blu-Ray disc) about how much care went into the making of the film, you’ll find yourself truly appreciating all of the talent and technical skill required to pull off every pixel.

The 4K disc automatically starts with a 7.1.4 Dolby Atmos mix that uses the full soundscape to put you in the center of the action. Aimed at a younger audience, the mix uses less subwoofer than you would expect from a sci-fi film. Other audio options on the 4K disc include Pixar’s own English mixes in 5.1 and 2.0, a descriptive audio stereo mix, and French and Spanish 7.1. The Blu-Ray includes the same options, minus the Dolby Atmos mix and trimming the French and Spanish tracks down to 5.1.

Lightyear comes housed in a standard black 4K Blu-Ray case with disc holders on each side of the interior. Both discs feature artwork, with Buzz and SOX on the Blu-Ray disc and Zurg on the 4K disc. Inserts include a digital copy code redeemable through Movies Anywhere (and for points on Disney Movie Insiders), a flier for Disney Movie Club, and a flier for Disney+. An embossed slipcover is included with the initial pressing.

The Blu-Ray disc opens with an ad for the 35-minute Disney+ promotional feature Beyond Infinity: Buzz and the Journey to Lightyear, a curious choice as this piece was conceived to sell Disney+ subscribers on going to movie theaters to see the film you just bought. The menu on both discs pulls up an animated Star Command computer screen from the film, with menu options included in the design.

If you loved Lightyear, then the chance to own the film on physical media and put it alongside Pixar’s other incredible films will be an easy decision. Those on the fence about bringing home this release should note that the bonus features, while seemingly light at first, are rich with insightful information about the care and attention to detail that went into this Buzz Lightyear origin story.