If you love all things cute and cuddly, then “The World of Duffy & Friends Revealed” was the D23 Expo panel for you. One of the final panels of the weekend, the panel was moderated by Carlye Wisel who invited along the creative team behind Duffy, ShellieMay, Gelatoni, StellaLou, CookieAnn, ‘Olu Mel, and the newest character, LinaBell. Imagineers present were Daniel Jue (Portfolio Creative Executive),  Eva Lee (Senior Manager – Franchise Development), and Charlie Watanabe (Senior Story Editor and Global Writer – Duffy & Friends). As a fan of Duffy before he even had a name (when he was simply called “The Disney Bear”), the most intriguing part of the panel was an overview of each character’s personality. When you purchase a plush of Duffy or one of his six friends, a card contains a short story that introduces them. But what you don’t necessarily see in that short story is the way in which each friend compliments each other and adds value to the group. “Iyashi is the next umami,” Charlie said about a uniquely Japanese source of inspiration for the entire Duffy and Friends line. A little bit of history, The Disney Bear wasn’t a big success when the line debuted at Disneyland and Walt Disney World in the early 2000s. In 2004, Disney decided to introduce the character at the Tokyo Disney Resort, but they did something a little differently this time. Rather than nameless bears sold in a variety of colors, he was given a name, offered in just one style, and given a backstory that connected him to the American Waterfront land in Tokyo DisneySea. The launch was a big success and a surprising thing happened. Guests weren’t just buying their Duffy bear, they were taking him with them on all their adventures and dressing him in handmade clothes. A sensation was born.

Back to the concept of Iyashi, the word doesn’t have a literal English translation, but belongs to the feelings of calm, comfort, and healing. It regained prominence in Japan following the economic recession of the late 80s. Scientists have researched the emotional benefits of owning a pet and Iyashi is one of the reasons you find so many cat and dog cafes in Japan, places where people who can’t own pets can go to get that serotonin release. The same effect occurs when Guests hold their Duffy facing out, sharing their day in the park with their bear, or one of Duffy’s friends.

Franchise Development Manager Eva Lee discussed the care and research that has gone into each new character added in the nearly two decades since Duffy’s official launch in 2004. They’re in no hurry to introduce new characters, as they are focused on making sure any new friends of Duffy compliment the characters they already have and their unique personalities and traits. When designing a character for this line, they have to not only stand on their own, but also fit in with the rest of the group. And when it comes to creating new outfits for the character’s, their individual personalities must be evident in what they wear. LinaBell’s launch in September 2021 at Shanghai Disneyland and was an instant sensation, with lines to bring a plush home stretching out of the park on her debut. She recently became available at Tokyo DisneySea and Hong Kong Disneyland where she has been greeted with a similar embrace. For D23 Expo attendees, she made her U.S. debut at the D23 Expo Marketplace before heading to Aulani, a Disney Resort & Spa. In addition to plush, Expo attendees could bring home a keychain, purse, and backpack with Duffy’s newest friend on them. 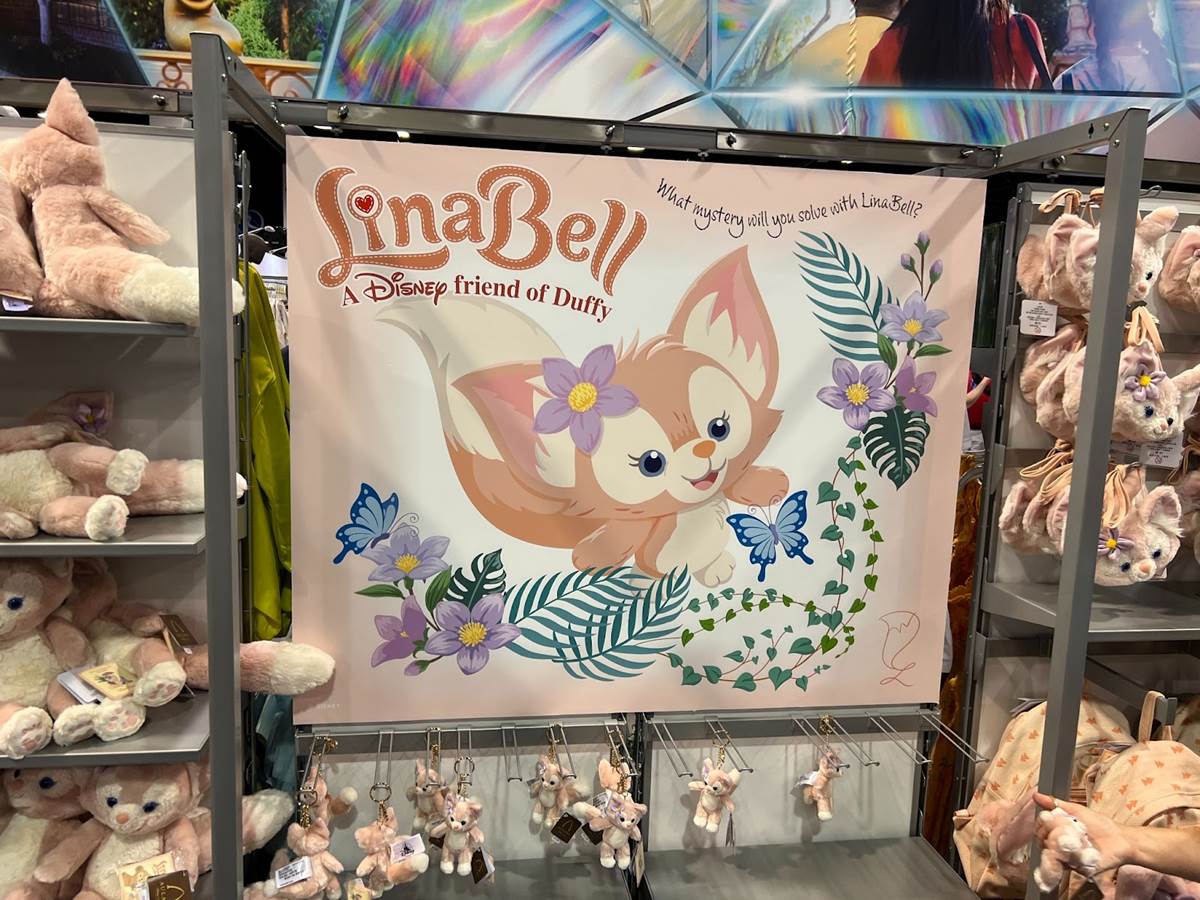 The biggest buzz concerning Duffy & Friends was the announcement of a 6 episode short-form series coming to Disney+. These shorts will use stop-motion animation and will be similar to the web shorts that have been released so far. We got to see a total of three web shorts during the panel: “Morning Glory,” “Duffy & Friends Welcome LinaBell,” and “Lunchbox Mystery.” The first two shorts (embedded below) are already available, while the third made its debut at the D23 Expo and will stream online in the future. Charlie writes these shorts and does so with dialogue, although Duffy and his friends don’t speak with words, just like when you meet them in a Disney Park. 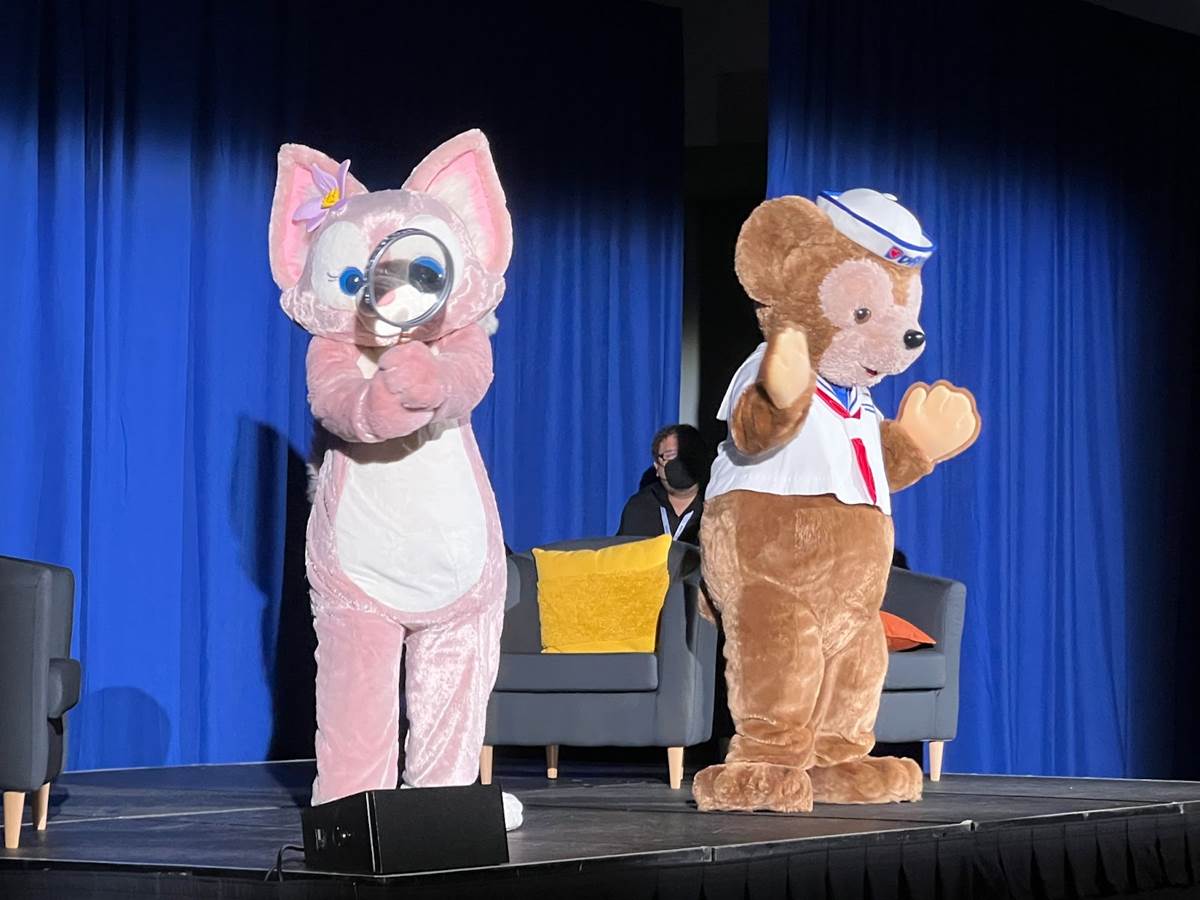 Speaking of the parks, it turns out that Duffy and his friends don’t know about them. Portfolio Creative Executive Daniel Jue explained that each character is from a fantastical version of our world, so you won’t find them mixing with other IP (there was no mention of the fact that in Duffy and ShellieMay’s domestic launch, most of the costumes sold for them found them dressing as other well-known Disney characters). Duffy isn’t from the American Waterfront land in Tokyo DisneySea, but a fictional version of Cape Cod. Similarly, CookieAnn’s backstory has her hailing from Main Street U.S.A., a land that doesn’t even exist in Hong Kong Disneyland, where she debuted. It felt a little bit like hearing that Hello Kitty isn’t a cat (look it up). After stoppy by the stage to wave goodbye, D23 Expo attendees were given a reusable tote with a stitched heart that brands you as “A Disney Friend of Duffy.” Each bag included two randomly selected buttons and almost instantly, attendees were trading for their favorites. After learning about their personalities, it was fitting that each button has the core value of their character on them. I traded for Duffy and CookieAnn, my two favorties in the line. “Care for Others” and “Embrace Differences.”