The show’s main recurring villains are loose once again while a resident in the apartment building will clearly not be getting his deposit back on the sixth episode of Hamster & Gretel. 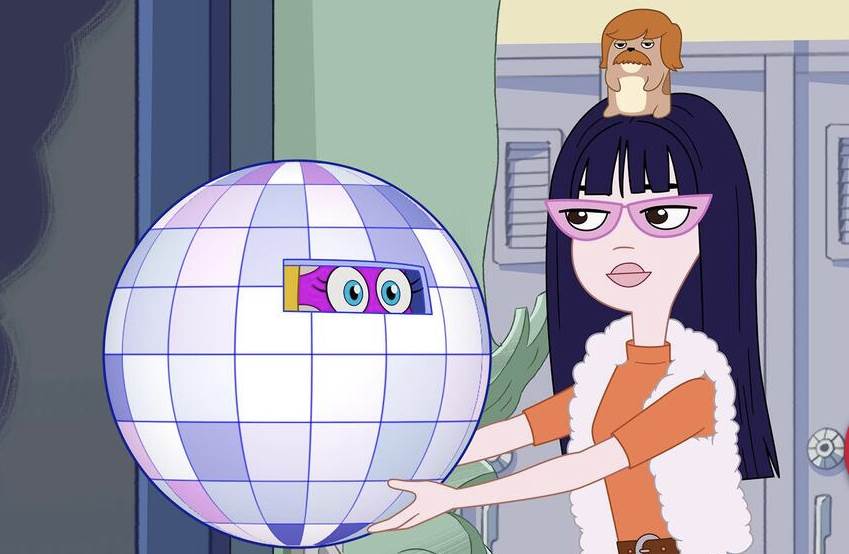 It’s the Homecoming dance at Kevin’s High School, and it has a 70s theme. For some reason however, Fred (short for Winifred, which I think we learn for the first time) is crowned homecoming queen, which she abdicates almost immediately.

Kevin also sees the dance as a chance to rebrand himself as something other than the “minivan kid,” and learns a bunch of dances from a series of youtube-esque videos hosted by a guy named Darren. Is this a reference to Darren’s Dance Grooves? Those videos from the late 90s/early ‘00s?! Maybe. Unconfirmed at this time.

We cut to the local prison where Fistpuncher and The Destructress have just broken out of their cell and are on the lookout for some kind of celebration. Immediately, thanks to social media, The Destructress finds a local high school (Kevin’s) that is throwing a 70’s themed dance that they can crash– quite literally.

At the dance, Kevin is trying to rebrand himself and comes across his crush, Hiromi, who is also festively dressed for the occasion and knows her 70’s era dance moves.

A local news report while Fred and Gretel are playing video games alerts the pair that a duo of villains has broken into a 70s themed costume shop and stole costumes, leading them to the fact that Kevin and the dance are in trouble. They can’t make a scene and ruin Kevin’s big night, so they rush off in disguise.

The evil pair shows up and starts live updating their social media as they wreck the place when Kevin points out that if they truly want to go viral, then they need to stop breaking things and take part in a dance battle. Hiromi backs him up, and the two pairs dance battle during this episode's musical number. Fred, Hamster and Gretel arrive in costume and realize they are too late, even though Kevin is currently in the midst of the dance battle. Fortunately for him though, he is quite in sync with Hiromi when they discover they both learned dances from the same video series.

Kevin and Hiromi win the battle, but as predicted, The Destructress and Fistpuncher don’t leave as they agreed to. Hamster and Gretel take off into the fight, while Fred helps everyone out of the building while they cheer her on, much to her chagrin. She has been one of the most popular kids in school since her earlier save-the-day moment on the cheerleading squad.

The school’s principal said the homecoming dance has been canceled when Kevin forgoes his rebranding efforts and pulls up in his minivan with a loud sound system in tow, starting the party once again outside. Thanks to Gretel’s floating Disco ball disguise, Hamster with a flashlight, and even the UFO that gave everyone their powers, the lighting keeps the party going.

It’s career day at Gretel’s elementary school and thanks to some immersive gameplay and other presentations, it’s pretty exciting. Except for Gretel’s dad, who’s career isn’t nearly as glamorous as he is just manager and superintendent of an apartment complex.

As part of the project, she has to spend a day going to work with her dad, which again, is not that exciting. Given that Gretel is a superhero, the day is especially boring as they get the “emergency” call to fix a broken refrigerator.

However, in the apartment a mad scientist who was let go from the city’s aquarium, and he is concocting a monstrous eel in his living room. Covering it up though, since it's a clear violation of his rental agreement, the two walk by suspicious, but none the wiser while they go take a look at the fridge.

In the living room, the Eel is complete. Gretel and Hamster go take a look and realize the whole revenge scheme and enter into battle with the eel. It seems all is lost when Gretel is reminded of her lessons from her dad about the fridge: hot makes cold, you just need the right tool. So she and Hamster come up with a scheme to take a fridge part into the eel tank and freeze the eel. Hamster flies out with the eel, and Gretel helps take care of the last of the fridge. Hamster dropped and shattered the eel (off screen, telling Gretel he took it to a farm, upstate. I don’t think we’ll see that Eel again.

This episode of Hamster & Gretel is now on Disney Channel and the DisneyNOW app. You can also catch up with earlier episodes on Disney+.