Kevin’s dog has made him famous, but he also steals the show with an unnecessarily elaborate slapstick routine in this week’s Hamster & Gretel. 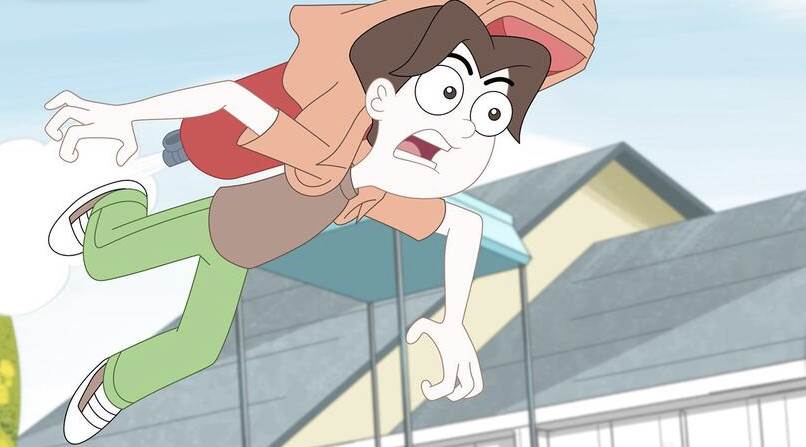 The Opposite of Smart

Kevin and Fred are playing video games when his dog Churro is being dumb and they decide to film it, calling it “the opposite of smart.” The video has gone completely viral and Kevin has become quite famous. Even when out with the family, people keep saying his line.

However, the newfound fame starts occupying his time, especially while they try to shoot more videos featuring Churro. Now, Gretel feels pushed aside and dejected as her older brother makes this his primary focus. Gretel tries to get his attention with the help of a musical number. To no avail.

Kevin and Churro get invited to PuppyCon and have to prepare. Gretel offers to be his assistance but learns that a new supervillain is on the loose and stealing influencer dogs at various conventions. Of course, Kevin doesn’t believe this, thinking the timing is just a bit too perfect and convenient for a reason for Gretel to show up.

At the convention, they are placed next to a chihuahua, “the opposite of big,” that can Irish step dance. As everyone is looking at the step dancing, the Dognapper strikes and steals churro. The neighbor booth and his chihuahua rush out to help Kevin chase down the villain.

Spoiler alert— it’s Hamster and Gretel in disguise. They end up in a bamboo warehouse, entering into a martial arts showdown that leads to the arrest of the Dognapper.

Kevin realizes the error in his ways and spends more time getting ice cream with Gretel and Churro, opting to save some of the dumb moments for the two of them in lieu of sharing them on the internet.

Jumping right into the episode, we kick off a musical number telling us that it’s Bailey’s birthday today. That said, there is also a poorly named supervillain on the loose, The Party Pooper. He is going around destroying birthday parties and thanks to a little bit of research, Kevin and Gretel conclude that it’s this angry looking clown who has appeared at every party that has been destroyed thus far.

Oh no! The angry clown is at the birthday party! And double Oh No!, so is Hiromi! She’s doing the face painting and Kevin’s confidence has been shaken as he tries to get all the kids inside while they investigate the angry clown. Unfortunately, there's not a lot to investigate. They turn their back on him for a second and think the clown is making a run for it, but they stop him at his van and discover that he is carving out his own brand as the angry clown. He’s actually quite friendly and jovial.

While chasing the clown though, the party was destroyed while Bailey and others were inside opening gifts. All the evidence points to the bouncy castle, so Gretel climbs inside to investigate when the netted doors zip themselves up trapping her inside. The bouncy castle is alive! But how?

Cut away to the alien ship that is bestowing powers accidentally giving them to the bouncy castle while one of the aliens spills orange juice.

Set to destroy kids parties, trampling them the same way the kids trample on him, the bouncy castle is out for revenge. Easily enough, Kevin just unplugs the fan that keeps him inflated. Still alive, the castle cannot open the doors that serve as his mouth or he’ll lose his air. They need to make the castle laugh. Cue the angry clown. Tragically, in one of the best lines of the series so far, he’s “less of a ha-ha clown but more of a life is pain clown.”

However, one of the most elaborately choreographed slapstick sequences ensues, including jokes directed at Florida, a misnomer marriage, and an eventual pie in the face finally get the castle to erupt in laughter. Freeing Gretel and Hamster with little additional effort to defeat the villain.

Thanks to a convenient ice sculpture, Bailey was also greeted by Hamster and Gretel on her birthday and Gretel was there to hear about it immediately afterward.

And, luckily for Kevin, Hiromi was impressed by his comedic antics with the grumpy clown. Best Birthday ever?

This episode of Hamster & Gretel is now available on Disney Channel and the DisneyNOW app. You can catch up with earlier episodes on Disney+.