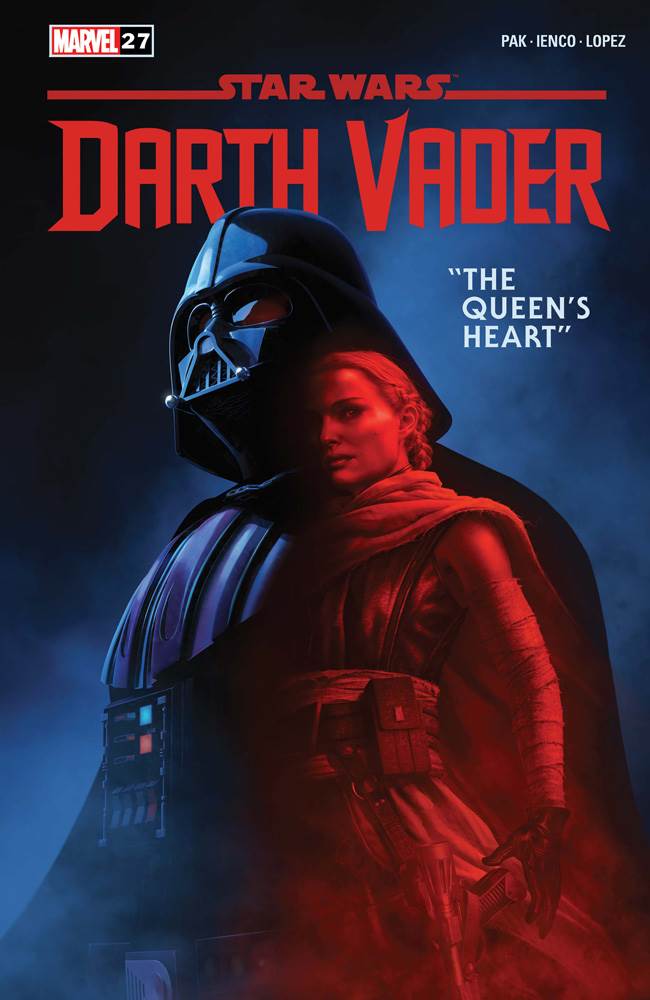 In the current arc of Star Wars: Darth Vader from Marvel Comics, the Dark Lord of the Sith and his somewhat reluctant allies Sabé (former handmaiden of Padmé Amidala) and Ochi of Bestoon have traveled to the planet Gabredor III to track down and eliminate another Imperial traitor working for the criminal organization known as Crimson Dawn.

This traitor, named Governor Tauntaza, is decimating a community made up of freed slaves from Tatooine– including Anakin Skywalker’s old friends Wald and Kitster– and she’s got a “Death Machine” that’s capable of turning Gabredor III into another near-inhospitable desert planet. 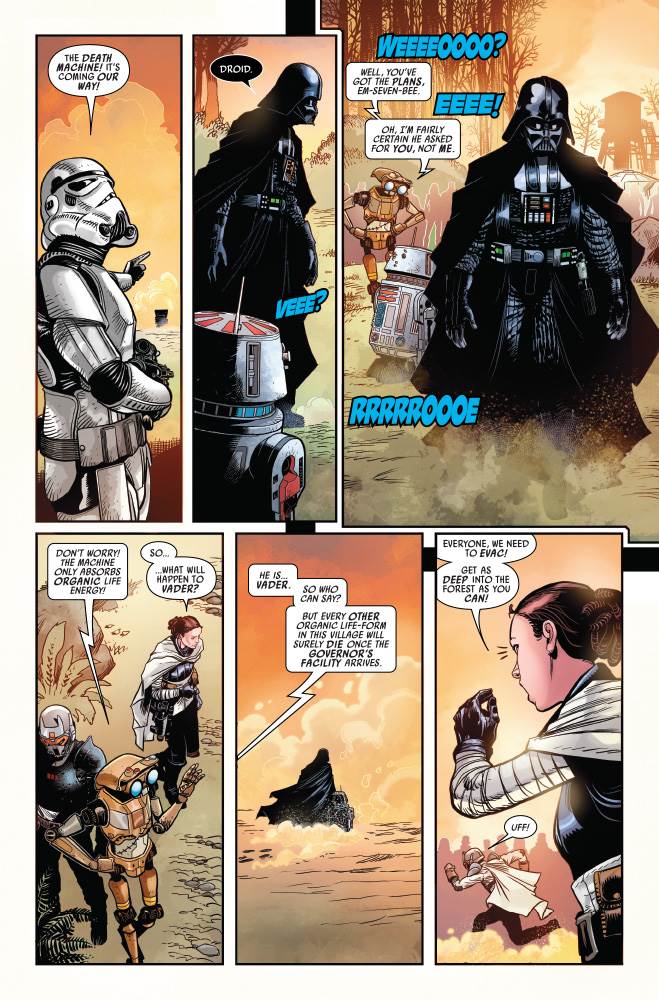 Ostensibly Vader is there to kill Tauntaza, but the fact that he can (and almost seems willing to) help Wald and Kitster’s fledgling society along the way points to a potential for Anakin to still do some good, even in this dark form. There’s just one problem, however: this Death Machine appears almost impenetrable, with Admiral Piett firing down upon it from Vader’s orbiting star destroyer with no apparent effect whatsoever. It’s lucky for Vader and company, then, that they have a couple of handy droid companions along for the ride. The astromech known as M-7B (using ZED-6-7 as translator) slices into a databank and retrieves the behemoth’s schematics, thereby revealing a weakness on its underside. Then the poor astro droid is enlisted as a literal slicer, with Vader leading him out into the sandstorm, concealing his lightsaber in his torso, and sending him under the machine to do some damage. It’s a clever plan, but I couldn’t help but wonder why Vader couldn’t just throw his lightsaber under there using the Force– I guess it’s implied that organic beings are weakened even from standing near the deadly machine. 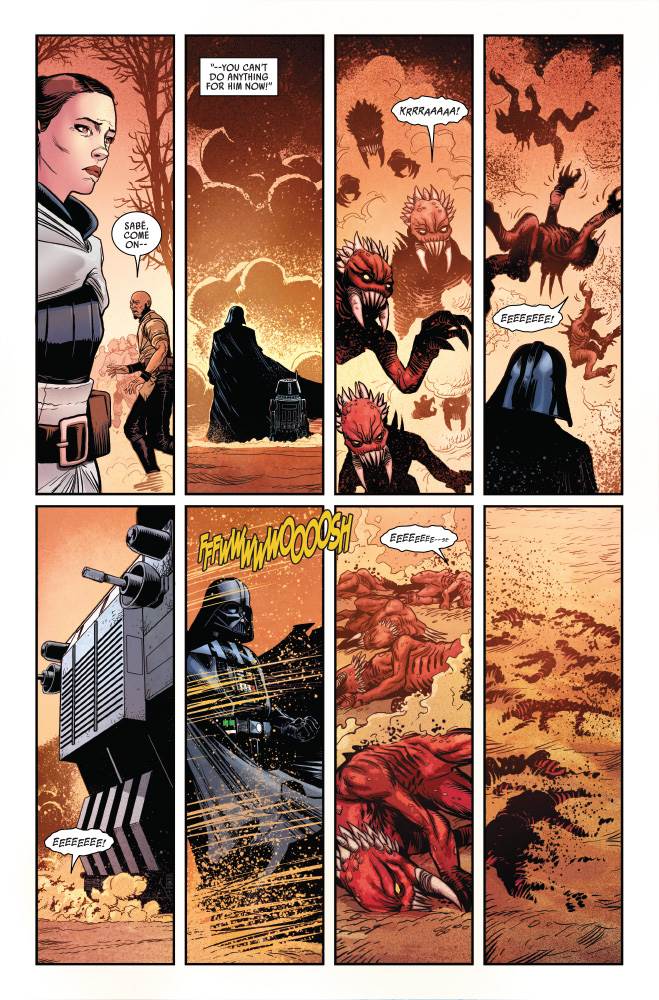 Anyway, this issue culminates in another standoff between Darth Vader and Governor Tauntaza, but the real interesting thing here is its outcome, and the reveal that (SPOILER ALERT) Emperor Palpatine may have been pulling the strings on both sides once again. Not only that, but there’s a pretty interesting turn of events with Sabé deciding to save Vader from certain doom because she remembered Padmé’s vow that there’s still some good in him. This is a pretty major change of heart for her considering their history, and I’m terribly curious to see where the unlikely allyship between these two characters (who should by all means be at odds with each other) is leading. There’s been a lot going on in the pages of Star Wars: Darth Vader, but I think writer Greg Pak and artist Raffaele Ienco are still doing a great job in keeping things manageable and compelling as this title leads up to the climactic Star Wars: Hidden Empire crossover due out from Marvel this fall. It’s fairly impressive to me that this talented creative team was able to bring Sabé back as a featured character during this run, not to mention make her a key player in Vader’s life during this time period leading up to the events of Return of the Jedi. And what about the fate of Tauntaza? I’m guessing time will tell. 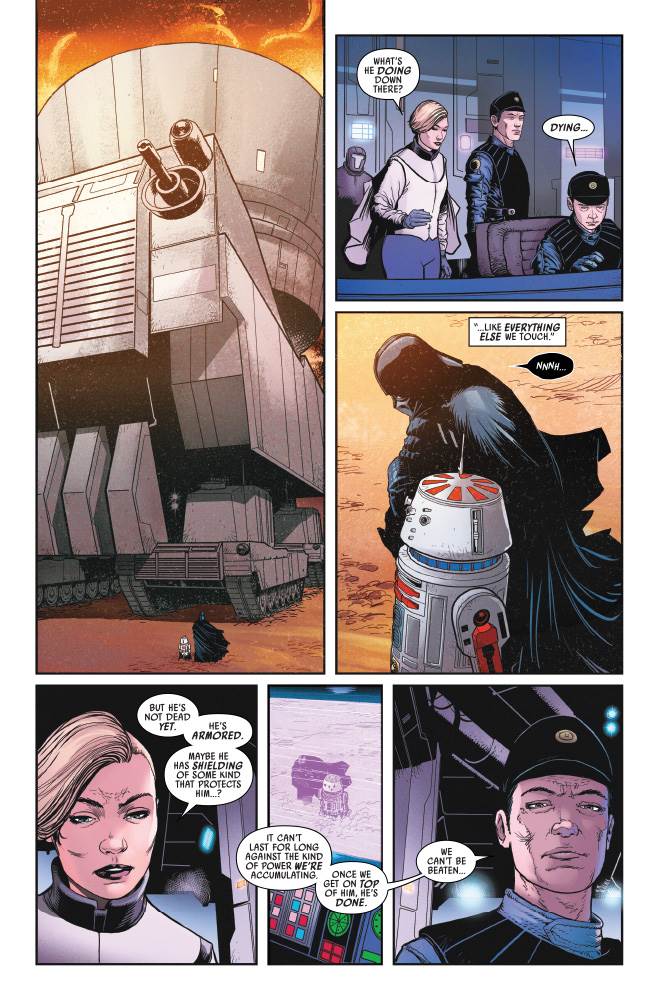