Anakin Skywalker hates sand. It’s more than just a line from Star Wars: Episode II – Attack of the Clones. In the 20 years since that movie was released, this bit of character information has indeed become a meme unto itself, repeated by fans ad nauseum both online and in cosplay form.

And now, thanks to the current arc of Marvel’s Star Wars: Darth Vader comic book written by Greg Pak, Anakin’s hatred of sand has evolved into its own multi-part storyline concerning the Dark Lord of the Sith set in-between the events of The Empire Strikes Back and Return of the Jedi. 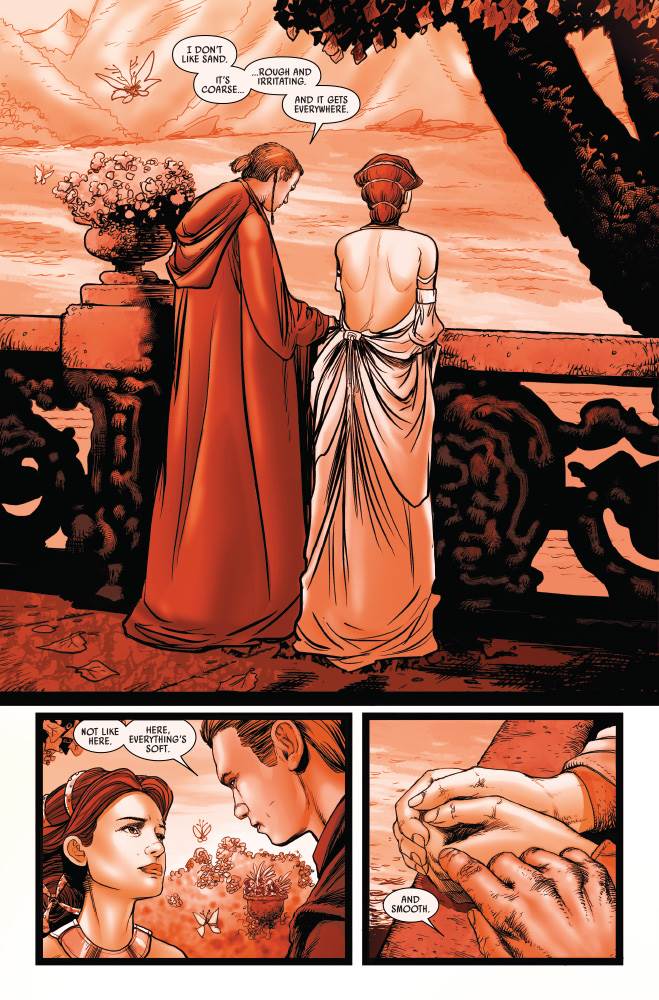 Issue #20 of Star Wars: Darth Vader’s third volume begins on the planet Gabredor III, where Vader has accompanied Padmé Amidala’s former handmaiden Sabé to help a colony of former slaves. Among this group are Wald and Kitster, Anakin’s childhood friends, the latter of whom has constructed his own podracer on this planet far from Tatooine. And Wald warns Vader that the machine is far too dangerous to drive in a raging sandstorm (see the previous issue), but the Sith Lord Formerly Known As Anakin Skywalker knows his own skills behind the yokes of a podracer. He steers the vehicle out into the desert to where Sabé is trapped, flashing back to relevant scenes from the prequel trilogy the entire way. We see Anakin and Padmé having that infamous conversation on Naboo, we see a much younger Anakin firing up his personal podracer engine in Mos Espa, and we see a new flashback to a sandstorm in which Annie refuses to leave his mother Shmi behind. There’s also a similarly red-tinted look at the pivotal scene in the Jedi Council chamber on Coruscant from Star Wars: Episode I – The Phantom Menace, in which Master Yoda tells young Anakin he is afraid to lose his mother. 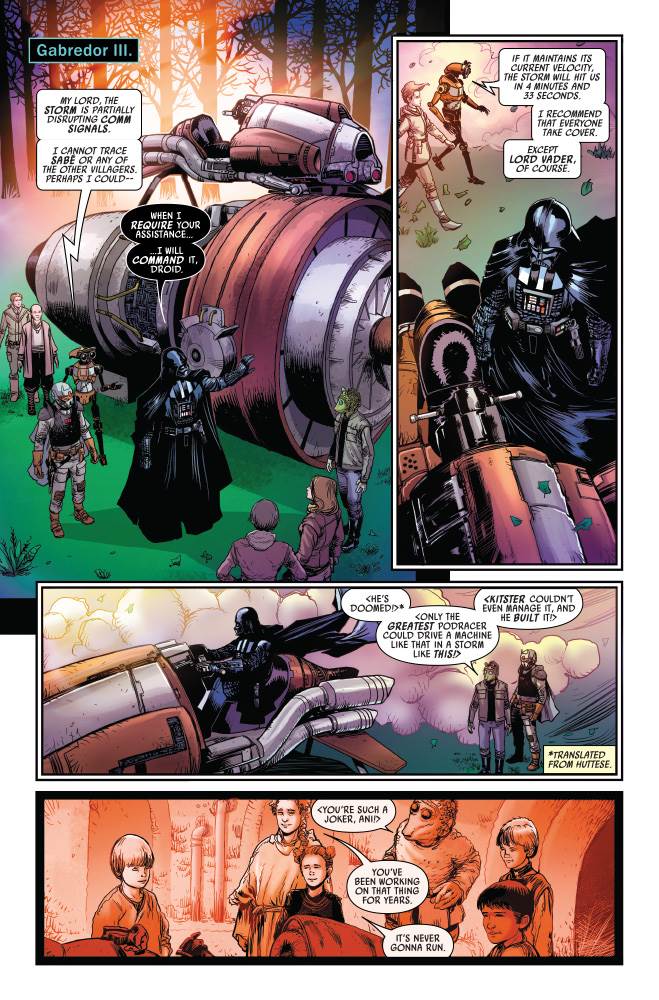 It all adds up thematically to what Pak is going for here, but it does feel a little like these flashbacks have become overused in this title in lieu of filling its pages with fresher content. I haven’t even mentioned the scenes from Attack of the Clones at the Tusken Raider camp and during the Battle of Geonosis, but when we finally do cut back to Vader arriving at the location where Sabé has fallen, we start to understand what it all means when put together. For better or worse, Vader has seemingly found a hint of companionship again in Sabé, and he’s willing to go through hell to prevent losing her in the way he lost both his mother and wife. But the final page here is really where it gets interesting– Emperor Palpatine, working from the shadows once again, is apparently intent on disallowing Vader even this one minor personal victory. And despite the overreliance on flashbacks to material that we’ve (mostly) seen before in other media, I think Darth Vader # 26 is an effective issue with a tantalizing ending that has me clamoring to find out what happens next. I can’t fathom Vader’s pseudo-alliance with Sabé being permitted to go on for too much longer, but it’s been such a major part of this title’s run that it’s hard for me to imagine what could be coming after it. No matter what, I still have a tremendous amount of faith that Greg Pak and artist Raffaele Ienco will deliver something interesting and worthwhile over the coming months.