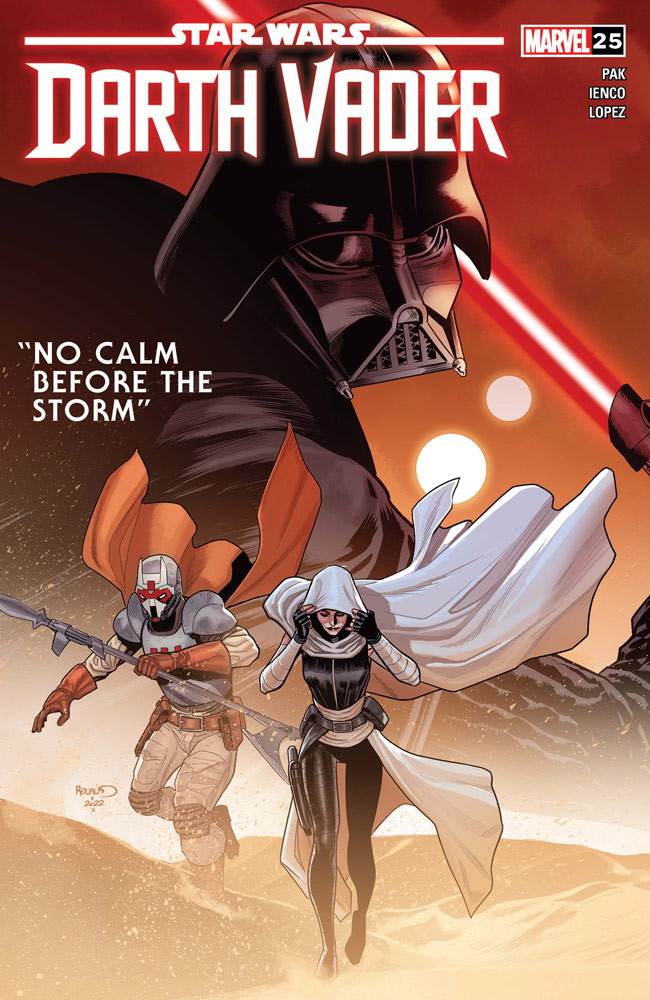 There have been plenty of jokes about Anakin Skywalker’s hatred of sand in the 20 years since the release of Star Wars: Episode II – Attack of the Clones, but up until last week we’ve never seen him have to go head-to-head with a giant man-made sandstorm.

In issue #25 of the third volume of Star Wars: Darth Vader from Marvel Comics (released last Wednesday), the Dark Lord of the Sith previously known as Jedi Knight Anakin Skywalker finds himself in the midst of a conflict between a community of ex-slaves from Tatooine and a rogue Imperial governor under the thumb of the shrewd criminal organization Crimson Dawn. 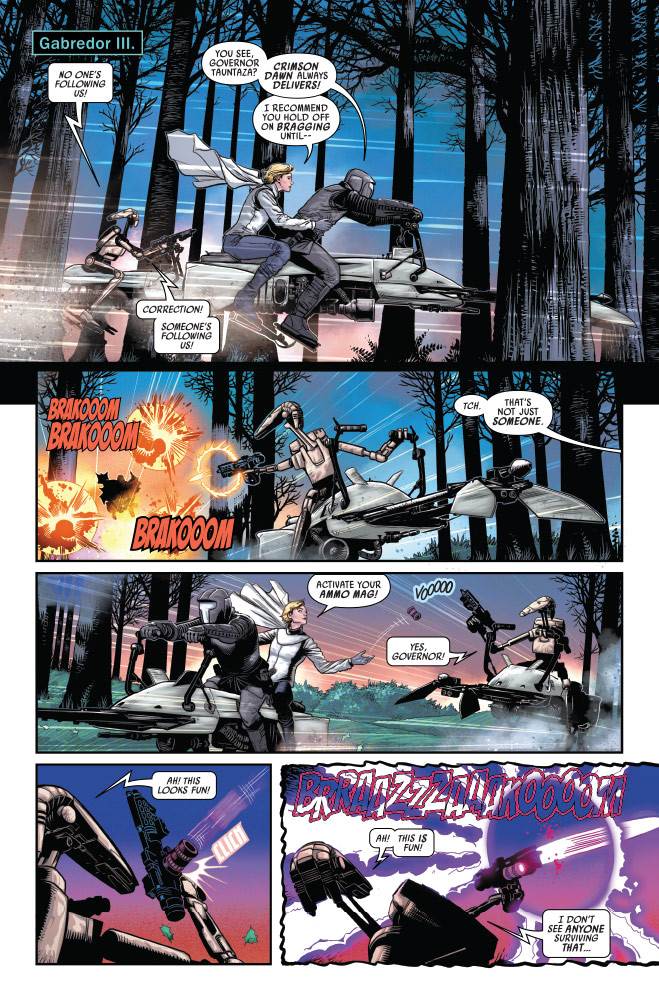 Darth Vader #25 begins with the title character chasing Governor Tauntaza and her various underlings in a fast-paced speeder bike chase. Eventually they attempt to flee in a TIE shuttle, and its twin ion engines prove powerful enough to escape Vader’s dark-side Force grasp– contrasting what we saw Vader accomplish in the Star Wars: Obi-Wan Kenobi live-action TV series on Disney+. Vader follows the governor up to her Star Destroyer and basically wipes out her entire command, though she manages to slip through his gloved fingers. Meanwhile on the surface of planet Gabredor III, Sith assassin Ochi of Bestoon and former Naboo handmaiden Sabé attempt to figure out how Tauntaza was draining energy from this world that served as home for the Tatooine refugees like Kitster and Wald. Eventually, with the assistance of forensics droid ZED-6-7, they deduce that the governor has been utilizing a giant weather-control device to generate an enormous sandstorm full of lightning. 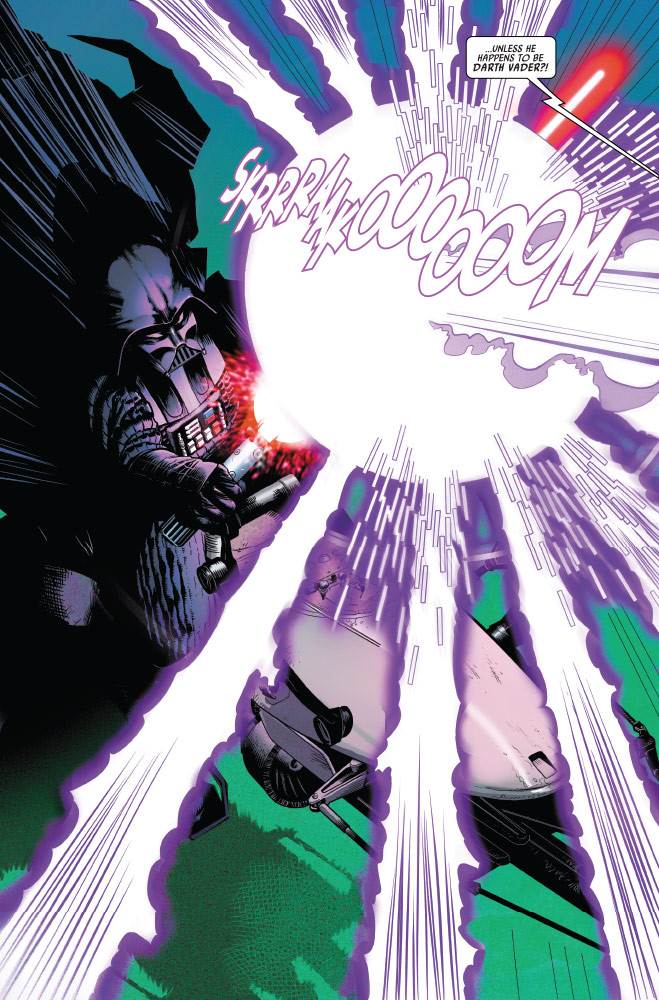 The paths of all these characters converge on a humongous machine running in the planet’s wastelands, as Vader follows through on his pursuit of the wayward governor and Sabé, Ochi, and Kitster team up to try and put a stop to the devastating storm. A couple of obvious fake-out deaths aside, this is a pretty thrilling sequence of events for the Darth Vader comic, and the ongoing collaboration between accomplished writer Greg Pak and skilled artist Raffaele Ienco continues to be a fruitful one. I loved the nods to Anakin’s previous life that got dropped here and there, especially the implication of the final page, which sure makes it seem like the Dark Lord might be taking up his old hobby of podracing once again in the next issue. All of this plot, of course, is a continuation of the narrative established in the recently concluded Star Wars: Crimson Reign crossover event, and I remain curious to see where all of it is headed when it comes to the crime syndicate currently controlled by Han Solo’s duplicitous ex-girlfriend Qi’ra. It should theoretically all come to a head in the forthcoming Star Wars: The Hidden Empire miniseries this fall, so until then I’ll carry on enjoying the many twisted entanglements Crimson Dawn has fostered across the galaxy. 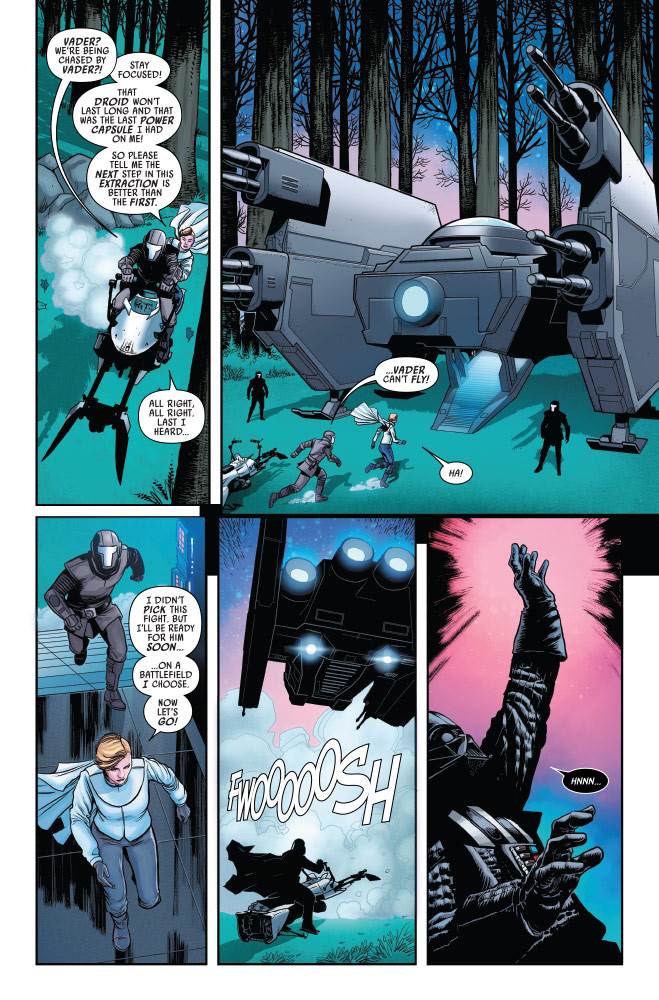