Star Wars: Crimson Reign may have come to a conclusion as a Marvel Comics miniseries event last week, but the effects of the crossover are still being felt in individual titles such as the third volume of Star Wars: Darth Vader, issue #24 of which came out on Wednesday.

Darth Vader #24 begins with the title character having temporarily allied himself with former handmaiden Sabé, Sith assassin Ochi of Bestoon, and a community led by Anakin Skywalker’s old friends from Tatooine Kitster and Wald in an effort to go up against Crimson Dawn infiltrators among Imperial ranks on the planet Gabredor III. Sabé wants nothing more than to take out the local Imperial governor, whose forces are keeping this community of freed slaves under their oppressive thumb. But the governor still has captives from that group on her ship, and she’s been experimenting with some kind of life-draining technology in an abandoned science colony elsewhere on the planet’s surface. The team invades that compound, succeeding in rescuing the prisoners, but the governor and her lackeys strike back with their energy tech, leaving Vader stunned. Ochi swoops in to protect his master, letting the governor escape at the same time. And all of this talk of planet-draining energy weapons starts to give the Sith Lord flashbacks to when Grand Moff Tarkin blew up the planet Alderaan, memories he begins to conflate with the confrontation with his wife Padmé on Mustafar. Vader starts to have visions of encasing Sabé inside his own meditation chamber, partnered with an inner monologue about how the handmaiden believes she is drawing Anakin back to the light side of the Force, when really she is enabling his further downfall in the exact opposite direction. 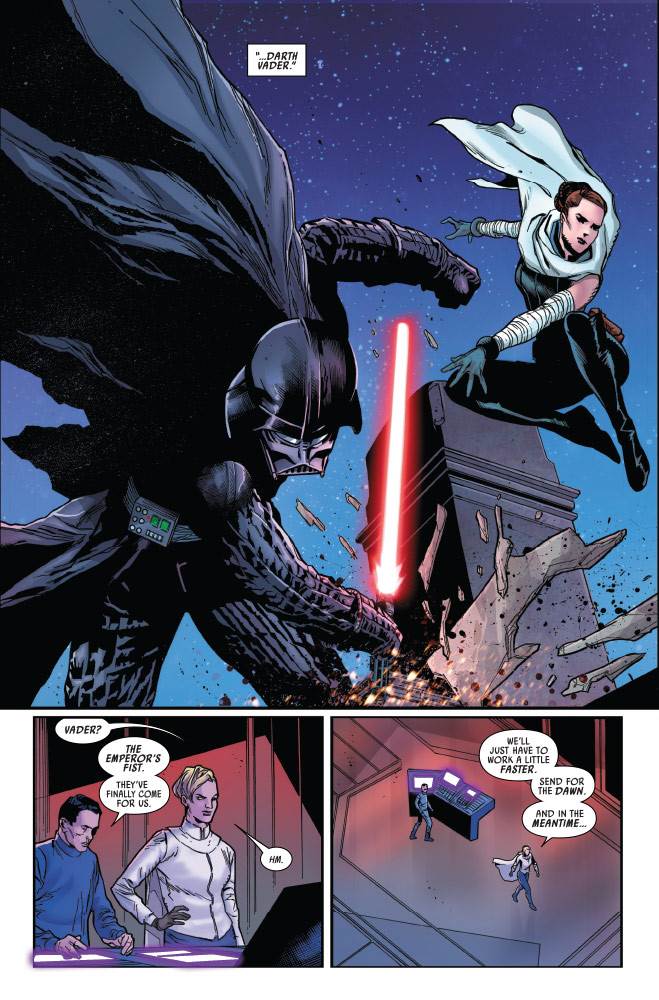 I think writer Greg Pak and artist Marco Castiello have been doing a terrific job on the Star Wars: Darth Vader comic lately, but I’m starting to feel like I’m ready for this story arc to be over. Now that Sabé knows Vader’s true identity and has used that knowledge as leverage to get him to assist her, what more is there really to do with that character? Of course we don’t quite know Sabé’s fate after this point in the larger timeline, so it will be interesting to eventually see where she ends up, but I’m hoping that story beat comes sooner rather than later so the Dark Lord can move onto other, perhaps more interesting things. The interplay between Vader, Sabé, and Ochi has been fun, but if the strained relationship / uneasy alliance between that trio goes on for much longer I could see Pak running out of innovative ways to bounce them off each other. I am glad to see that Vader isn’t really becoming a “good guy,” even temporarily, as I’m not sure that would make a whole lot of sense for the character at this juncture. But I fear that his inevitable reveal to Sabé that he’s been misleading her may come across as hollow, since we’ve seen that betrayal play out a number of times before, even in this comic. Still, I have enough faith in this title’s creative team that I’m willing to put my reluctance aside and look forward to wherever this narrative is going in the future. 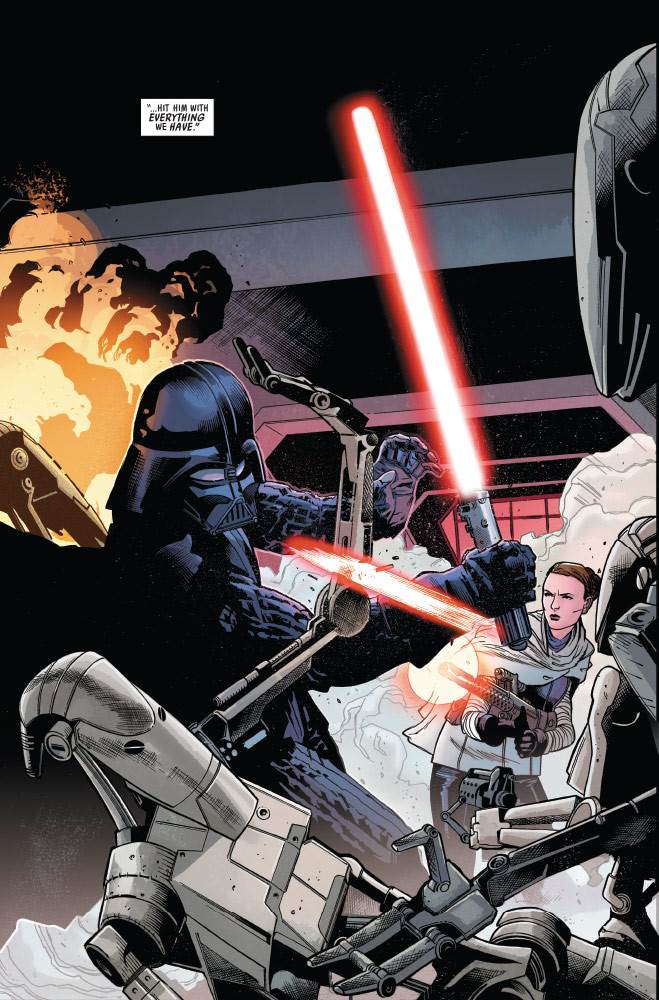